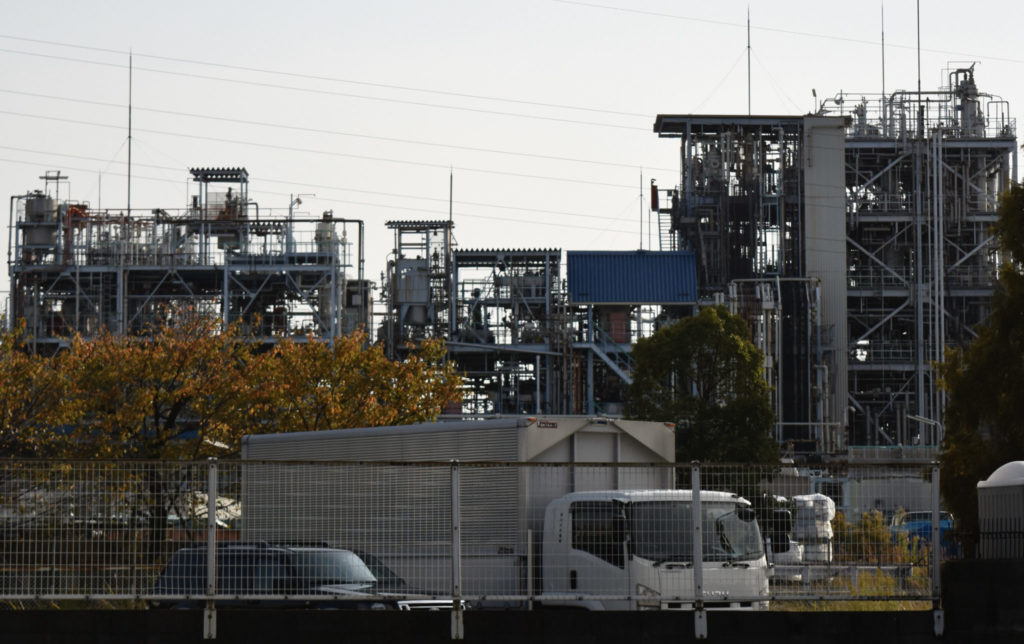 On March 29, 2022, the city council of Settsu, Osaka Prefecture, unanimously endorsed a written statement requesting the national government to take action regarding PFOA pollution around Daikin Industries’ Yodogawa Plant. Settsu citizens have also formed a group that aims to address the pollution. On April 4, 2022, they submitted a petition with 1,565 signatures to the mayor, demanding that the city and Daikin work to solve the problem.

Although Daikin has supported Settsu’s local economy for decades — thereby making it difficult to speak out against the company — both citizens and local leaders are finally taking action.

This article is a digest summarizing our previous reporting, including what PFOA is, how awareness of its dangers grew globally, and how Daikin and government bodies are addressing PFOA pollution in Settsu.

PFOA stands for perfluorooctanoic acid. First developed in the 1930s, it’s a type of organofluorine compound. Although useful in repelling water and oil, it’s slow to break down.

The American chemical manufacturer DuPont used PFOA in Teflon coating, such as for its non-stick frying pans, which first became popular in the 1950s. PFOA was also used in other everyday products, including rice cooker pots, water-repellent clothing, and hamburger wrappers.

In Japan, Daikin also manufactured the chemical, growing to become one of the world’s eight largest PFOA manufacturers.

Despite PFOA’s usefulness as a water and oil repellant, the chemical’s harmful effects started becoming apparent in the 1960s, particularly in the United States. If ingested, the chemical remains in the body and can cause serious health impacts.

Animal studies found that PFOA could cause organ malfunction and the birth of underweight offspring. A 1978 experiment conducted on monkeys by DuPont and another PFOA manufacturer called 3M found that the monkeys given the experiment’s highest concentration of PFOA died within a month.

In 1993, researchers at the University of Minnesota found a causal relationship between PFOA exposure and prostate cancer. In 2000, the U.S. Environmental Protection Agency (EPA) put out its first warning about PFOA’s harmful effects on health.

In 2002, 3M, which had been a top PFOA manufacturer, stopped producing the chemical.

Around that time, Kyoto University Professor Akio Koizumi, a trained doctor and specialist on the health effects of industrial pollution, recognized the dangers of PFOA in Japan.

Beginning in 2002, Koizumi led a Kyoto University research team to investigate PFOA concentrations in water, air, and blood throughout Japan. They found the highest concentrations in the Kyoto-Osaka-Kobe area.

According to their measurements, a tributary of the Yodogawa River in Osaka contained the highest known concentration of PFOA in the world. A survey of 60 women showed that their blood contained an average of 6.5 times more PFOA than the norm as well.

The research team hypothesized that Daikin’s Yodogawa plant in Settsu City was causing the pollution.

Eight of the world’s major fluorochemical manufacturers, including Daikin, agreed to phase out PFOA by 2015, following a 2006 call by the EPA for them to stop manufacturing the chemical.

In 2019, PFOA was added to the Stockholm Convention on Persistent Organic Pollutants, which Japan is party to, as a substance that must be eliminated. Persistent organic pollutants are toxic chemicals that can negatively impact human health and are slow to break down in the environment or in bodies.

Following PFOA’s addition to the Stockholm Convention, in May 2020 Japan’s Ministry of the Environment set a target value for PFOA in water: 50 nanograms per liter for the total amount of PFOA and related chemical PFOS.

The following month, the ministry released the results of a survey of PFOA concentrations in groundwater and rivers across Japan. Groundwater in Settsu City had the highest level: 1,812 nanograms per liter, 36 times the target value.

The highest concentration in a second nationwide survey, released by the Ministry of the Environment in June 2021, was found near Daikin’s Yodogawa Plant in Settsu: 5,500 nanograms per liter, 110 times the target value.

In October 2021, Japan’s Ministry of Economy, Trade and Industry banned the production and import of PFOA. However, products containing PFOA have not been recalled, and awareness of the chemical’s dangers is still low among the general public.

The Osaka prefectural government, in addition to the Kyoto University research team, has acknowledged that Daikin’s Yodogawa Plant is the source of PFOA pollution in the area.

The company, however, insists that it is “one possible source” of the pollution and has refused to help remove PFOA from contaminated areas.

PFOA is highly toxic, causing cancer and organ damage and affecting the health of mothers and children. Once ingested, it accumulates in the body, causing long-lasting effects.

Why is Daikin avoiding responsibility? 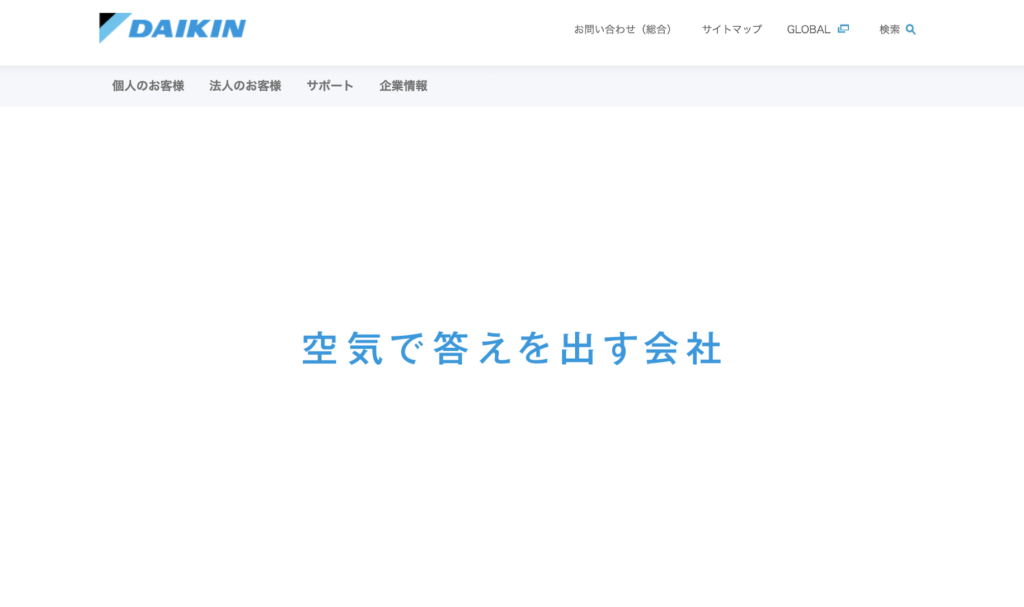 “A company that answers with air” — Daikin promotes its air conditioner business on its website.

Daikin and PFOA, 1941–1960: From munitions manufacturer to DuPont wannabe

Originally, the area around Daikin’s Yodogawa Plant was a farming village. Most residents earned their living selling rice and vegetables grown in their fields.

In 1941, Osaka Metalworking Industries (the predecessor of Daikin) built a large munitions factory in the town.

Japan was at war, and the company had been ordered by the Japanese navy to manufacture chlorofluorocarbons, which were necessary for cooling aircraft and food stores. A chemical plant was opened on the factory grounds in 1942.

After the war, Daikin continued its fluorochemical business with the goal of “catching up with and overtaking” leading American chemical manufacturer DuPont. It began manufacturing PFOA in the late 1960s.

Although Daikin’s fluorochemical business flourished, it caused frequent pollution in the surrounding community, with fluorine gas leaks occurring in 1955 and 1963. Local farmers had marched on the plant in protest following the latter.

In June 1971, in response to a string of pollution incidents, Daikin established an internal pollution prevention committee. But incidents continued, with a 1973 fluorine gas leak reaching as far as neighboring Higashiyodogawa Ward in Osaka City and forcing 340 households to evacuate.

Spearheaded by the community affairs section, Daikin held an annual Bon Dance Festival and bus tours for residents. The company, as well as its affiliates and suppliers, employs many local residents, and the local government benefits through tax revenue. Over the years, it became increasingly difficult to speak out about pollution.

Daikin and PFOA, 1978–2007: Even when American manufacturers pulled out, business as usual at Daikin

As explained above, PFOA’s negative health impacts gradually became known. In 2002, 3M stopped manufacturing the chemical. Daikin had imported PFOA from 3M and was a leading PFOA manufacturer in its own right. It’s unthinkable that Daikin would not have heard about the chemical’s dangers.

However, Noriyuki Inoue, by then Daikin’s president, expressed his enthusiasm for strengthening the company’s fluorochemical business in a 2002 interview with the magazine “examiner.”

“In our current, highly competitive era where companies either make it or bust, especially in the air-conditioning and fluorochemical businesses, Daikin will fall among the latter if we aren’t number one or number two in the world,” he said.

As PFOA pollution around the Yodogawa Plant became known thanks to the Kyoto University research team, in September 2007 Takeshi Miyahara, then a member of the Osaka prefectural assembly, questioned then Governor Fusae Ota about the prefecture’s slow response to Daikin at an assembly session.

Ota responded, “We are taking a leading role in the PFOA issue.”

However, Miyahara suspected that Governor Ota was going soft on Daikin. Inoue, by then Daikin’s chairman, also led a supporters’ group for Ota. Daikin had been supporting Ota’s political activities by purchasing the groups’ fundraising party tickets to the tune of 1 million yen (about $8,700) in multiple years.

Daikin and PFOA, 2007–2009: Daikin refused to inform citizens about extent of pollution

In response to questions from Tansa, Ota denied that Inoue and Daikin’s support had any impact on the prefecture’s response to PFOA pollution.

Even if true, the Osaka prefectural government was lenient with Daikin for years. Minutes from closed-door meetings, obtained by Tansa through freedom of information requests and other reporting, contained the following exchange between Daikin executives and the prefecture’s business guidance and environmental protection sections at a November 2007 meeting.

Prefectural government officials conducting the hearing questioned Daikin about the level of PFOA emissions. However, Daikin refused to disclose the information, calling it “confidential business information.” The prefecture did not ask any further questions.

An August 2009 meeting between the prefecture’s environmental protection section and Daikin representatives contained the following.

Prefecture: “Why don’t we use opportunities such as the Bon Dance Festival at the Yodogawa Plant to inform people of our initiatives to protect the local environment?” But Daikin refused to do so.

Daikin: “At the moment, there have been no inquiries from the local community about PFOA. If it’s going to stir up anxiety, and since we’ll soon be stopping PFOA production, we’d like to avoid mentioning it as much as possible.”

In October 2009, periodic meetings between Daikin, Osaka Prefecture, and Settsu City began, again behind closed doors. However, Daikin still refused to inform the public of the level of pollution, despite urging from Settsu City, which is responsible for the safety of local residents.

At the first meeting, a Daikin representative said, “Although we’d appreciate it if you keep this information private, the EPA is moving to ban PFOA from 2015.”

Although Daikin refused to be transparent with locals about PFOA pollution in Japan, the company couldn’t avoid responding to similar pollution in the U.S.

The local water department and residents sued three companies, including Daikin, that manufactured PFOA upstream near the river. A settlement was reached between the plaintiffs and Daikin in 2018 in which the company paid out $4 million, including the cost of equipment to remove PFOA from drinking water.

Daikin also failed to hold itself accountable to Settsu city council members when a six-person nonpartisan group visited the Yodogawa Plant in December 2021. Daikin representatives refused to acknowledge the results of blood tests conducted on residents by the Kyoto University researchers, questioning the measurement method and accuracy of the analysis.

In January 2022, Daikin’s written responses to questions submitted by city council still failed to address citizens’ concerns. The company stated it would not conduct any survey, cleanup, or other kind of response outside the Yodogawa Plant grounds.

In response, on March 29, 2022, Settsu city council unanimously endorsed a written statement addressed to the national government regarding PFOA pollution caused by Daikin.

Citizens are raising their voices as well. In April 2022, a citizen group formed to address PFOA pollution in the community submitted a petition to the city, asking it to urge Daikin to disclose information about the pollution and take countermeasures. The petition was signed by 1,565 citizens, 85% of whom reside in Settsu.

When Tansa asked Daikin President Masanori Togawa on March 8, 2022 whether Daikin was going to apologize to residents and compensate them for damages, he only responded “No comment.”

How long can Daikin stonewall now that both Settsu city council and citizens have taken action?

Video of the unscheduled interview. Click “CC” for English subtitles.

(Compiled from articles originally published in Japanese on April 1 and April 8, 2022. Translation by Annelise Giseburt.)