The polluter at the heart of the community (3) 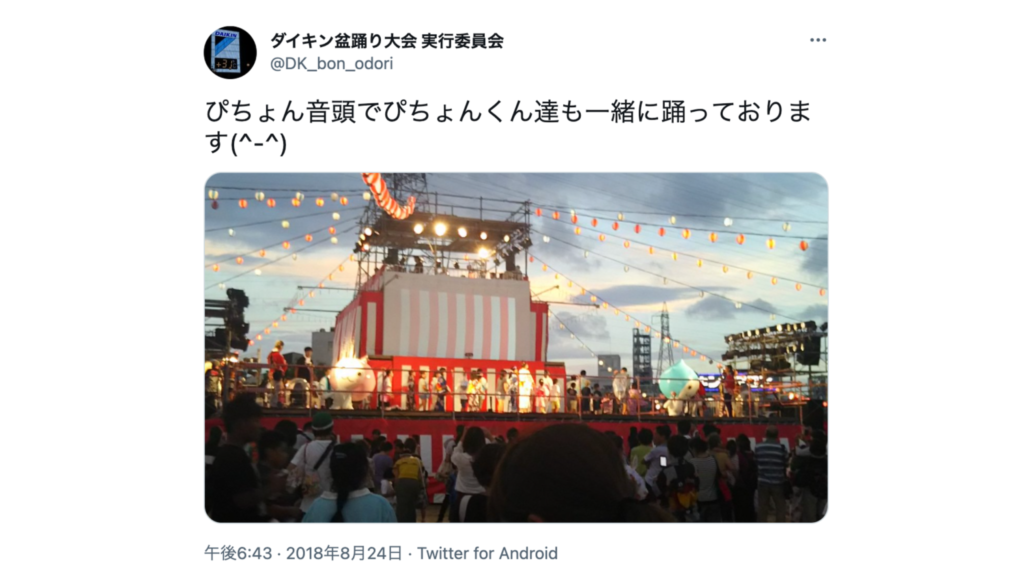 Contaminated water was suspected to have killed cows used for farming, and gas leaks withered crops. In some cases, residents were forced to evacuate. In 1963, farmers marched on the Yodogawa Plant in protest.

What has been Daikin’s relationship to the community it polluted?

“Daikin’s way of putting people in a good mood”

Yuko Higuchi (74, a pseudonym) moved to Settsu City with her family in the late 1970s. The Yodogawa Plant was only a 10-minute walk from her house.

Every year during summer vacation, Higuchi’s family would receive a letter in the post from Daikin. It contained a flyer for the company’s Bon Dance Festival, held in the last week of August, alongside raffle tickets and drink vouchers. Her daughters always looked forward to the festival, so Higuchi attended several times. Food stalls lined the edges of the festival grounds, and a large raised platform had been placed in the center. The festival was always crowded and lively, lit from above by strings of red lanterns.

The raffle was the festival’s main event, with the first prize winner taking home an air conditioning unit manufactured by Daikin.

Although Higuchi’s family never lucked out, she heard the following rumor from a neighbor: “Raffle tickets are also distributed to Daikin employees and business partners too, but the first prize air conditioner is specifically intended to be won by a local — seems to be Daikin’s way of putting people in a good mood.”

Daikin held its first Bon Dance Festival in August 1971. It had 6,000 attendees in the first year, but over time it grew to more than 20,000. In addition to Daikin employees and residents near the Yodogawa Plant, the festival was attended by multiple mayors of Settsu City and even former Osaka Prefecture Governor Fusae Ohta during her time in office (2000–2008). Noriyuki Inoue, current chair of Daikin’s board, served as head of Ohta’s supporters’ group.

Open bar on the bus

The longer she lived in Settsu City, Higuchi came to realize the Bon Dance Festival wasn’t Daikin’s only tool for “putting people in a good mood.”

Once, she received an invitation from the local community association to join a one-day bus tour organized by Daikin every year. Attendance cost between 2,000 to 3,000 yen (about $17 to $26) — much cheaper than the norm. Members of the community association for the area around the Yodogawa Plant could send one person per family. Every year saw roughly 200 to 300 people participate in the bus tour, which was as hotly anticipated an event as the Bon Dance Festival.

Higuchi went on the tour without thinking too much about it. After being shown around the Yodogawa Plant, participants were taken by bus to Ise Shrine in neighboring Mie Prefecture and other sightseeing spots. There was an open bar of sorts inside the bus, serving canned beer and other beverages to participants, and they were treated to a sumptuous meal for a boozy lunch.

Upon returning to the Yodogawa Plant in the evening, participants were all sent home with a goodie bag.

“Some people around here say Daikin uses the bus tours to ‘wine and dine’ us, as a way to make up for the damage they’ve done to the community,” said Higuchi’s husband, Kazuya (74, a pseudonym). Kazuya has never participated in a tour.

In response to questions from Tansa, a representative from Daikin’s corporate communications office said the bus tours and Bon Dance Festival “were intended as an opportunity to interact with the local community and exchange views.”

Daikin is also important to Settsu City. For many years, the company has been contributing significant amounts in property and other taxes. The city’s finances are so stable that some years it doesn’t need to receive any local allocation funds from the national government.

But Daikin contributes more than just tax revenue. Since its establishment, the Yodogawa Plant has been a major employer in the city, for both full- and part-time jobs, in addition to providing a raison d’etre for various affiliated companies, suppliers, and clients. In some cases, every single member of a local family would work for companies related to the Yodogawa Plant in some way. In a sense, the community revolved around Daikin.

“In the past, we used to receive about 1 million yen (about $8,700) per month from our business with Daikin,” remembered Takeshi Kitayama (81, a pseudonym), who used to work as head of the Settsu City post office. “Every single month, without fail, mind you. It was a big help.”

“Settsu City doesn’t receive much in the way of tax revenue from residents, but taxes from corporations keep our finances stable,” explained a city employee, who wished to remain anonymous. “If Daikin pulled out of Settsu, city hall would be in trouble. That’s one of the reasons city officials attend the Bon Dance Festival.”

Daikin entertains residents with festivals and bus tours and is the hero of the city’s finances — but that’s not all.

A member of the Settsu city council, Yoshiharu Miyoshi (66), is concurrently employed by Daikin. A commemorative booklet published by the Yodogawa Plant calls Miyoshi “an ordinary company man” when describing his first election to city council in 1989. 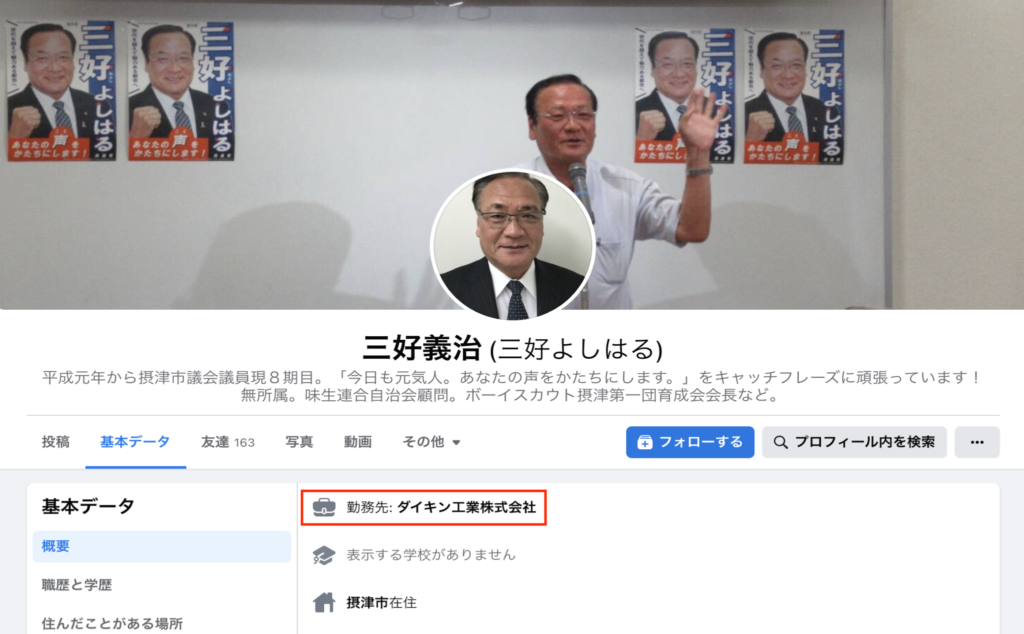 The following is from Tansa’s interview with Miyoshi regarding PFOA pollution in the community caused by Daikin’s Yodogawa Plant.

Are you doing anything to respond to the PFOA pollution?

“My stance is that if I receive an inquiry from a resident, I’ll contact Daikin Industries and have them send someone to respond, but I haven’t received any inquiries.”

So as long as there are no inquiries from residents, you’re taking no action?

“Well, how can we know what kind of action we need to take if we aren’t contacted by residents first?”

In your capacity as a city council member, are you in discussion with city leadership so that the city can request greater pollution control measures from Daikin?

On Dec. 7, 2021, Moriyama went to Tokyo to meet with officials from the Ministry of the Environment and the Ministry of Health, Labour and Welfare. Next time, we will report on what they discussed.

(Originally published in Japanese on Dec. 10, 2021. Translation by Annelise Giseburt.)