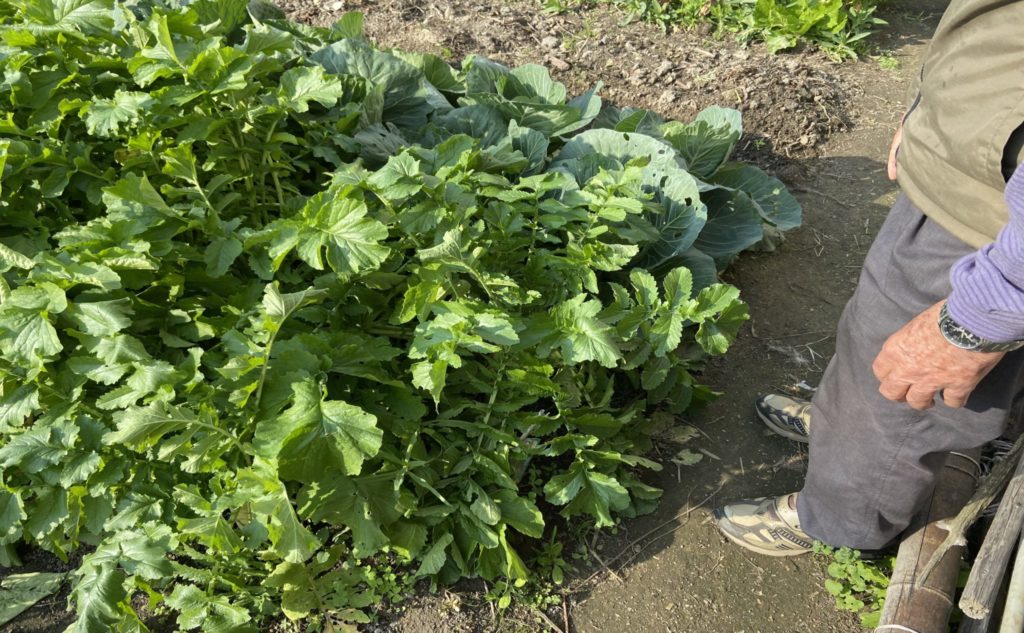 A resident grows vegetables in a field near Daikin Industries’ Yodogawa Plant. A high concentration of PFOA was detected in his blood. Photo taken on Nov. 16, 2021 by Nanami Nakagawa.

However, public opinion soured in June 2020 when the Ministry of the Environment released the results of a nationwide survey of toxic chemical PFOA levels in rivers and groundwater; Settsu’s groundwater was found to have Japan’s highest concentration of PFOA. In October 2021, blood tests conducted by Kyoto University Professor Emeritus Akio Koizumi found high levels of PFOA in the blood of nine out of nine residents tested.

Locals and city council members have begun demanding the city take action but are still waiting for a response. On Dec. 7, 2021, Settsu City Mayor Kazumasa Moriyama traveled to Tokyo for a closed-door meeting with the Ministry of the Environment and the Ministry of Health, Labour and Welfare to request assistance from the national government.

But the meeting didn’t go as they hoped.

Moriyama, currently in his fifth consecutive term as mayor since first being elected in 2004, was beginning to feel the heat as city council members repeatedly pressed him over the city’s PFOA pollution.

For example, Waki Masunaga, a city council member affiliated with Japan’s Communist Party, raised the issue at a council session on June 25, 2021. Masunaga pointed out that even though the Ministry of the Environment had identified Settsu City as having the highest level of PFOA in Japan, the city itself had downplayed the problem by saying the concentration of PFOA was decreasing in the long term.

“Tap water is safe, so it’s not a problem,” a city official responded.

The issue of soil contamination, however, wasn’t so easily dismissed. Professor Koizumi’s blood tests — conducted in July–September 2020 and October 2021 — had both shown high levels of PFOA in residents who had eaten vegetables from fields near Daikin’s Yodogawa Plant.

“How can you say we’re safe as long as we don’t drink the [contaminated ground or river] water?” Masunaga pressed. “Shouldn’t the city conduct its own investigation, one that includes soil contamination?”

“Our understanding is the national government will continue to study this issue,” responded Kazuhiko Matsukata, head of the city’s living environment department.

But in reality, Settsu City Mayor Moriyama and other city authorities weren’t certain of the extent of the national government’s response — hence Moriyama’s decision to go to Tokyo to discuss things in person.

In preparation for the Dec. 7 meeting with the Ministry of the Environment and the Ministry of Health, Labour and Welfare, Moriyama and his team sent their counterparts a summary of the current situation in Settsu, as well as the points they hoped to confirm at the meeting.

・Local residents are very concerned about the results of the groundwater survey near the Daikin plant.

・City leadership is in a very difficult position, as city council members are asking questions such as how the city is going respond to high levels of PFOA detected in residents’ blood.

・There is farmland near the Daikin plant. How far has research on the behavior of PFOA in soil, as well as removal techniques, progressed?

The roughly 40-minute meeting began at 1 p.m. on Dec. 7 at a vice-minister’s office in the Environment Management Bureau of the Ministry of the Environment. The participants were as follows.

・From the Ministry of Health, Labour and Welfare: Michitaka Yokoi, an officer in the Water Quality Control Office; Takayuki Tokura, assistant

The pair from Settsu City quickly cut to the chase: “We have guidelines on PFOA levels for groundwater, but not for soil or crops. To be honest, we’re not sure how to explain the situation to the public.”

“My division doesn’t have jurisdiction over crops, but there’s no reason to believe eating vegetables is riskier than drinking tap water [which is considered safe],” responded the Ministry of the Environment’s Water Environment Division.

“As for the allegedly high levels of PFOA found in the blood of residents who ate contaminated crops, although we believe there probably isn’t an immediate health risk, there are still gaps in our knowledge.”

Although the Ministry of the Environment thought there might be no immediate health risk, it seems the Settsu leaders felt that wouldn’t be enough to reassure the concerned residents.

“As the local government body, we can’t just put out a warning without a rough idea of a safe PFOA level for soil, as well as specific decontamination measures,” the Settsu team pressed. “We hope the national government will recognize the seriousness of the situation and take concrete steps to address it.”

But the Ministry of the Environment’s Water Environment Division didn’t give the Settsu team the answers they were hoping for.

“Although some may continue to eat locally grown crops, it still doesn’t mean a wide range of citizens are continuing to drink water with a high concentration of PFOA,” a ministry official said. “I think that would be some reassurance.”

“Rather than for the public at large, we want to be able to explain safety standards for soil and crops to residents near Daikin’s Yodogawa Plant, who are particularly concerned,” said the Settsu team, balking at the ministry’s seemingly unconcerned response. “Won’t you please advise us on this?”

“We’re concerned the media is going to blow up this story as some huge environmental hazard,” they continued. “It’s hard to be told there are no solutions to this situation.”

Still, the environment ministry’s Water Environment Division only responded, “We can’t say at this time when such standards will be established, but we will take action once we have gathered enough information.”

Even without knowing a safe level of PFOA, the Settsu team hoped a soil decontamination method would help reassure the worried residents.

“We have heard some kind of absorbent is in development,” they asked, “Can we tell city council about it?”

But the environment ministry’s Soil Environment Management Division responded, “We’re working on developing something, but we can’t yet say for sure that it will be able to absorb PFOA.”

In the end, Mayor Moriyama and his deputy returned to Settsu without reassurance from the national government. What will the city do now?

(Originally published in Japanese on Dec. 17, 2021. Translation by Annelise Giseburt.)