“That water’s dangerous”: Locals near Daikin plant wary of pollution since 1960s (2) 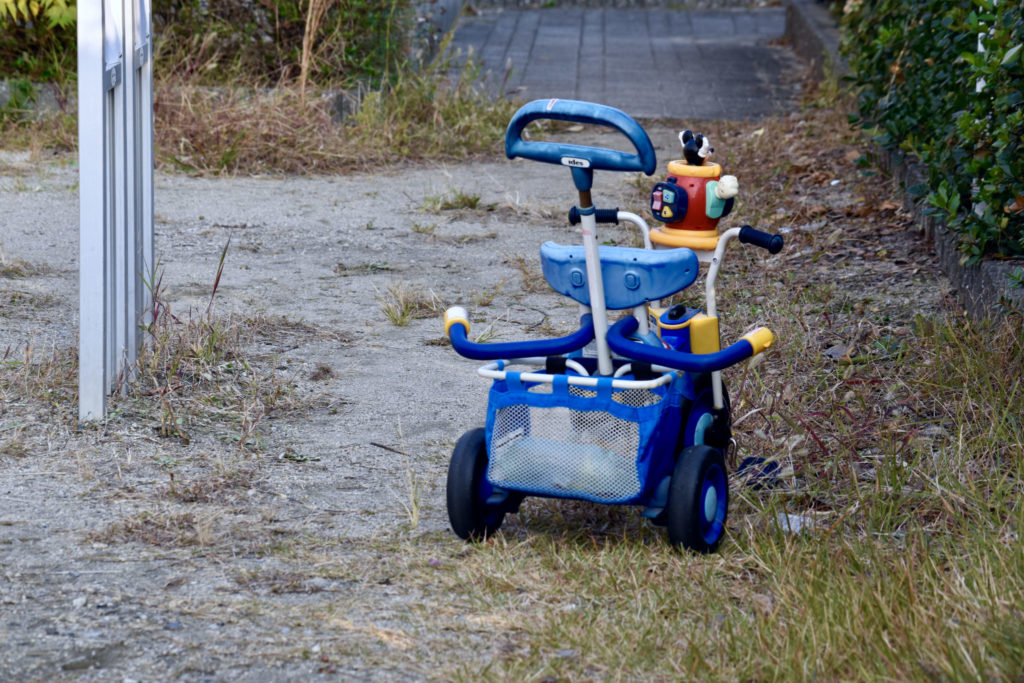 A joint investigation conducted by 19 organizations, including the Osaka prefectural government’s environmental health division and Osaka University’s faculty of medicine, suspected the cows died from heart damage caused by fluorine compounds from Daikin Industries’ Yodogawa Plant. Daikin settled the matter by providing self-propelled cultivators to the farmers who lost cows.

But pollution continued to spread from Daikin’s chemical plant.

Fish dead in the canal

Akira Ohno (64, a pseudonym) was born and raised near Daikin’s Yodogawa Plant, in Settsu City’s Befu district. As a child in the 1960s, the journey from his home to Settsu City’s Ajifu Elementary School contained endless amusement. Ohno would plunge his hands into rice paddies to catch tadpoles and stealthily snack on tomatoes growing in the fields.

One day, on their way home from school, Ohno and his friends were playing a game that involved picking up bottles that had been tossed into a nearby irrigation canal.

He was ankle-deep in the water when suddenly Ohno heard a man yell.

“That water’s dangerous — get out now!”

Looking toward the voice, Ohno saw a friend’s father, a farmer, standing at the edge of the canal. The boys hurriedly climbed out and put on their socks.

Ohno could guess why they had been yelled at. He had previously seen a great number of fish floating dead in the canal.

What’s more, he had heard a rumor passed among the district’s adults: On the grounds of Daikin’s Yodogawa Plant, there is a so-called “pond” where chemicals are dumped, and the wastewater from this pond flows into a nearby waterway.

Ohno had no idea what this “pond” really was. He didn’t even know what was made at Daikin’s plant, just a stone’s throw away, and was left only with anxious uncertainty. 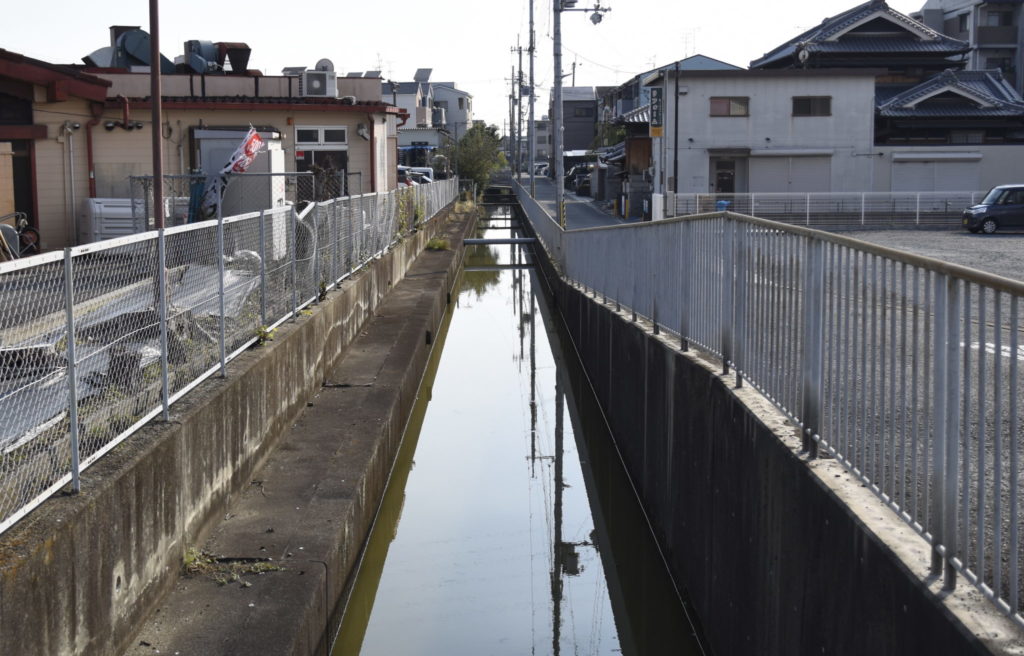 A waterway near the Daikin Industries Yodogawa Plant. Photo by Tomohiro Arakawa.

The Yodogawa Plant lies between the Yodogawa River and its tributaries, the Kanzaki and Ai rivers. The area, originally quite marshy, used to be covered with vegetable fields and rice paddies. Most residents were farmers.

A gridlike system containing waterways of all sizes was built to draw water from the rivers to the fields. The irrigation canal where Ohno had played with his friends was one of them.

In 1941, the 660,000-square-meter Yodogawa Plant was established by Osaka Metalworking Industries, the predecessor of Daikin, in this quiet farming village. It was the height of World War II, and the Yodogawa Plant was originally a munitions factory.

According to the book “Seventy Years of Daikin Industries,” a self-published history of the company, the Japanese navy ordered the plant to produce chlorofluorohydrocarbon (CFC), which is used to cool aircraft and food storage facilities. In July 1942, a chemical plant controlled by the Imperial Japanese Navy technical department was built at the site, while other areas of the rapidly expanding plant produced parts for artillery shells and bombers.

It was the company’s wartime handling of CFC, a type of fluorine compound, that laid the groundwork for its later PFOA development.

“Seventy Years of Daikin Industries” describes the postwar development of fluorocarbon polymers, including PFOA, as follows.

“It hardly needs to be said that catching up with and overtaking leading American chemical manufacturer DuPont was a major goal. Managing director and plant general manager Kazuo Okamura decided to enter the fluorocarbon polymer business using a Daikin-made CFC substitute as a base, with the idea of widening the company’s expertise to fluorine chemistry overall.

“The company’s development of fluorocarbon polymers began in October 1951 with a white sheet of ‘Teflon’ [a registered trademark of DuPont] half the size of a business card.

A history of gas leaks

The company’s fluorine chemical research and development brought fluorine compounds such as PFOA to the Japanese market, but local pollution control measures left something to be desired.

Since beginning operations, the plant’s wastewater was routinely discharged outside its grounds, flowing into the farming community’s irrigation canals. In “Seventy Years of Daikin Industries,” the company acknowledges local pollution as follows.

“From the beginning of the plant’s operations, plant wastewater was combined with local wastewater and discharged into the Shin’an irrigation canal outside the grounds.”

This was the basis of the farmer yelling at Ohno that the canal water was dangerous.

Pollution wasn’t limited to wastewater. On June 29, 1955, fluorine gas leaked from the factory; rice plants in the surrounding fields withered and turned yellow.

“The village office reported to the Mishima-Ajifu regional office that farmers are in an uproar over rice paddies, covering about [80,000 square meters] in the vicinity of Osaka Metalworking Industries’ Yodogawa Plant, that rapidly turned yellow and withering on the 29th,” stated the June 30, 1955 edition of the Mainichi Shimbun newspaper.

“The director, the head of the economic division, and others from the regional office inspected the site and found the incident was caused by anhydrous fluorine gas discharged from the plant.

“The company confirmed that the damage was caused not by the manufacturing process, but by a broken pipe and machine failure. The regional office warned the company to quickly conduct repairs and prevent recurrences.”

But gas leaks would continue.

Another leak damaged crops in May 1963, and in November that year, farmers marched on the Yodogawa Plant in protest.

In June 1973, a gas leak extended even beyond Settsu City into neighboring Osaka City’s Higashiyodogawa ward. Three hundred and forty households were evacuated, and farmers’ vegetables looked like they had been scorched.

A few months later, in August 1973, Daikin established a community affairs section to deal with residents near the Yodogawa Plant. The section was led by the plant’s then deputy director, Noriyuki Inoue, who would go on to become president of Daikin in 1994 and who still serves as chair of the board.

“Seventy Years of Daikin Industries” describes the community affairs section as “a pioneering specialized organization that responds to the local community.”

As for the reason for the section’s establishment, the book states, “Following reflection on the company’s ‘passive’ attitude of only responding after an accident occurred, we keenly felt the need to proactively engage with the community.” 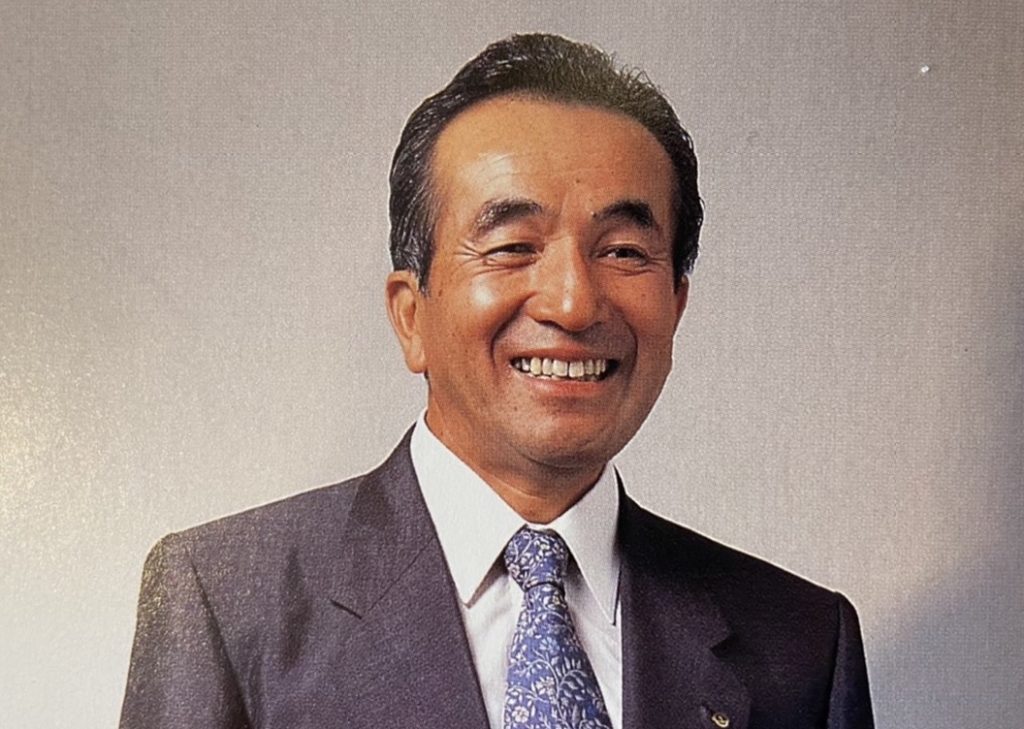 Noriyuki Inoue, who served as head of the community affairs section at the Yodogawa Plant, is currently chair of the board and global group representative executive officer at Daikin. Photo from 'Seventy Years of Daikin Industries.'

“Daikin will be found responsible”

The community affairs section preceded solutions to the plant’s wastewater by a number of years. Daikin implemented wastewater countermeasures for the first time in 1981, eight years later.

But it wasn’t enough to stop the community becoming polluted with PFOA from the Yodogawa Plant. According to a 2019 survey by the Ministry of the Environment of groundwater and rivers, Settsu City was found to have the nation’s highest concentration of the toxic chemical.

Although Daikin only says the Yodogawa Plant “may have been one of the causes” of the PFOA pollution, the prefectural government is more certain.

In a future article, we’ll delve further into Daikin’s relationship with the community it polluted.

(Originally published in Japanese on Dec. 3, 2021. Translation by Annelise Giseburt.)