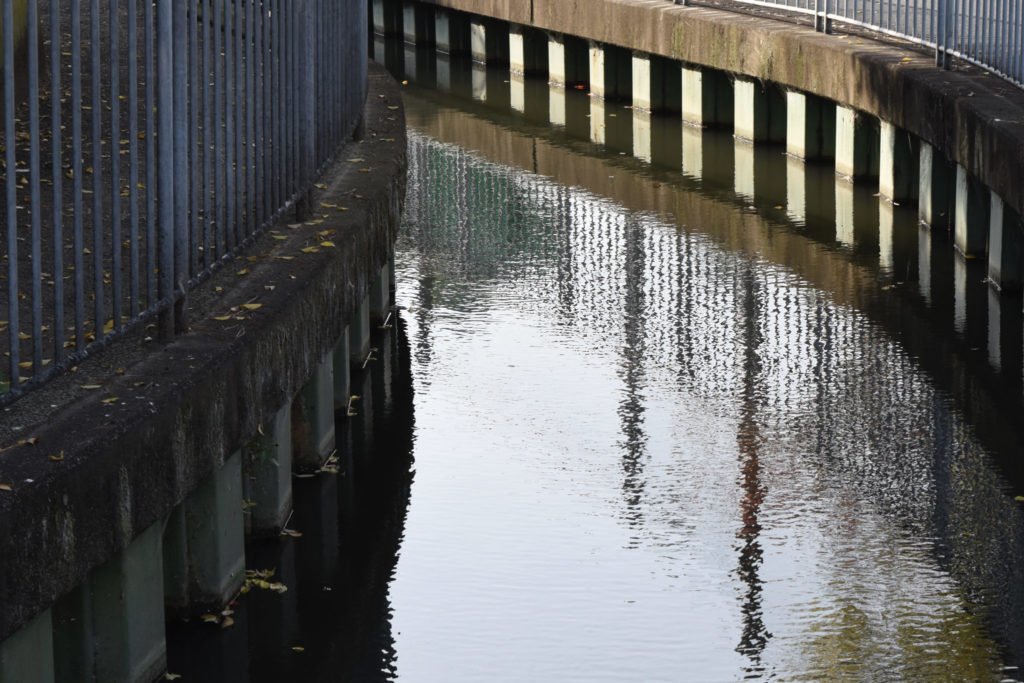 In November 2021, high levels of the toxic chemical PFOA were detected in the blood of nine out of nine residents tested in Settsu City, Osaka Prefecture. The highest level detected was 70 times the level in non-polluted areas. The residents live near Daikin Industries’ Yodogawa Plant, which manufactured PFOA from the 1960s to 2015.

PFOA is an organic fluorine compound that repels water and oil. It has been widely used in products such as fluorine-coated non-stick pans, waterproof clothing, and cosmetics. The American chemical manufacturer DuPont and others began manufacturing PFOA in the 1930s.

In the U.S., DuPont first found PFOA to be toxic through animal experiments conducted in the 1950s. In 1981, the company conducted a study of seven women who worked on a PFOA production line shortly after they had given birth. All were found to have high levels of PFOA in their blood, and two of their children had been born with eye defects.

Scientists in the U.S. conducted a study of about 70,000 people exposed to PFOA. In 2012, their results linked the chemical to six diseases, including thyroid disease and two types of cancer.

In Japan, however, the dangers of PFOA are not widely known. Only recently, in October 2021, the Ministry of Economy, Trade and Industry (METI) banned the production and import of the chemical.

How long have Daikin and other Japanese PFOA manufacturers known about its toxicity? Why did the government wait so long to act? And have citizens been harmed by their negligence?

Masato Yoshii (pseudonym, 69) was visited at his home in Settsu City, Osaka Prefecture, by two members of Daikin’s General Affairs Division in June 2020. The Daikin employees appeared to be in their 50s and were dressed in work uniforms. Yoshii had requested the meeting after seeing a news report on TV a few days earlier about results of a nationwide survey conducted by Japan’s Ministry of the Environment (MOE) on PFOA levels in Japan’s groundwater and rivers.

The MOE survey, prompted by PFOA’s addition to the Stockholm Convention on Persistent Organic Pollutants as a highly dangerous chemical in 2019, had examined 171 locations near factories and other sources of PFOA emissions.

Settsu City was found to have by far the highest levels of PFOA in all Japan.

Top 10 locations in Japan with the highest level of PFOA, as listed in the Ministry of the Environment’s “FY2018 Results of the Nationwide Survey on the Presence of PFOS and PFOA” (released on June 11, 2020).

Yoshii owns a field just across the road from Daikin’s Yodogawa Plant, a distance of no more than seven meters. He watered the field from a nearby well and routinely ate the vegetables he grew there, such as eggplants and potatoes. Worried that he might have ingested a dangerous amount of PFOA, Yoshii requested a meeting with Daikin.

But the Daikin employees had come prepared to allay his fears.

“As you can see in the graph, the PFOA levels in this area are decreasing,” one of the employees said, showing Yoshii a paper he had taken from his bag. “Your well water is safe.”

But Yoshii didn’t believe them.

“Can you test the vegetables and soil in my field, the well water, and the blood of my family members and myself?” he asked.

But the Daikin employees, pointing to the same piece of paper, refused: “The numbers are going down, and unfortunately we can’t respond to individual requests.” After about 30 minutes, they left.

Although he had struck out with Daikin, the following month Yoshii had his blood tested by Akio Koizumi, professor emeritus of Kyoto University’s Department of Health and Environmental Sciences. In October 2021, he underwent another of Koizumi’s blood tests. Contrary to what the Daikin employees had said, both tests showed high levels of PFOA.

The two employees who visited Yoshii were Daikin’s contact persons for the local community; he knew their faces from other events put on by the company.

“I knew right away they were pushing the company’s story,” Yoshii said. “I guess Daikin thinks that will convince us. They have caused pollution problems in the community before but always managed to sidestep responsibility.”

The “pollution problems” Yoshii referred to began 68 years ago, with an incident involving the death of 47 cows. Although it took place before the Yodogawa Plant began manufacturing PFOA, it was caused by another toxic fluorine compound.

“They would bellow twice, then slam to the ground”

Tadayoshi Nishino (78) remembers the incident well. In the early 1950s, Nishino was living on his family’s farm in Higashiyodogawa Ward, Osaka City. The area contained swathes of fields, dotted with about 100 farmhouses.

It was Nishino’s task to take care of the cow his family kept to plow their fields. He was very fond of her, and on days when there was no farm work Nishino would take her to the nearby Yodo River before heading to elementary school. He would tether her with a 10-meter rope and let her eat grass and drink from the river. After school, he would come pick the cow up and take her back to the barn.

One day in October 1953, as Nishino was walking in his neighborhood, he heard a cow’s bellow. Turning toward the sound, he saw that the cow of a neighborhood farmer had collapsed while tilling the field. When people nearby approached, they found the cow already dead.

Cows continued to die suddenly over the next two to three years. It happened without warning; the cows didn’t appear to be diseased or deranged. Thirty-six cows died in Higashiyodogawa Ward and 11 in Settsu City. Nishino’s was among their number. His family bought a new calf to replace her, but it died too.

“They would bellow twice, then slam to the ground,” Nishino recalled. “They all died the same way.” 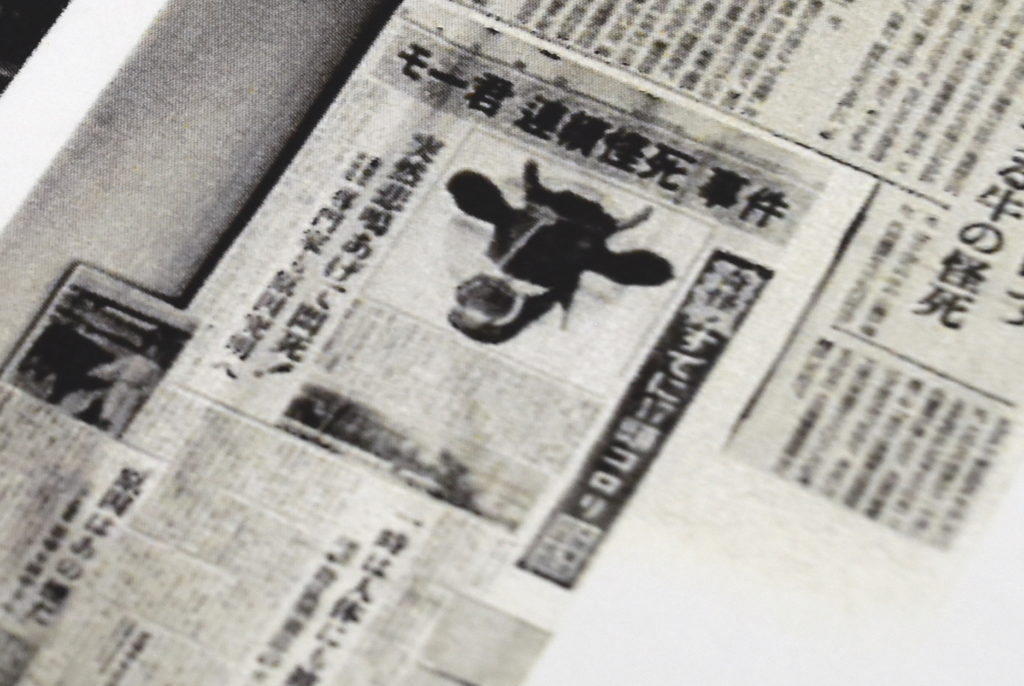 Newspaper article on the cow deaths. Taken from an booklet titled “On the Dismantling of the Main Building: 72 Years of Progress and a New Future,” published by Daikin Industries’ Yodogawa Plant.

“The cultivators made the problem go away”

At the time, locals were worried that the strange affliction would spread to people too. Local government officials gathered both children and adults at a community center to conduct tests. Nishino had his blood and stool samples taken, but no abnormalities were found.

A team comprised of representatives from 19 local governmental organizations, including the livestock division of the Osaka prefectural government’s agriculture and forestry department and the department of hygienic chemistry of the Osaka City Institute of Public Health, was assembled to identify the cause.

Based on their investigation, the team suspected the cows died from heart damage caused by fluorine compounds from Daikin’s Yodogawa Plant. Contaminated water from the plant had been discharged into rivers and irrigation water, which the cattle drank. Although the investigation team published a report, its findings were not proactively shared with the community.

The farmers were at a complete loss for what to do. They needed cows for farming.

Then, one day, Daikin provided them with self-propelled cultivators. There were five neighborhood associations in the area where Nishino lived, and Daikin gave one to each. Even without their cows, the farmers could continue cultivating their fields.

Nishino still had his doubts. Daikin never directly explained to the farmers why the cows died or why the company was distributing cultivators.

“At the time, the cultivators made the problem go away,” Nishino said.

In response to questions from Tansa, Daikin stated that “From 1953 to 1955, a number of farm cows died in some areas of Higashiyodogawa Ward and Settsu City, and it was suspected the cause was wastewater from the chemicals we were handling at the time.

“The Osaka prefectural and city governments conducted a thorough investigation, and Daikin also made efforts to collect information and investigate the cause, but we were unable to reach a unified conclusion even after two to three years.” 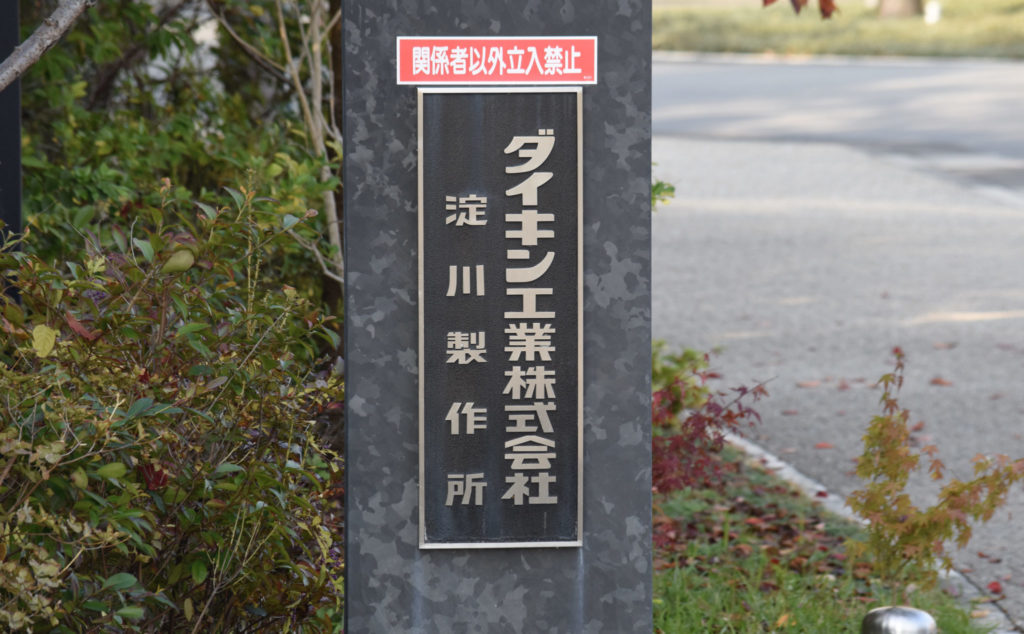 Getting rich on PFOA

Daikin’s Yodogawa Plant has been developing fluorine compounds since the 1940s. The processes were complex, and Daikin saw itself as racing with American chemical manufacturers, first and foremost DuPont, to develop its technologies.

DuPont landed a hit in the late 1950s with Teflon-coated products that used PFOA. By the late 1960s, Daikin too had successfully commercialized the compound.

In the ensuing years, Daikin’s domestic sales were supported by this toxic chemical.

Settsu City, where the Yodogawa Plant is located, similarly felt the economic benefits of Daikin’s PFOA business — but also its costs.

(Originally published in Japanese on Nov. 26, 2021. Translation by Annelise Giseburt.)