PFOA, a toxic chemical, has been detected in the blood of nine residents living near Daikin Industries’ Yodogawa Plant in Settsu City, Osaka Prefecture, at concentrations dozens of times higher than in non-contaminated areas — the highest over 70 times.

The blood samples were collected on Oct. 23, 2021 and analyzed by Akio Koizumi, professor emeritus of Kyoto University’s Department of Health and Environmental Sciences.

PFOA is a chemical substance used in a wide range of products, such as fluoride-coated non-stick frying pans and cosmetics. In Japan, the Ministry of Economy, Trade and Industry (METI) banned the manufacture and import of PFOA in October 2021. Daikin’s Yodogawa Plant had been manufacturing PFOA since the late 1960s.

“There’s PFOA contamination all over this area”

One individual whose blood Koizumi tested is Masato Yoshii (pseudonym, 69), who owns vegetable fields just across the road, no more than seven meters, from the Yodogawa Plant.

In 2020, results of a nationwide survey on PFOA contamination conducted by the Ministry of the Environment showed that groundwater in Settsu City had the highest concentration of the chemical in Japan. As residents grew more concerned, Yoshii and eight others volunteered to participate in Koizumi’s blood tests.

On Nov. 8, Yoshii received an email from Koizumi with his results.

What he read shocked him: His blood contained 38 times more PFOA than that of people living in non-contaminated areas. Yoshii grows crops using local well water, in fields his grandfather had begun cultivating almost a century ago. He has been eating from these fields since childhood.

“I’ve always enjoyed growing vegetables, and my family would eat what we picked. I’m getting on in years so there’s no use worrying about myself, but I hate to think what might happen to my children and grandchildren,” he said.

High levels of PFOA were detected in all nine people tested, with the highest 70 times more concentrated than residents of non-contaminated areas.

“In addition to the amount of contaminated vegetables eaten, the concentration in their blood varies depending on the location of the field and type of crop,” Koizumi explained.

“But one thing’s for sure: There’s PFOA contamination all over this area.” 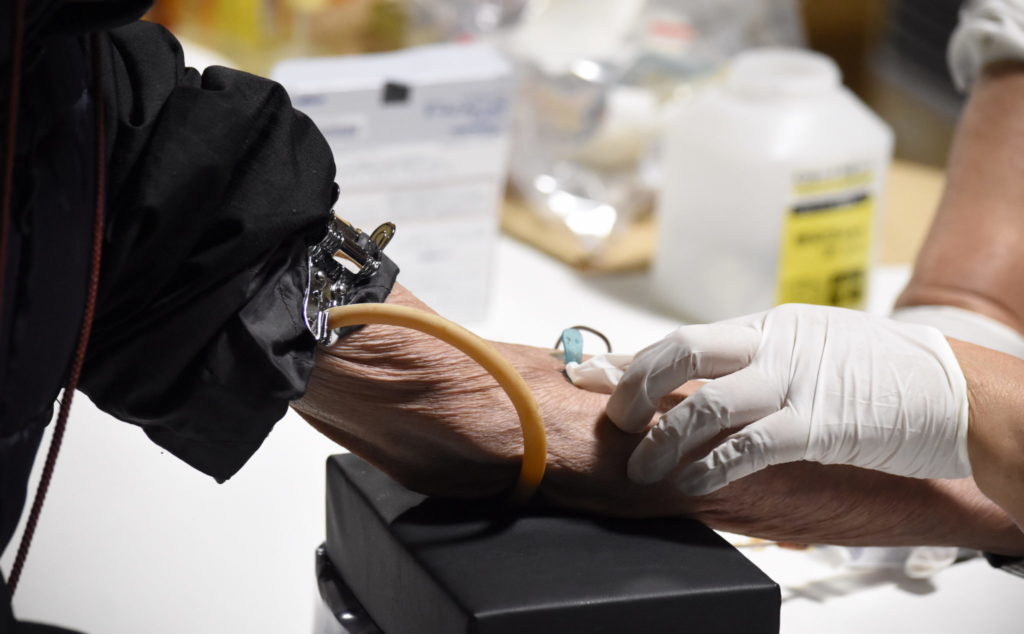 PFOA, short for perfluorooctanoic acid, is a man-made organic fluorine compound that repels water and oil. It has been used to coat cookware and waterproof products since the 1950s. Fluorine-coated non-stick frying pans became a popular household item around the world.

However, beginning in the 1970s, studies in the U.S. and EU found that PFOA is carcinogenic and can affect the development of young children and fetuses, including causing children to be born at low weights or with congenital diseases.

In 2019, PFOA was added to the Stockholm Convention on Persistent Organic Pollutants as a highly dangerous chemical, banning its production and import for parties to the treaty. In October 2021, METI announced a similar ban.

Daikin: “We may be one cause” of contamination

Daikin, the company which owns the Yodogawa Plant, and local authorities have been aware of PFOA contamination in the area since at least 2009. Between 2009 and November 2021, Daikin, Settsu City, and Osaka Prefecture held 21 tripartite meetings to discuss PFOA contamination countermeasures.

However, none informed residents about the pollution.

In June 2020, a survey by the Osaka Prefectural Government found PFOA in Settsu City groundwater to be 28 times the acceptable limit set by the Ministry of the Environment. According to minutes of the 19th tripartite meeting held on June 30, 2020, a representative of Daikin expressed their wish “not to disclose the concentration at the Daikin Yodogawa Plant grounds.”

But now, Koizumi, the former Kyoto University researcher, has detected high levels of PFOA in the blood of nine residents.

In response to questions from Tansa regarding the company’s responsibility, a representative from the Daikin public relations group stated, “We have not been able to confirm the detection method and accuracy at the one-billionth level, so we will not comment on this matter.

“We have manufactured and used PFOA in the past, so we are aware that we may have been one of the causes of PFOA being detected in nearby water.”

(Originally published in Japanese on Nov. 11, 2021. Translation by Annelise Giseburt.)

Next article
Polluted with PFOA: All articles