Despite paying for water purification system in U.S., in Japan Daikin refuses to clean up PFOA pollution (14) 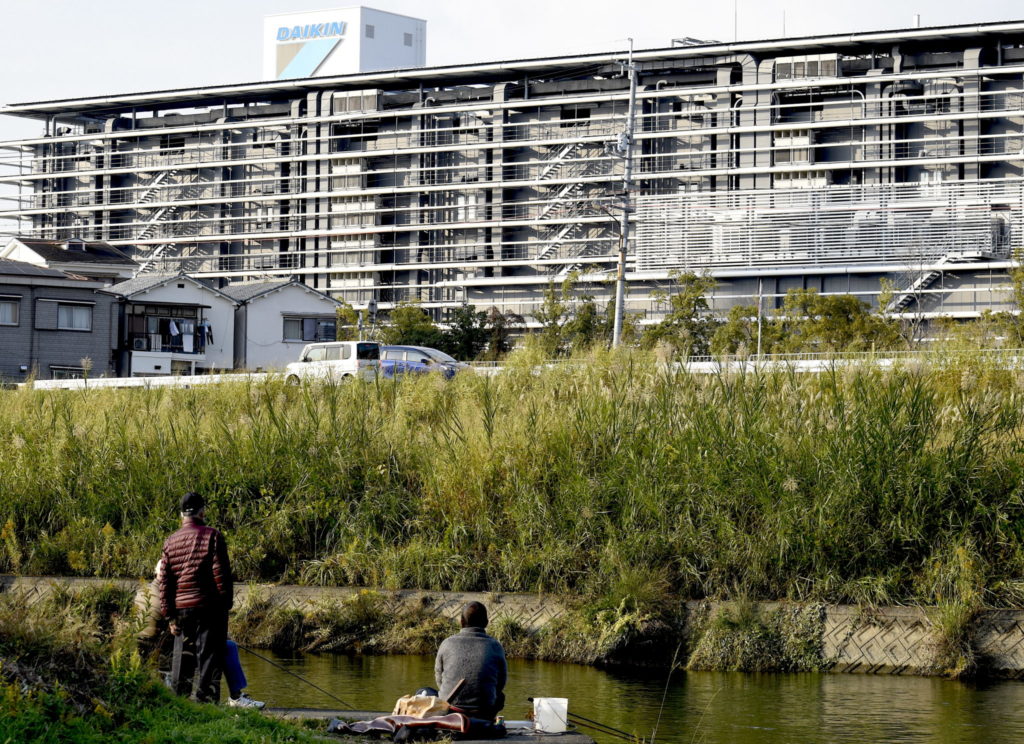 After a nationwide survey by the Ministry of the Environment found that groundwater in Settsu City, Osaka Prefecture, contained the country’s highest level of toxic chemical PFOA and separate research detected high levels of the chemical in the blood of nine out of nine residents tested, a multi-party group of Settsu City Council members sent 33 questions to Daikin Industries about the pollution issue.

Daikin’s response was a parade of denials. The company claimed that the groundwater pollution might have been caused by others as well, that the Kyoto University research team’s blood tests were unreliable, and that residents could not be exposed to PFOA though soil.

However, Daikin had taken a different approach when confronted about PFOA pollution caused by its plant in the U.S. — when sued by residents and others, the company had paid out a $4 million settlement.

Daikin makes no move to clean up PFOA pollution in community

Daikin’s responses to the Settsu City Council group — whose members represented the Liberal Democratic, Communist, Komeito, and Osaka Restoration political parties — indicated the company’s approach to PFOA pollution in the city going forward. As Settsu’s groundwater had logged the highest concentration of PFOA in Japan, the city needed Daikin to address the situation.

However, Daikin said it was “not aware of PFOA causing health problems [in the area around its Yodogawa Plant], so we do not intend to implement any particular response at this time.”

Local residents want the pollution cleaned up. One of the city council members’ questions had been whether Daikin was willing to do so.

But Daikin merely repeated that it “had no intention of implementing a response.”

Daikin’s answers to the city council members’ 33 questions can be summarized as follows. 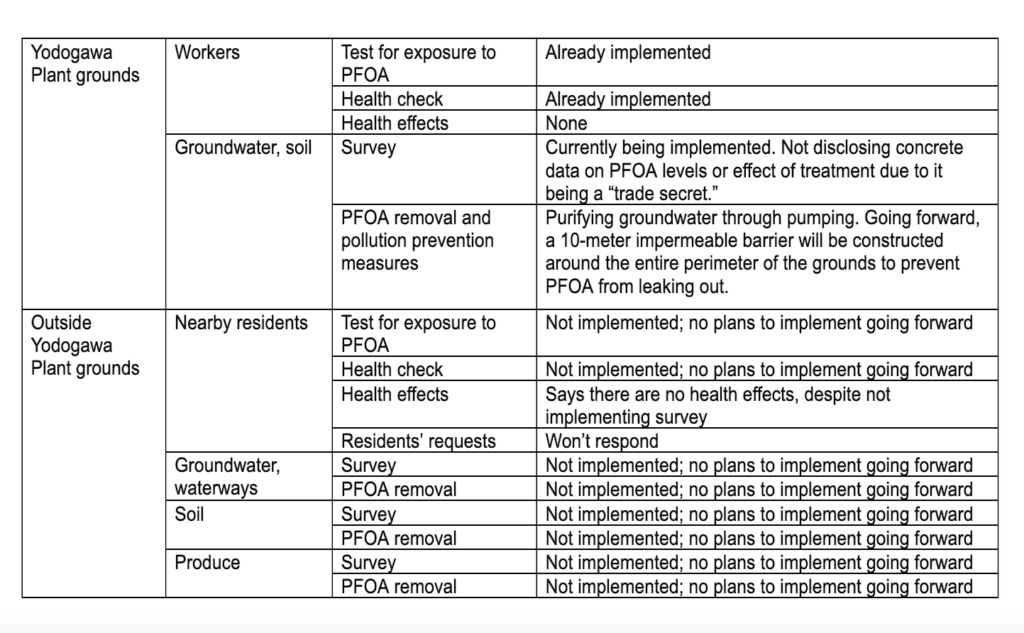 Although, in Japan, Daikin was refusing to respond to locals’ requests to help decontaminate the area around its plant, in the U.S., the company had paid for PFOA cleanup following a lawsuit by residents.

In 2005, PFOA was detected in the Tennessee River in Alabama, U.S., by a local water department that sourced the area’s drinking water from the river.

Three PFOA manufacturers were operating upstream from where the chemical was detected: 3M, Dyneon (a subsidiary of 3M), and Daikin America (“Daikin”).

In 2013, the U.S.’s Agency for Toxic Substances and Disease Registry (ATSDR), which evaluates exposure and health effects of toxic substances, analyzed the blood of 121 residents who had been drinking the contaminated tap water.

The tests confirmed that residents’ blood contained higher levels of PFOA and that drinking the contaminated water had been the cause. Three residents and the water department filed a joint lawsuit against Daikin and the two other PFOA manufacturers that year.

In 2018, Daikin settled the suit to the tune of $4 million, including the cost of equipment to remove PFOA from drinking water.

The Settsu City Council members, aware of the U.S. lawsuit’s outcome, posed the following question to Daikin: “Was the reason your company paid the $4 million settlement in Alabama, U.S., because you acknowledged that the Tennessee River water was too contaminated with PFOA to drink?”

Daikin responded: “While it is true that part of the settlement money will be used to pay for a drinking water purification system, the settlement does not acknowledge any liability or illegality on the part of our subsidiary.”

Daikin America plant in Decatur, AL. The Tennessee River is near the plant.

Daikin’s attitude is so different in Settsu compared with Alabama because, in the U.S., a series of lawsuits by residents were forcing PFOA manufacturers to respond to the pollution they caused, and because authorities were more committed to holding the company accountable than their Japanese counterparts.

On Nov. 15, 2021, U.S. President Joe Biden signed a bill authorizing $10 billion to be spent surveying and cleaning up organofluorine compounds (PFAS), including PFOA.

The next day, Nov. 16, the Environmental Protection Agency (EPA) also put out a news release updating its stance on PFOA.

It included the following: “Recent scientific data and new analyses [indicate] that negative health effects may occur at much lower levels of exposure to PFOA and PFOS than previously understood.”

(Originally published in Japanese on March 4, 2022. Translation by Annelise Giseburt.)