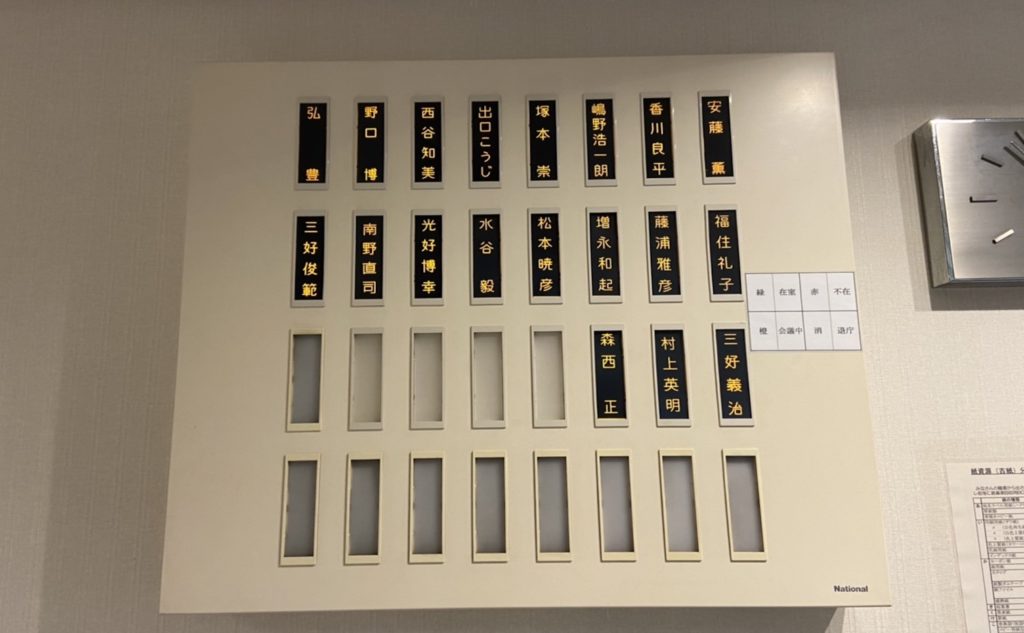 Board at Settsu City Hall showing whether Settsu city council member are in their office.

On March 29, 2022, the city council of Settsu City, Osaka Prefecture, unanimously endorsed a written statement calling for the national government to take action in response to the PFOA pollution in groundwater and soil around Daikin Industries’ Yodogawa Plant and high levels of PFOA detected in the blood of citizens living nearby.

Citizens have also taken action, forming a group that aims to address the PFOA pollution issue. They plan to submit a petition to Settsu City Mayor Kazumasa Moriyama in early April demanding a health survey and that the mayor request Daikin to take countermeasures to prevent further pollution.

The written statement, put forward at a plenary city council session that day, was co-authored by five council members: Hideaki Murakami (Komeito Party), Ryohei Kagawa (Osaka Restoration Party), Waki Masunaga (Communist Party), Tomomi Nishitani (Constitutional Democratic Party), and Hiroyuki Mitsuyoshi (Liberal Democratic Party). All 19 council members endorsed it. Among the citizens observing the session were those who had been found to have high levels of PFOA in their blood.

The written statement cites high concentrations of PFOA detected in both national and Osaka prefectural government water quality surveys. It requests that the national government take prompt action on the following four points.

1. Continue to accumulate scientific knowledge on PFOA’s carcinogenic qualities and its effects on the body, such as low birth weight; promote research and studies on analytical methods and target values for PFOA in the blood.

2.  Promote research on analytical methods and target values for PFOA in soil; with the cooperation of local government, develop technologies for the removal of PFOA from soil.

3. Promote surveys and research on analytical methods and target values for agricultural products, including surveys of perfluoroalkyl compounds (PFAS), including PFOA, in food products.

4. The government should dispatch officials to Settsu City and other local governments to work closely with them to collect information on health effects related to PFOA, as well as its presence in water, soil, agricultural products, etc. [in Settsu.]

Tansa interviewed Settsu city council members from various political parties before and after the session.

“I have been asked by community members whether they can use Settsu’s water for their crops, but all I can respond is, ‘I think it’s best not to use water from wells or irrigation channels as much as possible.’ I would like the national government to provide accurate guidelines [about PFOA], and for Settsu City to remind its citizens to refrain from using well water or irrigation water.”

“If the government doesn’t take prompt action, then Settsu City will have to. If it’s found that PFOA is negatively impacting citizens’ health, we have no time to lose. The city also needs to decide quickly whether or not students at Ajifu Elementary School will be allowed to take home the [potentially contaminated] rice they harvested. We [the Osaka Restoration Party] will tackle the PFOA issue with a sense of urgency.”

“As citizens are becoming increasingly concerned, we need to quickly implement a survey to understand the level of pollution in the community and citizens’ exposure to it. PFOA doesn’t just harm the individual exposed, it can harm their unborn children as well. We will continue to respond to the citizens’ signature campaign and the issue of [potentially contaminated] rice distributed to students at Ajifu Elementary School.”

“The city is limited in what it can do, so the national government must take responsibility for soil surveys. The government also needs to share with us what it knows about PFOA’s health hazards. We hope the government will set [regulatory] standards soon.”

“For my part, I’m making a sincere effort. I endorsed today’s written statement. I hope the national government will conduct a thorough investigation, including research and development, while also allocating a budget the environment and public health hazards due to pollution. I hope the private sector leads this effort, and that the facts are conveyed [to the public].”

“If other local governments have already taken action on health effects and soil contamination, we need to use their work as an example and ask Daikin, the national government, or the Osaka prefectural government to take action. As for the distribution of [potentially contaminated] rice to the Ajifu Elementary School students, they should not be allowed to bring it home.”

“I spoke with three farmers in Settsu City with high levels of PFOA in their blood. I believe that this written statement is a first step. I am not on the government side; I stand with the citizens.”

Citizens, led by a group dedicated to addressing the PFOA pollution issue, have began collecting signatures to accompany a written request they plan to submit to Mayor Kazumasa Moriyama. Takeshi Maseba, a lawyer and Settsu resident, serves as head of the citizens’ group.

Their written request points out that “the national government, Osaka Prefecture, and Daikin Industries have all acknowledged” that Daikin’s Yodogawa Plant caused the PFOA pollution, which “remains serious even now.” The letter asks Mayor Moriyama to address the following five points, including requesting that Daikin take measures against the pollution.

1. Conduct a survey of PFOA concentrations in groundwater and waterways in Settsu City’s Befu and Higashi Befu neighborhoods.

3. Conduct blood tests and other health studies on citizens concerned about PFOA pollution.

4. Join Osaka Prefecture in requesting that the national government create guidelines for PFOA in soil and crops, as well as health effects.

The group plans to submit their petition to Mayor Moriyama in early April, alongside the collected signatures.

(Originally published in Japanese on March 29, 2022. Translation by Annelise Giseburt.)