High levels of toxic chemical PFOA were detected in residents who had been eating crops from fields near Daikin Industries’ Yodogawa Plant in Settsu City, Osaka Prefecture. PFOA from the plant had accumulated in the fields.

Settsu City Mayor Kazumasa Moriyama, at a loss how to respond to residents’ concerns, asked the Ministry of the Environment for help. However, ministry officials only responded, “We believe there probably isn’t an immediate health risk.”

But Settsu residents couldn’t accept this seemingly unconcerned response. One major cause for concern was that students at an elementary school near the plant regularly brought home vegetables grown in the schoolyard, as well as rice harvested from nearby fields.

In fall 2021, rice was harvested from a field next to one believed to be linked to high levels of PFOA found in its owner’s blood.

Settsu City’s Ajifu Elementary School is located only 45 meters from the Yodogawa Plant. The school, which as of April 8, 2021 had 287 students, has a vegetable patch in one corner of the schoolyard, and every autumn fifth graders harvest rice from nearby fields. Children take home the harvested rice and vegetables to eat with their families.

However, Settsu’s groundwater was found to have Japan’s highest concentration of PFOA, according to results released in June 2020 of a nationwide survey conducted by the Ministry of the Environment. Blood tests conducted by Kyoto University Professor Emeritus Akio Koizumi showed high levels of PFOA in residents tested, dozens of times higher compared with non-contaminated areas. All residents tested had eaten produce grown in fields near the chemical plant.

On June 7, 2021, three parents jointly submitted a written request to Mayor Moriyama, Superintendent Tomoya Hashiodani, and Ajifu Elementary Principal Takako Osaki that a survey be conducted in order to understand PFOA pollution at the school.

“Recent surveys by the national government and Osaka Prefectural Government revealed that Japan’s highest concentration of organic fluorine compound PFOA was detected in the same area as Ajifu Elementary School,” their petition read. “PFOA can cause serious health problems such as cancer. Neither the prefectural nor city governments have conducted any further investigation or countermeasures, instead merely stating that no one drinks the groundwater in the area.

“However, it was reported in the news that high levels of PFOA were detected in the soil and crops of a field near Ajifu Elementary School, as well as in the blood of its owner, even though he didn’t drink the well water. It was a big shock to us, because children bring home to eat crops grown at the school.

“PFOA is said to affect children more than adults. As parents, we are very concerned about the situation at Ajifu Elementary, and we strongly request that you investigate with all haste PFOA pollution at the school, including the water, crops, and soil in the fields and school grounds.”

Rice harvesting field trip next to field with PFOA

On June 30, 2021, Mayor Moriyama and Superintendent Hashiodani sent a written response to the parents.

They said ​the national and Osaka prefectural governments would handle further surveys of PFOA pollution in Settsu, rather than the city government.

And as for the elementary schoolers’ use of local fields, they responded as follows.

“At Ajifu Elementary School, students learn about flowers and vegetables using planters or rows tilled into the school grounds that mix gardening soil and fertilizer. Tap water is used for watering. We will continue to use farming activities as part of students’ education, and we will work with the relevant departments to continue gathering information on PFOA.”

Moriyama and Hashiodani’s response didn’t address the parents’ point about high levels of PFOA being detected in a nearby field. On Oct. 14, 2021, the annual field trip to harvest rice was held as usual, with 56 fifth graders participating. The field used was adjacent to the one where a high level of PFOA had been detected. 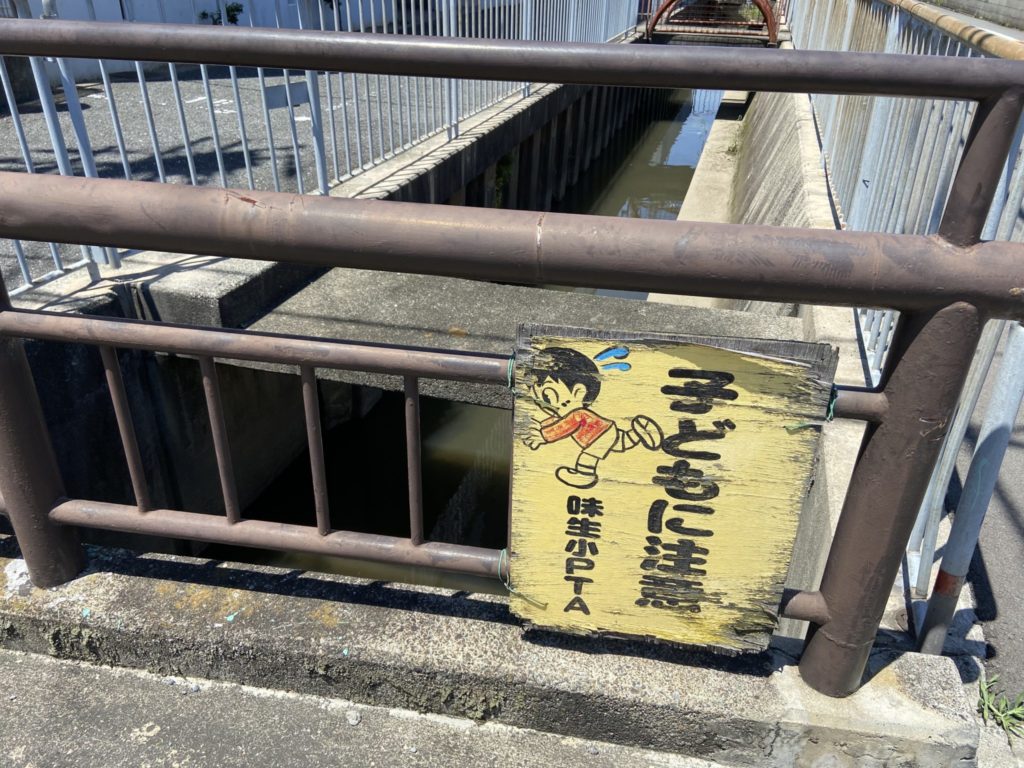 A waterway near Ajifu Elementary School.

Principal looking for a compromise

Tansa was curious to learn what Ajifu Elementary’s principal, Osaki, thought of the situation. We interviewed her on Nov. 19, 2021, while the rice the students had harvested that year was still being threshed and polished by the field’s owner, a process which takes about a month.

Why did you turn down the parents’ request for an investigation into PFOA pollution?

“I wouldn’t say it’s accurate to put it that way. The letter was addressed to the mayor, the superintendent, and myself, but I believe the final response will be given following a meeting of the board of education.”

Will parents be informed that rice harvested might contain PFOA, a toxic chemical?

“If they have concerns and it’s necessary to tell them, then we will.”

Parents are already concerned — that’s why they sent that request. Don’t you think the school has a duty to explain the situation?

“We also have to consider the feelings of the owner of the field. They are offering their land for field trips, so right now we’re trying to find a sort of compromise, or a way to resolve things with everyone’s understanding.”

Shouldn’t the children’s safety be the first priority? Won’t finding a compromise with the landowner take too long?

“I think each family will decide for themselves whether or not to take the rice.”

Doesn’t the school have a responsibility to give them enough information to make an informed decision?

So you’re still planning to distribute rice from the field trip?

“​​As of now, I’m leaning toward distributing it, alongside information that will allow families to decide whether or not to eat it.”

Was rice distributed to students last fall as well [after it was discovered that Settsu had the highest concentration of PFOA in Japan]?

Doesn’t the principal have the authority to prevent this year’s rice from being distributed?

“I’m a little unsure of that; I can’t really imagine such a scenario. After all, the rice harvesting field trip is something we do every year. It’s a food-related educational experience for the children.” 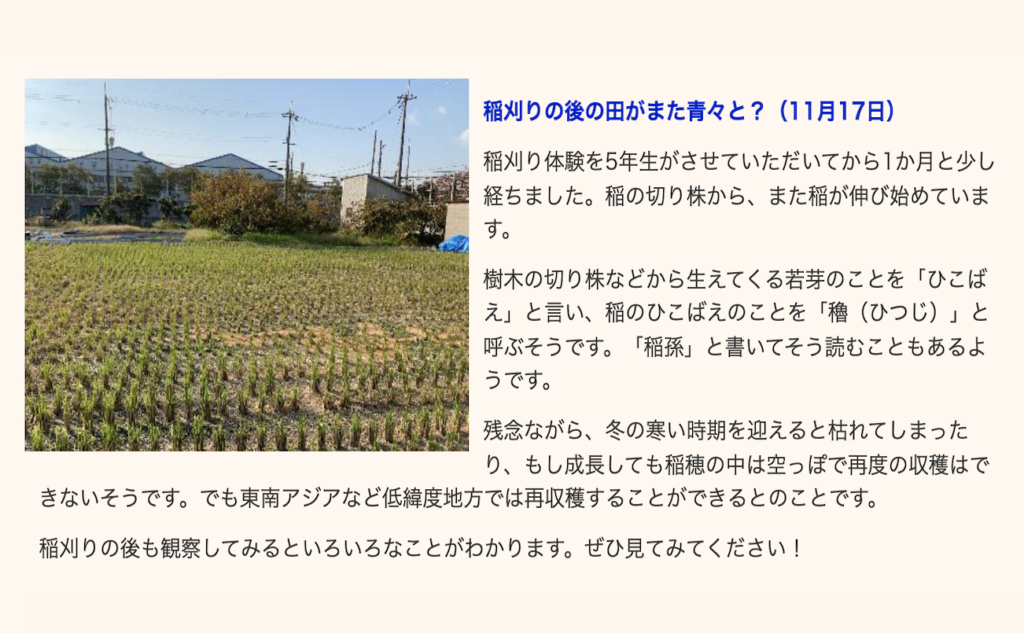 A post describing the previous year’s rice harvesting field trip. Daikin Industries’ Yodogawa Plant can be seen on the far side of the rice paddies. Taken from Ajifu Elementary School’s website.

Although Principal Osaki had indicated her intention to allow students to take home the potentially contaminated rice they had harvested, amid Tansa’s reporting and growing objections from city council, a final decision still hasn’t been reached. A few weeks after we interviewed Osaki, Tansa sat down with Mayor Moriyama on Dec. 10, 2021.

“I don’t think students should be bringing it home,” Moriyama replied when asked about the rice.

Still, he also didn’t definitively state that, as mayor, he would step in to settle the matter.

“The board of education will decide what to do with the rice. It’s not really my place to do so.”

At a Dec. 14, 2021 Settsu city council meeting, Kazuhiro Kobayashi, director of the city’s education and general affairs department, responded as follows to a question from Waki Masunaga, a council member affiliated with the Communist Party.

“We will discuss with the school how to handle the rice planned for distribution, as well as how to explain the situation to parents.”

(Originally published in Japanese on Dec. 24, 2021. Translation by Annelise Giseburt.)