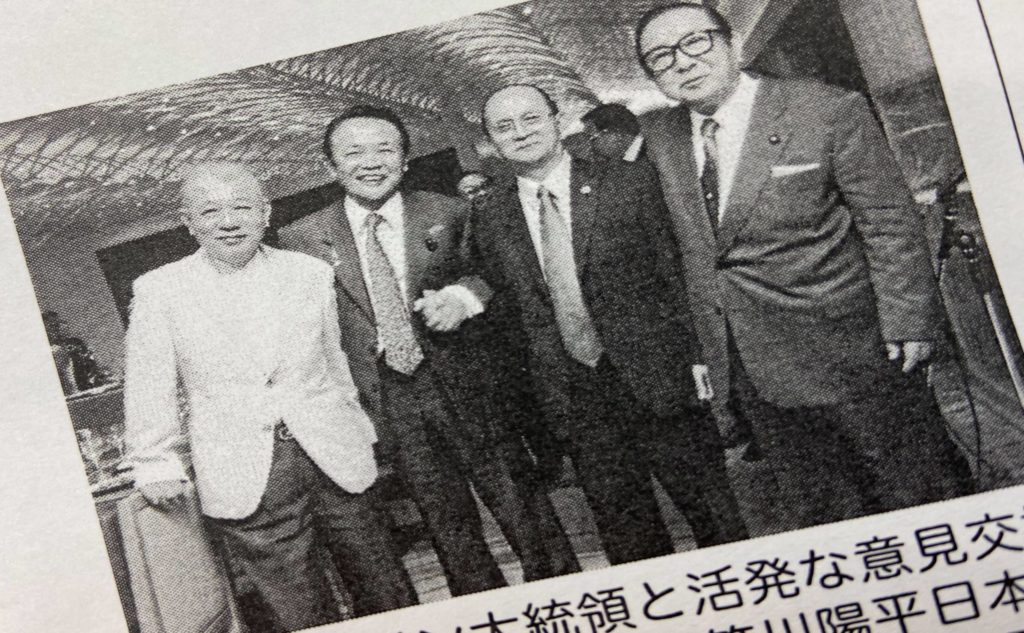 In the first article of this series, we reported on the Japan-backed Y Complex hotel and commercial area development project, which is built on land owned by the Myanmar military. But Y Complex is dwarfed by another ongoing project between Japan and junta-controlled Myanmar: the Thilawa Special Economic Zone (SEZ).

Located on the outskirts of Yangon, the Thilawa SEZ covers an area of 2,500 hectares, roughly 1,500 times the size of the Y Complex grounds.

Fifty-six Japanese companies, including Toyota, operate within the economic zone as of June 1, 2021. A bridge construction project to connect Thilawa with central Yangon is also being carried out by a company with ties to the Myanmar military.

Through bringing influential politicians into the Japan Myanmar Association, Watanabe secured the Japanese government’s support for Thilawa. And his close ties with retired army general and former Myanmar President Thein Sein were also instrumental in Japan’s negotiations with the Myanmar government, which was courting similar aid from China and South Korea.

Japan has given over 100 billion yen (about $905 million) in official development assistance (ODA) for the Thilawa project.

The Thilawa SEZ is located 23 kilometers southeast of Yangon, Myanmar’s largest city. In the past, the area was mostly used for farming rice and other crops. Residents also raised livestock such as chickens, ducks, and goats to help support themselves.

According to the nonprofit Mekong Watch, which has highlighted problems related to the Thilawa development project, the agricultural community’s tranquil existence came to an end on Jan. 31, 2013, when an eviction notice was suddenly affixed to 900 homes.

“Move out within 14 days. Those who remain will be taken into custody for 30 days.”

The notice heralded the start of work on the Thilawa SEZ. There had been signs — such as a group of Japanese visiting the area the previous year — that some corporate venture was brewing, but the eviction order was still a shock to locals.

For the 900 households’ 3,800 residents, eviction would mean losing their farmland and homes. On Feb. 8, roughly a week after the order had been posted, distressed residents sent a letter to President Thein Sein protesting the eviction.

“It took generations of work to make this land suitable for agriculture,” their letter read. “We’ve poured our labor, our sweat, and our resources into this farmland.”

There was no response from the president. Construction progressed, and the residents were forced out. 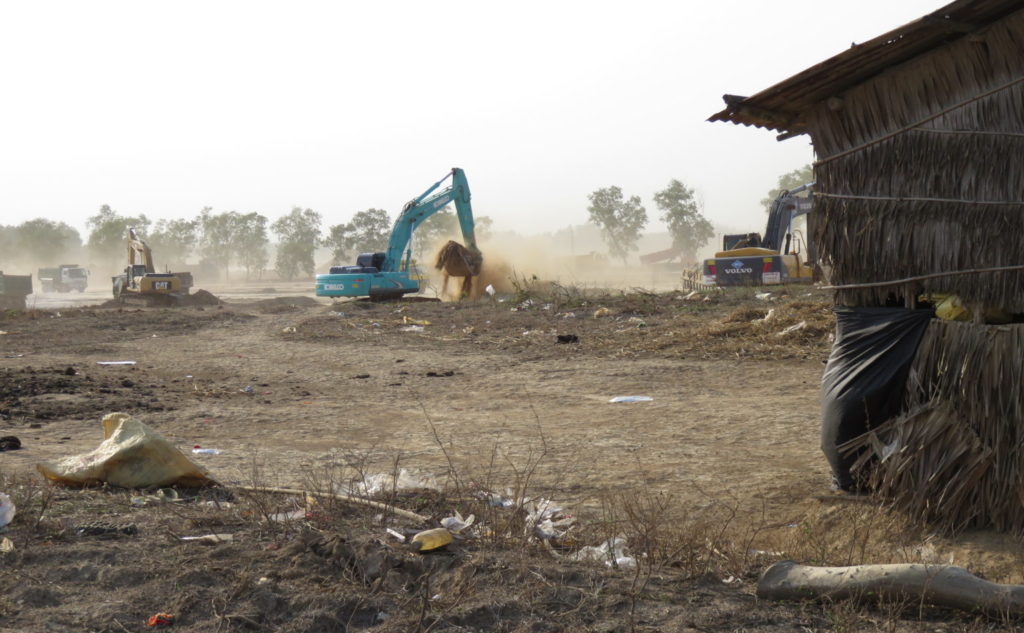 Land under development in Thilawa. Photo taken in October 2014; courtesy of Mekong Watch.

Residents’ average monthly income dropped from roughly $300 to $65 following eviction. The Myanmar government had provided new housing in the vicinity of the economic zone, but the quality was poor, with toilets overflowing in the rainy season.

Stripped of their livelihoods, the residents fell into poverty, with many struggling to feed their children.

“It’s such an enormous strain,” said one mother. “I feel it in my heart.” 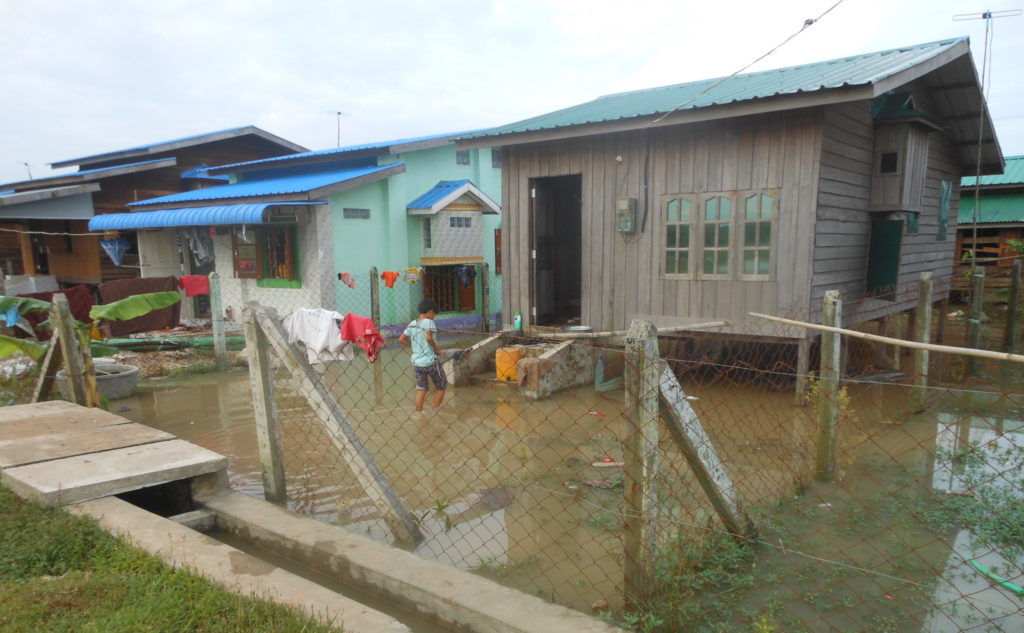 “I visited Myanmar seven times last year and met with President Thein Sein, the heads of the upper and lower houses of the legislature, government leadership, [Union Solidarity and Development Party] deputy chairman Htay Oo, and the leader of opposition party [National Democratic Force], as well as members of the private sector. In order to ensure that Japan can fulfil their expectations, I met with President Thein Sein during each of my visits, doing my part to bridge Japan and Myanmar.”

“The development of the Thilawa economic zone, which is a symbol of Japan’s support, was originally based on plans from three or four countries. However, through repeated meetings — sometimes lasting five or six hours — with the president, ministers in charge, and government leaders, it was agreed based on a presidential decision that Japan would develop the area with Myanmar and that Japan would be responsible for establishing all the surrounding infrastructure.”

Watanabe and Thein Sein had already decided the farmers’ fate long before they sent their letter of protest to the president.

The Myanmar government had been considering dividing up the Thilawa development project between China, South Korea, and Japan. However, Japan secured exclusive development rights through cancelling Myanmar’s $46 million debt and offering new ODA.

The governments of Japan and Myanmar both invested in Myanmar Japan Thilawa Development Ltd. (MJTD), a local company in charge of developing and operating the economic zone.

As the project progressed, Japan supplied Myanmar with an additional 111.9 billion yen (about $1 billion) in ODA for establishing infrastructure in Thilawa. Fifty-six Japanese corporations — including household names like Suzuki, Toyota, and Yakult — set up operations in the economic zone. 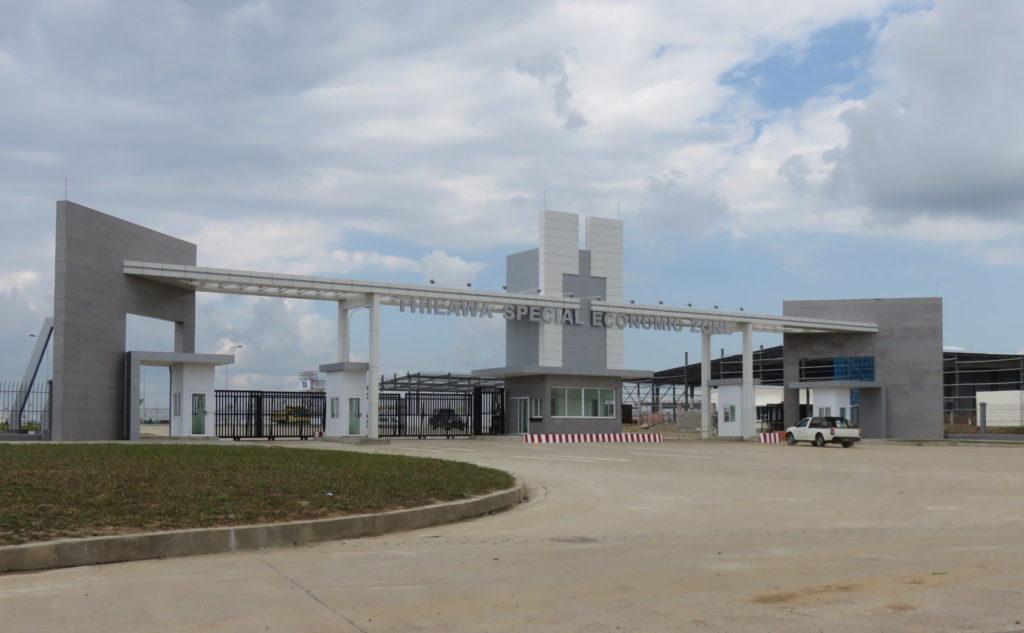 The Thilawa SEZ soon after it was opened. Photo taken in October 2015; courtesy of Mekong Watch.

A history of networking

How did Chairman Watanabe come to be the Japanese government’s proxy for negotiations with Myanmar?

Watanabe served as secretary to Yasuhiro Nakasone, who would go on to become prime minister, before beginning his own political career. A native of Sanjo, Niigata Prefecture, Watanabe served six terms in Japan’s House of Representatives and two terms in the House of Councillors, as well as as deputy chief cabinet secretary and minister of posts and telecommunications, before retiring from politics in 2010.

At a meeting with MJTD officers and others in 2018, Watanabe explained how he came to be involved with Myanmar: The inciting incident had been a talk with then Prime Minister Nakasone and then Chief Cabinet Secretary Masaharu Gotoda during Watanabe’s time as deputy chief cabinet secretary.

According to Watanabe, the three had the following conversation.

“After World War II ended, the Burmese government sent home the Japanese soldiers there without trying them as war criminals.”

“During the post-war food shortages, Burma sent rice to Japan without requiring compensation.”

“And they were the first Southeast Asian country to renounce their right to war reparations from Japan.”

Watanabe, who had been placed in charge of Japan’s support for Myanmar by Nakasone and Gotoda, travelled to Myanmar and began building his relationships with the country’s military regime.

He was particularly close with Prime Minister Khin Nyunt. Watanabe opened doors for Khin Nyunt in Japan’s political circles, such as introducing him to Yoshiro Mori, soon to be inaugurated as prime minister, during Khin Nyunt’s visit to Japan in 2000 for former Prime Minister Keizo Obuchi’s funeral.

One of Khin Nyunt’s trusted subordinates was Thein Sein, who would go on to become president of Myanmar.

According to comments by Watanabe recorded in “Myanmar Focus,” he and Thein Sein had first met during the former’s tenure as minister of posts and telecommunications in 1991-92. At the time, Thein Sein was leader of the military command in Myanmar’s Shan State. When Watanabe visited Shan State to inspect medical aid funded by Japanese postal savings, Thein Sein greeted him at the airport. Their relationship grew from there.

Springing to action in 2011

But for a time, Japan wasn’t able to convert its friendly relationship with Myanmar into business opportunities. Western nations were imposing economic sanctions for the military regime’s human rights abuses and Aung San Suu Kyi’s house arrest. Japan followed suit, restricting its ODA to humanitarian aid and the like.

But in 2011, Watanabe finally got his big break. The military regime released political prisoners such as Aung San Suu Kyi, and other nations started lifting their economic sanctions. What’s more, Thein Sein had assumed the presidency.

The Nippon Foundation — the chairman of which, Yohei Sasakawa, Watanabe calls a “compatriot” — donated 36 million yen (about $326,000) to the Japan Myanmar Foundation upon its founding.

Thilawa was the first large-scale project pursued by the Japan Myanmar Foundation. Yukio Edano, then minister of economy, trade and industry, was all for it.

“Together with members of the Japanese business community, cooperation between our two countries can definitely make this development project happen for the benefit of all involved,” Edano said at the Japan Myanmar Association’s inaugural party. 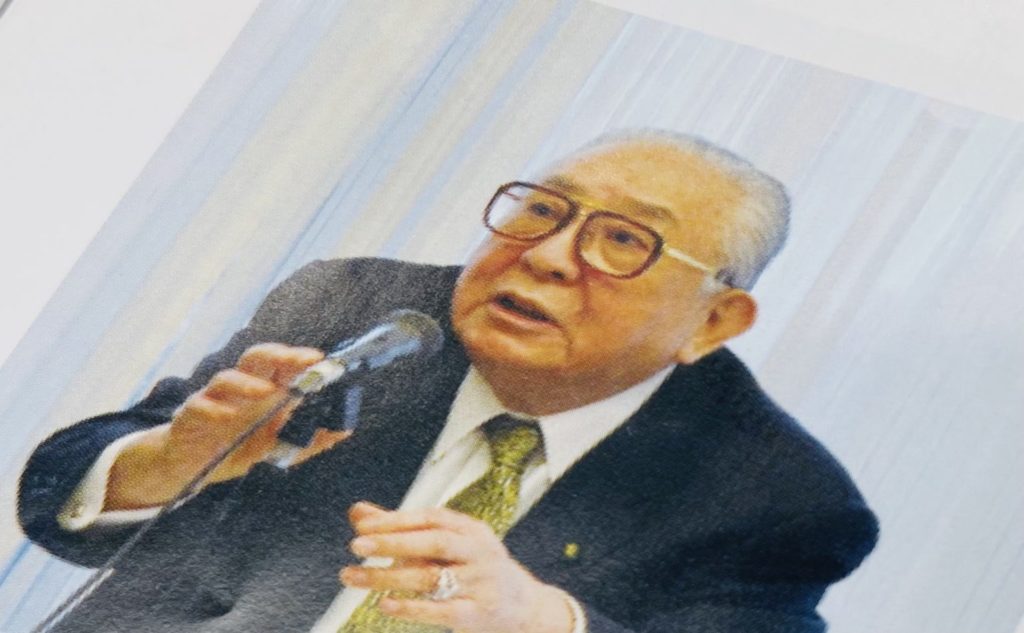 Chairman Hideo Watanabe speaks in front of top officials from various ministries, including the Ministry of Foreign Affairs. Photo from the January 2021 issue of Myanmar Focus.

The construction of Bago River Bridge, which connects the Thilawa SEZ to Yangon and is funded through Japanese ODA, is subcontracted to a subsidiary of the military-operated Myanmar Economic Corporation (MEC). MEC is currently under economic sanctions from the U.S. following the February 2021 coup.

In fact, its re-ascension to power allowed the Myanmar military to become more involved in the management of the Thilawa SEZ because MJTD, the local company running the zone, is jointly funded by the governments of Myanmar and Japan.

Amid the military’s increased involvement in Thilawa, in June 2021 the Japan Myanmar Association published to its website new materials promoting the economic zone to Japanese corporations. The materials introduced the services provided by MJTD, such as utilities and human resources, and noted the number of businesses active in the zone.

Tansa was curious whether Chairman Watanabe was still intent on bringing Japanese business into Thilawa, despite its ties to the Myanmar military. However, Watanabe didn’t respond to our request for comment.

(Originally published in Japanese on June 25, 2021. Translation by Annelise Giseburt.)

Previous article Next article
Myanmar Left for Dead: All articles