In the first article of this series, Tansa reported how the state-owned Japan Bank for International Cooperation (JBIC) contributed 5 billion yen (about $46 million) to help finance a development project built on land owned by the Myanmar military. The military receives roughly 230 million yen (about $2.1 million) in annual rent payments from the project.

Japan has yet to entirely cut off support for Myanmar following the military’s February 2021 coup. It remains complicit in the junta’s financial gains, even as the latter continues to slaughter civilians.

We looked for clues to help explain Japan’s reluctance to withdraw from the country in “Myanmar Focus,” a series of activities reports published since 2012 by the Japan Myanmar Association, which promotes business between the two countries. Although in theory only association members have access to the 35 reports published up to now, Tansa located copies at the National Diet Library and from an association member.

Based on information in “Myanmar Focus” and other reporting, Tansa learned that the Japanese government wrote off 500 billion yen (about $4.6 billion) in debt for the Myanmar government in 2013, during the administration of former army general President Thein Sein.

Loans from the Japanese government include citizens’ tax money. What made the government decide that it would be worth it for this substantial sum to never come back? 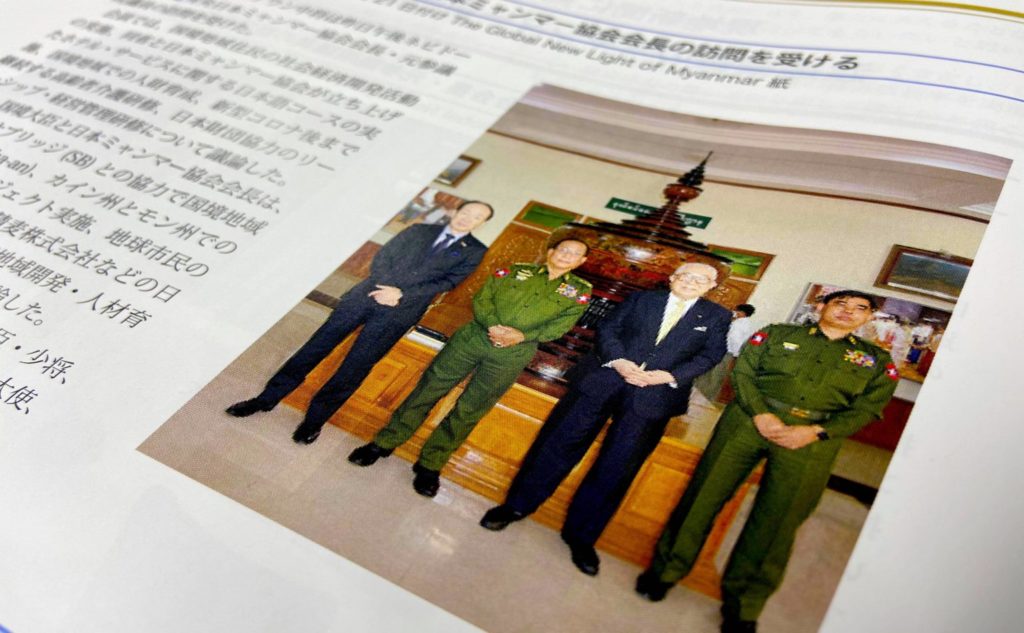 On Jan. 20, 2021, just before the coup, Japan Myanmar Association Chairman Hideo Watanabe (second from the right) met with top members of the Myanmar military. Photo from the 35th issue of “Myanmar Focus.”

Min Aung Hlaing: “Japan, the country in which we most place our trust”

On Oct. 10, 2019 — roughly a year and four months before his coup — Myanmar Army Senior General Min Aung Hlaing attended a reception at a swanky Tokyo hotel hosted by the Japan Myanmar Association and the Nippon Foundation, the latter of which donates an average of 25 million yen (about $230,000) to the former every year. It was Min Aung Hlaing’s third visit to Japan. Other reception guests included Japan Myanmar Association officers and Japanese politicians hailing from both the majority and minority political parties, including the following.

Min Aung Hlaing, dressed in a black suit and deep purple tie rather than his military uniform, stood to give a speech in front of a folding screen emblazoned with gold leaf. To the left hung the Myanmar flag, to the right Japan’s.

“Japan is the country with which Myanmar has the best relationship, in which we most place our trust,” he said. “The unpleasant events of the past are merely lessons for the present.”

“Japan kindly reduced Myanmar’s debt, and it is impossible to put into words how much this act of benevolence lightened the hearts of our people.”

Debt the size of the national budget

In the preceding years, Myanmar’s national budget was roughly the same amount as its debt to Japan, putting the country in a bind. There wasn’t enough money to establish new infrastructure, such as power plants, to support Myanmar’s economic growth, and foreign aid and investment had stagnated.

However, 2011 saw the U.S. and EU lift their economic sanctions on Myanmar following the release of political prisoners such as Aung San Suu Kyi. With a population of roughly 50 million and rich mineral resources, expectations were high for Myanmar, which had been dubbed “Asia’s final frontier.”

Yoshito Sengoku, who had served as chief cabinet secretary when Japan’s Democracy Party was in power, was among those with a keen interest in the country. He hoped that cancelling Myanmar’s debt could open the door for Japanese businesses to expand into the so-called frontier.

Sengoku was deeply involved in the Japan Myanmar Association, serving as vice chairman and deputy for the chairman since the association was founded in 2012 until his death in 2018.

Although Aung San Suu Kyi had been released from prison, former general Thein Sein was still president. Aung San Suu Kyi met with Sengoku and strongly urged that Japan not write off the $4.6 billion dept, saying it would bolster the administration then in power.

But her argument didn’t hold much weight with Sengoku.

“Even if your party isn’t currently in power, cancelling the debt will allow the current administration to lay the bedrock for people’s livelihoods and establish infrastructure,” he replied. “These things will help you too if your party comes into power, so why shouldn’t you happily accept them?”

“Avoid at all costs”

Japan’s main objective for cancelling Myanmar’s debt was to promote Japanese business in the country — Myanmar would now be in a debt of gratitude, rather than a strictly financial one. In fact, the write off wasn’t the end of it: Japan even added 20 billion yen (about $184 million) in grant aid and a 51 billion yen (about $469 million) loan.

In May 2013, Kunio Umeda, then head of the Ministry of Foreign Affairs’ International Cooperation Bureau, was invited to give a lecture at an extraordinary general meeting of the Japan Myanmar Association.

Umeda began by explaining for the assembled members that he had worked with the cabinet to develop a strategy for infrastructure exports to Myanmar, and that there was a special public-private team dedicated to expanding Japanese business in the country.

“Japan has given Myanmar a yen loan, and we’d like to avoid projects being awarded to companies from China and South Korea at all costs,” he continued. “For us members of the government, this is our earnest wish.”

International rules for assistance to emerging economies are set by the Organisation for Economic Co-operation and Development’s (OECD) Development Assistance Committee (DAC). DAC had made the following recommendation to its member countries, including Japan.

“Decrease the amount of aid ‘with strings attached’ that exchanges assistance for projects awarded to businesses from one’s own country.”

But Umeda was of the opinion that Japan could have its cake and eat it too.

“Currently, [Japan’s] relevant ministries are putting their heads together to try and work out a system by which we can both abide by international rules while also giving Japanese businesses an advantage when it comes to getting awarded projects.”

Umeda then made the following request for cooperation to the Japan Myanmar Association as the ministries considered their plan.

“The DAC closely monitors whether or not there are violations of its rules. As such, I think it’s necessary to take into consideration that it might be best not to advertise that Japan is implementing these measures. Depending on the situation, there are probably times when it’s best if they are implemented quietly. I ask for your cooperation in those instances.”

Politicians from both majority and minority political parties and government bureaucrats were united in their plan to promote Japanese business in Myanmar.

We’ll take a look at one of their “success stories” next time.

(Originally published in Japanese on May 21, 2021. Translation by Annelise Giseburt.)

Previous article Next article
Myanmar Left for Dead: All articles