Newsweek Japan deleted two article from its website following an objection from the Japan Myanmar Association. The articles in question had called the association’s chairman, Hideo Watanabe, “Japan’s puppet master for ODA [official development assistance] business” and noted his connection with the head of the Myanmar military.

The articles had been written by Hiroshi Nagai, a reporter for the news site Nikkan Berita who has extensive experience covering Myanmar. Newsweek had republished Nagai’s articles but then suddenly deleted two of them without an explanation to readers.

Nagai called the deletions, carried out without explanation or a follow-up fact check, “an act of journalistic self-destruction.” 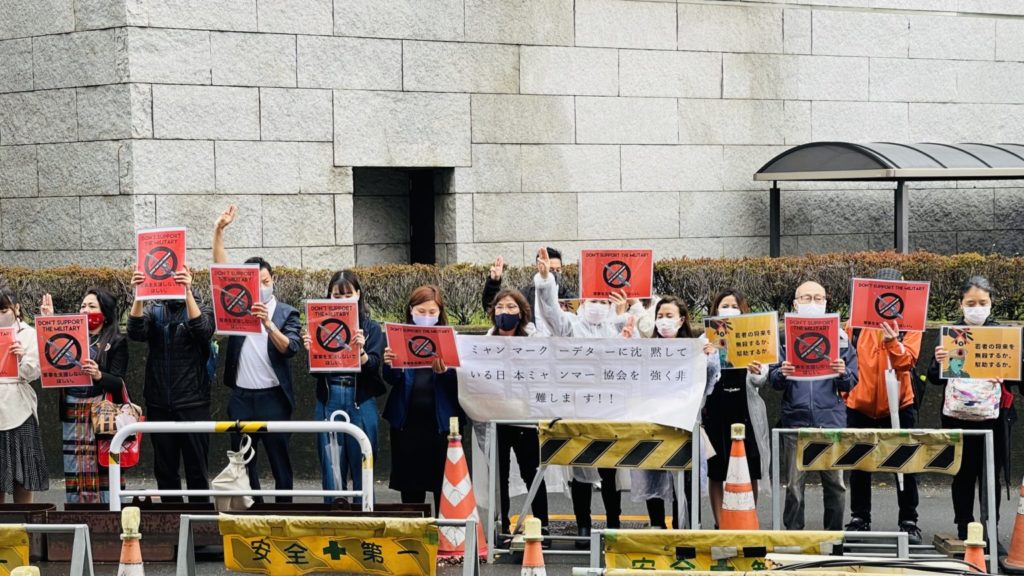 Myanmar citizens living in Japan protest the Japan Myanmar Association’s silence regarding the Myanmar military's coup in front of the association’s office. Photo taken on April 14, 2021 by Makoto Watanabe.

At first, Newsweek pleased by “tons of clicks”

A well-established magazine focusing on international affairs, Newsweek began publishing in the U.S. in 1933, with a Japanese version launching in 1986.

Nagai began his career at Japanese national daily Mainichi Shimbun; he’s been reporting for 56 years. Following retirement, Nagai launched the news site Nikkan Berita, where he works as a reporter. He’s been publishing articles on Myanmar for 26 years, since Aung San Suu Kyi was released from house arrest in 1995.

As the situation in Myanmar worsened following the military coup in February 2021, Newsweek asked Nagai for permission to republish to its website — for free — his series of articles covering events in the country. Nagai and Nikkan Berita Editor-in-Chief Kazuoki Ono agreed, on the condition that Nikkan Berita be credited on Newsweek’s site.

The first article, headlined “Playing on loop the tragedy of Myanmar and the comedy of so-called democratic Japan,” was republished on April 5. It was followed by “Where Japan’s Myanmar policy went wrong: Failure to read global trends, prioritizing ODA business over human rights” and “Blood on Japan’s hands: Support for Myanmar military reveals the true colors of a supposedly peaceful nation.” (Links to the full text in Japanese on Nikkan Berita’s website.)

The articles performed well on Newsweek’s site, according to an email Nagai received from an editor: “They’ve all gotten tons of clicks, it’s great.”

However, on May 31 the Newsweek editor informed Nagai that they had received an objection, sent via content-certified mail, from the Japan Myanmar Association. The editor didn’t specify what had given offense. Nagai felt something was off, and his suspicions were confirmed by the next email he received from the editor on June 4.

“On the advice of our lawyer,” the email read, “and the fact that [the Japan Myanmar Association’s] one-week deadline for a response is approaching, today we deleted the two articles objected to by the association.”

The headlines of the two deleted articles were as follows.

Newsweek never explained what the Japan Myanmar Association had objected to in the two articles, not to Nagai and not to readers.

But Nagai was able to learn the details himself — because the association had also sent a letter of protest to Nikkan Berita, which had originally published the articles. 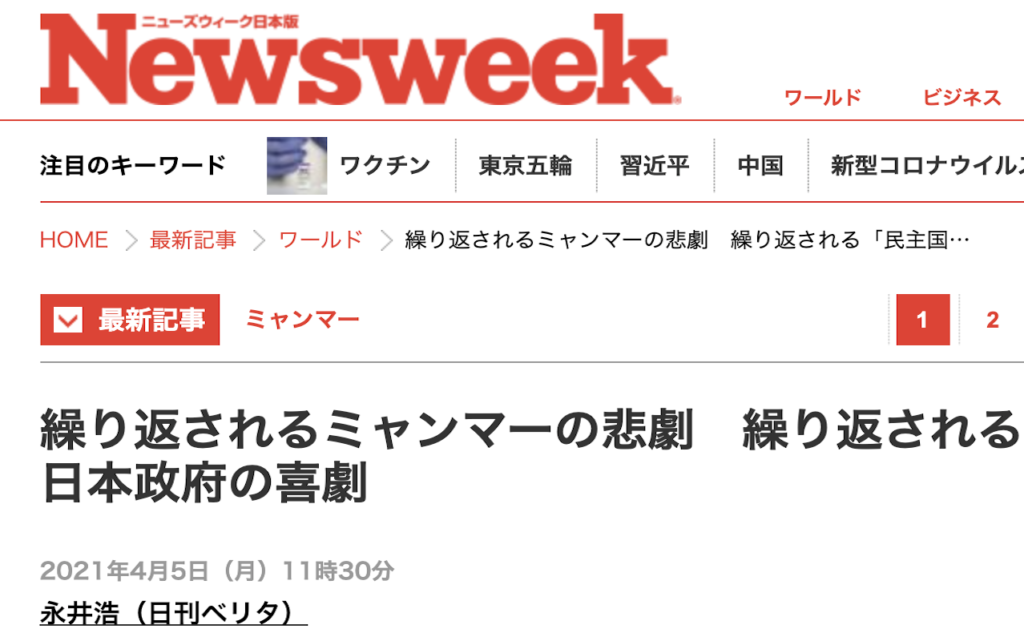 The Japan Myanmar Foundation sent its letter of objection to Nikkan Berita on May 18, over 10 days before it contacted Newsweek.

The objection was to the article “Japan’s puppet master for ODA business met with Suu Kyi and military head just before coup — why?” The letter, signed by Japan Myanmar Association Chairman Watanabe himself, claimed that the article wasn’t factual and demanded a retraction and apology. If Nikkan Berita didn’t comply within a week, the letter noted, the association would be forced to take legal action.

“The article also says that the Japan Myanmar Association ‘can also be seen as a den for ODA business,’ giving the impression that Chairman Watanabe is the head of a secret ring of crooks. This is not factual, and it cannot be called fair criticism.

“Chairman Watanabe, as head of the Japan Myanmar Association, is not motivated by self-interest or lust for power. With confidence and a sense of responsibility, he is truly striving through various activities for a 100-year, mutually beneficial, grand vision for the future of both countries.”

Nikkan Berita responded on May 31 by posting the association’s objection in full, as well as a rebuttal from Nagai, on its website.

“Chairman Watanabe is well-connected with members of the Myanmar military, and he has considerable influence over Japan’s ODA business [in the country],” Nagai’s rebuttal read. “This is the unanimous view of people in Myanmar, Japanese people doing business in Myanmar, and journalists who have reported on the country for many years. Even if Chairman Watanabe claims he is not a puppet master, it remains a fact that those familiar with him see him that way.

“Chairman Watanabe also claims that the phrase ‘[the Japan Myanmar Association] can also be seen as a den of ODA business’ isn’t factual. However, it’s indisputable that many Japanese corporations doing business in Myanmar are members of the Japan Myanmar Association. Additionally, the association has yet to condemn the Myanmar military’s brutal oppression, and some of its member corporations even do business with local companies linked to the military. Myanmar citizens living in Japan are protesting the association’s position — it’s fair to call it a ‘den’ for ‘crooks.’”

After the deletion, Nagai contacted his editor at Newsweek with the hope that the publication would also post his rebuttal, but Newsweek refused to do so.

The full versions of the Japan Myanmar Association’s letter of objection and Nagai’s rebuttal are available on Nikkan Berita’s website (in Japanese).

Newsweek: “A limit to our ability to confirm the facts”

Tansa was curious to know the basis for Newsweek’s decision to delete Nagai’s articles.

The response we received was neither from Kobayashi nor Nagaoka but from digital editor Takeru Ezaka. He said the deletion had been “appropriate,” for the following reasons.

“The digital editorial department was informed that there were factual errors in articles republished from Nikkan Berita. We recognized that there was a limit to our ability to confirm these facts, so we deleted the articles.”

Nagai had a different view of the publication’s responsibilities.

“Even though the articles weren’t written by a Newsweek reporter, as the republisher they should first of all inform the writer that an objection had been made and confirm the veracity of the passages in question — this is basic editorial practice. At the same time, the editor themself should perform an independent fact check.”

Nagai also emphasized the importance of accountability to readers.

“It goes against journalistic ethos,” he said of Newsweek’s lack of an explanation to readers regarding the deletion. “They have avoided taking responsibility, in favor of not rocking the boat.”

Was the proverbial boat really the reason why Newsweek hadn’t given an explanation? In our questions, Tansa asked Newsweek to explain its decision.

“We plan to republish the articles once Nikkan Berita and the Japan Myanmar Association have resolved the issue of the alledged factual errors,” Ezaka responded.

(Originally published in Japanese on July 16, 2021. Translation by Annelise Giseburt.)