Tansa confirmed that Japan’s National Police Agency maintains a suspect DNA database — containing information on roughly 1.2 million individuals — through police documents obtained via a freedom of information request. Every one in 100 citizens’ DNA is registered to the database. In Tokyo, it’s one in 57.

Police even collect DNA for minor offenses, as in the case of Shota Uchino (an alias), who was fishing in an off-limits area. It is unclear whether an individual can have their DNA deleted from the database, even if they are not prosecuted.

Tansa sent a written inquiry containing the following four questions to the director of the NPA’s Public Relations Office on August 14, 2019.

1. What specific crimes are included in the “other” categories of “criminal offenses” and “violations of special laws and regulations” listed in the “Number of registered suspect DNA profiles (total, by prefecture, by crime)” documents we received from the National Police Agency?

2. Is the database wholly comprised of DNA from suspects?

3. Is DNA deleted from the database if the individual in question is not prosecuted?

4. If DNA is not deleted from the database in the event of a non-prosecution, what is the reason for doing so?

“The relevant divisions are preparing a response” — for a month

We gave the NPA’s Public Relations Office until noon on August 19, 2019 to get back to us, but no response came. At first, the office said it would reply within 10 days. But we were still waiting even a month later, on September 19 (the date this article was originally published).

We followed up with the Public Relations Office four times: on August 19 (by fax and phone), August 28 (by phone), September 2 (by fax), and September 19 (by phone).

Why wasn’t the NPA responding to our questions? During our phone calls with the Public Relations Office, we were told the following.

“The Criminal Identification Division is in charge of this matter. Their response will still take some time.” (August 19)

“The relevant divisions are preparing a response. They are aware [that Tansa intends to publish] in August. The relevant persons have been frequently out of the office. The Criminal Identification Division is not the only division involved. The Criminal Affairs Bureau covers various areas.” (August 28)

“We are preparing a response. The Criminal Identification Division is taking the lead.” (September 19)

On September 19, we submitted a freedom of information request in order to learn just what discussions the NPA was having about our questions.

The office of House of Representatives member Tetsuya Shiokawa (Communist Party) had also submitted a written inquiry to the NPA about its suspect DNA database in May 2019.

The inquiry requested details regarding the removal of DNA from the database, which a National Public Safety Commission regulation specified as occurring “when it is no longer necessary to store [the DNA].”

The NPA’s director for criminal identification responded as follows.

In other words, if DNA was collected multiple times from the same individual, the superfluous items would be deleted, leaving a single entry in the database. But that’s just basic organization.

We want to know what happens to a suspect’s DNA if they are found innocent or if the charges against them are dropped. On this matter, the NPA is silent. 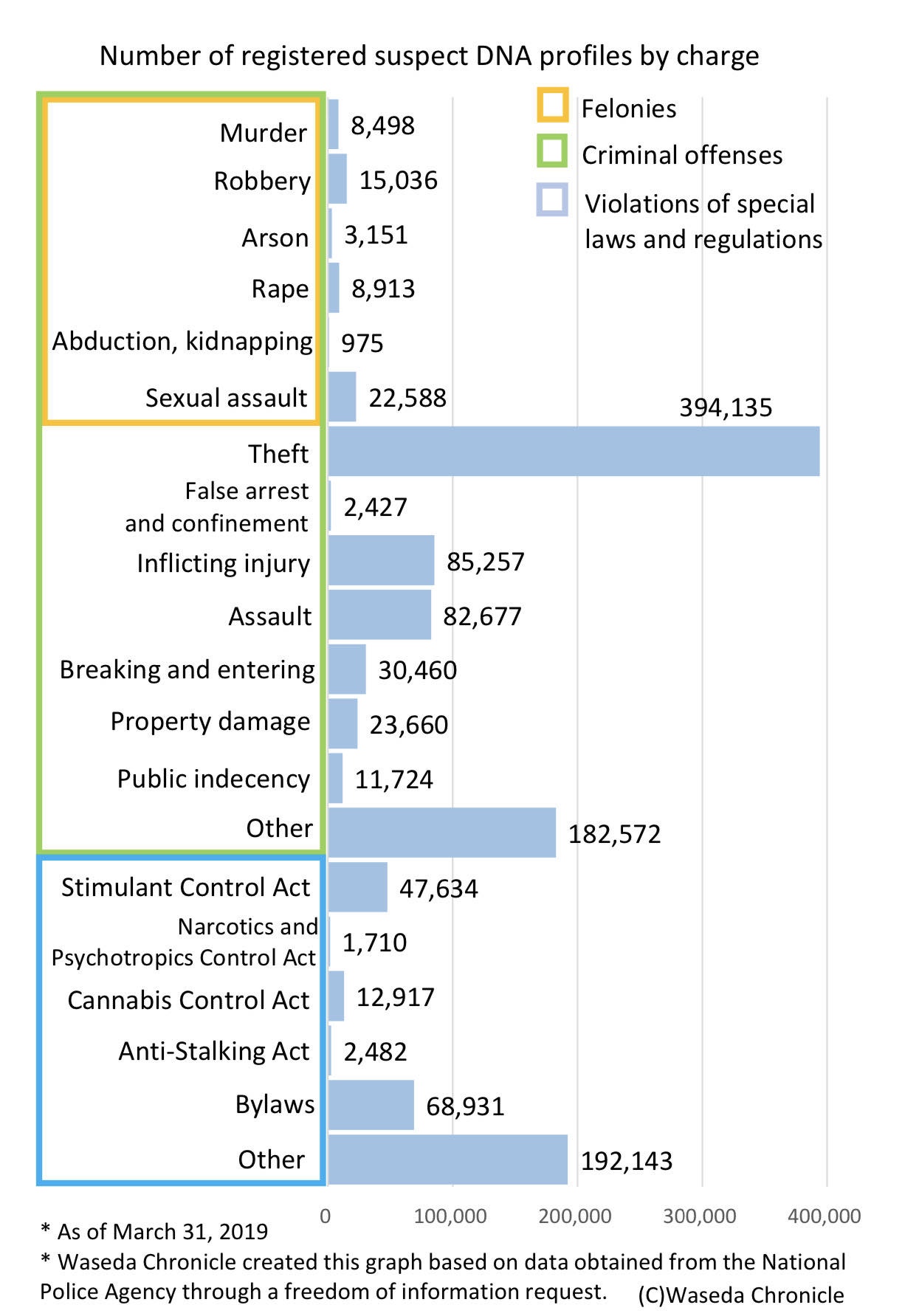 National Police Agency documents divide crimes into “criminal offenses” and “violations of special laws and regulations” such as bylaws. Six criminal offenses, such as murder and arson, are classified as “felonies.”

(Originally published in Japanese on Sept. 19, 2019. Translation by Annelise Giseburt.)