Tatsuya Takemura, a nuclear scientist who had worked for Japan’s former Power Reactor and Nuclear Fuel Development Corp (PNC), disappeared in 1972. In June 2017, I found his name on the National Police Agency’s website among a list of “Cases in which the possibility of abduction [by North Korea] cannot be ruled out.” 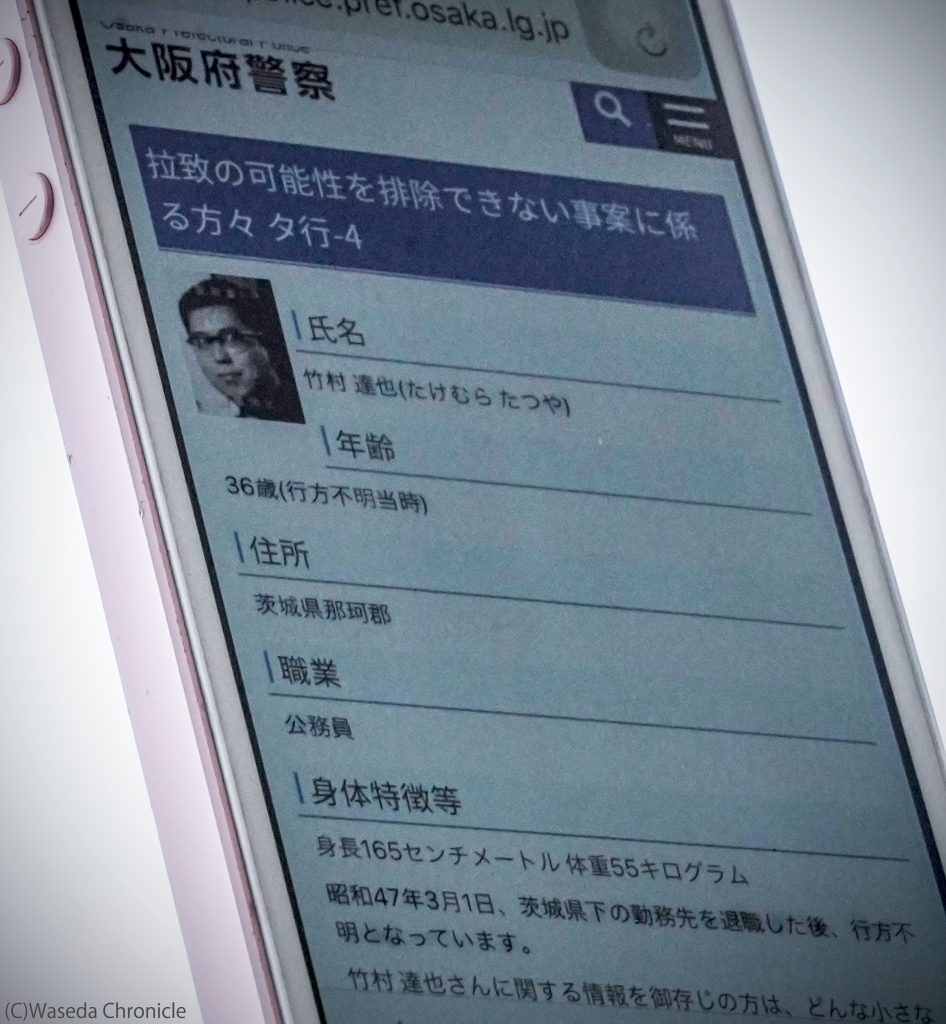 The national list contained 864 names, but the Osaka Prefectural Police had also published a list of the 46 cases pertaining to their jurisdiction. Takemura, who had grown up in Osaka, was among them. His family there had been the ones to report his disappearance, making the Osaka police responsible for his case. The entry was as follows.

Whereabouts unknown since March 1, 1972, when he quit his job in Ibaraki Prefecture.

I soon met with the scientist, Takemura’s former subordinate, to tell him I had found Takemura on the police’s potential abductee list. We rendezvoused at a yakitori restaurant in Tokyo.

“See, it’s just like I said,” he blurted as soon as he sat down. “The detective said Takemura ‘might have been carried off by the North’ — I remember it like it was yesterday.”

The scientist was speaking louder than usual. It made me slightly nervous: We were shoulder to should with other customers in the tiny restaurant.

“But why did the police only list Takemura’s residence as ‘Naka District, Ibaraki Prefecture’ without specifying that he lived in Tokai?” I asked. “And why only say he was a public servant, rather than a PNC employee?”

This time, the scientist lowered his voice.

“Many countries, not just the U.S. and Soviet Union, were racing to develop their nuclear arsenals back then. The police would be in hot water if it came out that, during those days, the head of plutonium production at the government-controlled PNC might have been abducted by North Korea. Writing ‘Tokai’ [which is known for its nuclear facilities] would connect him with PNC — listing his occupation as ‘nuclear scientist’ would be unthinkable.”

Prime Minister Shinzo Abe’s administration was hoping to repatriate abductees. But news that a nuclear scientist may have been among those taken would cause an uproar that the government didn’t need. That was probably the reason for Takemura’s ambiguously worded entry in the potential abductee list.

At the time the list was published on the police’s website, National Public Safety Commission Chairperson Keiji Furuya made the following statement to the commission.

“Given the various responses it could trigger, I ask for your understanding regarding the publication of this list as part of our initiatives.” 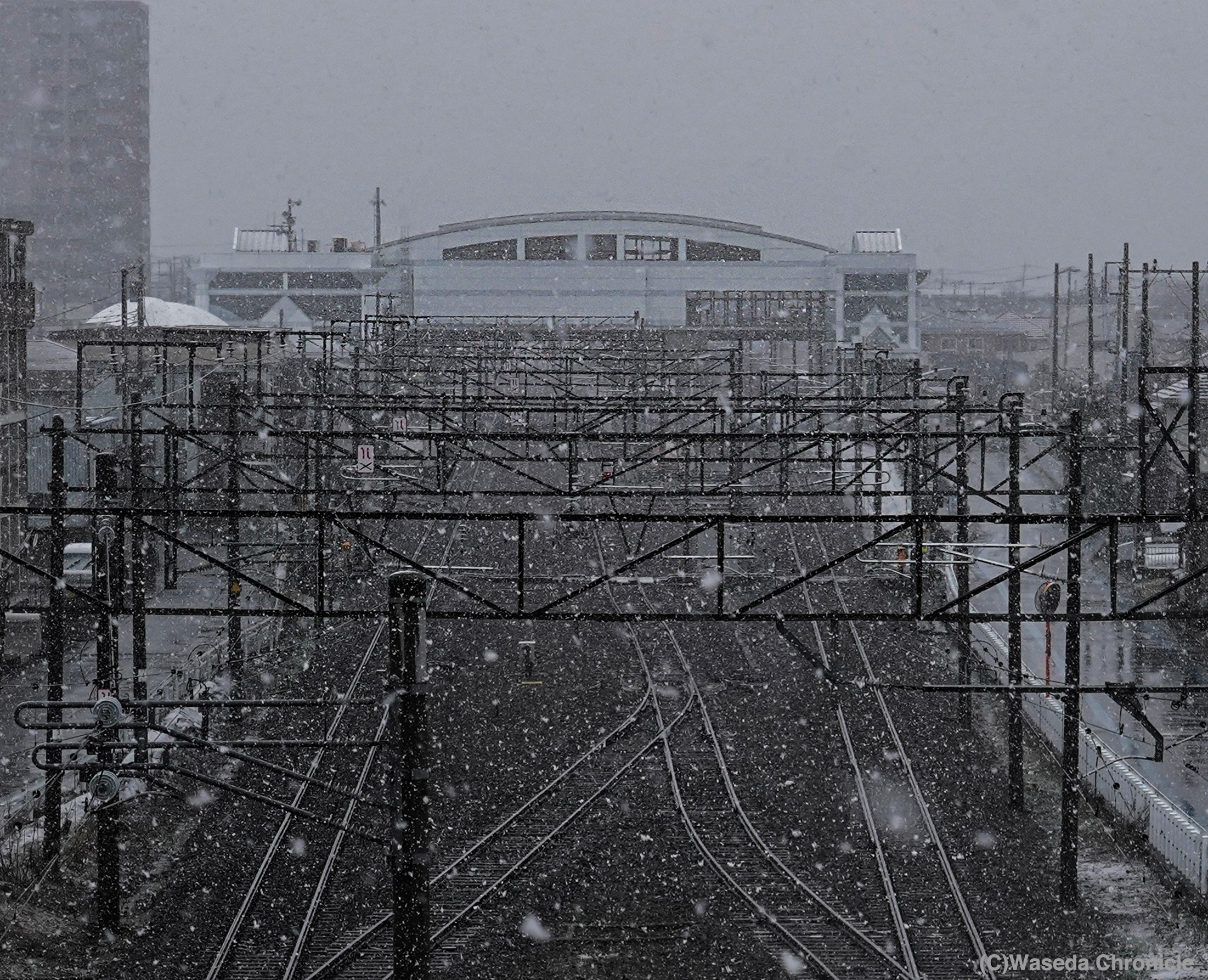 Dorm to work, work to dorm

I asked the scientist what Takemura had looked like.

“He was slightly over 160 centimeters tall, a little chubby, and wore glasses with black frames. Since he was a researcher, he was always in his lab clothes.”

I showed him Takemura’s entry in the police’s list. It gave his height as 165 centimeters, and the photo showed a slightly plump face with black glasses. The scientist’s memory was as good as he said.

“Yes, that’s him!” he said excitedly, gazing at the photo.

I wanted to know more about Takemura’s character.

“He would try to cover up his Osaka accent and speak standard Japanese,” the scientist told me. “He was just incredibly serious and reserved: I don’t think he spoke to anyone when he was off the clock.”

The scientist and Takemura had lived in the same singles dorm, along with about 80 other PNC employees. It lay across the road from the PNC facilities in Tokai.

Dorm residents would often play mahjong and drink together. The younger ones held boisterous mock pro wrestling matches. They ate together in the dorm’s large dining hall.

But Takemura never took part. He never went out either. Dorm to work, work to dorm — that was it. The other residents joked that his hobby must be saving money, that he must be stashing cash beneath his tatami mats.

Another of Takemura’s former subordinates had this to say: “He just stayed in his room and never seemed to use his money for anything. We never interacted with him outside of work, though his being about 10 years older than us might have been part of it. In any case, I don’t think he made any friends like that.”

Still, Takemura was devoted to his job. The scientist, who was still green when he worked under him, remembers one of their exchanges fondly. 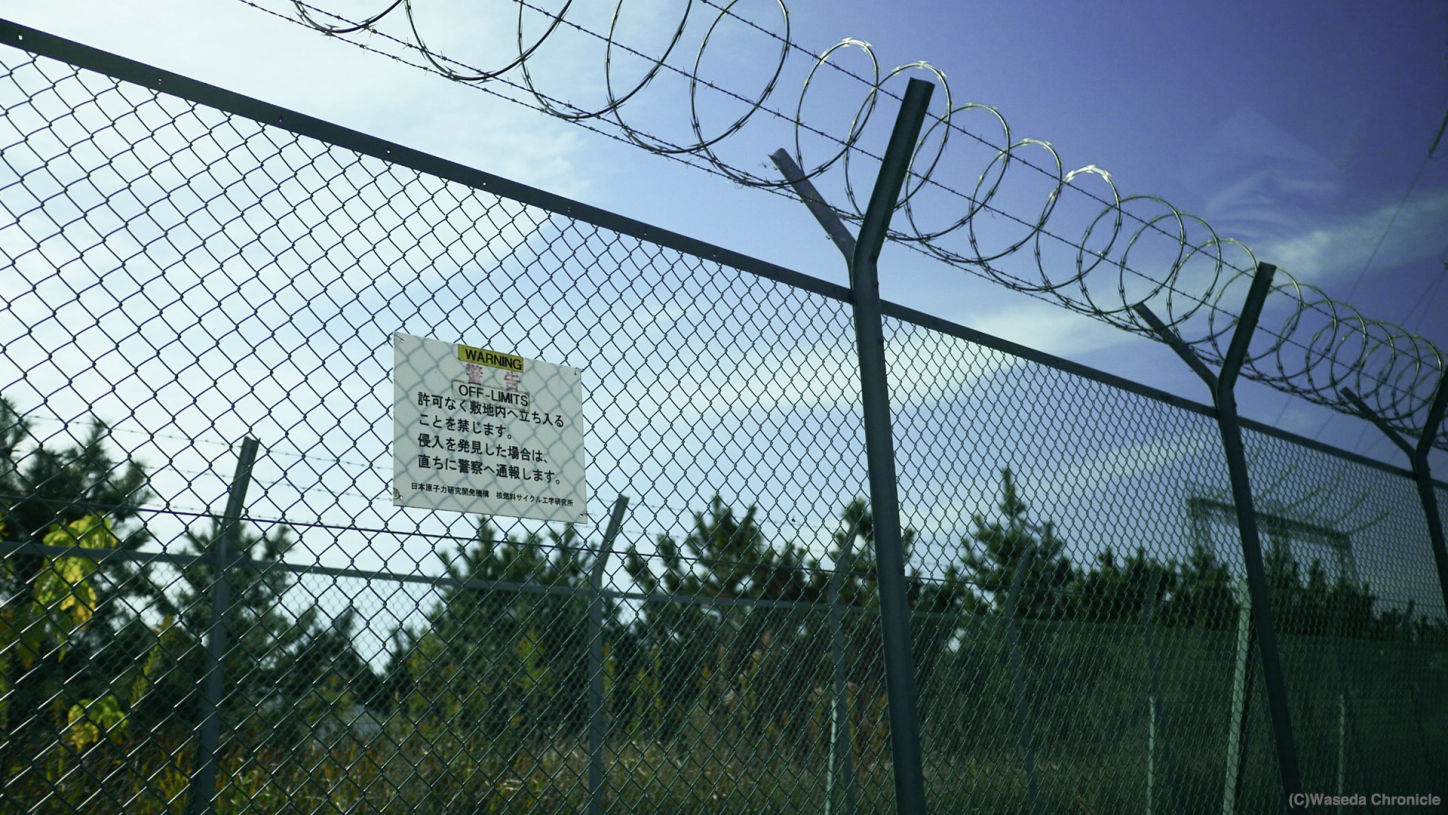 Although Takemura’s former colleagues at PNC couldn’t remember him ever laughing or raising his voice, the scientist had been moved by his professional dedication.

Having just recently entered PNC, one day the scientist asked Takemura how to form a high-quality solid solution of plutonium and uranium. A solid solution refers to multiple elements uniformly mixed and in a solid state.

Takemura had the scientist sit across from him, then he patiently shared points like “A solid solution won’t form properly unless the oxidation level of the plutonium and uranium is just right.” Spreading out his research notes, he explained each point one by one, clearly passionate about the subject. Stacks of English-language books on nuclear science leaned against his desk.

“I was really touched,” the scientist recalled. “He went out of his way to explain things to a newcomer like me. I could see how much he was putting into his job.”

Takemura seemed to have neither debt nor love life to warrant a disappearance. And if he was so devoted to his work, the scientist speculated, he would have no reason to leave it all behind.

I visited Osaka, Takemura’s hometown. After graduating from Tennoji High School, a well-known prep school, he had entered Osaka University’s School of Engineering. Maybe I could find some of his old classmates.

But above all, I wanted to speak with Takemura’s family. The police had only started to investigate his disappearance after his sister came all the way from Osaka to the PNC facility in Tokai to look for him. Maybe Takemura’s family knew something more about the case. I wanted to hear from those who had suddenly lost a loved one.

I was able to figure out Takemura’s schooldays address. It was about a 10-minute walk from Tennoji High School.

However, the neighborhood had been emptied of its former residents to build a highway. I asked around to see if anyone living nearby knew of Takemura. No one did.

But I did learn the address of one of his former Tennoji classmates. Not knowing the man’s phone number, I called on him at home — and was shocked by the first thing he said to me. 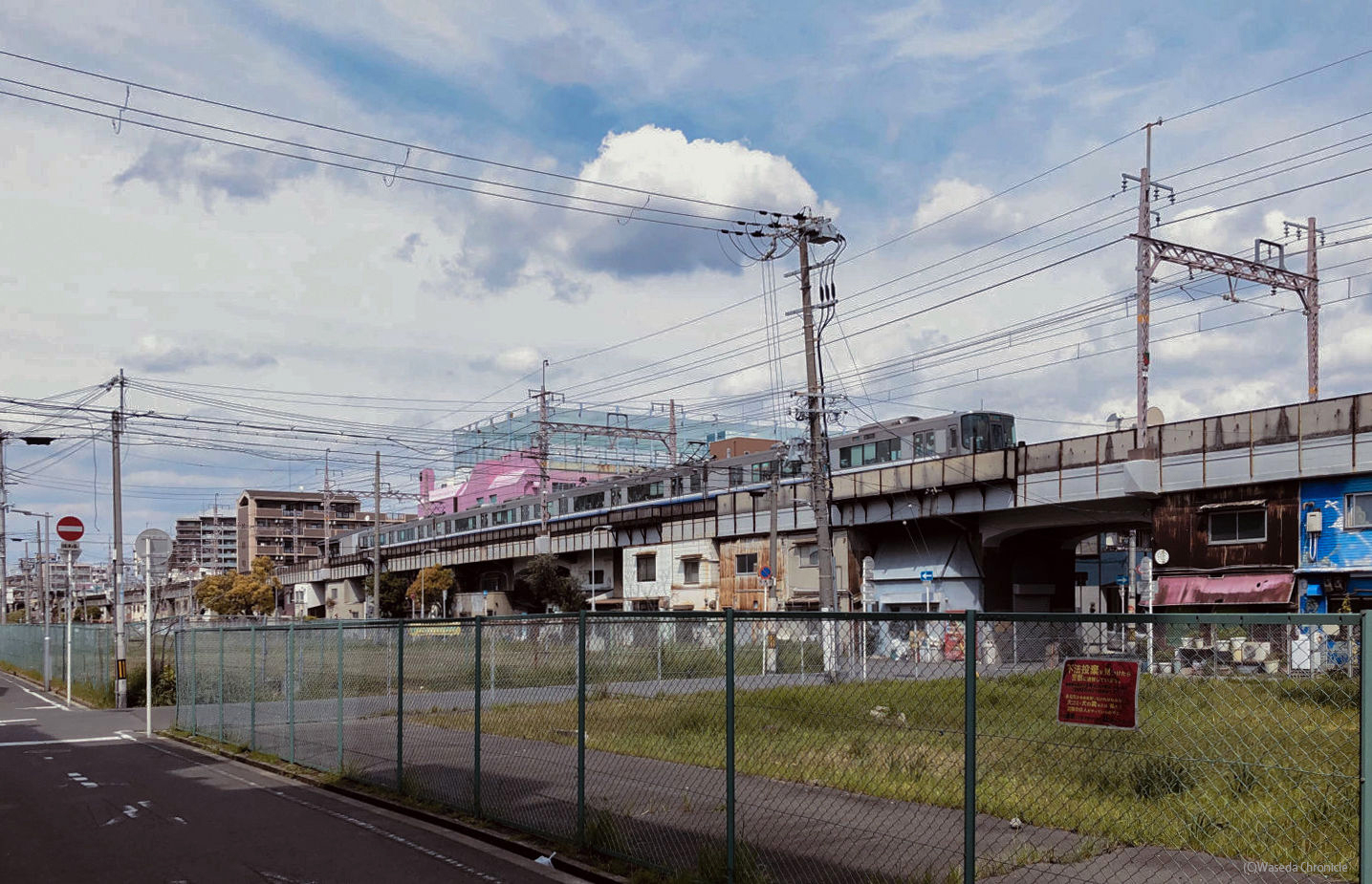 The neighborhood where Tatsuya Takemura lived during his high school days. The place where his house had been was cleared to build a highway. Photo by Makoto Watanabe; 1:36 p.m. on April 11, 2020 in Fuminosato, Abeno Ward, Osaka. (C)Tansa

Call from the Osaka Prefectural Police

In addition to being a prominent prep school, Tennoji was also famous for rugby.

Like Takemura, I too grew up in Osaka. I was part of my high school’s rugby team, and we sometimes had matches at Tennoji. Walking around the school’s neighborhood for the first time in 25 years, I was able to locate one of Takemura’s former classmates.

A man answered when I rang the intercom. I began with “I’m looking for information about a Tennoji High School graduate, Tatsuya Takemura” but was suddenly cut off.

“Oh, is this about the North Korean abduction?”

I had only given him Takemura’s name. How did this man know I was investigating his potential abduction by North Korea? Had some other reporter gotten here first?

The man ushered me inside. He was indeed Takemura’s former classmate.

“I got a call from the Osaka Prefectural Police,” he explained. “About four years ago, I think it was. They asked whether I knew anything about Takemura. They had all sorts of questions, like whether anyone else from Tennoji had gone on to Osaka University’s School of Engineering, or who else had been in Takemura’s class. My high school friends and I get together pretty often, and it turned out that the police had called them too.”

So the Osaka Prefectural Police had been investigating Takemura’s case.

I asked the man whether the police had only requested information, without giving him a reason for their call.

“Let’s see, they said — now where was it again — not Gunma — that’s right, it was PNC in Ibaraki Prefecture. It seems Takemura got hired by PNC out of university. He did nuclear stuff for them, so he might’ve been abducted by North Korea. That’s what they said. My friends heard the same when the police called them too.” 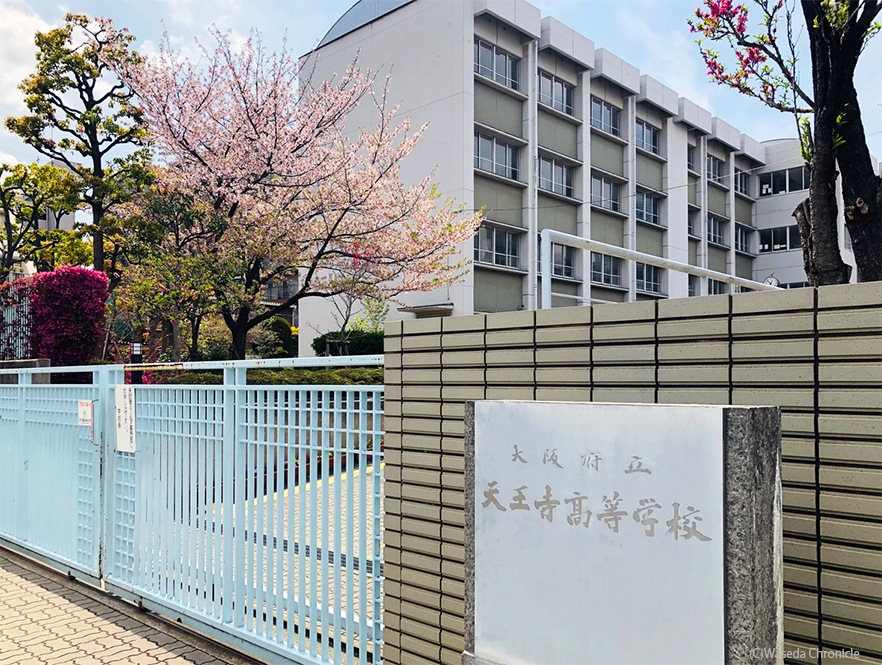 The police had clearly linked Takemura’s disappearance with North Korea. His role as head of plutonium production at PNC was all the more reason for them to suspect abduction.

But when the police had published information about Takemura’s case on their website in 2013, they had written his residence as “Naka District, Ibaraki Prefecture” — not as “Tokai,” which would evoke the PNC nuclear facilities there. His occupation had been left similarly vague: “civil servant.”

PNC was a government-controlled nuclear research organization. And Takemura was a scientist deeply familiar with plutonium, which can be used to form nuclear weapons’ deadly core. Loose-lipped phone calls notwithstanding, the police had not wanted the missing man’s profession to be widely known.