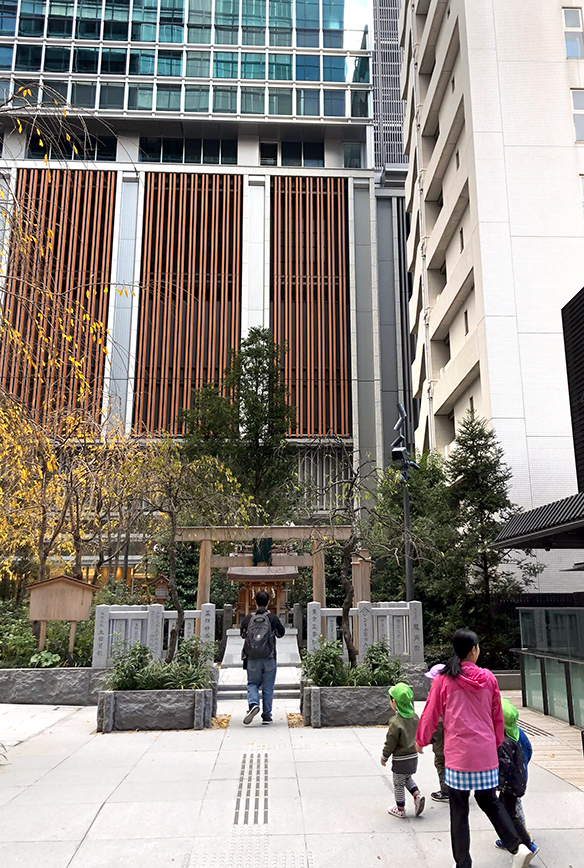 Yakuso Shrine, which honors past medical practitioners, lies near Chugai Pharmaceutical’s head office. The neighborhood once flourished with doctors and medical-related businesses. Photo by Hideaki Kimura; 11 a.m. on Dec. 9, 2019 in Nihonbashi, Tokyo. (C)Tansa

In an article published in an academic journal, breast cancer surgeon Akihiko Ozaki raised his concern that Chugai Pharmaceutical had secretly helped fund a clinical trial of its own drug to treat breast cancer (*1). He found it suspect that the company had given over 200 million yen (about $1.9 million) in donations to a nonprofit funding the trial.

Shinji Ohno, chief of the Cancer Institute Hospital’s Breast Oncology Center and Ozaki’s boss, had co-authored the trial’s findings (*2). In the fall of 2017, Ohno questioned Ozaki about his suspicion three times.

The elder doctor maintained that there had been no foul play.

“The nonprofit receives donations from other pharmaceutical companies in addition to Chugai. Where’s the evidence linking Chugai’s donation to our study?” he asked.

Although Ozaki was empty-handed at the time, evidence appeared in due course.

In the fall of 2018, a year after his meetings with Ohno, Ozaki received an email from an individual familiar with the nonprofit in question, the Advanced Clinical Research Organization.

The individual said they were contacting Ozaki because they had heard about his criticism of the lack of transparency regarding Chugai Pharmaceutical and the clinical trial’s funding.

“ACRO receives donations from various pharmaceutical companies and passes them along to doctors,” the email read. “It’s more laundering organization than nonprofit.”

Laundering is used to obscure money’s true source by passing it through other organizations on its way to a recipient.

Ozaki felt his hunch about the clinical trial’s funding had been right all along.

At the time, Ozaki, as a member of the Medical Governance Research Institute, happened to be working with Tansa to create the Money for Docs database. He told us about the email from the individual familiar with ACRO.

“Publicly declared funding traceable through the Money for Docs database is only half the story. There’s hidden funding out there too,” Ozaki said.

We decided to investigate.

Documents handed over in a café

Three weeks after Ozaki had received the email about ACRO, he came with us to meet its sender. The individual chose a café in the outskirts of Tokyo, far from the nearest station to avoid unwanted attention.

The individual — let’s call them X — was sitting at the table furthest from the door.

“I don’t have any kind of grudge against ACRO,” X said. “I just can’t overlook wrongdoing that might harm patients.”

Then X held out a USB flash drive.

It contained accounting documents indicating that donations from Chugai Pharmaceutical to ACRO had been intended for the clinical trial after all.

We looked at each other in amazement.

*1: Ozaki, Akihiko, 2017, “Conflict of Interest and the CREATE-X Trial in the New England Journal of Medicine,” Science and Engineering Ethics (Retrieved Dec. 9, 2019).