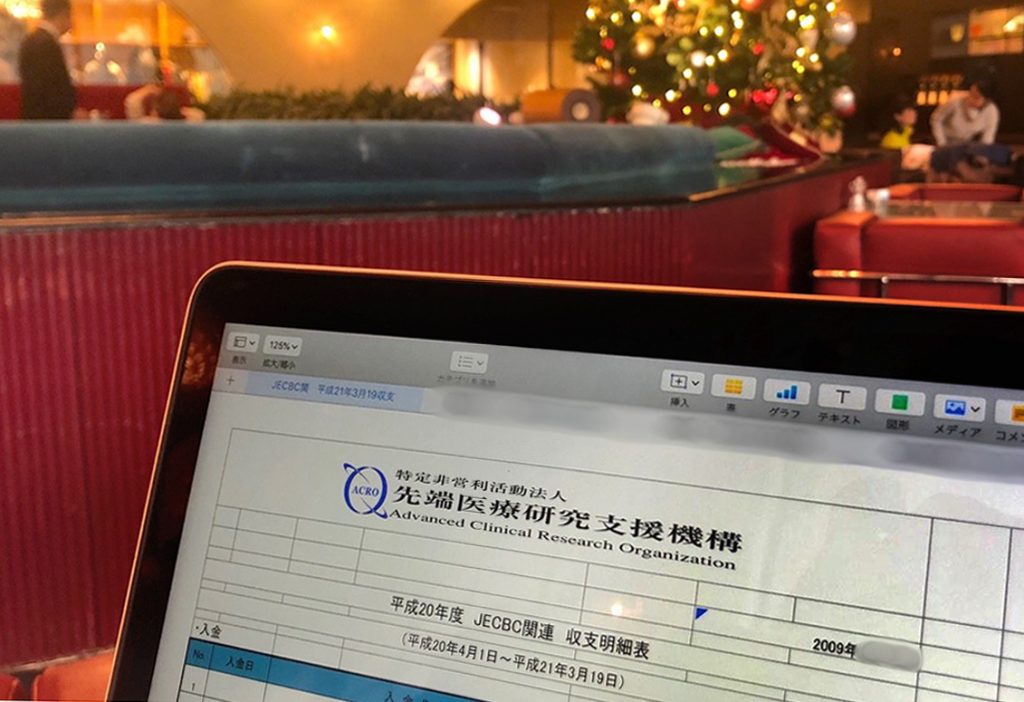 Tansa teamed up with breast cancer surgeon Akihiko Ozaki to investigate whether Chugai Pharmaceutical had secretly funded a clinical trial of its own anticancer drug. Ozaki suspected that the company had, in order to ensure the results were to its advantage, funneled significant funds to the doctors conducting the trial through a nonprofit called the Advanced Clinical Research Organization.

In the fall of 2018, Ozaki was contacted by a whistleblower. X, an individual familiar with ACRO, said they had evidence of the money trail.

We met with X at a café in Tokyo. “ACRO is no ordinary nonprofit. It launders money for pharmaceutical companies and passes it on to doctors,” X told us before handing over a USB flash drive.

The USB was full of ACRO documents neatly organized into folders.

The documents recorded not only contributions from pharmaceutical companies but also things like meeting refreshments purchased at convenience stores. There were over 600 pages in all.

We got straight to the point: “Which documents contain the clearest proof that Chugai Pharmaceutical gave money specifically for the breast cancer trial?”

Since 2012, the JBCRG’s representative director has been Shinji Ohno, chief of the Cancer Institute Hospital’s Breast Oncology Center and the same celebrated doctor who had questioned Ozaki three times about his suspicions regarding the clinical trial. Many of the group’s other members were also noted breast cancer specialists in Japan (*1).

The JBCRG had conducted the clinical trial of Chugai Pharmaceutical’s anticancer drug Xeloda. It had published its findings, that Xeloda dramatically lowers the risk of recurrence in breast cancer patients, in a world-renowned medical journal (*2). The publication followed articles by research groups outside Japan that hadn’t found the drug to have such a significant effect.

“The number indicates the specific JBCRG clinical trial. The Xeloda breast cancer trial is designated as 04,” X replied. The same information can be found on the JBCRG’s website (*3).

We were looking at an accounting document for the clinical trial Ozaki had first raised questions about.

Next, we checked what kind of money the trial had received.

This is an English version, created by Tansa, of the original Japanese spreadsheet.

“Chugai Pharmaceutical Co., Ltd.” was listed as the payer. That means:

“The money from Chugai was designated for the clinical trial of the company’s own drug,” X said. The Xeloda trial began in February 2007. This accounting document shows that Chugai Pharmaceutical supplied funds from six months before the trial began through its early period.

“So the trial had strings attached from the very beginning,” Ozaki said.

We repeatedly met with X as we combed ACRO’s internal documents for more proof linking Chugai’s money with the clinical trial.