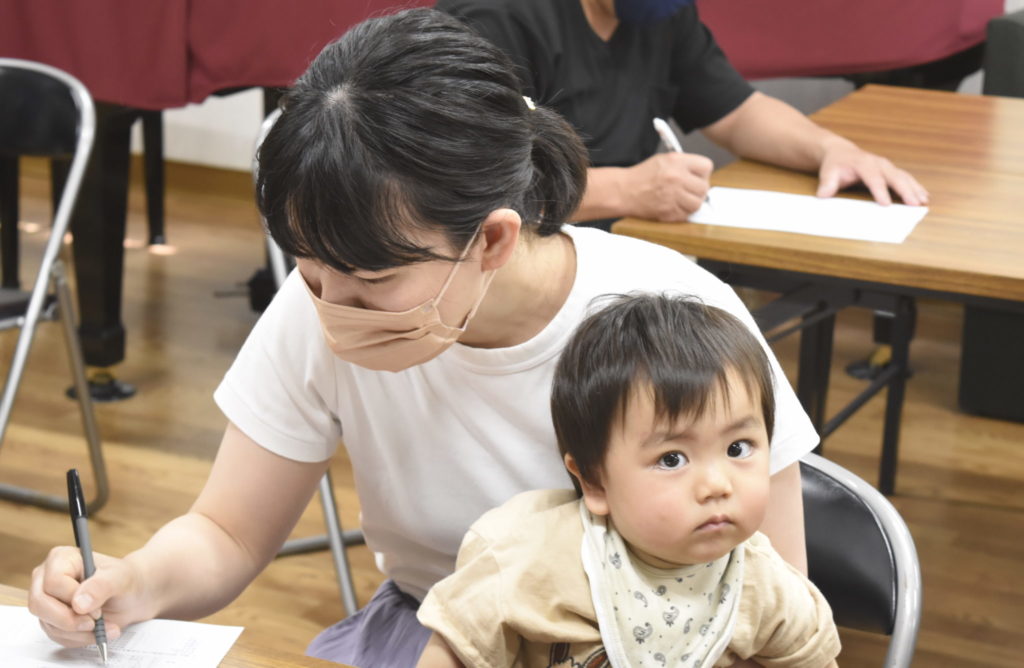 Mari Watanabe fills out a medical questionnaire before having her blood taken in Settsu City, Osaka Prefecture, on June 5, 2022. Photo by Nanami Nakagawa.

On June 5, 2022, Mari Watanabe (36) arrived at a house in Settsu City, Osaka Prefecture, with her 15-month-old son. The house was a 10-minute walk from Daikin Industries’ Yodogawa Plant.

That day, Kyoto University Professor Emeritus Akio Koizumi and Kyoto University Associate Professor Kouji Harada were conducting blood tests to determine PFOA exposure among Settsu residents. The residents themselves had arranged to use the home for the tests, which were administered to 11 men and women, ranging in age from their 30s to 80s. Watanabe was one of them.

Born and raised in the Befu area adjacent to Daikin’s Yodogawa Plant, Watanabe had attended school near the plant during the period Daikin was manufacturing and using PFOA. She sometimes ate vegetables grown in the area.

Watanabe offered to have her blood analyzed out of concern for her son’s health.

“There’s a chance that PFOA I ingested through eating and drinking also impacted my son when he was in the womb. I heard that PFOA accumulates in the body, so I began to wonder if my son would be ok. I’ve been worried about this for a while,” Watanabe said.

In October 2021, high concentrations of PFOA were found in nine out of nine men living near the Yodogawa Plant who had their blood tested. In 2008, blood analysis using samples from 60 women in Settsu City revealed an average concentration 6.5 times higher than that of uncontaminated areas.

Concerned Settsu citizens formed a group that aims to address the PFOA pollution in their community. On April 4, 2022, they submitted a petition with 1,565 signatures to Settsu City Mayor Kazumasa Moriyama, requesting that the city call for information disclosure and pollution countermeasures from Daikin. Watanabe, who works as a nursery school teacher and is a mother herself, also signed the petition. She believes “speaking up like this is the best thing we adults can do for our children.”

On March 29, 2022, prior to the citizens group submitting their signatures, Settsu city council also unanimously passed a written statement calling for the national government to address to the PFOA pollution.

Daikin, however, continues to evade responsibility for the pollution it caused. The company told residents and the city council that it would “not perform any survey or cleanup” outside the Yodogawa Plant’s premises.

While the company was stonewalling, I obtained confidential documents containing information that Daikin had refused to disclose, including the amount of PFOA emitted from the Yodogawa Plant. With this data, it was undeniable that Daikin was the source of the pollution.

An anonymous tip in envelope from Daikin’s Yodogawa Plant

I first learned of these confidential documents on April 20, 2022, during a visit to the Uzumasa neighborhood in Kyoto to interview Kyoto University Professor Emeritus Akio Koizumi.

Koizumi, a pioneer in PFOA research in Japan, began a nationwide investigation into PFOA pollution in 2002. His Kyoto University team found that residents of the Kyoto-Osaka-Kobe area had the highest levels of PFOA in their blood; that the Aigawa River, which flows through Settsu, had the world’s highest recorded levels of PFOA; and that Daikin’s Yodogawa Plant was the source.

During our interview that day, Koizumi suddenly said, “Come to think of it, someone at Daikin tipped me off a long time ago.”

I had interviewed Koizumi many times, beginning in June 2021, but this was new information. “What does he mean, ‘tip’?” I wondered, uneasy.

“Hello? It’s Koizumi. Do you remember those documents from Daikin I received a long time ago? Are they still there?”

The call finished, Koizumi explained to me, “Actually, many years ago, I received documents about PFOA from someone at Daikin.”

He explained that, on the afternoon of May 17, 2005, he received a sealed envelope — white, A4-size, and bearing the Daikin logo and Yodogawa Plant contact information — at his Kyoto University lab. The sender hadn’t written their name. The envelope was postmarked from Suita, a city in Osaka Prefecture near Daikin’s Yodogawa Plant, and inside were several stapled documents.

Since he didn’t know the sender, Koizumi did not analyze the documents thoroughly, nor made them public.

However, over the ensuing 17 years, neither did he forget them. The documents were marked “confidential.”

“I leave it to Tansa. Please investigate this. Other media won’t report on Daikin’s PFOA pollution,” Koizumi said.

The documents were kept in Harada’s laboratory. I hailed a cab and hurried to the Kyoto University School of Medicine.

At the lab, Harada was waiting for me with the Daikin envelope containing the documents.

“It contains a lot of information, from the PFOA production process at the Yodogawa Plant to emission levels. Go ahead and take the original copy,” he said.

Names in documents were Daikin employees

The envelope contained three documents, a total of 17 pages. The names of the person in charge of a survey of PFOA emissions and the person who prepared the documents had been blacked out with a felt-tipped pen, but they were still visible if you held them up to the light. Later, a Yodogawa Plant former employee and Daikin itself confirmed that they had been employed at the Yodogawa Plant.

“Q&A on PFOA (Draft): Regarding the release of PFOA from the Yodogawa Plant into the environment” (Dec. 8, 2003)

“Opinion (draft) on ‘Survey of Distribution and Situation of Perfluorooctanoic Acid (PFOA) in rivers and bays in Japan’” (Dec. 9, 2003) 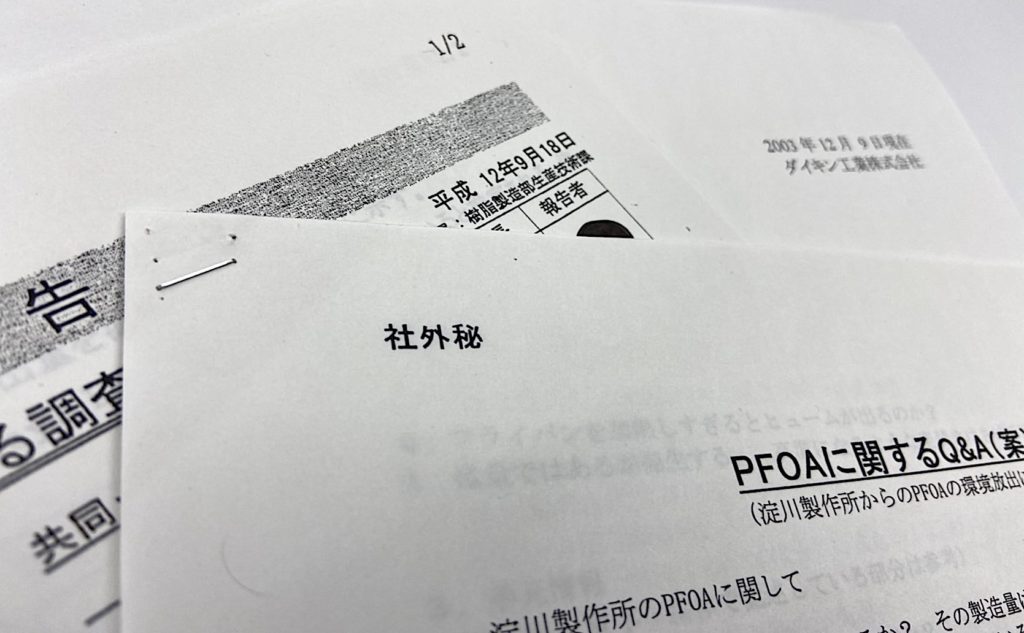 Daikin’s confidential documents were a treasure trove. Of particular importance — because they show the causal relationship between the Yodogawa Plant’s PFOA emissions and the chemical’s high concentration in the surrounding area — were the emission levels and routes of PFOA leaving the Yodogawa Plant grounds.

The “Q&A on PFOA (Draft): Regarding the release of PFOA from the Yodogawa Plant into the environment (Dec. 8, 2003)” included the following information about emissions during the previous fiscal year, 2002.

・Emissions released into the atmosphere from the detoxification tower: approx. 3 tons

However, I didn’t know how to evaluate this 12-ton total. I visited Koizumi again on May 18, one month after obtaining the documents.

“Twelve tons is a huge amount,” he said. “There’s no way it wouldn’t affect the surrounding area.”

“It’s congruent with the high concentrations we found in our surveys of the water and air around the Yodogawa Plant. The emissions [recorded by Daikin] are consistent with the data in our survey results. They fit perfectly!”

But I was even more struck by the following information in the document.

Discharged to a Settsu sewage treatment plant beginning three years ago. Until then, discharged into Kanzakigawa River via ——waterway.

Until three years before this document was prepared — in other words, until around 2000 — wastewater containing PFOA was discharged directly into local waterways.

The waterway mentioned is the Ajifu waterway, a wide channel that runs alongside the west wall of Daikin’s Yodogawa Plant. Until around 2000, many residents used to draw water from it to grow rice and water their crops. 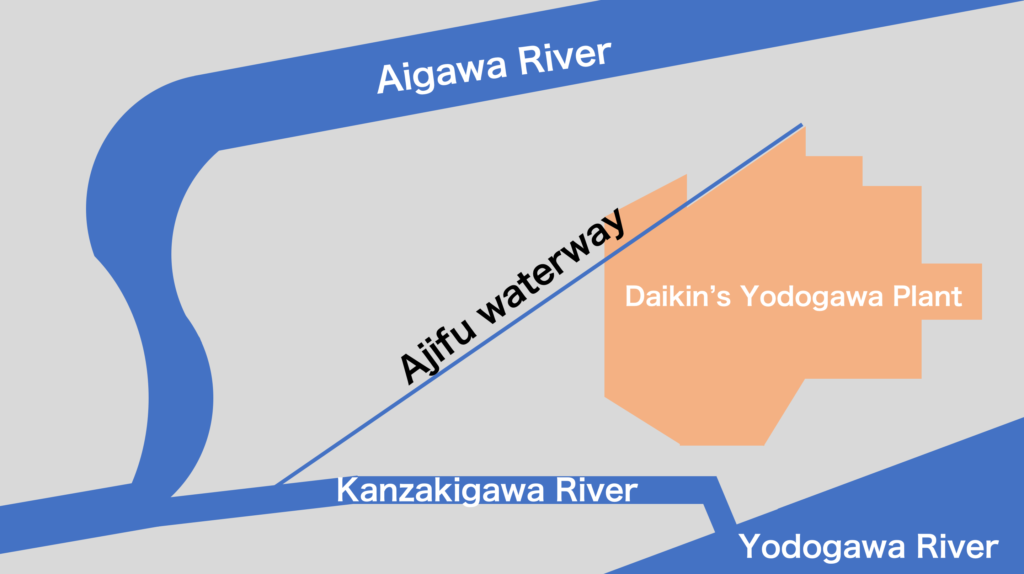 In summary, the Daikin internal documents showed that PFOA wastewater from the Yodogawa Plant was discharged mainly through the following two routes into the Kanzakigawa and Aigawa rivers, which flow through Settsu City. Settsu citizens have been drawing water from these rivers to grow rice and vegetables.

In the documents, Daikin even mentioned the possibility of polluting Osaka Bay.

Up to now, Daikin has withheld information on the amount of PFOA emitted into the water and air and has not taken responsibility for being the source of the pollution. However, with the revelation of the confidential documents, it seemed likely that Daikin would have to admit it had caused the pollution.

I decided to ask Noriyuki Inoue (87), who became president of Daikin in 1994 and still serves as chairman of its board, for his views on the matter. As my request for an interview through the public relations office had been turned down, prior to obtaining these documents, I went directly to his home in Hyogo Prefecture.

(Originally published in Japanese on June 14, 2022. Translation by Annelise Giseburt.)