In 2021, high levels of PFOA were found in the blood of nine men who live near Daikin Industries’ Yodogawa Plant in Settsu City, Osaka Prefecture. But they weren’t the only residents found to have been exposed to the toxic chemical.

Blood tests conducted in 2008 by a research team from Kyoto University also found high levels of PFOA — averaging 6.5 times higher than in non-contaminated areas — in 60 women living in or near Settsu.

It is believed the nine men tested in 2021 had been exposed to PFOA mainly through eating vegetables grown with polluted groundwater.

But the 60 women had not eaten contaminated vegetables. How had they been exposed to PFOA?

A research team led by Kyoto University Professor Akio Koizumi had detected high concentrations of PFOA in women in Settsu.

Daikin, alongside 3M and DuPont, is one of the world’s eight largest PFOA manufacturers.

“I suspected Japan might also be experiencing PFOA pollution, such as around Daikin’s Yodogawa Plant,” Koizumi remembers thinking at the time.

By the 2000s, there was a growing awareness that PFOA exposure can even impact the health of babies in the womb. That’s why Koizumi and his research team decided to investigate whether women in Japan had been exposed to the chemical.

In 2008, they analyzed blood samples from 60 women living in Settsu City, where the Yodogawa Plant is located, or the surrounding area. On average, the women’s blood contained 6.5 times more PFOA than those in non-contaminated areas.

Assuming pollution from the Yodogawa Plant was the source of the women’s PFOA exposure, the question then became: How had they been exposed to it?

At that time, the Kyoto University team had already found that PFOA levels in rivers near the Yodogawa Plant were the highest ever recorded, as we reported in this series’ eighth article, “World’s highest known level of PFOA found in Yodogawa tributary in 2004.”

However, the women whose blood samples were taken had not drunk this water or consumed produce grown with it.

Their survey, which included both the simulation and on-site measurements, revealed that throughout the year Daikin’s Yodogawa Plant was emitting PFOA into the air; it was then dispersed by the wind, the direction of which changed depending on the season.

The Kyoto University team’s paper, which explained the possible correlation between the women’s PFOA exposure and emissions from the Yodogawa Plant, was published in leading environmental health journal “Environmental Science & Technology.” 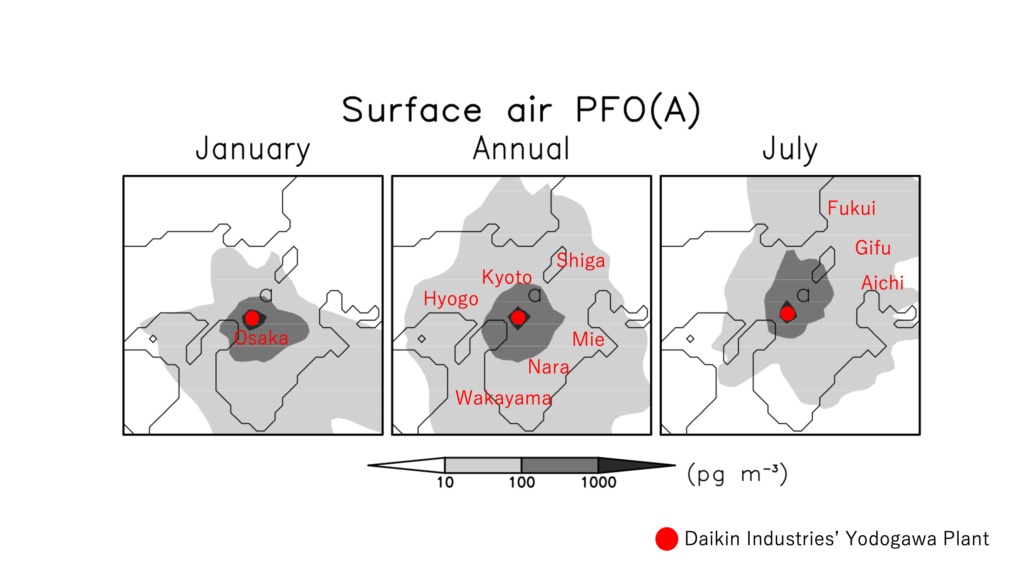 From left to right: PFOA concentrations in the atmosphere in January, the annual average, and in July. PFOA is diffused by the north wind in January and by the south wind in July. From the Kyoto University team’s research paper “Long-term simulation of human exposure to atmospheric perfluorooctanoic acid (PFOA) and perfluorooctanoate (PFO) in the Osaka urban area, Japan.” (Red added by Tansa.)

23% of PFOA emissions in manufacturing process released through air

Other research supports the conclusion that PFOA could have been emitted from the Yodogawa Plant in multiple ways.

DuPont once commissioned an independent agency to examine how PFOA generated in its manufacturing processes was leaving plant grounds.

The survey found the following.

Daikin: “Although our interpretation differs, we will refrain from commenting”

Based on their findings, the Kyoto University team was concerned about the effect PFOA might have on exposed mothers and unborn babies. Their paper contained the following warning.

“Recent epidemiological studies have suggested that PFOA may have adverse health effects on fetal growth at much lower serum concentrations in mothers than those observed in females of Settsu in 2008. For this reason, adverse health effects on fetal and neonatal growth should be evaluated epidemiologically in the population within a 4.5 km radius of the Daikin plant.” 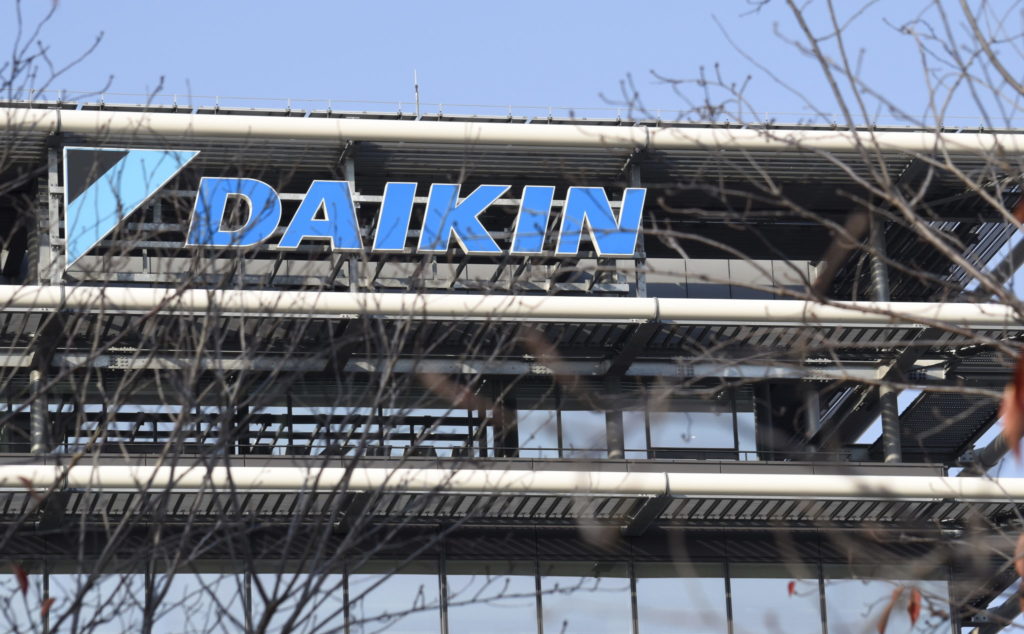 Tansa shared the Kyoto University team’s paper with Daikin and asked if the company was aware of airborne PFOA emissions from its Yodogawa Plant, as well as how it viewed its responsibility therein.

“Although our interpretation differs, we will refrain from commenting on the content of the Kyoto University paper,” the Daikin public relations department responded.

(Originally published in Japanese on March 18, 2022. Translation by Annelise Giseburt.)