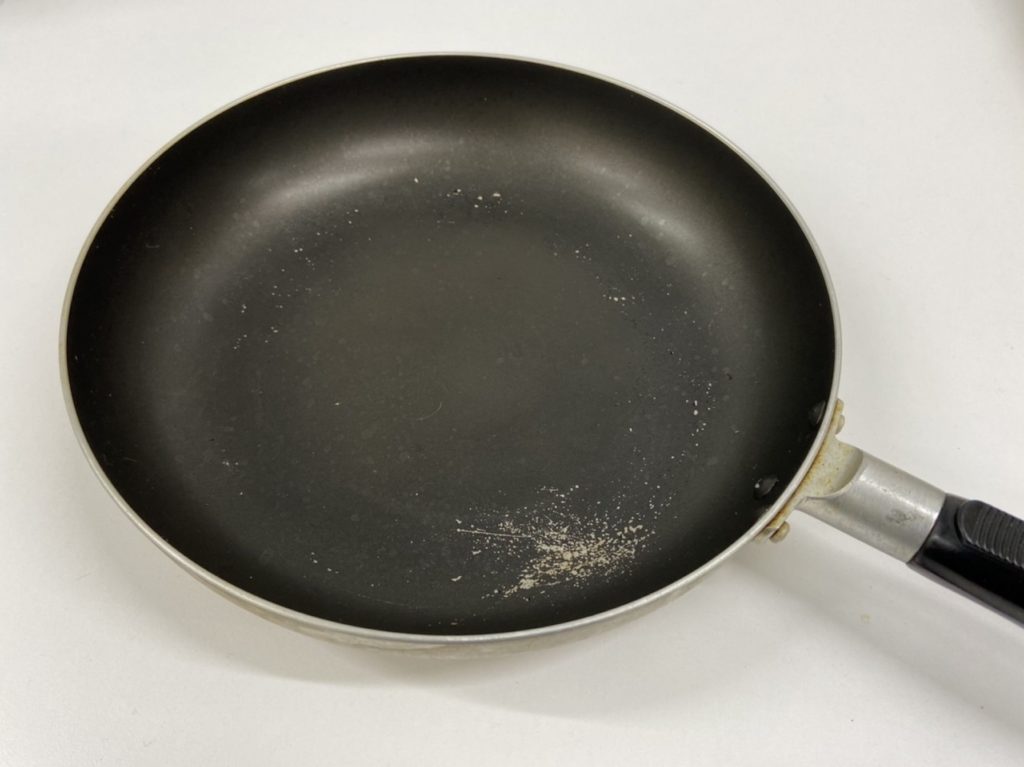 A fluorinated, non-stick frying pan (donated by a reader)

Studies conducted around the world have shown that PFOA can cause health problems such as cancer and thyroid disease. At a PFOA manufacturing plant in the U.S., two out of a total seven pregnant workers exposed to PFOA gave birth to children with eye disorders. In 2019, PFOA was added to the Stockholm Convention on Persistent Organic Pollutants, banning it in countries party to the convention.

However, minutes of a tripartite meeting between Daikin Industries, Osaka Prefecture, and Settsu City revealed that Daikin, which manufactured the chemical, had denied its health effects.

Is my frying pan safe?

In November 2021, the movie “Dark Waters,” which depicts PFOA pollution in the U.S., was generating some buzz on Japanese Twitter. One user posted a link to the movie trailer alongside a photo of a box for a frying pan that specified it didn’t use PFOA.

They commented: “I’ve been choosing frying pans at home improvement stores based on their size, weight, and price, but this time I made sure to get one that’s PFOA-free.”

The user had learned from the movie trailer that PFOA had been used in some fluorinated, non-stick pans.

Replies to the tweet included “I had no idea [about PFOA]!” and “My frying pan is from Iris Ohyama, but their website wouldn’t open properly for me so I gave up looking [for information on their PFOA use] last night😂”

Having noticed the name drop, the official account for Iris Ohyama, a consumer goods manufacturer, jumped into the exchange.

“Please excuse our interruption. We apologize for any worry caused, and please rest assured that PFOA is not used in our products. Thank you very much.”

Even without being directly asked, Iris Ohyama was quick to assert that its products were PFOA-free. After all, PFOA’s health effects have been globally recognized.

But was Daikin, which manufactured the chemical for many years, of the same opinion?

A study conducted among 69,000 individuals in the U.S. by the C8 Science Panel, the results of which were released in 2012, was a major milestone in understanding PFOA’s negative impacts on human health.

The study was triggered by a lawsuit against DuPont, a PFOA manufacturer, by residents near one of its plants who had been exposed to the chemical. The suit was settled in 2004, with DuPont paying $70 million to the residents. The settlement also included a provision that DuPont would pay $5 million to support an epidemiological study, to be conducted by the above-mentioned independent C8 Science Panel, which was formed for the purpose.

The study, taking place over seven years, confirmed that PFOA exposure can cause the following six diseases.

“They were the biggest human health studies ever done on any chemical,” Robert Bilott, the lawyer who helped residents sue DuPont, said in an interview with Tansa. “They were conducted by independent scientists who looked at all of the data and confirmed [that PFOA] was linked to those six diseases. The companies are still denying that to this day, but the science is there.”

Daikin refered to PFOA’s “environmental” rather than “health” effects

Even after the results of the U.S. epidemiological study were released in 2012, Daikin still refused to acknowledge PFOA’s health effects.

The Daikin Group’s 2013 CSR report, published in June of that year, describes PFOA as “a fluorine compounds of concern for its environmental impact,” without mentioning any health effects.

But, with each passing year, the chemical’s dangers were increasingly difficult to ignore.

At a December 2016 tripartite meeting between Daikin, Osaka Prefecture, and Settsu City, a city representative questioned whether there might be health risks in their polluted community as well.

“We at Daikin Industries don’t believe there are,” a company representative responded, also questioning the results of another U.S. epidemiological study that had linked PFOA exposure with reproductive diseases and liver cancer.

“What are the main points in the U.S. lawsuits?” asked a Settsu City representative.

Daikin responded: “That PFOA gets into people’s bodies and causes disease, that it’s unacceptable to have such a substance in one’s body. In a lawsuit against DuPont, a link was found between PFOA and people’s medical histories (kidney, etc.). 3M, Chemours, and other manufacturers are currently being sued.”

Although Daikin shared information about the U.S. lawsuits, including that links with health problems had been established, the company refrained from expressing its own views.

The rest of the world didn’t share Daikin’s hesitance. PFOA was banned under international law in May 2019, when it was added to the Stockholm Convention on Persistent Organic Pollutants. In December of that year, the European Environment Agency published a report on the health effects of organic fluorine compounds, including PFOA, based on the results of studies conducted in various countries.

The number of adverse health effects were expanded from the original six published in the 2012 U.S. study to 16, with the following eight identified as “effects that occur with high certainty.” 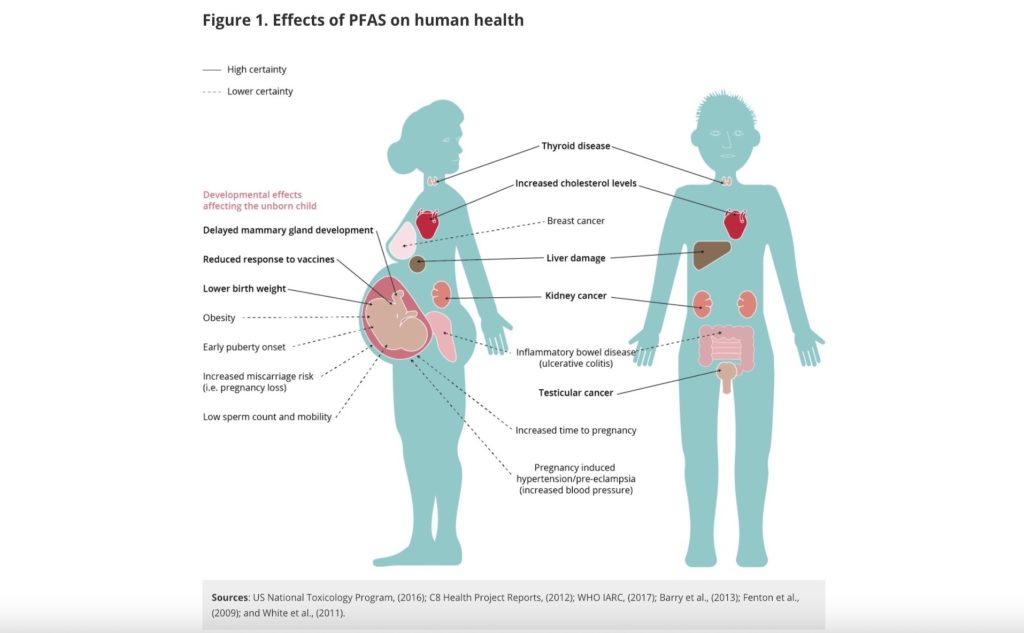 The effects of PFAS, which include PFOA, on human health. Taken from the European Environment Agency website.

The home page of Daikin’s website doesn’t contain any information about PFOA. To find it, one has to take the following steps (on the Japanese website).

1. Click on the “Fluorochemicals” banner on the home page.
2. Hover over the “Our Business” tab at the top of the page.
3. Click on “Sustainability” (the fourth from the top).
4. Click on “Our Initiatives on PFOA” toward the bottom of the page.

The “Our Initiatives on PFOA” page begins with two logos for the Sustainable Development Goals (SDGs): SDG 6 “Clean water and sanitation” and SDG 12 “Responsible consumption and production.”

The page’s text informs readers that the company ended PFOA production in 2015, with the stated reason being that it was “part of our efforts to manage chemicals in a sustainable manner.”

However, the text made no mention of health effects.

(Originally published in Japanese on Feb. 11, 2022. Translation by Annelise Giseburt.)