Coercive soliciting even during Covid-19 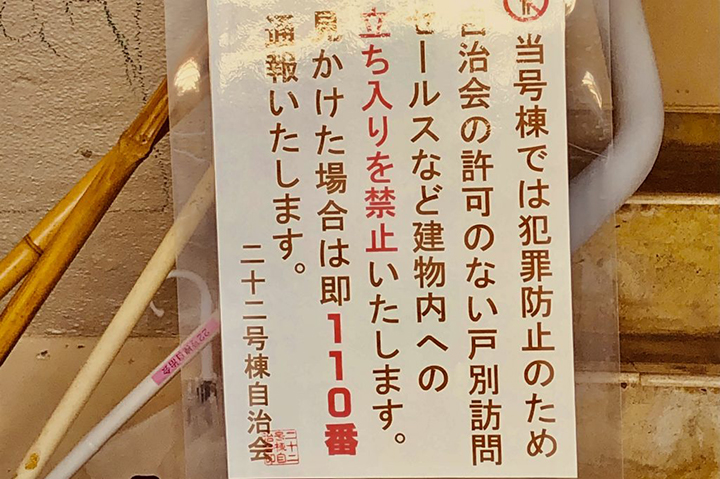 Sign posted at an apartment complex with aging residents in Tokyo’s Shinjuku City: “In order to prevent crime, unauthorized entry such as door-to-door soliciting is prohibited. Offenders will be reported to the police.”

Seniors are one of the groups at high risk from Covid-19. We wondered whether concern for their safety had tempered newspaper sales activities during the pandemic.

To find out, Tansa filed a freedom of information request with the National Consumer Affairs Center of Japan for complaints and requests for advice regarding newspaper sales and elderly individuals. We asked for records from April and May 2020, during which time the country had been under a state of emergency in an attempt to curb the spread of Covid-19.

Based on a previous freedom of information request, we knew that 106 such complaints had been submitted in January 2020, before the virus arrived in Japan. April 2020 saw 148 complaints specifically related to elderly individuals, with 126 in May as well.

Based on complaints and requests for advice from April and May 2020 reviewed by Tansa, newspaper solicitors remained as persistent as ever despite the pandemic. Here are some examples that stood out.

“I work as a comprehensive caregiver. Yesterday, one of my elderly clients, who lives alone, was visited by a solicitor and ended up taking out a six-month subscription, to start next month. But they weren’t given a copy of the contract. What should we do?” (April 2020)

“My mom lives alone. She was visited by a newspaper solicitor, who kept up his pitch for a whole 30 minutes. My mom has bad eyes and has trouble reading. She tried turning him down a number of times, but he just kept insisting, and she ended up taking out a subscription. We want to cancel it.” (April 2020)

“My elderly mother, who lives alone, was visited by a solicitor from another prefecture. She refused, but he just wouldn’t leave. The solicitor was wearing sunglasses, and it made my mom nervous.” (April 2020)

“A newspaper solicitor visited my mom, who is a senior and lives alone, and just wouldn’t take no for an answer. She caved and took out a two-year subscription starting three years from now.” (April 2020)

“A newspaper solicitor came by a week ago; I turned him down. But he was back again four days later, when I was out, and managed to make a sale with my elderly mother. I wish he would leave us alone.” (May 2020)

“My mom’s in her 90s and lives alone. She took out a two-year subscription from a newspaper distributor. I want to cancel it.” (May 2020)

“My dad is nursing care level 2 [requiring assistance at least three times per day], but he took out a newspaper subscription. I want to negotiate with the distributor, but they refuse to call me back. Please call [and advise me what to do].” (May 2020)

One case had been submitted by an individual worried about care facility employees, who were worn out trying to protect their elderly charges from the virus.

“I live in a retirement home and currently subscribe to a paper. The staff here are exhausted dealing with Covid, and I don’t want to make their job more difficult by having a paper delivered. But when I tried to cancel my subscription, I wasn’t allowed to. Is it really not possible?” (May 2020)

Woman with dementia scared into subscribing

We compiled the cases related specifically to individuals with dementia.

Elderly individuals with dementia often aren’t able to seek redress themselves, and complaints received by consumer affairs centers are usually sent by family members or caregivers who’ve discovered what happened. In all likelihood, there are more cases out there.

The following are specific incidents of individuals with dementia falling prey to coercive newspaper sales in April and May 2020.

“I heard from my elderly mother’s care manager that she had taken out a newspaper subscription. My mom lives alone and has dementia; she’s at nursing care level 2. I want to cancel the subscription.” (April 2020)

“For your information: My mom, who has dementia and lives alone, was visited by a newspaper solicitor. She got scared and ended up taking out a subscription. The local consumer affairs center helped us get the subscription period shortened.” (April 2020)

“My mother has dementia, and I’m acting as her guardian. I cancelled her newspaper subscription, but then the paper started getting delivered again — I don’t understand. What should I do?” (April 2020)

“My mom has dementia and took out a number of newspaper subscriptions without me realizing. I found the contracts today. How can I cancel them?” (May 2020)

“My mom, who has dementia, took out a newspaper subscription, but the contract lists a totally unknown name as ‘head of household.’ I would like to cancel and have the subscription fees returned.” (May 2020)

“My older sister, who is getting on in years and has dementia, took out a newspaper subscription after being visited by a solicitor from a distributor, but she doesn’t understand the terms of the contract. I would like to cancel the subscription and decline any further solicitation.” (May 2020)

The complaints we examined also contained the following.

“I have a job delivering newspapers. I know of cases where solicitors for another paper pretended to be the grandson [of our readers] to convince them to cancel their current subscription and subscribe to the solicitor’s paper instead.” (April 2020)

“My grandmother was approached on the sidewalk by a newspaper solicitor who just wouldn’t take no for an answer. She ended up taking out a three-month subscription to start in January next year, but she wants to cancel.” (May 2020)

“My mother’s subscription to a newspaper had ended, but she told a representative from the paper her bank account number, and they went ahead and signed her up for another subscription. What should we do?” (May 2020)

From these examples, it’s hard to imagine that newspaper solicitors changed their tactics during the pandemic.

Tansa sent questions to newspapers throughout Japan, asking whether their distributors employed sales tactics such as the above, and, if so, how they were addressing the issue. We’ll share their responses next time.

(Originally published in Japanese on Feb. 27, 2021. Translation by Annelise Giseburt.)