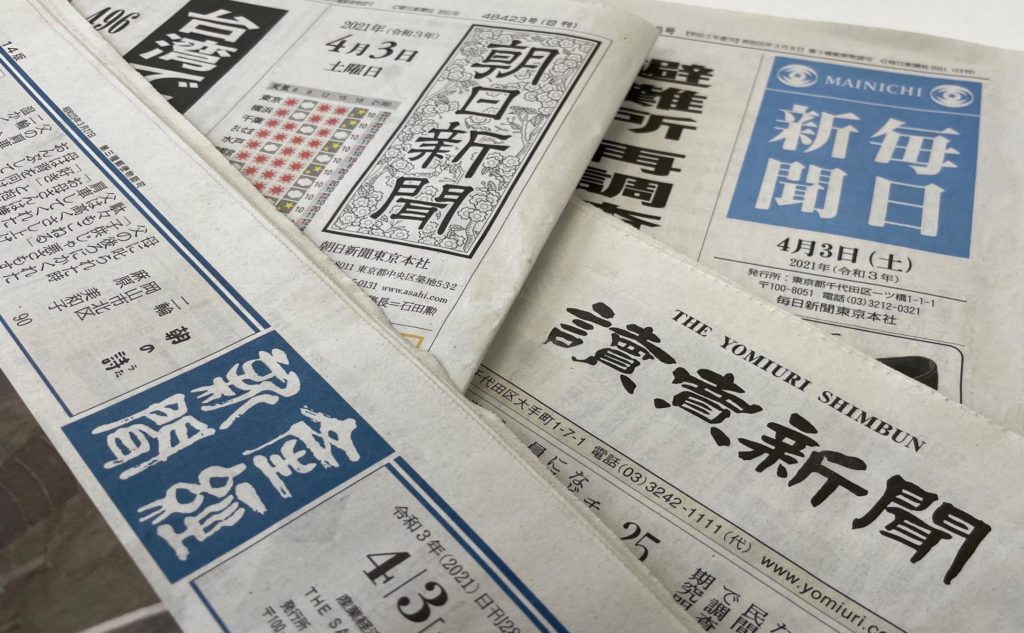 In this series, Tansa has reported on the frequency of elderly individuals, including those with dementia, being pressured into taking out newspaper subscriptions. From the data we have examined, it appears that the National Consumer Affairs Center of Japan receives over 100 complaints and requests for advice per month regarding newspapers and elderly individuals.

We were curious how Japan’s papers themselves view this issue, and whether they were taking any steps to prevent it. In January 2021, Tansa sent questions to 50 papers across the country.

A total of 21 responded, including four of Japan’s national papers: the Mainichi, Asahi, Nikkei, and Sankei. Among the various answers, we noticed a difference between the national and regional papers.

Mainichi Shimbun: The issue “has not been totally eradicated”

We asked each newspaper the following two questions.

1. Are you aware of any coercive soliciting of elderly individuals, including those with dementia, taking place among your distributors?
2. If you are aware of it, what countermeasures have you taken?

Here’s how the national papers responded. None of them, aside from Nikkei, denied the existence of coercive soliciting.

The Mainichi Shimbun acknowledged that it had received complaints related to coercive soliciting and the elderly.

“We frequently remind our distributors to conduct appropriate soliciting, including of the elderly, such as through making sure that they always abide by relevant laws and regulations when conducting sales activities. We do not discuss specific complaints or inquiries with outside parties. That said, although the number of complaints has decreased, [the issue] has not been totally eradicated, and we will continue working to improve the situation.”

The Asahi Shimbun didn’t give a clear answer.

“Our business operations, such as soliciting for subscriptions conducted by our distributors, are in compliance with laws and regulations. If trouble, not limited to cases involving elderly individuals, occurs in the course of sales activities, we offer regular guidance in order to quickly make improvements.”

The Sankei Shimbun was similarly vague.

“We regularly offer guidance to our distributors, which are our business partners, to ensure that they always abide by the rules governing newspaper sales, including compliance with the Specified Commercial Transactions Act. We ask that they exercise further caution to avoid trouble with consumers, especially elderly individuals.”

We didn’t receive a response from the Yomiuri Shimbun, even after following up over the phone.

The Nikkei Shimbun, a financial newspaper, make it clear that there was no coercive soliciting among its distributors.

“We have received no complaints or inquiries regarding the issue you raised. We instruct our employees and distributors to always abide by the rules governing sales, including the Specified Commercial Transactions Act. If a problem is identified, it will be strictly dealt with.”

Unlike most of Japan’s national papers, all of the regional papers that responded to our questions denied the existence of coercive soliciting among their distributors.

The Fukui Shimbun replied that it conducts periodic hearings with consumer affairs centers in Fukui Prefecture to check whether there have been any complaints or requests for advice regarding newspapers.

“We keep a record of all our sales staff,” the paper continued. “We make sure they always wear a name tag and that they completely and properly fill out the subscription form. We also hold periodic trainings and information exchanges.”

The Tokushima Shimbun said that its distributors sign an agreement with all 24 cities, towns, and villages in Tokushima Prefecture to check in on elderly individuals that they interact with through their work.

“Making sure elderly individuals are doing ok is part of their job,” the paper wrote. “They also proactively cooperate with initiatives by the ‘consumer protection network’ established by municipalities to prevent bank-transfer fraud.”

The Chunichi Shimbun replied that its distributors hold periodic meetings with the main consumer affairs centers in Aichi Prefecture.

“We also hold hearings regarding any complaints or inquiries from readers related to sales, including those involving our distributors. At our most recent meetings with consumer affairs centers, we did not find any specific cases in need of guidance for improvement, including the coercive soliciting of elderly individuals that you mentioned.”

The other papers responded that they had no information about coercive soliciting of elderly individuals among their own distributors.

Daily Tohoku Shimbun: “There is no coercive soliciting at our paper.”

Kitanippon Shimbun: “Although we are aware of consumer trouble involving elderly individuals from National Consumer Affairs Center materials, we have not heard of any cases among our own distributors.”

Shinano Mainichi Shimbun: “We are not aware of any coercive soliciting of elderly individuals at our paper. We routinely instruct our distributors to avoid this kind of issue.”

Yamanashi Nichinichi Shimbun: “We are unaware of any instances of the sort of conduct you describe. We have received no particular complaints, etc.”

Gifu Shimbun: “We are unaware of any complaints or inquiries regarding coercive soliciting.”

Nara Shimbun (the paper didn’t offer an official comment, but the person in charge of sales replied as follows): “In the past two years that I’ve been in charge, I haven’t heard of any cases at our paper related to coercive soliciting of elderly individuals.”

Ehime Shimbun: “We have no information of any cases such as you describe among our paper’s distributors.”

Kochi Shimbun: “We have had no complaints or inquiries.”

Chugoku Shimbun: “We have received no information about this issue and are not aware of any instances at our paper.”

Nishinippon Shimbun: “We require our affiliated distributors to always conduct appropriate business activities to all individuals, including the elderly, and we instruct them not to solicit minors or individuals whose mental faculties seem impaired. We are unaware of any subscriptions that takes advantage of individuals with dementia such as you described.”

Okinawa Times: “There is no coercive soliciting among our distributors, and we have received no reports from the Okinawa consumer affairs center about newspaper soliciting.”

No response from 29 papers, including Yomiuri Shimbun

When papers didn’t respond by the deadline we had given, we followed up by phone and email. Nevertheless, 29 papers never offered a response to our questions. Out of Japan’s national papers, only the Yomiuri Shimbun refused to comment.

The papers that did not respond are as follows.

(Originally published in Japanese on April 6, 2021. Translation by Annelise Giseburt.)