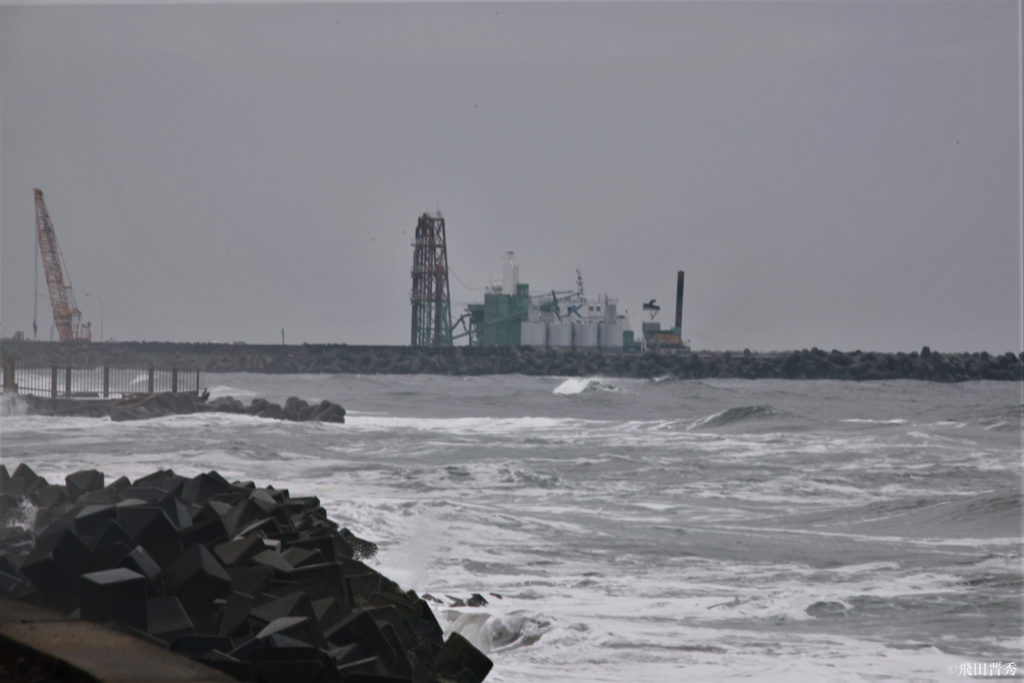 At 2 p.m. on March 12, 2011, the day after the Tohoku earthquake and tsunami crippled the Fukushima No. 1 nuclear power plant, Okuma mayor Toshitsuna Watanabe departed his town, believing its evacuation complete. But contrary to Watanabe’s assumptions, 277 patients and residents still awaited rescue at Futaba Hospital and adjoining retirement home Deauville Futaba.

Only three staff remained at the two facilities from that evening until dawn on March 14: Futaba Hospital Director Ichiro Suzuki, and the director and office head of Deauville Futaba. While looking after their 277 charges, the three scoured the deserted area for help. 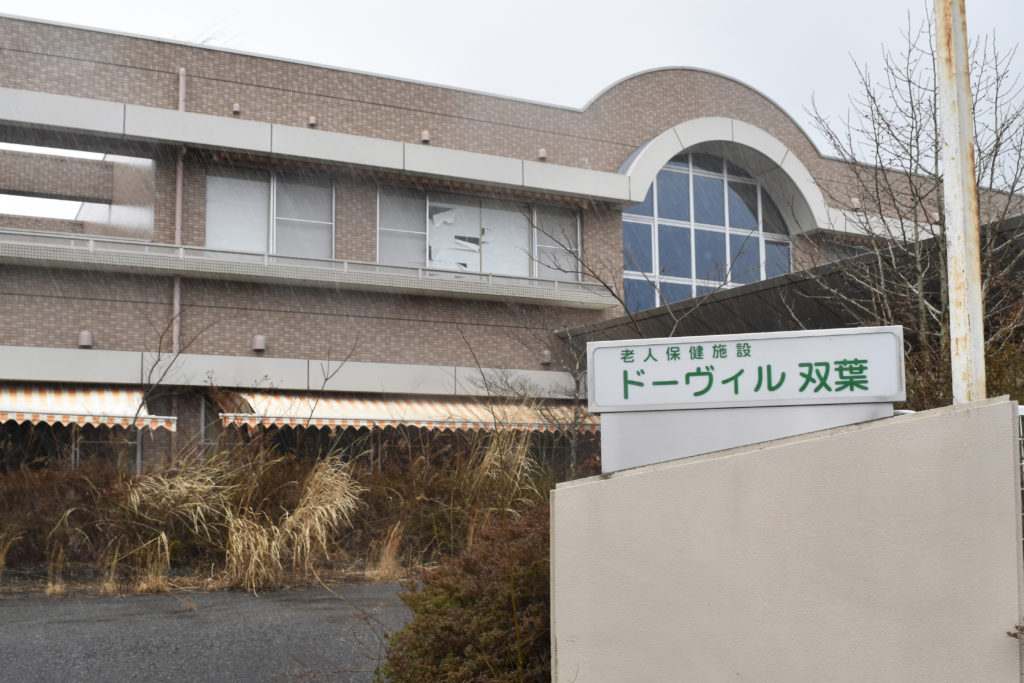 At 3 p.m., a unit from the SDF’s 12th brigade — not the unit Watanabe had requested assistance from — set off for Futaba Hospital from Camp Koriyama in Fukushima Prefecture. The brigade, which is responsible for the defense of Tochigi, Gunma, Nagano, and Niigata prefectures, had been deployed to Koriyama after the earthquake and was waiting on standby.

A little past noon on March 12, the unit had been ordered to evacuate those left behind in medical facilities in the Futaba district, which included Okuma. It is unknown whether this order was related to Watanabe’s request for assistance.

Koriyama is about 80 kilometers west of Futaba Hospital. Although the 12th brigade had three large buses ready to go, it was decided that minibuses would be better suited to traverse the difficult roads, which had been damaged by the earthquake and inundated by landslides. A caravan of six minibuses set off from Koriyama along National Route 288.

Their radios lost signal as they passed through the mountains. When the SDF buses finally could receive communications again, they were greeted with “At 3:36 p.m., there was a hydrogen explosion at Fukushima No. 1’s unit 1.”

The commanding officer was deeply concerned: His unit didn’t have any gear to protect them from radiation.

“I was responsible for the lives of my subordinates. I decided it was best to briefly return to Camp Koriyama, to confirm the situation at the plant and prepare any necessary equipment,” he recalled during a hearing with public prosecutors on Dec. 12, 2012.

The rescue party turned around, arriving back at Camp Koriyama at 9 p.m. that day. 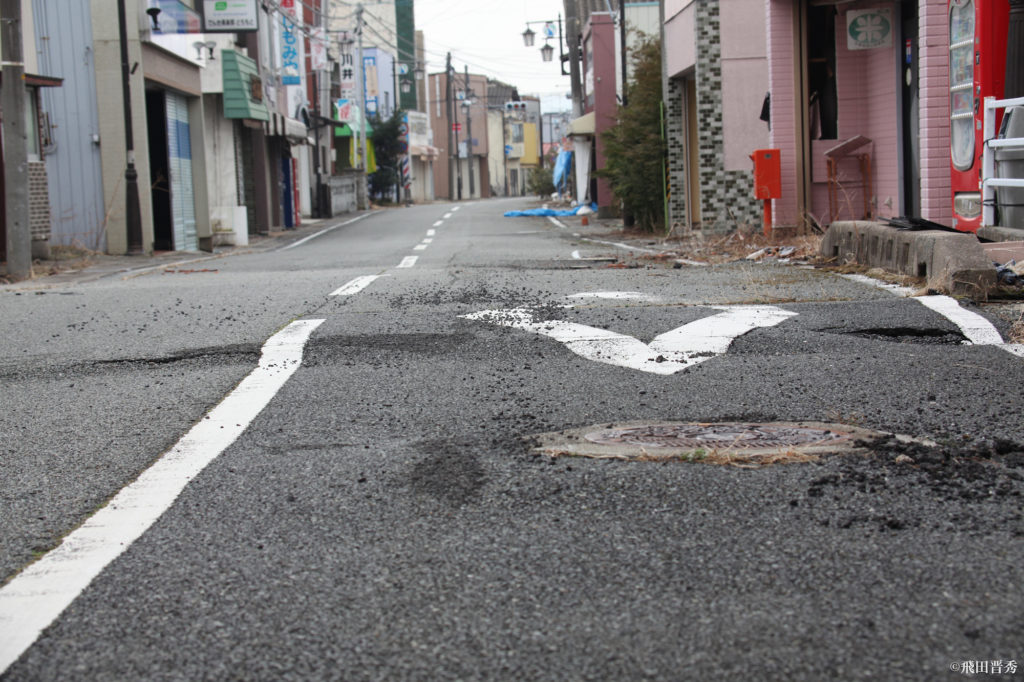 A road in Okuma town bent by the earthquake. Photo taken on March 27, 2014 by Shinshu Hida. (C) Shinshu Hida

By the evening of March 12, hospital director Suzuki was desperate. He had assumed that more buses were on their way after the first five departed with patients and staff at 2 p.m. that day, but none arrived. In addition to Suzuki himself, 129 patients remained at Futaba Hospital; at Deauville Futaba, there were 98 elderly residents, plus the director and office head.

Suzuki went to ask for help from town hall, only a five-minute drive away, but it was completely deserted. He checked again later, thinking maybe someone would have returned, but the result was the same.

The Deauville Futaba director also, at first, assumed more buses were coming to pick up the remaining residents. When staff from town hall had visited the facility that morning, the director himself had told them the number of residents, including how many were bedridden.

Around 7 p.m., the Deauville director and office head drove to the neighboring town of Futaba, which had been ordered to evacuate at the same time as Okuma. Futaba contained a nursing home called Sendan — maybe there was a rescue operation underway that they could link up with.

There was. The SDF had made it to Sendan and were evacuating its residents.

The Deauville director approached an SDF officer dressed in camo and asked that the SDF come to their facilities too.

“Understood. We’ll head there next,” the officer responded.

But upon closer inspection, these soft-top trucks were completely different from the ones used in the Sendan operation. They certainly hadn’t been designed for weak or elderly passengers — the truck beds stood even higher than the director’s head.

The director knew there was no way they could manage to get the bedridden patients onto the truck beds. “It would be a challenge even for those strong enough to walk,” he thought. “And the SDF guys say they’ll take them to Koriyama, but that’s a two-hour trip even in the best conditions. There’s no way the patients would make it.”

A doctor himself, the director abandoned the plan.

He took the SDF officer he was speaking with and an accompanying police officer to Futaba Hospital. Even if they couldn’t help, he still wanted them to have an accurate grasp of the situation at the hospital.

Suzuki was just pulling up as the group arrived at the hospital entrance. He had been to his relatives’ house in Kawauchi, a neighboring village, to pick up more candles.

“These people are on death’s door,” he entreated to the SDF and police. “Please send help as quickly as possible.”

But the SDF officer responded that a rescue operation that night was simply impossible. “We’ll come tomorrow morning.”

They had no choice but to wait. Suzuki and the two Deauville staff spent a sleepless night adjusting IVs and removing patients’ sputum.

But the SDF didn’t come on the morning of March 13.

Suzuki went by car to search for help. He came across members of a fire brigade as he cleared a tunnel on the road to Kawauchi.

“There are still patients at Futaba Hospital,” he told them, relieved at the prospect of help. “Can you please inform the police and SDF?”

Suzuki returned to the hospital to wait, but in vain.

He set off again that afternoon. This time, Suzuki came across a police car. But when he pulled up, a police officer in a hazmat suit yelled: “Do not get out! Stay in your car with the windows closed!”

“The situation at the nuclear plant must getting really bad,” Suzuki thought. Without rolling down his window, he communicated to the police officer that Futaba Hospital needed help.

And yet, nobody came.

It wasn’t until the evening of March 13 that the SDF turned its attention back to Futaba Hospital. The 12th brigade’s command center gave orders to the unit on standby at Koriyama: “Hazmat suits are currently on their way. Once they arrive, go evacuate everyone at Futaba Hospital.”

But the hazmat suit delivery was running late. In the end, the SDF unit set off from Koriyama at midnight on March 14. It had been 27 hours since their return to Koriyama at around 9 p.m. on March 12 following the hydrogen explosion at unit 1.

By the time the sun rose on March 14, three patients at Futaba Hospital had died.

(Originally published in Japanese on March 9, 2021. Translation by Annelise Giseburt.)