“Evacuation complete” with 227 patients left behind during Fukushima disaster (1)

The Fukushima nuclear disaster proved deadly for at least 45 patients at Futaba Hospital and residents of nearby retirement home Deauville Futaba, located just 4.5 kilometers southwest of the Fukushima No. 1 nuclear power plant.

On March 12, 2011, the day after the plant had been crippled by the Tohoku earthquake and tsunami, the prime minister ordered the evacuation of all residents within a 10-kilometer radius of Fukushima No. 1. In theory, the evacuation should have been completed that day. But the last of the hospital patients and retirement home residents only made it out on March 16, five days after the accident began.

Some passed away before help reached them; others, weakened by the wait, passed away at the evacuation point or on the bus ride there.

Charges alleging professional negligence resulting in death was filed against three former executives of the Tokyo Electric Power Company (TEPCO), which owns Fukushima No. 1. If the nuclear accident had never taken place — if the company had been sufficiently prepared for a major natural disaster — no patients would have been left behind. Although the executives were acquitted in the Tokyo district court, the verdict is currently being appealed.

But even amid the race against the clock and the chaos of evacuation, was there no way these 45 lives might have been spared? Even 10 years after the disaster, this is a question few have examined, and no one has been held accountable for what happened. Relatives of the deceased are still searching for answers.

Tansa examined legal records used in a shareholders’ lawsuit (separate from the above) against TEPCO in the Tokyo district court. The records contained transcripts of hearings with those involved in the evacuation of Futaba Hospital and Deauville Futaba, including members of the Self-Defence Forces, police, and hospital staff. We found therein a number of previously unknown details about the mismanaged evacuation, such as fatal errors by Self-Defense Forces leadership.

Using the above records, as well as interviews, documents obtained through freedom of information requests, and records from the government’s Accident Investigation Committee, Tansa investigated why so many were abandoned at Futaba Hospital.

Both the Fukushima No. 1 nuclear power plant and Futaba Hospital and Deauville Futaba lay within the jurisdiction of Okuma town. The hospital is situated 4.5 kilometers southwest of the plant and is a little less than a kilometer removed from the Okuma town center, where town hall was located.

Run by a medical corporation called Hakubunkai, the hospital had both psychiatric and internal medicine departments. It housed a significant number of elderly in-patients, such as those suffering from dementia or experiencing complications due to illness. About 20-30 required constant IV treatment. The psychiatric ward also had a number of long-term patients. All told, 338 individuals were in hospital at the time of the disaster.

Masumi Kowata (66), who ran a cram school in Okuma, had worked at Futaba Hospital as a nursing assistant when she was 33. She recalled a psychiatric ward patient confiding that he wasn’t on speaking terms with his family, who lived in Tokyo.

“‘Nobody’s coming for me,’ he said. Some of the patients had no home to go back to. Futaba Hospital could be a lonely place.”

Hakubunkai also ran Deauville Futaba, which was about 500 meters from the hospital. Its 98 elderly residents required various levels of assistance, and many were bedridden or had been diagnosed with dementia.

When the magnitude 9 earthquake struck at 2:46 p.m. on March 11, 2011, Masakatsu Kanno (76), who ran a butcher’s shop on Okuma’s main street, rushed to Futaba Hospital as soon as the shaking subsided. His father, Shinzo, then 99, had been hospitalized since coming down with pneumonia six months earlier. It only took Kanno five minutes to drive to the hospital. He asked the woman at reception if his father was ok.

“We moved him to a safe location, so he’s fine,” she replied.

The receptionist hadn’t actually checked on Kanno’s father. Perhaps, in the confusion right after the quake, she had wanted to quickly reassure the worried son. Kanno returned home, breathing a sigh of relief. It was then 3:15 p.m. — the last time for a month that he would know his father’s whereabouts. 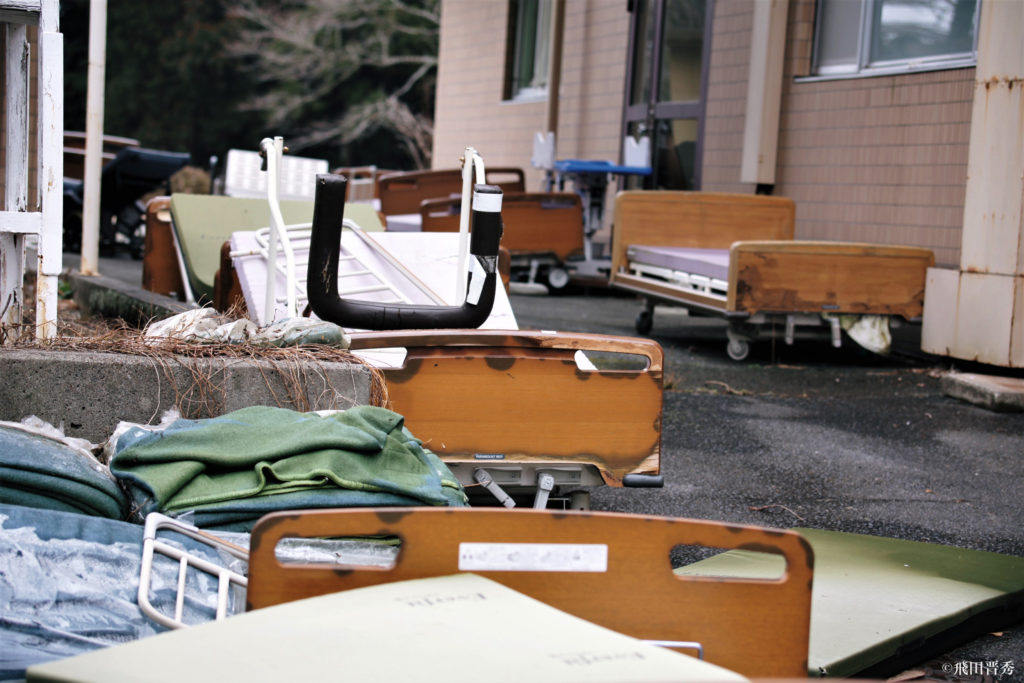 Despite the receptionist’s assurances, Futaba Hospital and Deauville Futaba found themselves, increasingly, in trouble.

Some patients and staff had screamed as the earthquake, the largest in living memory, shook the facilities. Others, too scared to speak, held their nurses’ hands in a vice grip. Every lifeline was severed: electricity, running water, gas, phone lines. Backup generators provided no more than a few hours of power.

Burst pipes flooded swathes of the facilities, in some areas deep enough to require waterproof boots to cross. Nurses guided patients out of the flooded rooms.

But the biggest problem was the blackout. Without power, staff couldn’t use medical devices like aspirators or infusion pumps, both of which were essential for the bedridden patients. 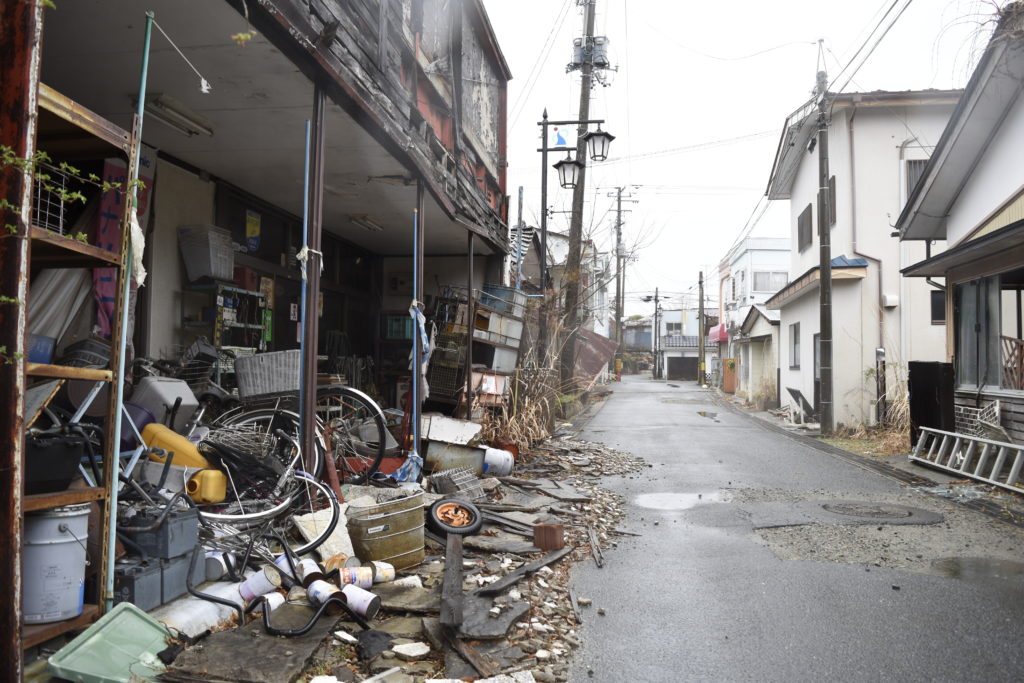 It was all hands on deck: Hospital Director Ichiro Suzuki helped care for patients as well. By flashlight and candlelight, the hospital staff checked on patients and adjusted their IVs. In place of aspirators, syringes were used to draw out patients’ sputum.

As Suzuki and his staff cared for their charges, people in Okuma were growing increasingly uneasy about the nearby nuclear plant.

Kowata saw a number of men wearing Fukushima No. 1 plant worker uniforms pop in and out of a convenience store near town hall. The cash register didn’t work because of the power outage, but the men carried off their goods without waiting for a staff member to ring them up using a calculator. Kowata spotted a worker who had once attended her cram school. She called out to him, asking what was going on.

“You should get out!” he yelled back. “It’s over for Okuma.”

Kanno, whose father was at Futaba Hospital, was visited at home that night by his son-in-law, who worked at Fukushima No. 1.

The cooling functions of Fukushima No. 1’s reactors had been knocked offline by the earthquake and tsunami. Pressure was rising within the reactors, and venting the pent-up steam was necessary to prevent them from exploding.

“Radiation will be released when we do,” he explained.

Both an explosion and venting would release radioactive materials, but venting was the lesser of two evils. At least the reactors would be intact.

The Okuma townspeople’s unease proved well-founded. Beginning the night of March 11, the Japanese government issued successive evacuation orders for an expanding radius around Fukushima No. 1. The next day, at 5:44 a.m., the evacuation zone was extended to 10 kilometers from the damaged plant — an area that included Futaba Hospital and Deauville Futaba. Okuma Mayor Toshitsuna Watanabe received the order via a phone call from Special Advisor to the Prime Minister Goshi Hosono.

“It could be a difficult, even life-threatening journey for the bedridden patients,” he thought. “But if we stay here and the situation at the plant worsens, the hospital might not be able to receive food and other supplies.”

He decided to evacuate everyone.

Suzuki knew city officials were preparing buses to help residents evacuate. Ambulances would be better, but any port in a storm — the buses would have to do. Even the patients requiring IVs could go without them for at least 12 hours. Suzuki quickly dispatched staff to Okuma town hall to make sure the buses made it to the hospital.

But despite repeated trips by staff to negotiate, no buses came throughout the morning of March 12. The hospital was told to wait and that it would be provided with buses after the other residents had been evacuated.

At last, around noon, five buses pulled up at the hospital. Suzuki checked each ward for patients as nurses and other staff helped them onto the buses.

The buses were at capacity with 209 people onboard, including all the nurses and hospital staff, who went along to take care of patients on the journey. They departed the hospital at 2 p.m.

Still remaining were 129 patients in Futaba Hospital and 98 residents of Deauville Futaba; 227 in total. Suzuki, assuming town hall was sending more buses their way, stayed behind, as did the Deauville Futaba director and office head.

But no more buses came.

Mayor Watanabe believed that everyone from Futaba Hospital and Deauville Futaba had been evacuated. With Suzuki and 227 patients still waiting for help, Watanabe set off for the evacuation point, Tamura city. 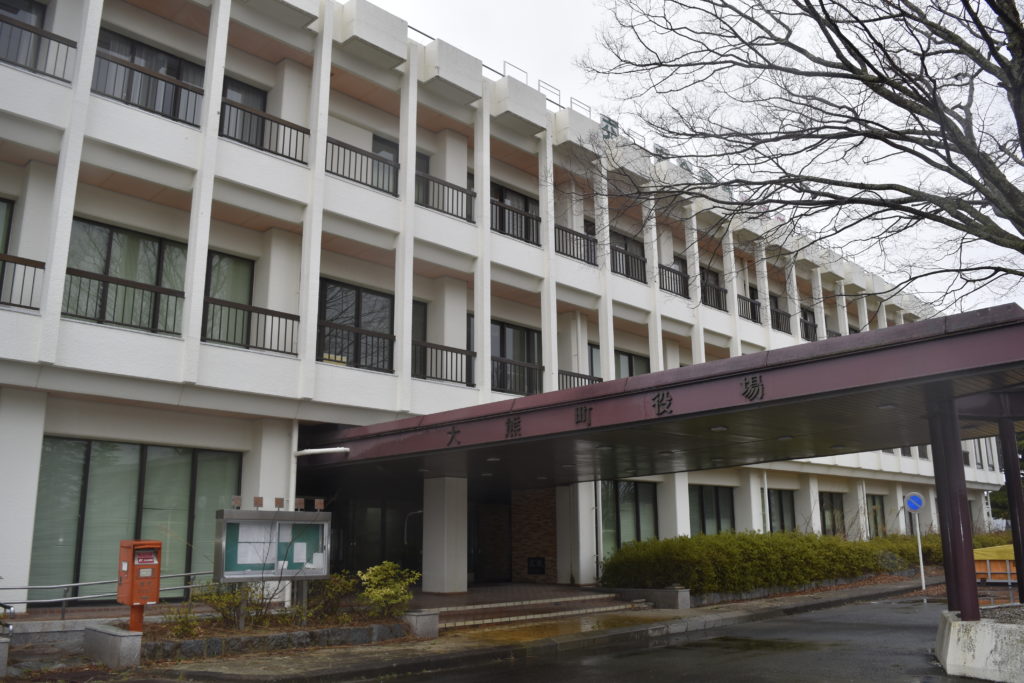 What had caused Watanabe’s misunderstanding? On May 15, 2012, he testified as follows for the government’s investigation into the disaster.

“I asked the Self-Defense Forces (SDF) to send trucks to Futaba Hospital, and I confirmed that they were on their way. I assumed that the SDF would communicate with the hospital staff and take necessary measures.”

But the SDF were not involved in the hospital evacuation on March 12, nor were they under obligation to follow Watanabe’s instructions. Watanabe considered the evacuation complete without confirming that the SDF had arrived and rescued the remaining patients. Tansa interviewed Watanabe, who has since retired and now lives in Okuma.

Why hadn’t he confirmed that the Futaba Hospital evacuation was complete?

“It’s true that I made a mistake in not properly confirming that everyone got out. But Okuma had a population of 10,000. Realistically speaking, we got the evacuation order that morning and did the best we could, but it was impossible to check on absolutely everyone. If evacuation was that easy, no one would have had any difficulty.”

We asked what specific instructions Watanabe had given the SDF when he asked them to evacuate Futaba Hospital.

“It’s not like we could tell them ‘Go here, do this.’ The SDF had their own organizational structure and line of command that they operated under. And they didn’t contact us, so we couldn’t check how things went.”

Had there been no word about Futaba Hospital while Watanabe was in Tamura city?

“No, none at all. I learned about the situation there later, from the news.”

Watanabe hadn’t given the SDF specific instructions because they had their own line of command. Although he had asked them to go to Futaba Hospital, there had been no follow-up from either side.

As hours turned into days and over 200 patients waited for rescue, this lack of communication between government officials and the SDF would continue to impede the evacuation.

(Originally published in Japanese on March 8, 2021. Translation by Annelise Giseburt.)

Next article
Abandoned at Futaba Hospital: All articles