What would you do if someone important to you was sterilized, without them ever knowing about it?

Our investigation found that the Japanese government not only violated individuals’ human rights by sterilizing them without their consent, but that some prefectural review boards collected victims’ criminal and health records under directions from the health and labor ministry. The ministry wanted to determine whether the victims’ so-called disabilities were hereditary.

Article 1 of Japan’s Eugenic Protection Law stated that its purpose was to “prevent the birth of defective descendants,” as it applied to people with hereditary genetic disorders or disabilities such as schizophrenia, learning disabilities, manic depression, epilepsy, and hemophilia. Sterilization surgeries were conducted regardless of whether or not the concerned individuals gave their consent, as long as the relevant eugenic protection prefectural review board gave the green light.

According to article 4 of the law, doctors were required to report to the review board when they found a person with hereditary genetic disorders or disabilities. They were also allowed to use anesthesia, physical restraints, or deception on non-compliant individuals, as instructed by a notice sent to local governments by the health ministry on October 24, 1949.

Note: Documents we obtained include discriminatory expressions. In order to illustrate the situation fairly and accurately, we refrained from editing or censoring them.

One year after the Eugenic Protection Law came into effect on January 20, 1949, Health and Labor Minister Joji Hayashi ordered doctors to submit detailed information about patients’ family members. Unlike ministry notices, the order was legally binding.

The order mandated doctors’ reports to include, to the extent they were known, the names and ages of relatives who suffered from hereditary diseases — as well as those who had a criminal record, suffered from alcohol abuse, had committed suicide, or were missing — along with their relationship to the patient set to be sterilized.

Doctors submitted their reports containing criminal and medical records of subjects’ relatives to prefectural review boards, which made decisions on forced sterilization.

Kanagawa Prefecture archived the family trees of individuals subjected to sterilization reviews in 1970.

For example, when, on October 20, 1970, a doctor in Kawasaki City submitted a report to the prefectural review board on a woman he had diagnosed with a mental disability, he also submitted her family tree.

The report traced back two generations and included medical records of her siblings and other relatives. It noted that the woman’s sister had developed hearing loss, and that relatives had died from a variety of conditions, including inflated peritoneum, stomach cancer, and a disease of the spinal cord. Family members in good health were also included in the family tree.

In 1970, the review board examined 10 cases, including the above. Nine of the case files included family trees created by doctors. The one exception was a woman from Yokohama City deemed to have a mental disability; her case file indicated that she had no living relatives. 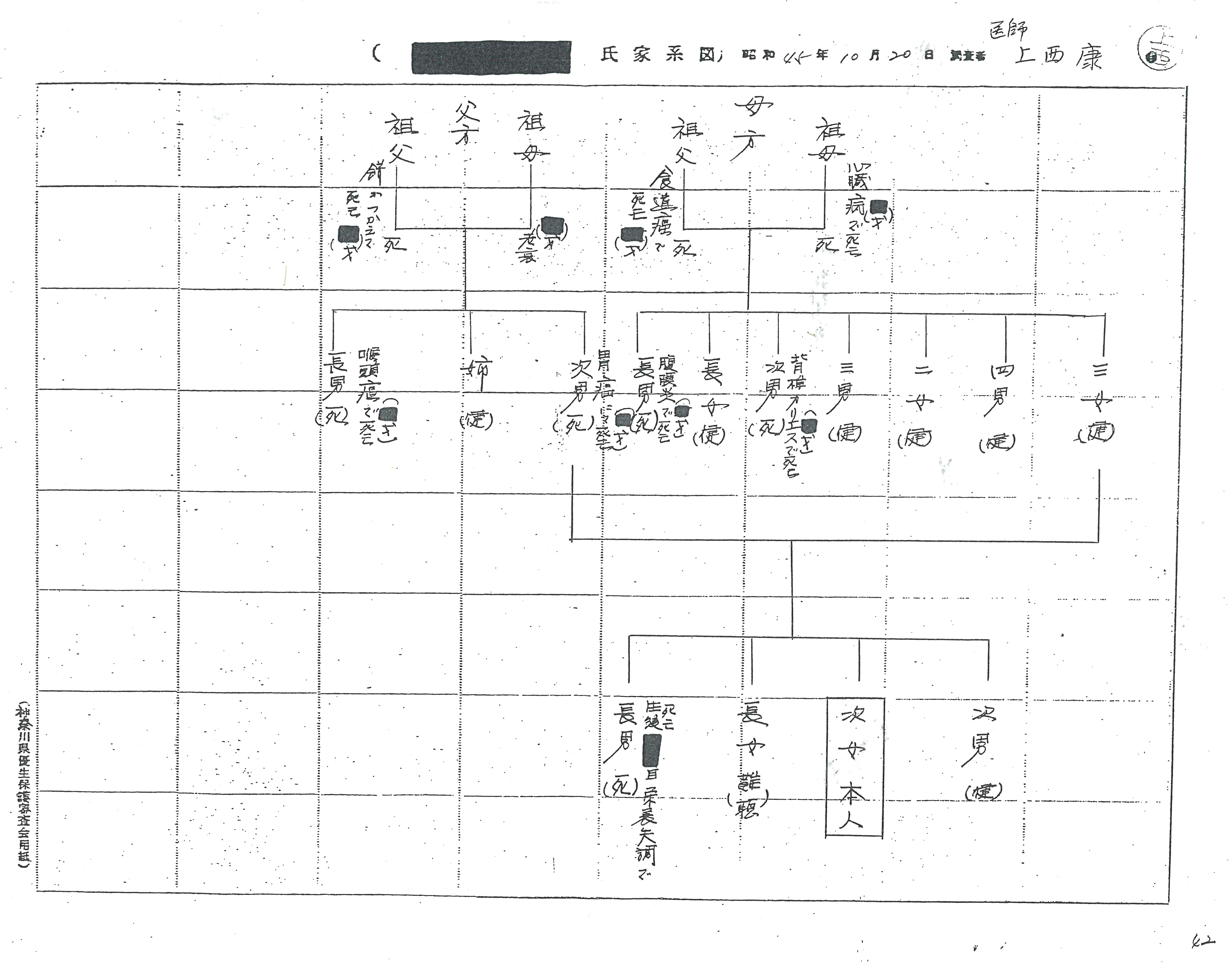 “Cousin is a repeat offender”

Fukuoka Prefecture asked doctors slated to conduct the sterilization surgeries to create and submit family trees to the review board.

On Aug. 8, 1980, a doctor working in a Fukuoka prefectural hospital reported the case of 39-year-old woman diagnosed with a mental disability. According to a document filed by the doctor, she had working for a food company but was hospitalized because her condition no longer allowed her to make sound judgments.

The family tree created by the doctor noted: “Her younger sister suffers from the same level of mental retardation. She was admitted to a mental hospital for a long period and still sees a doctor.”

The doctor concluded that “the subject and her sister both suffer from mental retardation, which is suspected to be hereditary even though the root cause is unknown. A cousin on her father’s side is also a repeat offender and is strongly suspected of suffering from the same condition.”

The woman was sterilized.

Fukushima Prefecture investigated families with histories of substance abuse, as well as those with radiation damage. The prefecture has a record of review board documents from 1962, as well as from 1970 to 1979. In 1970, doctors were ordered to submit subjects’ family medical history and other information based on Article 4 of the Eugenic Protection Law.

Doctors were told to record the following: educational background, occupation, medial history on both maternal and paternal sides, substance abuse and radiation damage in parents, disabilities beginning in the womb, difficult birth, disabilities sustained in infancy such as serious measles, fever, cerebral meningitis, and brain injury.

We confirmed that Gunma and Saitama prefectures collected similar information but were unable to obtain details as the documents were redacted. 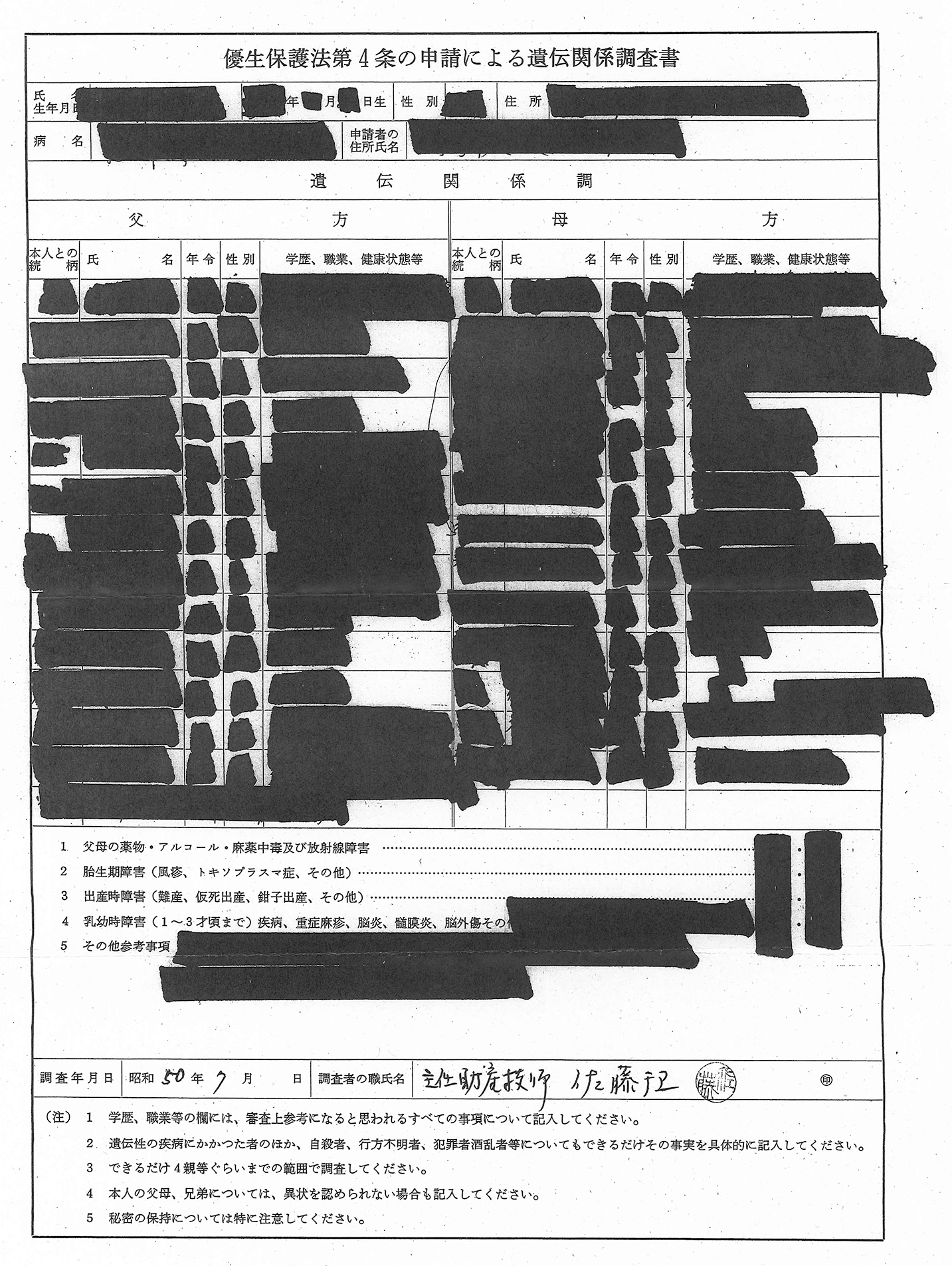