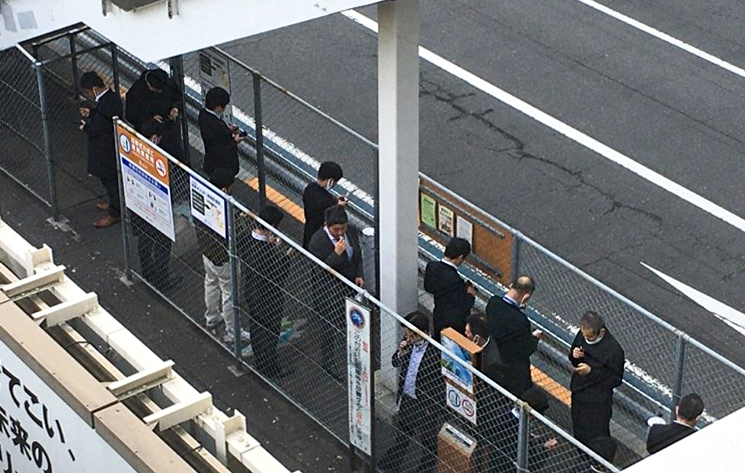 Japan is IQOS’ biggest market. Following the product’s introduction, for a time Japan represented over 90% of global IQOS sales.

By Jan. 23, 2021, global deaths from Covid-19 had exceeded 2 million. Evidence suggests that smoking is associated with increased rates of severe Covid and risk of death.

As the virus spread in Japan, Philip Morris ran ads in newspapers across the country with copy such as “Spend your time at home with smoke-free IQOS.” Such wording could lead people to think that IQOS is less dangerous than cigarettes.

Why has IQOS done so well in Japan?

The answer lies in who’s making Japan’s tobacco regulations: Rather than the health ministry, it’s the Ministry of Finance that holds the real power. And it appears the ministry prioritizes tax revenue from heated tobacco products over citizens’ health.

The Ministry of Finance doesn’t mess much with tobacco regulations, including those for advertising — a lenient stance compared with some countries. Mexico, for instance, bans both the sale and import of heated tobacco products.

Japan’s municipalities follow the national government’s lead. In addition to not investigating the health effects of heated tobacco products, some even allowed Philip Morris to bankroll the construction of heated tobacco-only smoking areas.

Certificate of appreciation from Osaka governor to Philip Morris

On a December day just past noon, a heated tobacco-only smoking area near Tokyo’s Osaki Station was crowded with office workers. Although their devices represented a range of the products on the Japanese market, IQOS was the most common. 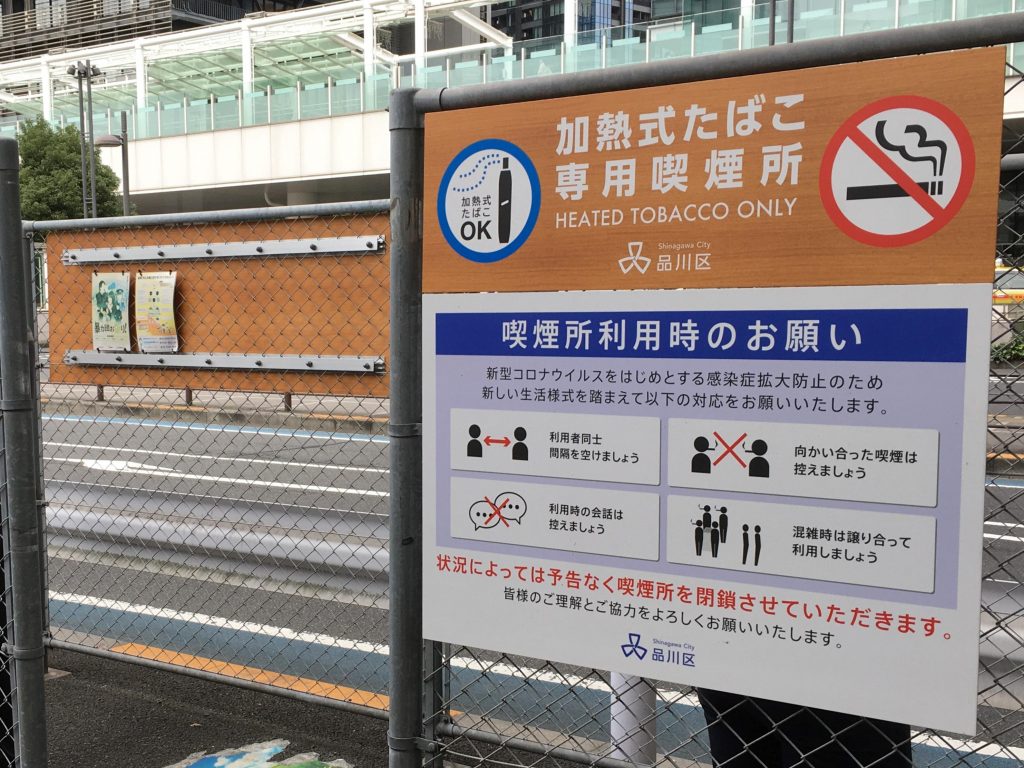 With phone in one hand and IQOS in the other, office worker Masahiro Kanazawa (36) said he used to smoke a pack of cigarettes a day before he quit five years ago. “If it’s heated tobacco, maybe it’s not so bad for you,” said Kanazawa, who had picked up IQOS in the past six months.

“We began working on this project with Philip Morris from around April 2020,” Mayuzumi said. “I can’t mention any numbers, but I will say that the city didn’t pay for a thing: not for construction, not for the panels and ashtrays, not for the design, not for the trick art. We’re very grateful.” 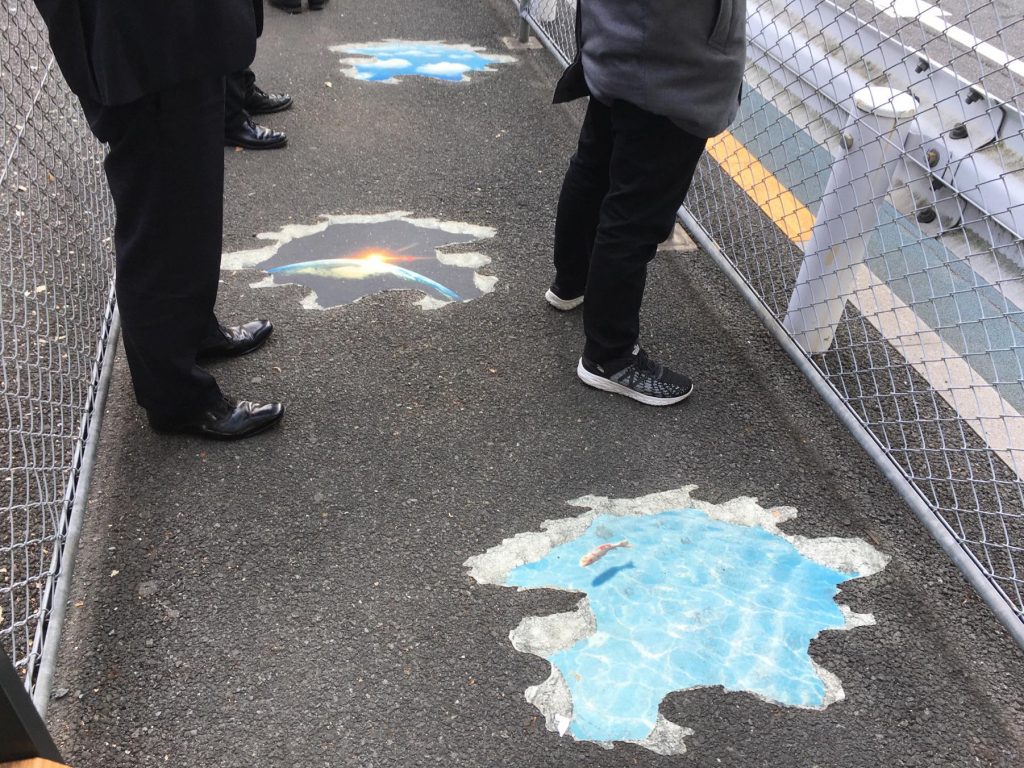 Was Mayuzumi aware that, based on Philip Morris’ promotional language, some IQOS users believe that the product represents less of a health risk than cigarettes?

“I don’t know the science of it, so I’ll leave that sort of thing to the health promotion department. But it’s a fact that complaints about tobacco smoke or the smell have gone down. From a government standpoint, that gives heated tobacco a leg up over cigarettes. I’m open to further collaboration with Philip Morris or Japan Tobacco,” he said.

Had Osaka Prefecture presented the certificate with full knowledge of the health risks of heated tobacco?

“The prefecture presents all donors above a certain amount with certificates of appreciation,” she explained. “I’m not at liberty to share the cost of the smoking area, but it did fall into that tier.

“Japan Tobacco was another candidate, but Philip Morris proposed a smoking area that separates heated tobacco from cigarettes. It was an interesting idea, so we went with that one.” 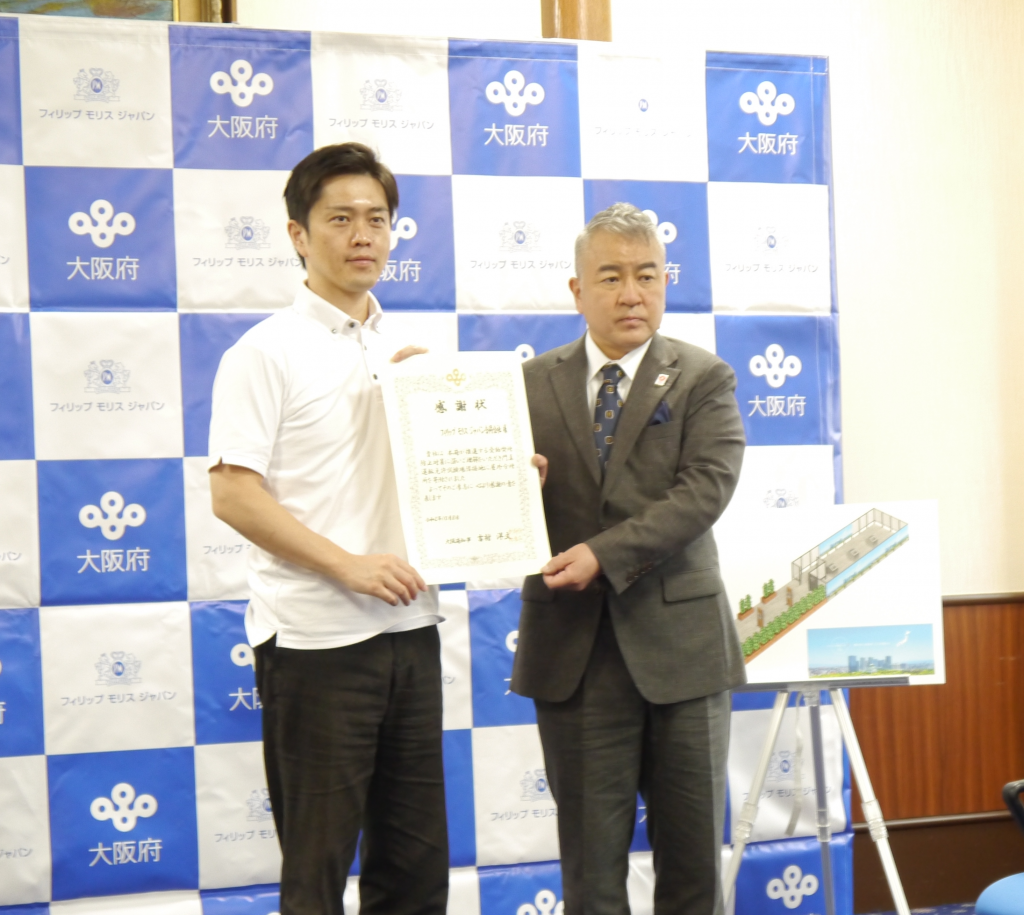 Amid this environment, medical professionals are raising their concerns about heated tobacco products.

On Sept. 30, 2019, the Japan Society for Tobacco Control Chairman Manabu Sakuta sent the heads of the Ministry of Health, Labour and Welfare’s Health Service Bureau and the Ministry of Finance’s Tobacco and Salt Industries Office an emergency warning citing evidence that suggests heated tobacco products can cause severe or even fatal damage to the lungs.

The September 2019 emergency warning reported cases of severe illness and death following use of heated tobacco products that had occured in various countries — including two males, 16 and 20, in Japan who had developed acute pneumonia after smoking IQOS. During the Covid-19 pandemic, the Japan Society for Tobacco Control has continued to sound the alarm regarding heated tobacco products, citing opinions by the WHO and other experts to counter marketing that paints IQOS as a reduced risk tobacco product.

In theory, all tobacco advertising — including for heated tobacco products — is banned by an international treaty, the Framework Convention on Tobacco Control (FCTC). Japan, which ratified the treaty in 2004, is among its 182 state parties.

But the FCTC cedes authority to member states’ “constitutions,” and Japan takes full advantage of being able to operate under its own rules.

In Japan, the Ministry of Finance not only sets the rules governing tobacco advertising and sales, it also determines the rate at which tobacco products are taxed. Although the Ministry of Health, Labour and Welfare is tasked with addressing tobacco’s health effects, it has no power to implement regulations.

The Ministry of Finance is reluctant to restrict ads for heated tobacco products due to Japan’s decline in cigarette smokers. Cigarette sales have traditionally generated roughly an annual 2 trillion yen (about $19.3 billion) in tax revenue, and heated tobacco is a way to keep those numbers steady.

The Ministry of Finance has incrementally raised the tax rate of heated tobacco products since their introduction to the Japanese market in 2014. In fiscal year 2018, they generated roughly 120 billion yen (about $1.2 billion) in tax revenue.

“Tobacco is a source of public finance,” said a representative from the Ministry of Finance’s Tobacco and Salt Industries Office. “It’s the ministry’s legal right to manage its sale. Understanding the health risks [of heated tobacco products] will take 10 to 20 years of epidemiological surveys. We will continue to entrust the Ministry of Health, Labour and Welfare with assessing tobacco products’ safety.”

Tax revenue from tobacco, consistent at around 2 trillion yen. From the Ministry of Finance’s website.

The Ministry of Finance leaves the creation of tobacco advertising standards to the Tobacco Institute of Japan. Although the standards are based on guidelines set by the finance minister, the guidelines merely state that “[advertising will be] conducted in accordance with voluntary standards set by an industry organization.” In other words, the Ministry of Finance gives free reign to the Tobacco Institute.

The Tobacco Institute’s standards allow tobacco companies to run ads in newspapers, provided they meet certain requirements such as size and number. Newspaper ads for IQOS, such as the one trumpeting that 230,000 people had already rented a device, are in the clear as far as these standards are concerned. Expressions that could give users a mistaken impression about IQOS’ health effects are similarly unregulated.

Among the Tobacco Institute’s seven officers, three are members of Philip Morris Japan’s management, including President Shea Lih Goh and Vice President Satoshi Inoue, the latter of whom was the one to accept the certificate of appreciation from Osaka Governor Yoshimura. The other four officers are also tobacco company executives or former employees.

As to whether industry-created standards might go easy on big tobacco, Yusuke Suzuki of the Tobacco Institute’s heated tobacco planning office replied that “the institute’s standards are in line with Japanese laws, so there’s no issue.”

After noting that Philip Morris’ ads too “adhere to Japanese laws and regulations,” Suzuki added that “the Tobacco Institute of Japan proposed its voluntary standards to the Ministry of Finance’s tobacco subcommittee and received approval following deliberation at a committee meeting on Dec. 28, 2018.”

(Originally published in Japanese on Dec. 26, 2020. Translation by Annelise Giseburt.)