The Cirebon coal-fired power plant — located in Cirebon, West Java, Indonesia — was built as a joint project of Japanese and South Korean trading and electric power companies and financial institutions. However, as we revealed in this series’ previous article, the plant isn’t equipped with the kind of anti-pollution technology that would be required in its investors’ home countries. Unit 1 began operations in 2012, unit 2 is under construction, and unit 3 is in the planning stage.

Why would Japan and South Korea build power plants in Southeast Asia that wouldn’t clear pollution standards at home? The answer isn’t hard to guess: Enabled by lenient environmental standards, it’s simply cheaper. But perhaps a deeper question is: Why do they think such a double standard is acceptable?

In fact, one of Cirebon’s South Korean investors recently announced its intentions to pull out of phase three of the project. But what about Japan? 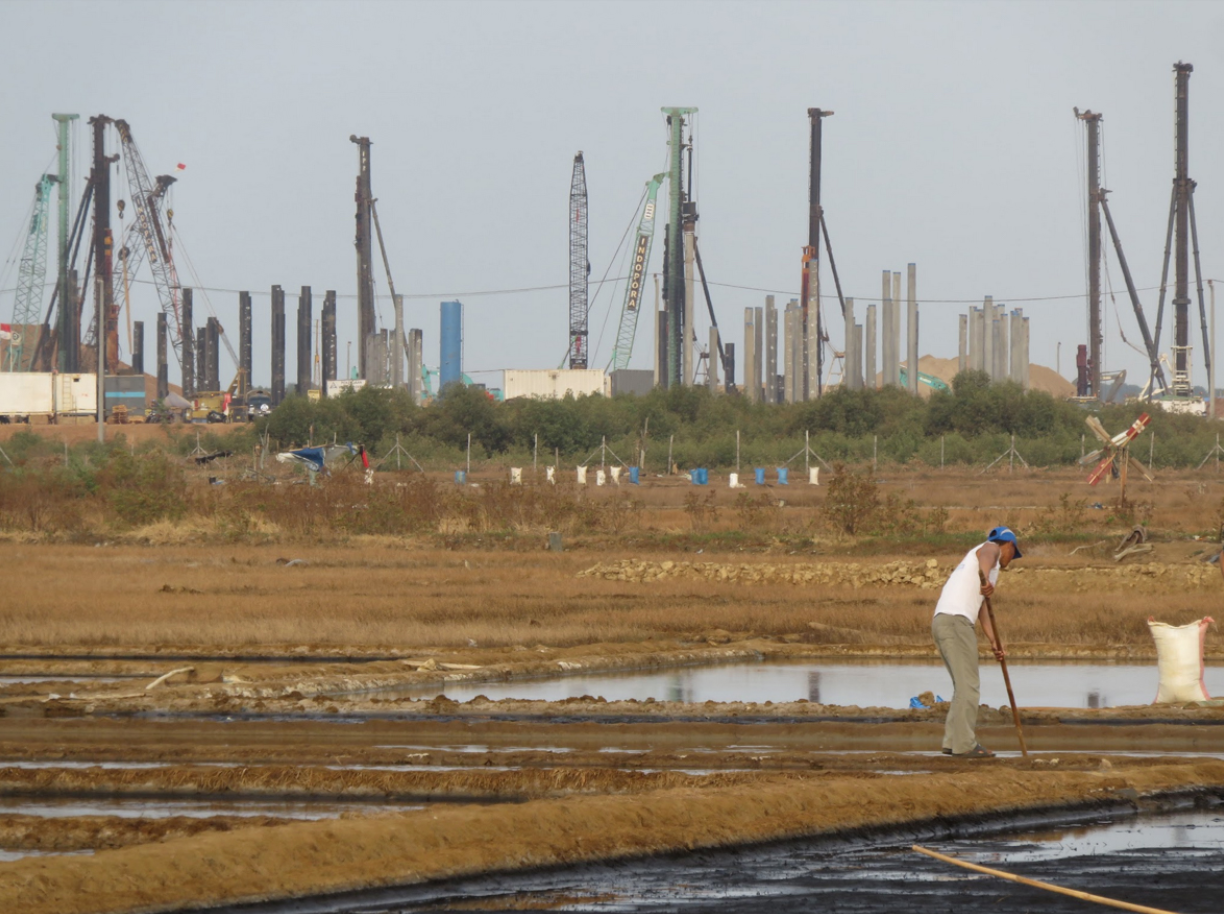 Cirebon 2 is currently under construction. Photo taken in September 2018, courtesy of FoE Japan.

About the Cirebon power plant

Cirebon 1 cost 96 billion yen (about $848 million at the time of this article’s original publication). Cirebon 2 will cost an estimated 226 billion yen (about $1.9 billion), and the third unit is likely to be as expensive. The plant is operated by local company Cirebon Electric Power; its biggest investor is Japanese trading giant Marubeni Corporation. Other financers include the Japan Bank for International Cooperation (JBIC) and a South Korean bank. In 2007, Japanese then Prime Minister Shinzo Abe attended the plant’s signing ceremony together with Indonesian then President Susilo Bambang Yudhoyono.

On Oct. 18, 2018, the South Korean National Assembly’s Trade, Industry, Energy, SMEs, and Startups Committee held a full-day session to examine whether the country’s budget was being used appropriately in the areas the committee oversaw. Last on the agenda was the Cirebon plant, and Korea Midland Power Co. (KOMIPO) President Park Hyung-gu took the floor to answer legislators’ questions. KOMIPO has a 20% investment ratio in Cirebon Power.

Siting across a table from Park was Assemblywoman Cho Bae-sook, a member of the committee. Before her election to the National Assembly, Cho served as a prosecutor and a judge. Their discussion went as follows.

Cho: “Does Cirebon 1 have systems to remove sulphur oxides (SOx) and nitrogen oxides (NOx) from the plant’s flue gas?”

In addition to the greenhouse gas CO2, SOx and NOx are the two main types of pollutants emitted through burning coal. However, emission control systems can help remove them from the gas discharged by the plant.

Park: “No, the plant is not equipped with them.”

Cho: “What about plants in South Korea? Are KOMIPO and other companies’ plants equipped with these [SOx and NOx removal] systems?”

Cho: “It’s a matter of course for coal-fired power plants to have SOx and NOx removal systems. During the Park Chung-hee administration [1962–1979], plants built in the Onsan region by Japanese chemical companies lacked that kind of system, causing harm to roughly 2,000 residents. Most had to relocate. Now we’re doing the same thing [to Indonesia].”

Cho went on to ask about Cirebon 2, which is currently under construction: “It’s SOx and NOx emission standards are over 10 times that of KOMIPO’s Boryeong power station units 7 and 8. No matter the differences between South Korea and Indonesia’s environmental standards, isn’t this excessive?”

She also made it clear that renewable energy is expected to be cheaper than coal in South Korea by 2030.

“Is it right to invest based only on immediate profit? Will KOMIPO also invest in Cirebon 3?” Cho pressed.

Park replied: “It’s as you say. Our work on Cirebon 3 has been suspended. We plan to focus on renewables.” 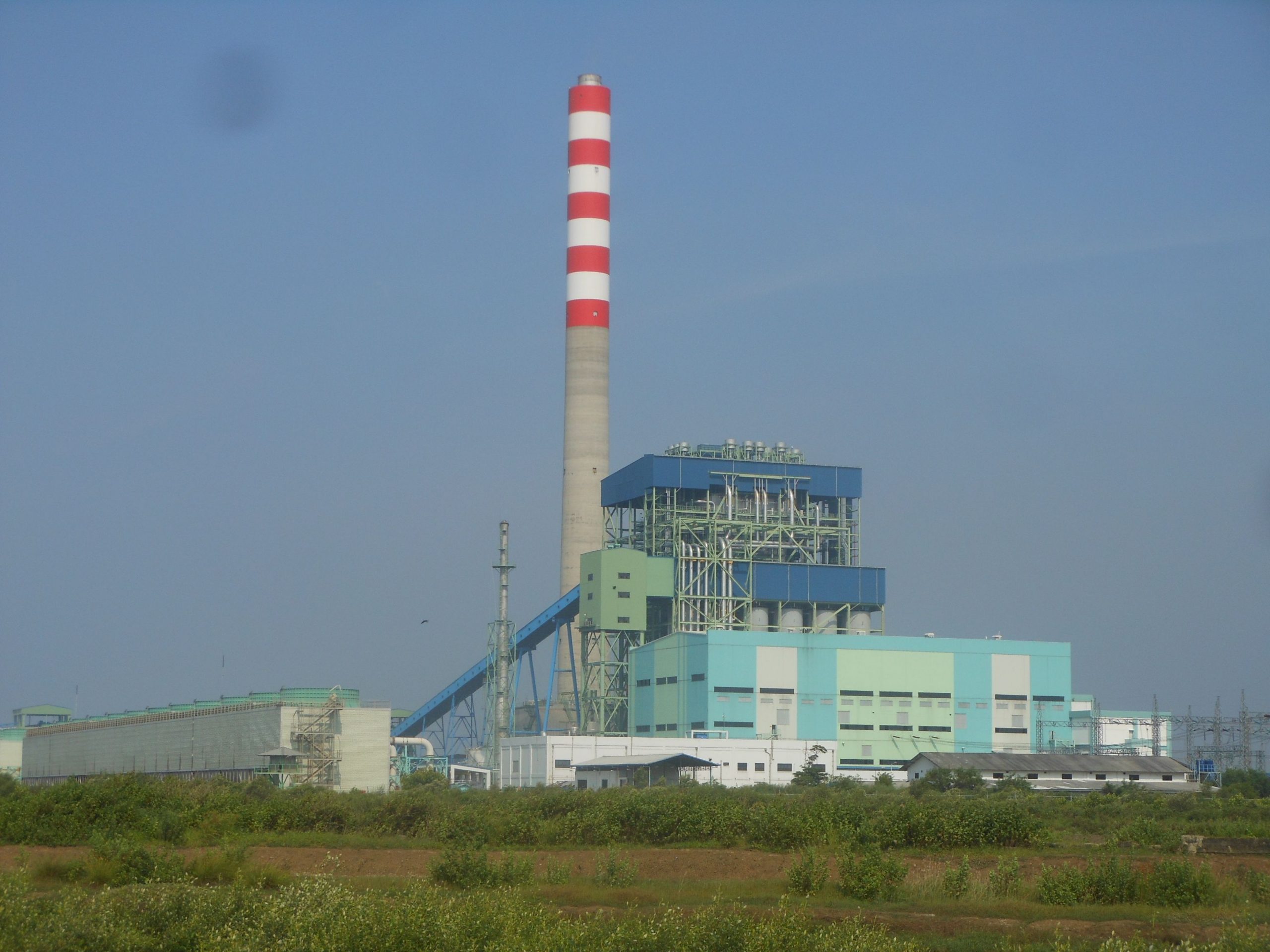 Business as usual for Marubeni

It planned to cut the “coal-fired power net generation capacity [of its portfolio] in half” by 2030, and, as a general rule, not “enter into any new coal-fired power generation business.” The corporation also promised to “deploy innovative technologies to increase the efficiency of its portfolio assets, and proactively promote the reduction of its environmental impact.”

Sarjum (39), a resident of the same Kanci Kulon village that also houses the Cirebon plant, heard about Marubeni’s announcement in a message from environmental NGO Friends of the Earth (FoE) Japan. Although he had worked as a fisherman in the past, Sarjum’s catch had disappeared following the construction of Cirebon 1, and he had found new employment as a welder at an auto shop.

Marubeni is the largest investor in Cirebon Power. “Maybe they’ll pull out of the project,” Sarjum thought hopefully.

On Oct. 15, he met with Moh Aan Anwarudin (33), leader of local anti-power plant group The People for Environmental Protection (RAPEL). They decided to send a letter to Marubeni then President Fumiya Kokubu. A member of the Indonesian environmental NGO WALHI, which is also involved in protesting the plant, translated their appeal into English.

“We would like to simply reiterate our requests to your company that unit 1 is shut down at the soonest moment, and that the construction of unit 2 is terminated immediately,” their letter read. “In addition, unit 3 must not be pushed through any more.”

Sarjum and Anwarudin hoped that, if Marubeni was going to halve its coal-fired power net generation capacity, the Cirebon plant could be included in that 50% reduction.

But, as of Nov. 26, 2018 (a day before this article’s original publication), they had received no response.

After hearing about the letter, Tansa decided to follow up with the trading giant. On Oct. 31, we sent a list of questions to Marubeni. A response came on Nov. 9.

Regarding the currently operating unit 1, a spokesperson wrote: “It is our major principle to fully carry out all our duties until the end of the contract period. […] We believe it is possible to halve our portfolio’s coal-fired power generation capacity by 2030 while still retaining Cirebon 1 until the completion of its power purchase agreement.”

As for unit 2, currently under construction: “It is our intention to continue this project, alongside further communication with our partners and related parties, to provide a stable source of electricity and contribute to economic growth through properly fulfilling all our contractual obligations.”

One of said partners, KOMIPO, had announced its intention not to finance the planned unit 3. Would Marubeni take the same course?

The spokesperson: “Unit 3 is not included in our capacity reduction plan. We will proceed with the project in line with our planned initiatives. We have not received an explanation directly from KOMIPO about whether it will withdraw from the project.”

In short, Marubeni had no intention of changing its involvement in or plans for Cirebon Power. The plant had not been included in its so-called big policy shift. 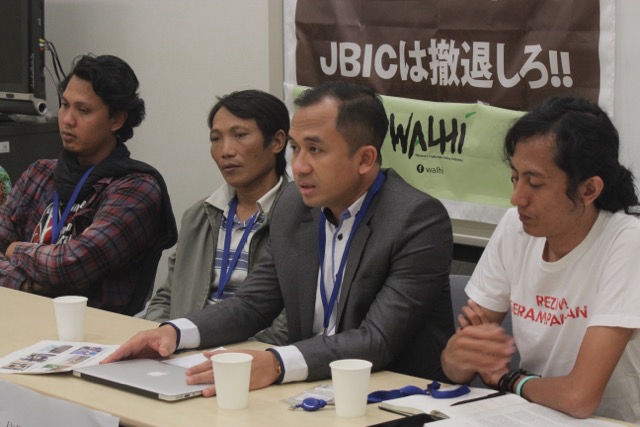 Sarujum (second from the left), a lawyer (third from the left), and others from Indonesia urge JBIC and Marubeni to withdraw from Cirebon at a press conference held at the House of Councilors members’ office building on May 24, 2017. Photo courtesy of FoE Japan.

Sarjum was incensed when we told him about Marubeni’s response to our questions.

“Their coal policy is totally contradictory if they continue the Cirebon project,” he said.

Sarjum stressed that the plant is a danger not only to the environment but to residents’ livelihoods.

Most villagers in the area surrounding the plant had made a living from coastal fishing or salt farming. Shrimp and geoduck clams had previously thrived in the coastal waters, and sometimes the fishers had even caught rays. But residents say that the fish and shellfish disappeared following the construction of Cirebon 1. And the salt farmers found their pale crop flecked with brown and black.

“The quality of the salt fell, and the brokers wouldn’t buy it anymore,” said a Cirebon resident named Dusmad. “I had to look for different work.”

Sarjum has a similar story. He remembers that people used to throng the village beaches. Everyone, from children to the elderly, filled their buckets with shellfish. “It was like no matter how many you gathered, there’d still be more.”

As a fisherman, Sarjum caught between 25 and 50 kilograms of fish per day. It was more than enough to support his three children.

But after the power plant was built, Sarjum was lucky to even catch a kilo. Some days, he took home nothing.

“I think land reclamation and water discharged from the plant is what made the fish and shellfish disappear,” he said.

Although he found work as a welder at an auto shop, Sarjum is just barely getting by. In the past, even if money was tight, at least his family could feast on fish. That safety net has now disappeared.

“There must be some way to close the plant,” he said.

With the help of FoE Japan and WALHI, in May 2017 Sarjum was part of a group that came to Japan to appeal for the closure of Cirebon Power directly to Marubeni and JBIC.

But it seems Japan’s institutions have no intention of listening. 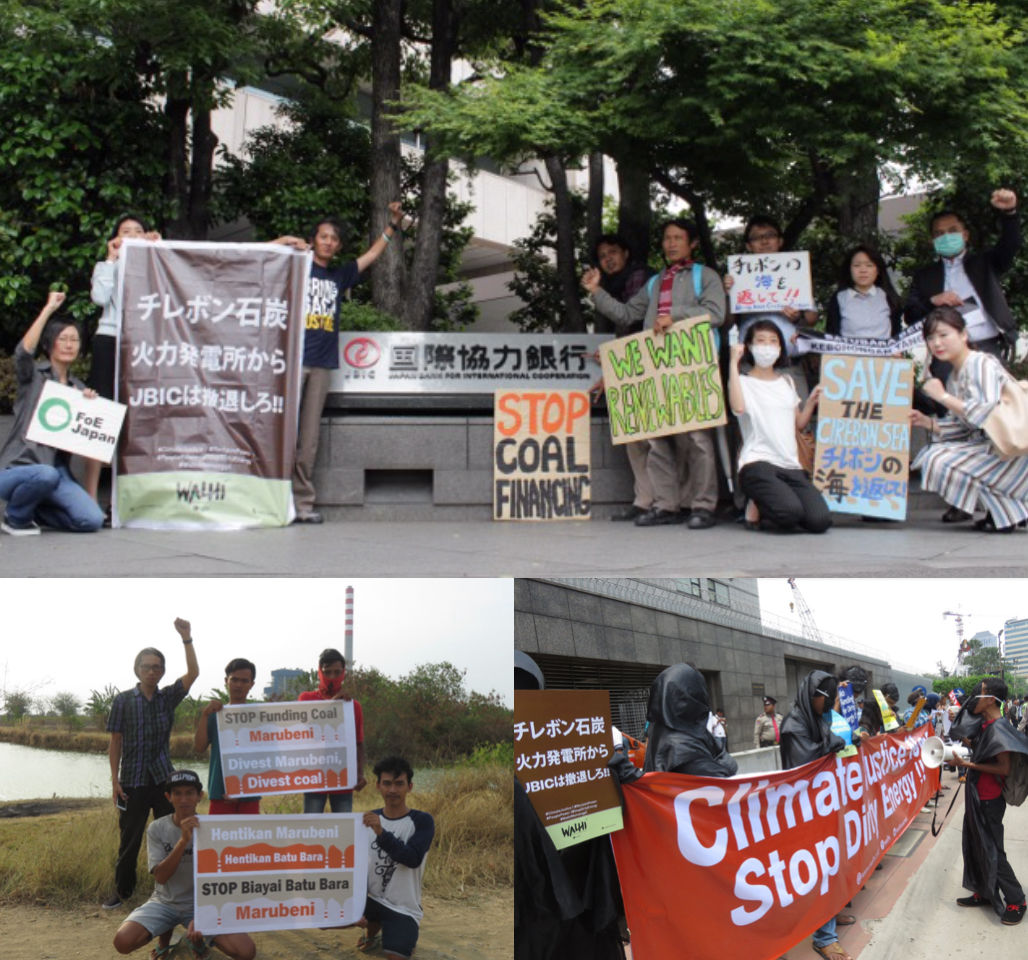 (Top) Cirebon residents and NGO members protest in front of JBIC headquarters on May 25, 2017. (Bottom) Protests in Indonesia, in front of Cirebon 1 (left) and the Japanese embassy (right) in Jakarta. Photos courtesy of FoE Japan.

(Originally published in Japanese on Nov. 27, 2018. Translation by Annelise Giseburt.)