In Japan, drug prices are set by the Ministry of Health, Labour and Welfare’s Central Social Insurance Medical Council, which makes its decision based on pricing plans developed by the Drug Pricing Organization (DPO).

Nine of the 11 DPO core committee members received payments from pharmaceutical companies in lecture and consulting fees in fiscal year 2016, averaging just over 5 million yen (about $47,000) per person. The top three earners — including the committee chair, University of Tokyo professor of geriatric medicine Masahiro Akishita — each received over 10 million yen (about $94,000).

However, the health ministry discloses neither the amounts committee members receive in pharma payments nor the names of the companies involved, a serious lack of transparency regarding potential conflicts of interest.

Barred from voting and deliberations

The health ministry does not list DPO members’ names online, but Tansa obtained them through a freedom of information request. In addition to the DPO’s 11 core committee members, a further 42 medical and pharmaceutics specialists are part of the organization.

Using our Money for Docs database, created in partnership with the Medical Governance Research Institute, we examined payments the 11 committee members had received from pharmaceutical companies in fiscal year 2016.

Regulations limit DPO committee members’ participation if they receive significant payments from pharmaceutical companies. If, in the past three fiscal years, a member has received more than 500,000 yen (about $4,700) in a single fiscal year from a company whose drug the committee is evaluating, they forfeit their voting right for that drug. For amounts over 5 million yen, they cannot even participate in deliberations.

Bagging 11.7 million yen (about $110,000), Gunma University professor of internal medicine Masahiko Kurabayashi was the highest earner among the committee. He was followed by the abovementioned Akishita and Nippon Medical School President Akihiko Gemma, who received 11.6 million yen (about $109,000) and 10.4 million yen (about $98,000), respectively. The average amount received from pharmaceutical companies was just over 5 million yen.

Two committee members, who specialize in dentistry, did not receive any payments.

The Central Social Insurance Medical Council sets the price of new prescription drugs following their approval for manufacture and sale.

The DPO is a subsidiary organization of the council, and it handles the actual work of calculating the price a drug should be sold at. The DPO committee chair makes quarterly reports to the council’s general meeting, at which its pricing plans are approved. As such, the DPO wields significant influence over drug prices. 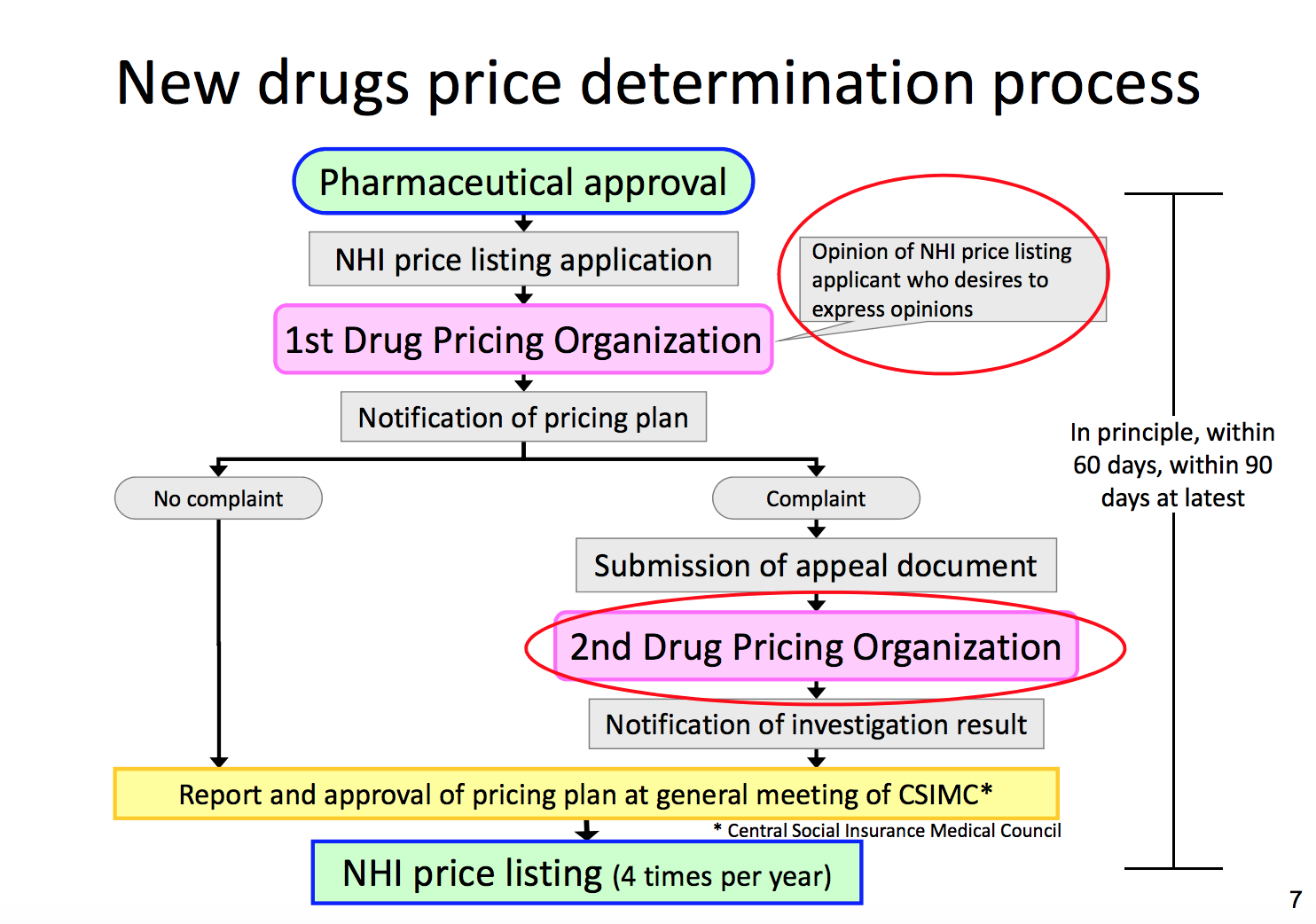 The Drug Pricing Organization develops pricing plans, which are then approved by the Central Social Insurance Medical Council. Chart by the Ministry of Health, Labour and Welfare. (Red circles in original.)

Tansa confirmed that pharmaceutical company representatives flock to the council’s drug price approval meetings. A book has even been published on the subject: “Pharma Reps Lining Up at Reception: The Truth about the Central Social Insurance Medical Council” (Hiromitsu Arai, Japanese only).

Pharmaceutical companies take such great interest in these meetings because the prices decided there play a major role in determining their profits.

Take, for example, the cancer medication Opdivo, which the Central Social Insurance Medical Council approved to be covered by insurance in August 2014. The DPO set its price at roughly 730,000 yen (about $7,000) per 100 mg vial. The decision was based on Opdivo being lauded as a groundbreaking cancer treatment. (The price was significantly revised down in February 2017.)

As a result of Opdivo’s high price point, its distributor, Ono Pharmaceutical, recorded 245 billion yen (about $2.3 billion) in revenue in its March 2017 financial results, a 53% year-on-year gain. Profit also doubled, at 56 billion yen (about $528 million). Both were record highs for the company.

Does the health ministry know that members of its Drug Pricing Organization receive significant additional income from pharmaceutical companies? To find out, Tansa submitted a freedom of information request to the ministry, currently under the leadership of health minister Katsunobu Kato.

But our request was rejected for the following reasons.

・There is a danger that the disclosure of this information could harm DPO members’ rights and interests.

・The disclosure of this information is not necessary for the protection of people’s livelihoods and health.

However, not all of the health ministry’s arms are so secretive. Members of its Pharmaceutical Affairs and Food Sanitation Council, which evaluates new drugs and their side effects, declare payments received from pharmaceutical companies whose products they are evaluating. This information is made available on the ministry’s website, meaning the public can check whether the council members are maintaining appropriate financial relationships with the pharmaceutical industry.

But the DPO does not offer this kind of transparency. There is no way for the public to examine its members’ potential conflicts of interest. Even our freedom of information request was denied.

Regulations stipulate that committee members are barred from voting and deliberations if the amount they receive in payments from pharmaceutical companies crosses certain thresholds. Was the DPO playing by the rules? Tansa spoke with committee chairman Akiyama to find out.

(Originally published in Japanese on June 15, 2018. Translation by Annelise Giseburt.)