Life under the crop duster

I was awoken a little past 5 a.m. by the crowing of my host’s rooster.

Its cries were soon followed by the humming of a propeller, which belonged to a small plane spraying pesticides over the Sumifru banana plantation.

People live under the plane’s path.

On the morning of Aug. 7, we visited a nearby three-hectare banana plantation owned by Flordelisa Salvador (50). Her house, where she lives with four other family members, lies right in the middle of her plantation. White specks of pesticide stained the leaves of the trees in her garden.

Watched by the black fighters

Sumifru purchases the bananas harvested here. Salvador, who owns the land, sells exclusively to Sumifru as a contract grower. Bananas harvested on her plantation are transported to the packing plant.

Although bananas are sold in packs of four or five in Japanese supermarkets, that isn’t how they grow on the tree. In fact, the term “tree” is misleading. Banana plants look like trees, but they are actually large, thick stems, from which hang clusters of 10 to 15 bananas each. These series of clusters, just under a meter in length, are wrapped in plastic bags and delivered to the packing plant. 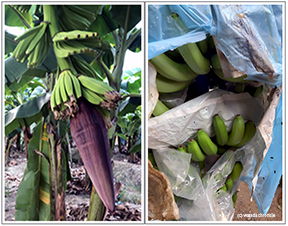 Banana plant stem (left). The flower at its tip, called the “banana heart” in the Philippines, has been covered. The “heart” can be eaten and is also sold in the market. When the bananas grow larger, they are wrapped with newspapers and plastic bags to protect them from insects and sunlight (right). Photo taken on Aug. 14, 2019 in Montevista, Compostela Valley (now Davao de Oro) Province, Philippines. (C)Tansa

The bananas are sorted at the plant. Not all of them can be packaged and sold in Japan. Damaged or irregular bananas are removed, to be sold domestically or used as feed.

Sumifru pays its contract growers about 215 pesos per one 13.5 kilogram box of bananas. Payments are made every 15 days. Salvador’s most recent take-home payment from Sumifru was 6,000 pesos.

However, that sum doesn’t translate directly to her income. Salvador employs four workers on her plantation. She pays them a total of 12,000 pesos every 15 days for 12 days of work. Each worker receives 2,400 pesos, meaning their daily pay only amounts to 200 pesos. Salvador can’t even afford to pay her workers the daily minimum wage, which for agricultural labor is 391 pesos.

“I keep asking Sumifru to raise the amount they pay per box, but they won’t do it,” she said.

Although Sumifru pays 215 pesos per box of bananas, Salvador could get between 300 and 500 — or occasionally even 600 — pesos per box at the market. Her income would increase if she sold her bananas there, but as a contract grower, Sumifru prohibits her from taking her product elsewhere.

If they catch a grower selling to other buyers, they tell them “not to steal Sumifru’s bananas.” Salvador knows of other plantation owners who were arrested for doing so. 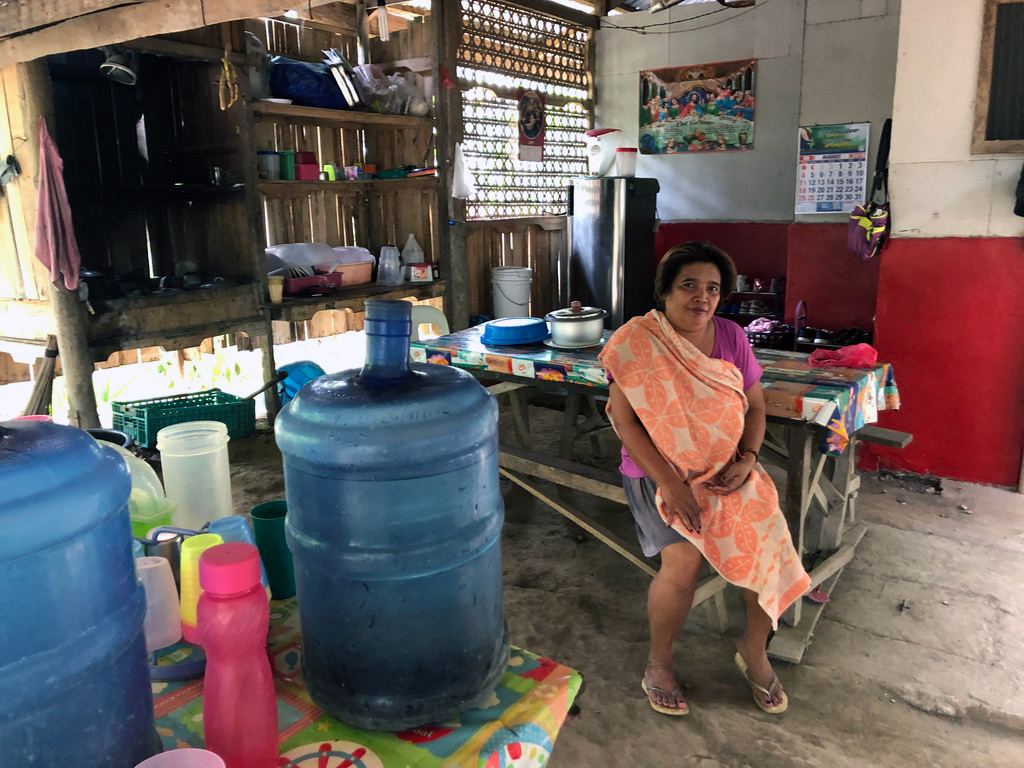 Inside their blue plastic bags, the banana clusters were wrapped in old papers as well. Upon closer inspection, they were all Japanese newspapers.

Heaps of them lay on a bench in one part of Salvador’s plantation. There were multiple copies of a single Asahi Shimbun issue published by the paper’s Osaka head office. Kobe Shimbun was there too. They had never been opened.

When I asked why she used Japanese newspapers, Salvador replied, “I have to buy them from Sumifru for 50 pesos per kilogram. I could get a kilogram of old papers for 25 pesos in the market though.”

I also spotted a fallen copy of Yomiuri Shimbun, the supply of which Salvador’s plantation had already used. But for some unknown reason, most of the newspapers wrapped around the banana clusters were Asahi. 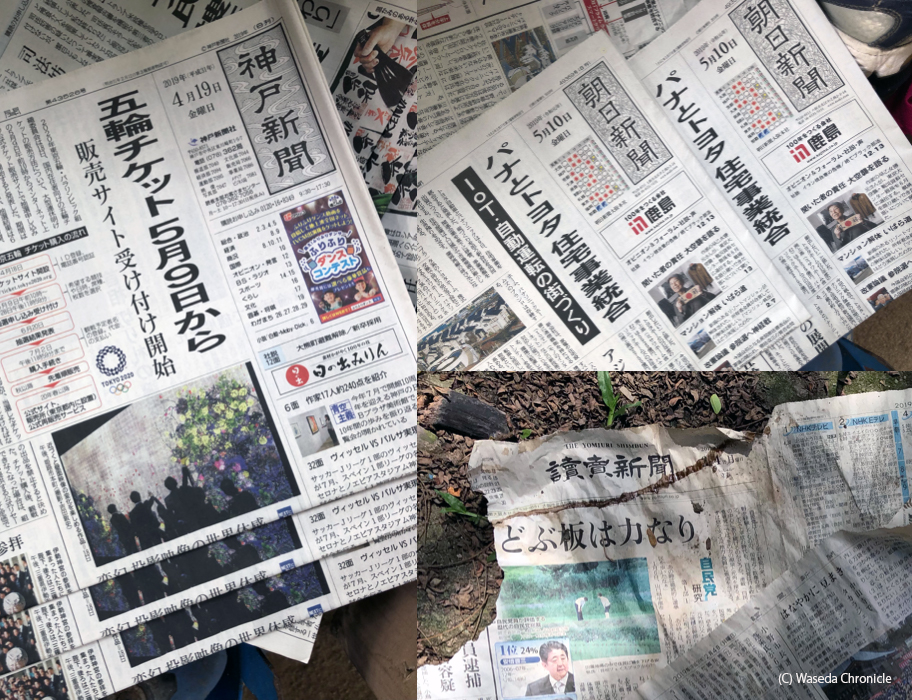 According to Sumifru pay slips saved by another contract grower, old papers purchased by the grower on June 25, 2015 cost 20.13 pesos per kilogram. The price had more than doubled in the four years since then. Growers also purchase fertilizer and pesticides from Sumifru for more than the market price.

These costs are deducted from growers’ income. They hire harvesters with what’s left, although they can only offer extremely low wages.

And so the cycle of poverty continues.

That morning, bananas wrapped in Japanese newspapers made their way to the Sumifru packing plant. 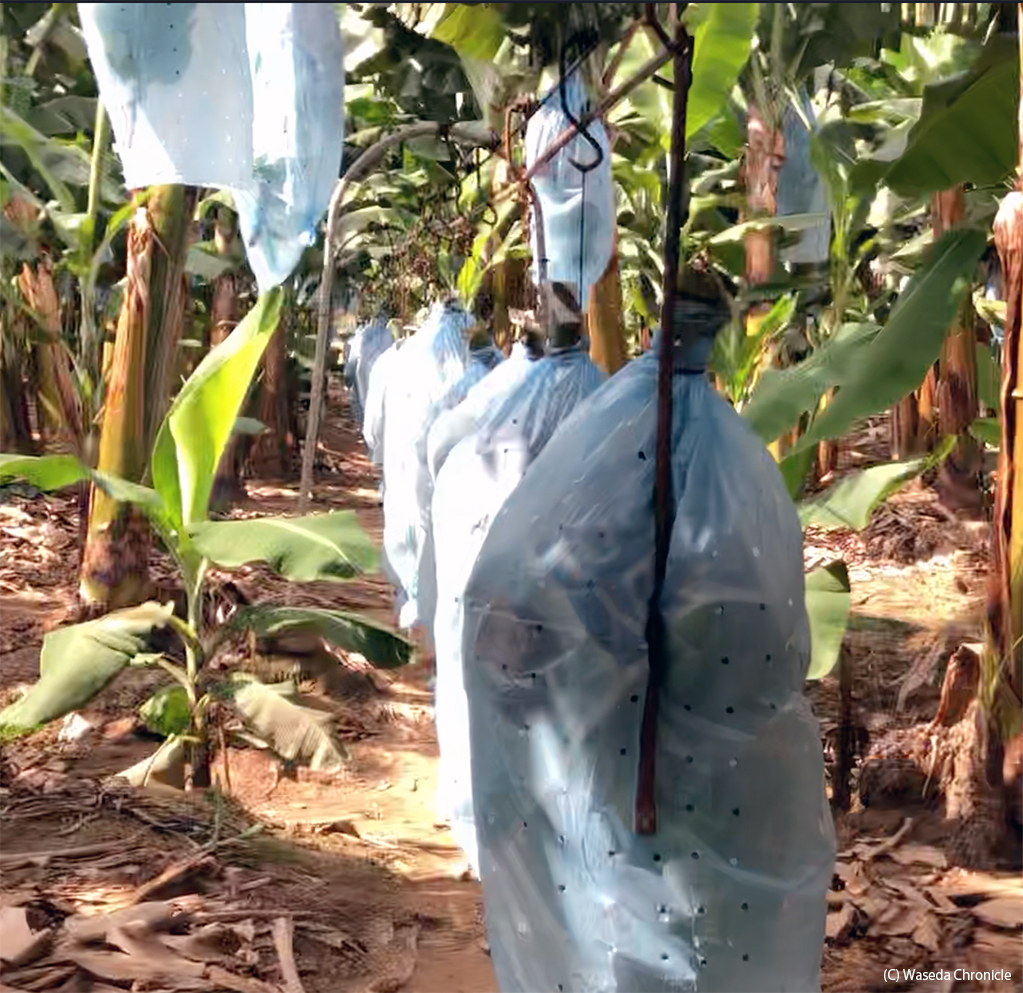