Ruel Mondano (43), a union member fired from his banana packing plant job by Sumifru, arrived at his friend’s house, where I was conducting interviews.

Before he came for the interview, Mondano had asked his friend about me: “Since he’s Japanese, do you think he has some high-tech equipment?”

Mondano was on the hunt for Yamashita’s gold and said he knew where it was buried.

Many in the Philippines believe in this legend. It is said Japanese general Tomoyuki Yamashita hid vast riches in the Philippines during World War II. Even in the area near Compostela, it is rumored that 12 gold bars were once found buried at an elementary school. Apparently a Japanese unearthed them. Some even say the governments of the Philippines and Japan have a joint plan to reclaim the buried treasure.

Mondano is a believer.

“It’s in the mountains, about two hours away by car,” he said. “Two rocks half-buried in a V shape mark the spot.”

Mondano didn’t own the land in question, but he bet that if we bring equipment to help search, the owner will agree to split the prize 50-50.

It wasn’t hard to understand why Mondano was wild for buried treasure. He and his family have nothing. 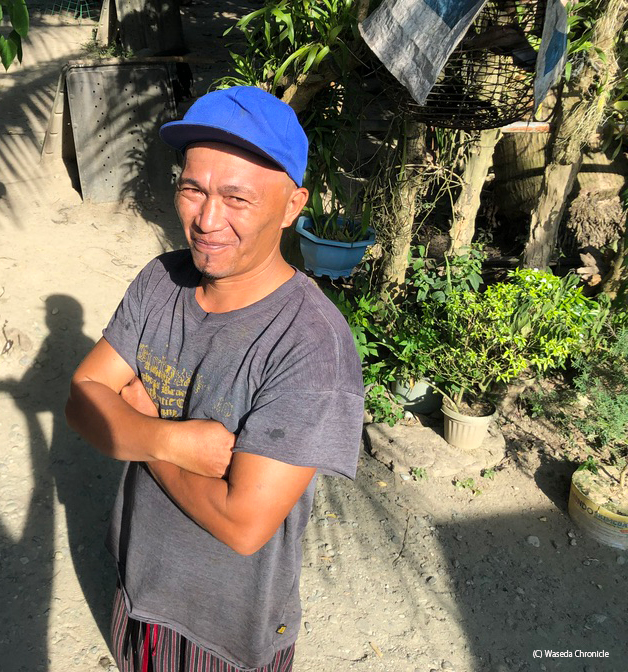 Mondano lives with his wife (40) and two daughters (16 and 12). He was hired at another banana plantation after being fired by Sumifru, but there is only enough work for him two days per week. The daily wages are only between 200 and 250 pesos. His wife was fired by Sumifru as well and now packages bananas for another company. She too earns at most 200 pesos per day.

“We’re barely getting by. A friend’s birthday really is reason to celebrate — we get a proper meal at the party,” Mondano said.

Although he used to buy 15 kilograms of rice every payday, now he can only afford two. Mondano and his wife give the rice to their daughters and eat bananas themselves.

His daughters’ commute to school costs 20 pesos per person, and he gives them each a 10-peso daily allowance. That’s 60 pesos per day. His wife scrapes together the money by cooking dishes with the jackfruit and alugbati (malabar spinach) growing in their garden and selling them to the neighbors.

“I became even more interested in Yamashita’s gold after getting fired,” Mondano said.

When he left, Mondano took with him papaya and gabi (a kind of taro) that he had received as a present. “These will be our dinner tonight,” he said.

Mondano and his family aren’t the only ones struggling to get by after being fired by Sumifru.

Gloria Delantes (61) has seven people in her family. At Sumifru’s packing plant, her job had been to put labels on the bananas. She lives with her daughter, son-in-law, and four grandchildren, the eldest of whom is in high school and the youngest of whom is three. Delantes’ daughter, who also worked at the packing plant, was fired for participating in the strike too. Both are currently unemployed.

Their livelihood depends on Delantes’ son-in-law, who works as a crane operator in Davao. He returns home once per week. The trip takes three hours one way on public transportation. With his wages, the family gets by on 30 kilograms of rice per week.

“We make do somehow. Just use one bar of soap, things like that,” Delantes said. “My son-in-law gets advances on his salary. He gives a 20-peso allowance to his eldest child, and the elementary schoolers each get 10. We definitely can’t afford to get sick.”

Before he was fired by Sumifru, Jandugam worked on the banana plantation, covering the banana clusters with plastic bags. He supports his wife (41) and three children. Although they used to go through 20 kilograms of rice per week, now they limit themselves to half that. They eat moringa, eggplant, and alugbati grown in their garden.

“I’m always hungry, so I fill up on water,” Jandugam said. “That’s how I get through the week.”

In June 2019, he applied for a job planting rice but was turned down for having participated in the strike.

Alicia Pillo (54) wasn’t able to borrow as much money as she requested because she has no income.

Jeaneth Garido (43), one of the union leaders, said, “The fired union members work one day here, the next day there. But even if they find employment, it’s only for two or three days per week. Many members can’t participate in the union’s meetings and protests. Right now, returning to work is our first priority.” 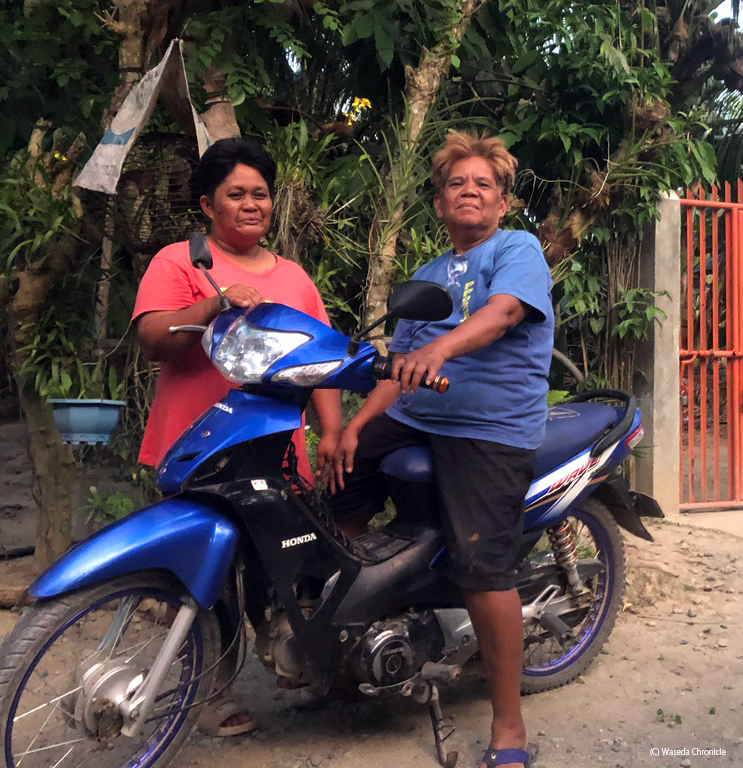 Gloria Delantes (right) sits on her motorcycle, an indispensable part of everyday life. On the left is Jeaneth Garido, one of the leaders of joint labor union Namasufa. Photo taken on Aug. 12, 2019 in Compostela, Compostela Valley (now Davao de Oro) Province, Philippines. (C)Tansa