Leaving for the Gulf

I stayed with locals while in Compostela and spent time with the neighborhood children who came to play. Through our conversations, I realized that some were separated from their mothers, who had left Compostela to work abroad.

Unable to find a well-paying job — or sometimes any job at all — they left home to work as maids. Men, too, found employment as sailors on various countries’ vessels.

Crezy Baste (24) was one such migrant worker. Although she had worked at a Sumifru packing plant, Baste had struggled to support herself on the company’s low wages. She quit her packing plant job and went to work as a maid in Saudi Arabia.

However, she returned home after just two months. What went wrong?

Although it’s not directly related to the banana business, Baste’s story and the stories of those like her help illuminate how people in Compostela live. 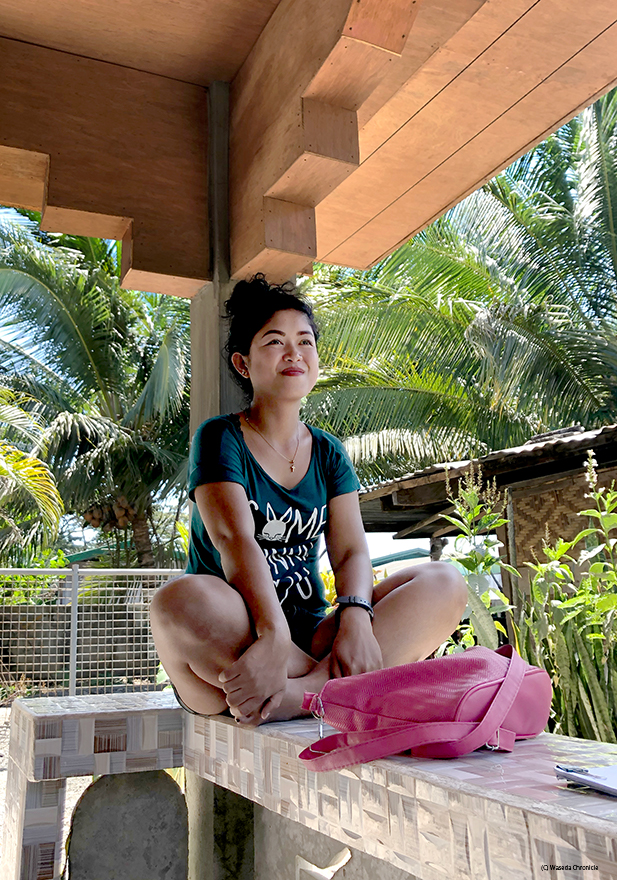 Baste traveled from the Philippine capital, Manila, to Jeddah, Saudi Arabia, on July 16, 2018. Located on the Red Sea, Jeddah is one of the Gulf Coast’s prominent port cities. It is the second largest city in Saudi Arabia after the capital, Riyadh.

Baste’s employer, a woman, met her at the Jeddah airport when her flight landed at 3 p.m. They drove to the employer’s large, four-story house. The first floor was rented out, and the employer’s son lived on the second and fourth floors. Baste was responsible for the third.

She was put to work as soon as she arrived.

That night, the employer cooked dinner for her mother.

But her mother didn’t eat it. Suddenly, the employer exploded at Baste, even though she had not been the one to prepare the meal. The employer slapped Baste across the right side of her face. Baste didn’t know why she had been hit. All alone, she cried herself to sleep that night.

Baste’s working hours were from 8 a.m. to 2 a.m. She had no days off, nor was she allowed to leave the house.

The employer threw things when she got angry. She would also strike Baste’s head with her fist and pull her hair. “She wore a jeweled ring, so the punches really hurt,” Baste said.

Attacked with a knife

One day, after Baste had been working in Saudi Arabia for about a month, her employer’s son was due for a visit to his mother.

“Cut a melon and bring it here,” the employer ordered Baste. She did as she was told.

However, the son didn’t show. The employer grabbed Baste by her chest and thrust at her with a knife.

Baste had no idea why she was being attacked like this.

“I thought I was going to die,” she said. “But right at that moment, my employer’s grandchild appeared and stopped her.”

Baste immediately reported the incident via text to the intermediary in Davao, Philippines. “I want to come home,” she said.

However, the intermediary only responded that Baste’s employer insisted that she hadn’t attacked her maid. “The house has security cameras. Please check the video,” Baste pleaded, but to no avail.

The Davao intermediary passed her message along to the one in Saudi Arabia. Baste, along with the employer and her son, went to discuss things at the intermediary’s office. The son used his smartphone to translate Baste’s Tagalog into Arabic.

The employer denied everything. “I’ll keep working if you stop hurting me,” Baste said, and they returned to the house together.

Baste texted a cousin in Compostela: “Please tell my mom what’s going on.” The cousin’s mother passed the message along to Baste’s mother, Elma Baste (50).

“Please help Crezy,” the cousin said. “She says she was attacked with a knife. I’m sorry I can’t do more to help.”

“I understand. I’ll do whatever it takes to find someone who can help,” Elma replied. But she had no idea who to turn to.

After a little while, an acquaintance suggested that Elma speak with Migrante, an organization that supports Filipino migrant workers around the world. The round trip to the Migrante branch office in Davao cost 400 pesos, a day’s wages. Elma scraped together the money and went to Davao.

At the same time, Baste decided to return home from Saudi Arabia. The employer’s behavior had not changed at all since their meeting at the intermediary’s office.

Using two months’ wages — all she had earned so far — Baste bought a plane ticket to Manila. She made it back to Compostela on Sept. 20, 2018.

Baste had not told her mother she was returning to the Philippines. When she suddenly appeared at home, the two cried as they embraced.

After returning to Compostela, Baste was briefly able to resume her job at the Sumifru packing plant. However, she was fired for participating in the strike that began on Oct. 1, 2018. She currently works for a small banana packager, but the work isn’t constant.

Marilyn Beringuel (51) had been listening to Baste’s story. “People in the Gulf nations look down on Filipinos,” she said angrily.

Beringuel’s daughter (27) had found work as a maid in Qatar. She hadn’t sent money home for the past four months, and at first Beringuel didn’t understand why.

According to the texts Beringuel received from her daughter, she was staying in a boarding house run by a Qatar-based intermediary. Many Filipina women lived there. Beringuel’s daughter said she wasn’t allowed to leave the boarding house except on the three days per week she had work. Due to an apparent problem with her visa, she also couldn’t come home.

Beringuel was worried about her daughter, but her daughter was equally concerned for their family. “Won’t money be tighter if I make it home?” she asked her mother. 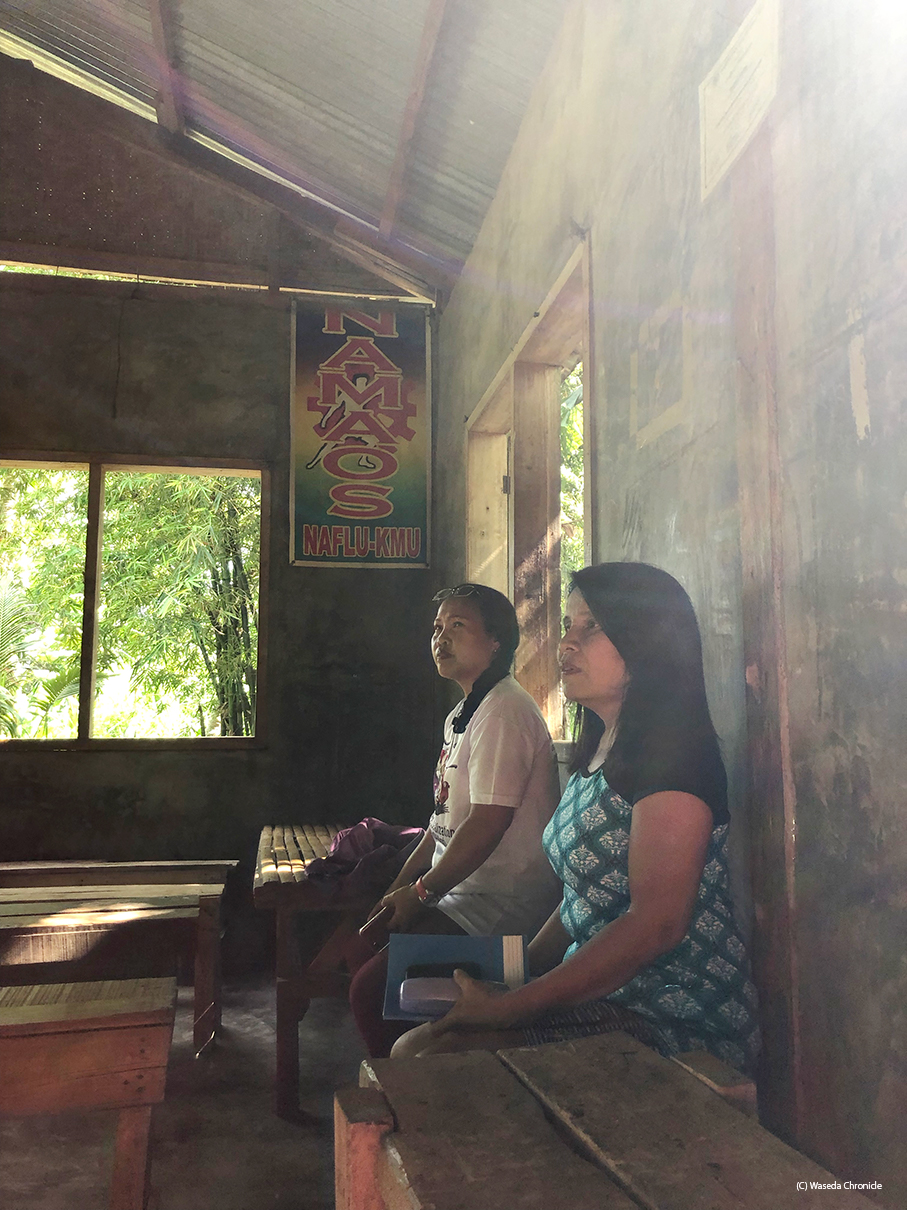 Like the other union members, Beringuel lost her income after being fired for participating in the strike. She takes care of her daughter’s two children, a daughter (9) and a son (7), while their mother is abroad.

Jemar Gabato (36), who was also fired from his job at a Sumifru packing plant, has a similar story. Although his wife went to work as a maid in Saudi Arabia, she never sent money home. The couple separated in 2015, while Gabato’s wife was still abroad. He raises their four children, aged 12 to 9, by himself.

If work in Compostela allowed residents to support their families, they wouldn’t have to seek employment abroad.

According to Arman Hernando (32), vice chairperson of Migrante International (located in Quezon City, Metro Manila), 2.3 million Filipinos worked abroad in 2018 alone. Women, often working as maids, comprised over half that number. Migrante hears of many cases of workers who are not allowed to go outside or who are victims of sexual harassment and assault. Migrant worker earnings account for roughly 10% of the Philippine GDP.