Burned to the ground

This was not the first time Dizon’s home had been set on fire. 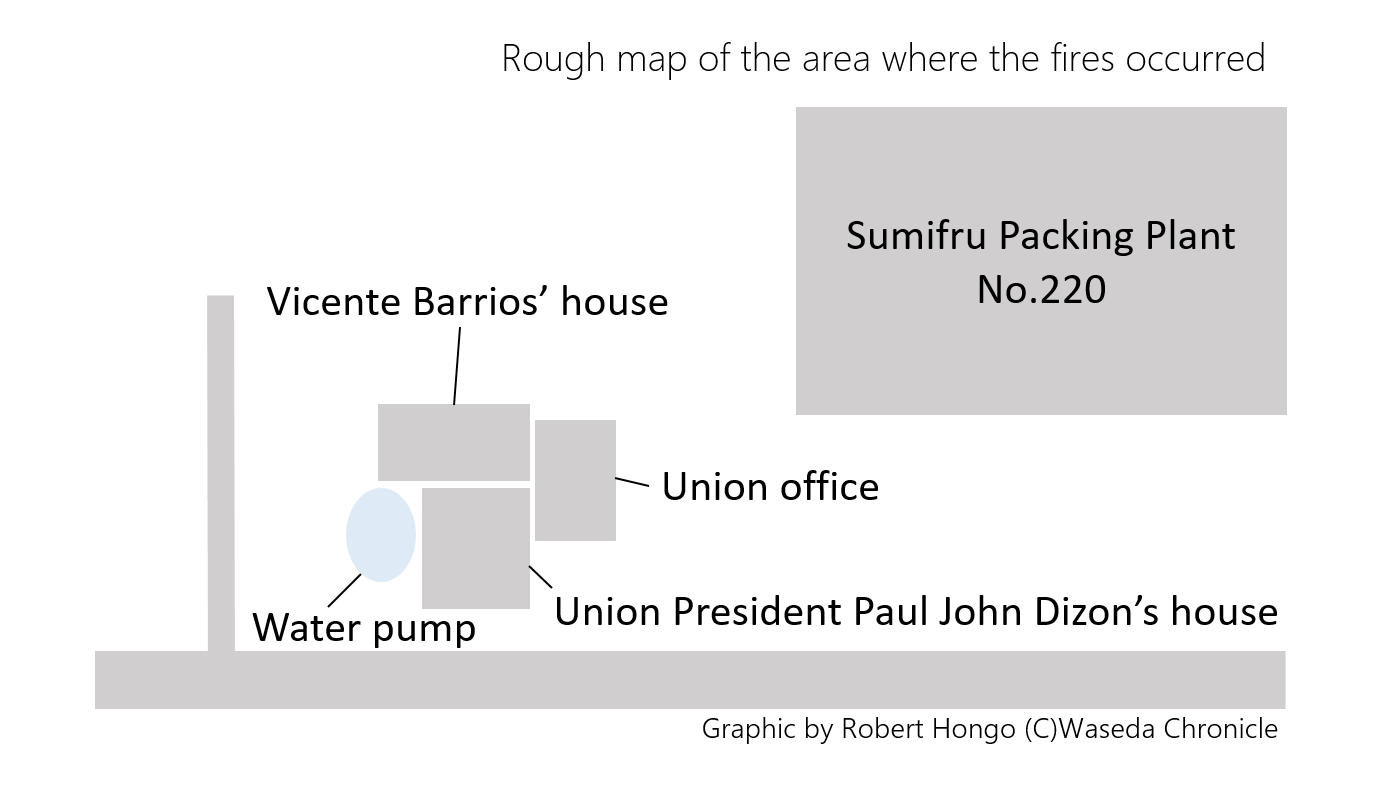 The first fire occurred on Nov. 29, 2018, about two months after Namasufa’s strike began.

Both the union office and former union president Vicente Barrios’ house stood on the same plot of land as Dizon’s.

According to union members’ account, Barrios was awoken around 2 a.m. by Dizon’s father shouting, “Fire, fire!”

Rushing outside, he saw flames streaming out of Dizon’s house, which was next to the road.

Since the strike began, the area had been a gathering place for union members.

Everyone present filled buckets with water at the plot’s pump and fought the fire. Although they were soon able to put it out, the area still stank of gasoline.

Dizon was in Manila at the time. Eight family members were at home.

No one was injured. The next night, union members stayed up to keep watch at Dizon’s house.

Around midnight, through a window they saw two men on a motorcycle stop near the house. Both were tall and carried rifles. The men dismounted from the motorcycle and came closer. Pointing their guns at the house, they shouted, “We’re the NPA!” NPA stands for New People’s Army, an armed communist group. It was clear the men were lying.

Fearing for their safety, everyone evacuated to Barrios’ house, which stood immediately behind them. Shots rang out.

After the men left, the union members found eight fallen cartridges. Barrios knew it was too dangerous to stay; he moved in with relatives living in another part of town.

Then came the second fire.

Two weeks later, on Dec. 15, the cluster of homes was again set alight.

This time, with no one to put out the blaze, Dizon’s house, Barrios’ house, and the union office all burned down. The ruins were still smoking when union members arrived the next morning. As everyone had moved out following the initial arson and shooting, there were no casualties.

The union had planned to hold a meeting at the office that day. Many members would have gathered there. Given the timing of the fire, they suspected that information about the meeting had leaked.

In response to our questions, the Compostela police denied that the fire could have been arson, calling it “just an accident.” 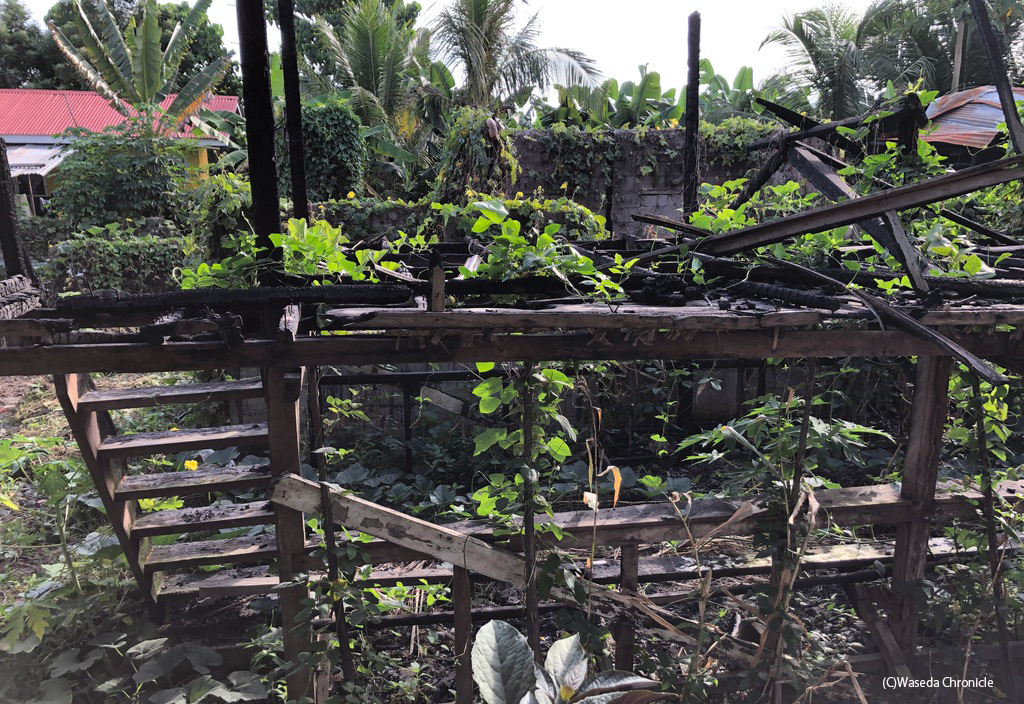 “If something happens, it’s on Sumifru’s head”

Union members continue to be harassed to this day.

On Aug. 6, 2019, Namasufa Vice-President Elizar Diayon (34) went to the Sumifru management office to participate in a negotiation between the company and the union. He spotted two men at the gate, one sitting on a motorcycle.

“It’s them!” Diayon was sure the two were goons hired by Sumifru. 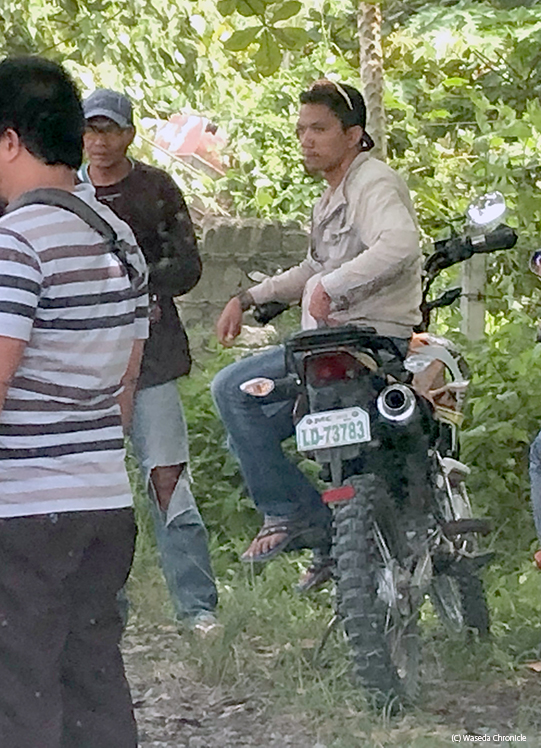 He remembered their faces from an incident that had taken place about 10 months earlier, on Sept. 21, 2018.

The two were among three men riding motorcycles who showed up at Diayon’s parents’ house around 1 p.m. that day. Diayon lived next door.

At the time, he was napping at home.

The men repeatedly demanded that Diayon’s parents, who were resting in the shade of a jackfruit tree next to their house, tell them his whereabouts.

“Why’s your son so pig-headed, huh?” the men said. “Why won’t he quit his job as union leader? He’s too stubborn. We have to take him to the battalion [military station].”

The men wouldn’t leave, even after 30 minutes.

“If what you’re doing is right, why don’t you take it up with the barangay captain [village head]?” Diayon’s father (60) asked. One of the men replied, “We won’t get anywhere with the captain.”

“That’s [Diayon’s] motorcycle, isn’t it? He must be here,” the men said. They took photos of the motorcycle with their smartphones. “There’s no way he’s out if his bike is here.”

“It’s been left here for a while. He’s not home,” Diayon’s father replied.

He pretended to leave to go shopping, then knocked on Diayon’s door.

“Three men are looking for you. Get out of here,” he said.

Diayon left immediately. As he did, he got a look at the three men’s faces. One was wearing a mask. The others were the two he recognized the day of the negotiation with Sumifru.

Following a dried-out waterway behind his home, Diayon fled to his cousin’s house.

From that day on, Diayon returned home only infrequently.

Eric Tubo, who works in employee relations for Sumifru, represented the company during the Aug. 6 negotiation at its office. Immediately after their talk finished, Diayon also spoke to Tubo about the men he believed Sumifru had hired.

“If you don’t stop working with those men and something happens to a union member, it’s on Sumifru’s head!” he told Tubo.

After I finished interviewing Diayon at a house in Compostela, he put on a mask and wrapped his head in a scarf before driving off on his motorcycle. Another union member followed close behind Diayon a on bike of his own — an escort.

After seeing them off, union Secretary Melodina Gumanoy (43) said by way of explanation, “He’s being targeted.” 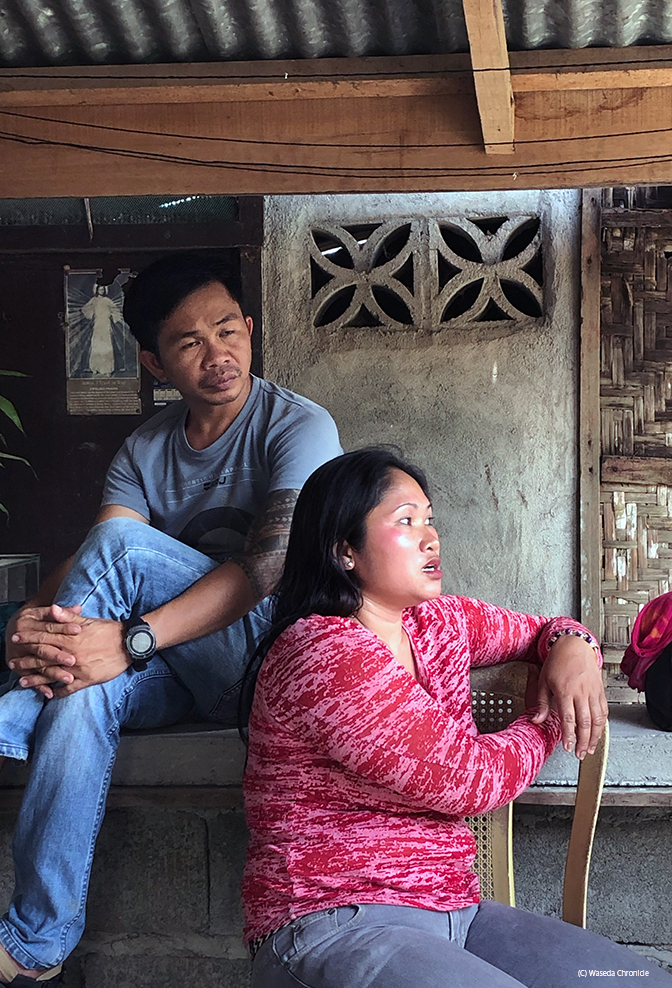