“He was a great guy”

Rice, vegetables, meat, fish, fruit like rambutan and durian, cigarettes, sandals, and t-shirts can all be found at the market in central Compostela. Complete with a taxi stand for tricycles (three-wheeled autorickshaws) and habal-habal (motorcycle taxis), the market is always lively. An elementary and high school stand nearby. In the evening after school, an energetic group of students crowded the market 7-Eleven. At its entrance, a guard carrying a baton kept careful watch on those going in and out.

The evening also heralded a food stall opening in a busy section of the market. I ordered kwek kwek, deep-fried eggs whose batter included banana ketchup, at the stall for 10 pesos (about $0.20; 1 peso = $0.02).

Joint labor union Namasufa member Danny Boy Bautista (31 at the time) was eating kwek kwek at this stall when he was killed on Oct. 31, 2018. 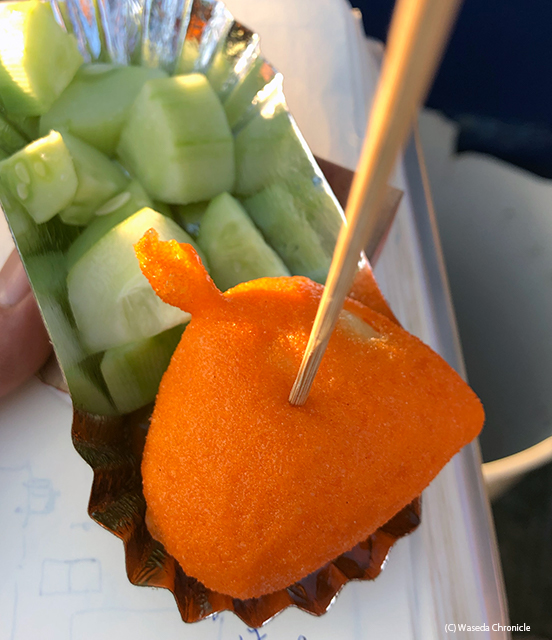 Danny Boy had harvested bananas for Sumifru. Along with his colleagues, he had participated in Namasufa’s strike.

Randy Fuyonan (48), leader of Danny Boy’s harvesting group, was in the market the evening of Oct. 31. Near the town hall, Fuyonan ran into a cousin, who said, “I hear someone from your village has been killed. Not an acquaintance, I hope.”

Fuyonan headed for the spot his cousin had mentioned; it wasn’t far. A crowd had already formed by the time he arrived.

A man had fallen on his side next to the food stall. Fuyonan couldn’t tell who it was.

The police soon arrived. As part of their inspection, they turned the body to photograph the victim’s face. Fuyonan was finally able to recognize him.

Fuyonan saw that Danny Boy had been shot four times, once in the right side of his neck, twice in his right arm, and once in his back.

The time of the shooting is unclear. Fuyonan said it happened around 4:45 p.m., the local paper said around 6 p.m., and the Namasufa members who rushed to the scene said between 5:30 and 6 p.m.

“Why kill him?” and “He was one of us” could be heard from among the gathered crowd.

The undertaker arrived to take the body at 7 p.m.

According to Fuyonan and others, Danny Boy had helped prepare food at a union meeting place at 11 a.m. that day. He worked busily and went out to buy cola and fried chicken too. After finishing lunch, he returned home. In the evening, he went to pick up his wife, who worked in town. He stopped at the stall on the way, where he was shot.

We asked people in the area about the assailant. “My shop was already closed by then.” “I don’t know anything about it.” The townspeople weren’t talking. A woman in her 20s working at a general store said, “I heard the shots. I went outside briefly, but I got scared and soon returned to the shop. I didn’t see anyone suspicious.” 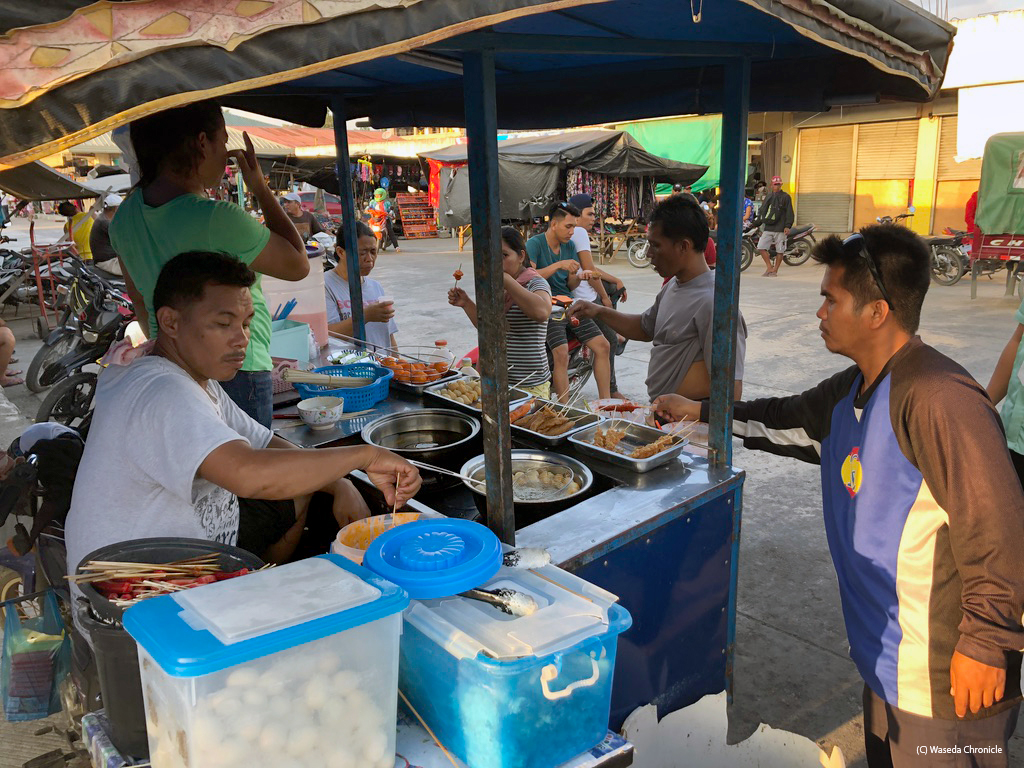 “He was a great guy,” Fuyonan said of Danny Boy. “He was kind. There was no reason to kill him. He enjoyed having a drink and was always respectful. At work, he encouraged others with words like, ‘Let’s get this done together so we can break early.’”

Reymark Macasusi (28), one of the union members who had rushed to the market by van, said Danny Boy was “considerate and friendly” and that he would do small acts of kindness like buying juice for union members.

“He never did anything wrong or was criticized by others. I can only imagine he was killed for joining the union and participating in the strike,” Fuyonan said.

Danny Boy’s harvesting group had 16 members, and he was one of the youngest among them. After the strike began, Danny Boy helped with security for the union. He visited with various groups, advocating for the striking workers.

The night of the murder, Namasufa Vice-President Elizar Diayon (34) and others went to Danny Boy’s house to tell his wife what happened. According to Diayon, they had the following exchange.

“The union will help support your family and the cost of the funeral service.”

“Thank you,” she replied.

But later, when Diayon and others again visited Danny Boy’s wife, her stance had changed dramatically. “We don’t need your help,” she said.

Only later did the union learn that soldiers and police had called on her the day after Danny Boy was killed. Although they don’t know what exactly was discussed, Namasufa Secretary Melodina Gumanoy (43) said, “Her attitude changed after being visited by the soldiers and police. I think she’s scared.”

Despite her refusal of help, the union sent half a pig and 50 kilograms of rice for Danny Boy’s funeral.

Fuyonan had tried to encourage his colleagues, telling them, “We’ll be careful and protect ourselves.” Still, seven of the 16 people in his harvesting group quit the union.

“They left because they’re scared,” he said. “I bet their families were worried and asked them to quit.”

“We don’t have any proof that Sumifru was involved, so we can’t file a lawsuit. But I can’t think of any other reason to kill Danny Boy than to break up the union,” Diayon said. 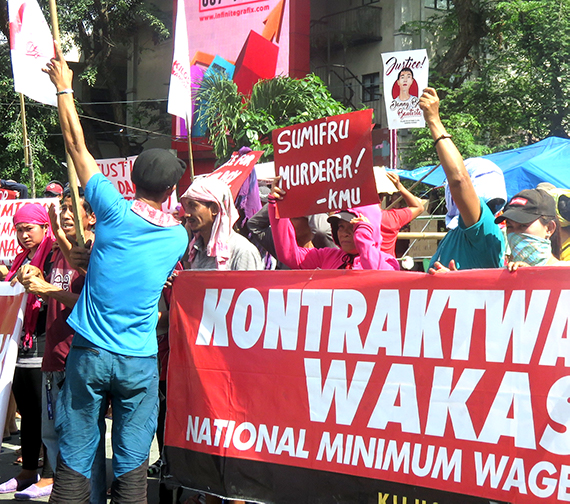 “What are you going to do with this information?”

Wanting to learn more about the case, we visited Compostela’s police station, located in the center of town.

We approached an officer near the station entrance: “We would like to ask about the man who died in the market last year.” His smile vanished.

We were referred to the police chief, who personally showed us to his office on the second floor.

“I was just assigned here, so let me call in a detective familiar with the case,” the chief said. The detective stood beside him, case file in hand. They responded to our questions in English and Tagalog. The chief sent texts on his smartphone as he spoke with us.

“There are other incidents of gun violence in this town,” he said. “Why do you want to know about Danny Boy’s case?”

“What are you going to do with this information?” He bluntly asked the reason for our interview.

The detective spoke to the chief in their native Visayan. Although we couldn’t pick up everything, we heard him say, “Danny Boy was just a normal banana harvester, not a member of the Namasufa union.”

That was a lie. Were the police trying to pass off Danny Boy as just a random victim? If they didn’t acknowledge that he was a Namasufa union member, the police could treat his death as unrelated to Sumifru and the strike.

“This case was passed to the courts on Nov. 13, 2018. The police are not at liberty to answer your questions,” the chief told us.

After we emerged from the police station, a plainclothes officer with a smartphone openly photographed us as we took our leave. 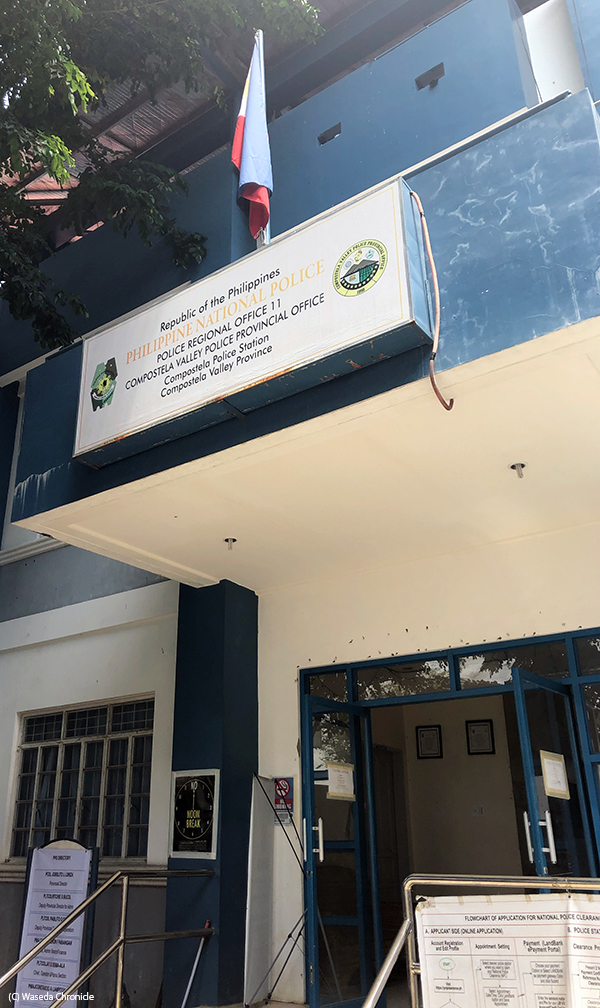