In the first part of “Blowing Unsmoke,” we tracked IQOS ads — targeting those “spending more time at home” — that appeared in the national Asahi Shimbun and Yomiuri Shimbun newspapers. But Philip Morris Japan was pushing IQOS in local papers too.

For instance, on May 16 the following appeared in the Kochi Shimbun, which holds an 86% market share in its eponymous prefecture (*1).

“More and more people are choosing IQOS in Kochi too!” Written in the provincial accent, the ad called for locals to switch from conventional cigarettes to heated tobacco.

It also promoted Philip Morris’ 14-day IQOS free trial program: “We’ve had about 230,000 rentals already. Why don’t you give IQOS a try too!”

All the above ads were run while Japan had declared a state of emergency to prevent the spread of Covid-19. Although data shows that smokers are at greater risk of developing severe symptoms from the virus, such findings appear not to have tempered Philip Morris’ campaign.

So why are “more and more” people choosing IQOS?

A man in his 30s, who works at a restaurant in Tokyo, said he switched from conventional cigarettes to IQOS because “it isn’t as bad for your health, and second-hand smoke isn’t an issue.”

His positive view of heated tobacco came from Philip Morris’ emphasis that IQOS is “smoke-free” and reduces the emission of harmful and potentially harmful constituents by roughly 90%.

Of course, Philip Morris is careful not to make claims it can’t prove. The newspaper ads shown above include a health warning that “IQOS is not risk-free.” And the package for IQOS tobacco sticks notes that “it cannot be denied that this product is harmful to your health.”

But these health warning are lax compared with those for conventional cigarettes, which clearly state that “tobacco smoke poses a health risk to those nearby.” It’s natural for smokers to think that IQOS is a safer option, even if it isn’t totally risk-free.

But is that true? Not according to public health specialists in the U.S., where Philip Morris is headquartered. 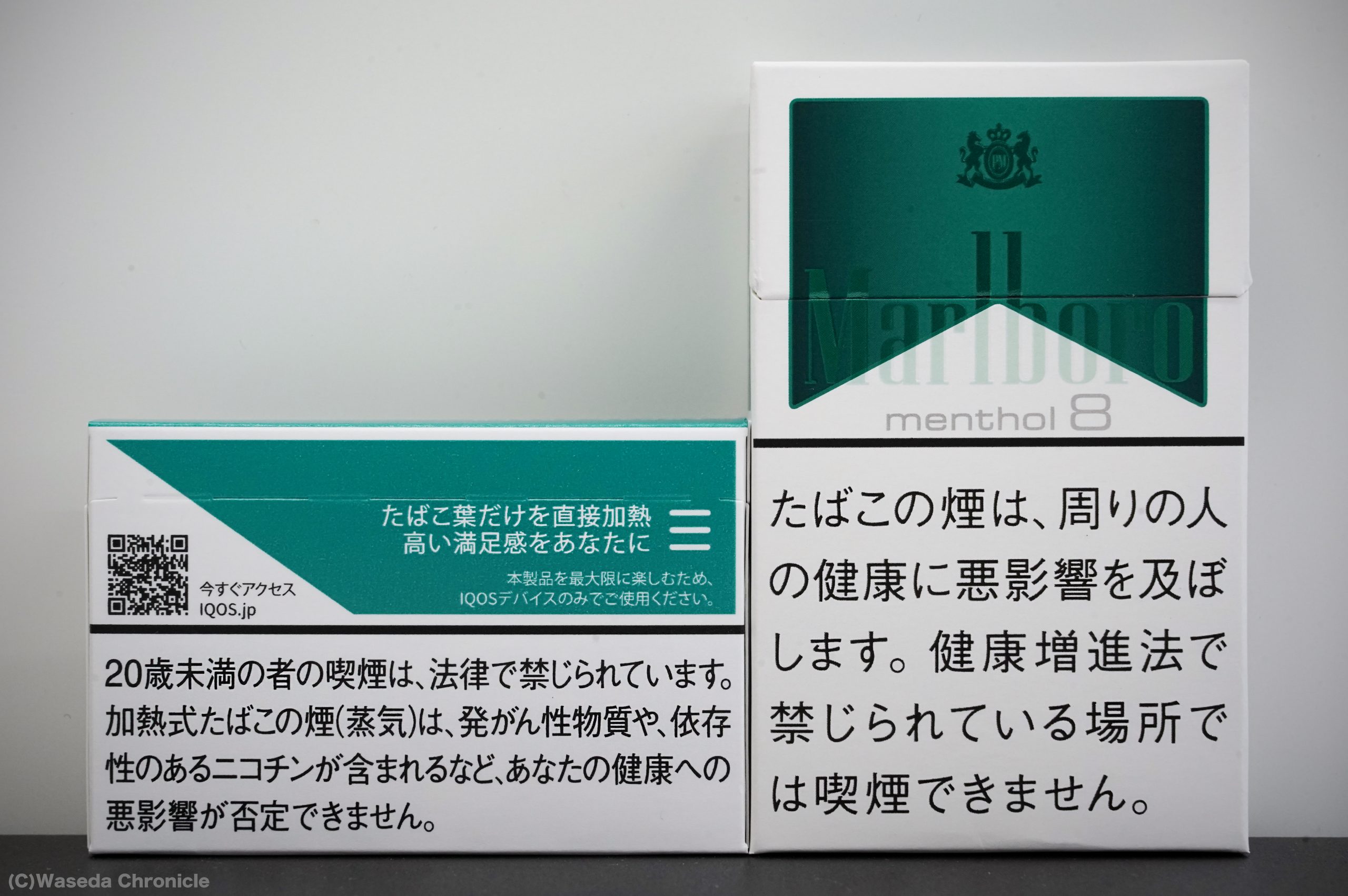 Differing health warnings between IQOS heated tobacco sticks (left) and conventional cigarettes. The cigarette package mentions the danger of second-hand smoke and reminds users that they can only smoke in areas permitted by law. The IQOS package mentions the presence of nicotine and carcinogens, as well as that “it cannot be denied that this product is harmful to your health.”

“No” from FDA committee

Philip Morris received permission from the Food and Drug Administration to sell IQOS in the U.S. in April 2019, four and a half years after sales began in Japan.

But although it allowed sales to go forward, the FDA did not grant Philip Morris’ initial request to market IQOS as a “modified risk” tobacco product.

In January 2018, the FDA’s Tobacco Products Scientific Advisory Committee deliberated on whether IQOS presents a reduced health risk. The meeting was attended by over 200 people, including representatives from the FDA, Philip Morris, government agencies, universities, the tobacco industry, and research institutions.

Chaired by Dr. Philip P. Huang, who had studied at the Harvard School of Public Health and served as chief of the Texas Department of Health’s Bureau of Chronic Disease and Tobacco Prevention, the committee included tobacco experts in academia and a representative of the general public.

Following two days of presentations and discussion, the nine committee members made their final decisions. With one abstention, the remaining eight voted “no” on whether “scientific studies have shown that switching completely from cigarettes to the IQOS system can reduce the risks of tobacco-related diseases.” Using the committee’s decision, the FDA did not permit IQOS to be sold as a modified risk tobacco product.

Philip Morris has since submitted further documentation and currently has a separate modified risk application pending with the FDA.

From the way the product is marketed, many smokers in Japan are switching to IQOS under the assumption that it’s less dangerous than conventional cigarettes. At the end of 2016, two years after IQOS was first introduced in the country, Japan made up roughly 90% of the product’s global sales.

Osaka International Cancer Institute doctor Takahiro Tabuchi, who has served on tobacco-related committees for the Japanese Society of Public Health and the Japanese Cancer Association, has continuously sought to bring Japanese smokers back down to earth.

“There’s no doubt that smokers are being snapped up by ads making them believe that IQOS is less dangerous than conventional cigarettes,” he said. “The papers eager for ad revenue are complicit in this problem. But it’s impossible to say that IQOS is safer. People are still falling victim to tobacco.”

(Originally published in Japanese on June 19, 2020. Translation by Annelise Giseburt.)