In 2020, smoking is more dangerous than ever: Studies have found that smokers are more likely to develop severe symptoms from Covid-19. For some, that could mean the difference between life and death.

But international tobacco giant Philip Morris appears to have noticed a silver lining to the pandemic. It just might be the perfect time to get smokers to switch from conventional cigarettes to its heated tobacco product, IQOS, which the company touts as “significantly reducing” emissions of harmful constituents.

But could heated tobacco products really be less harmful than conventional cigarettes? Is Philip Morris putting people’s health in danger in an attempt to capitalize on the pandemic?

As we looked into the matter, we found big tobacco to be far from friendless in Japan. For the government and media, benefiting from the industry’s substantial profits is proving a hard habit to kick.

Spearheaded by the Organized Crime and Corruption Reporting Project (OCCRP), “Blowing Unsmoke” is a joint investigation into an international giant. Alongside nine other newsrooms around the world, Tansa will report on the truth about heated tobacco. 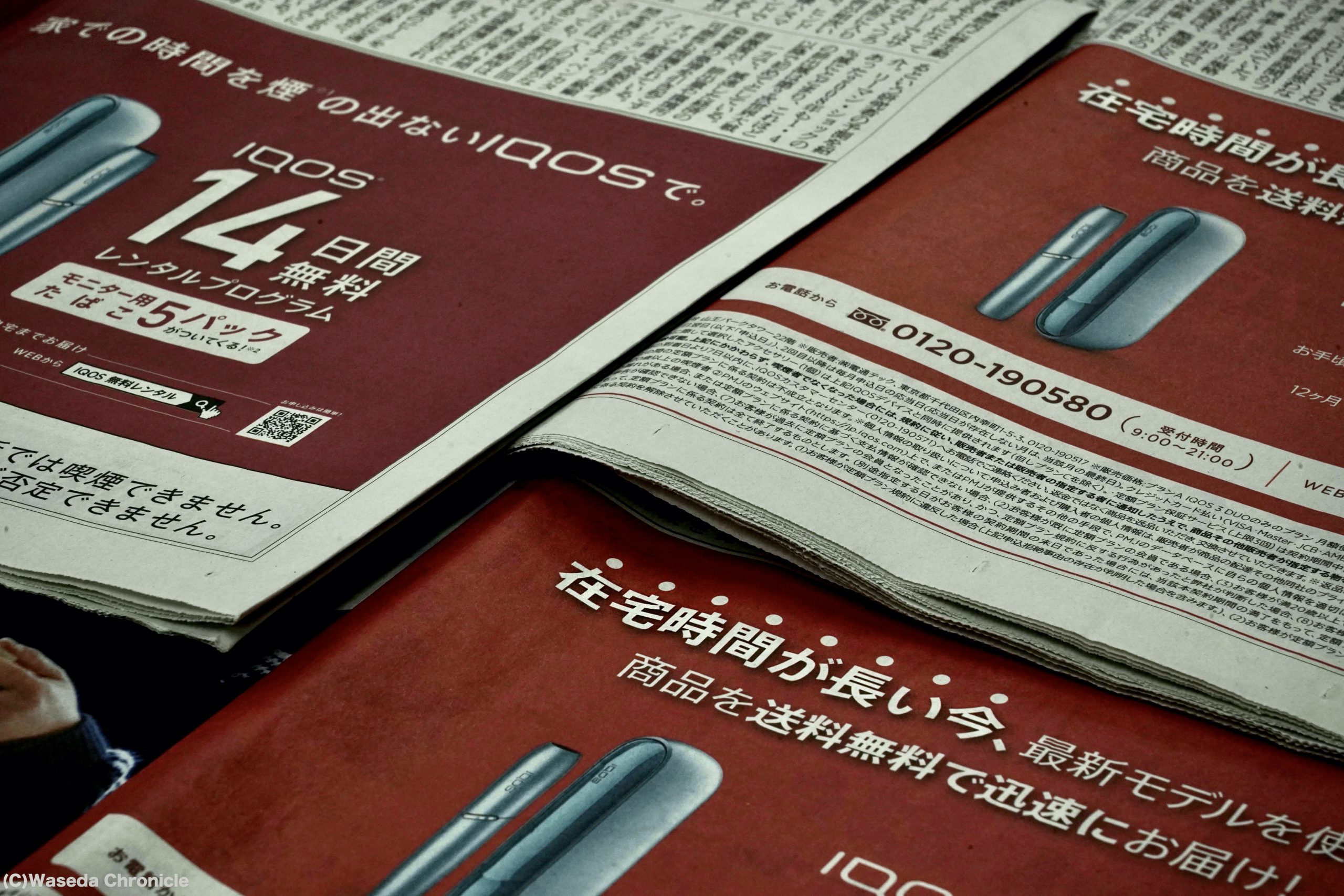 An IQOS ad that appeared in The Asahi Shimbun newspaper as Covid-19 spread in Japan. It also offers a two-week IQOS free trial.

It was April 9, 2020, two days after Japan had declared a partial state of emergency to curb the spread of Covid-19. Osaka International Cancer Institute doctor Takahiro Tabuchi came across a surprising ad printed in The Asahi Shimbun newspaper.

As in much of the world, people in Japan were working from home and avoiding unnecessary outings to protect themselves from Covid-19. The ad’s wording, “spending more time at home,” was unmistakably in reference to the pandemic. But what exactly was being promoted?

It was IQOS, a heated tobacco product by industry giant Philip Morris (*1). The appeal of heated tobacco products, in which short tobacco sticks are inserted into an electronic holder, is centered on the reduced level of harmful emissions produced by heating rather than burning the tobacco. Other companies, including Japan Tobacco, sell similar products, but as of 2018 IQOS holds the greatest domestic market share at 71.8% (*2).

Since the product’s debut, Philip Morris has emphasized that IQOS reduces the emission of harmful and potentially harmful constituents by roughly 90% compared with cigarette smoke. These include carbon monoxide and acetaldehyde, which the World Health Organization has said should be reduced in cigarettes.

If heated tobacco products really are safer than convention cigarettes, it’s little wonder that Philip Morris is recommending IQOS. As Covid-19 cases multiplied in Japan, IQOS ads appeared in not only The Asahi Shimbun but also The Yomiuri Shimbun, the paper with the highest circulation in the country.

But according to Dr. Tabuchi, these IQOS ads are dangerous. 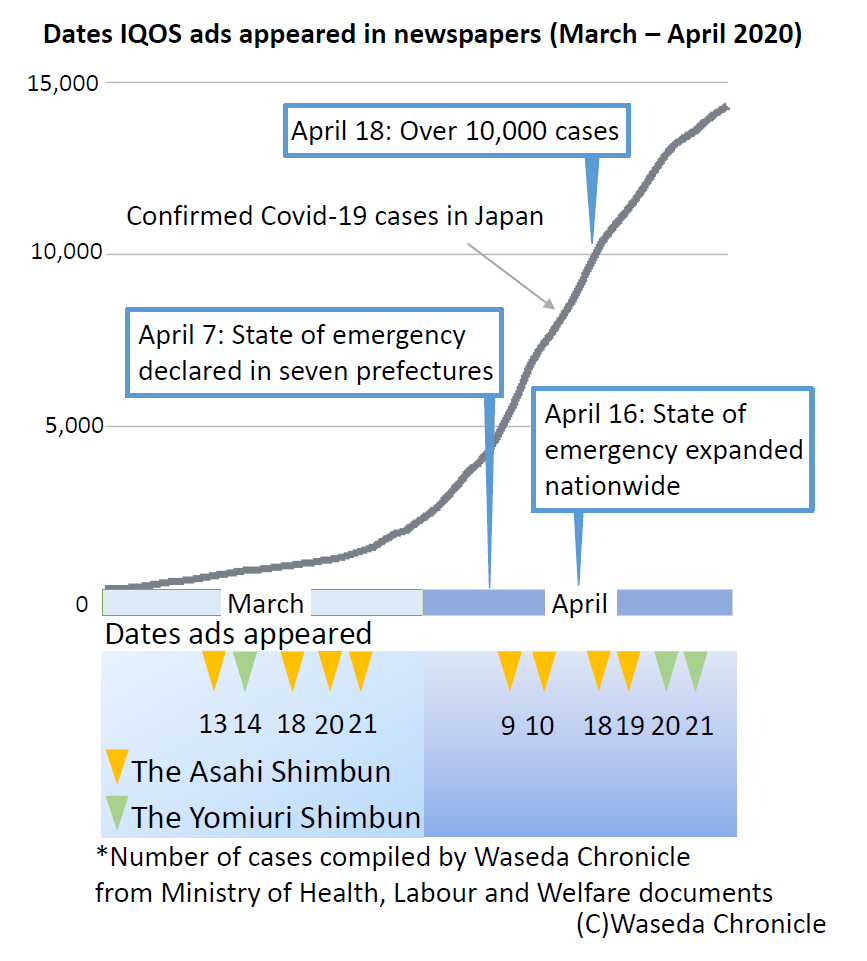 Warning from the Tokyo Medical Association

In 2019, the Tokyo Medical Association published a report titled “Tobacco Q&A: The latest information on smoking, second-hand smoke, and new tobacco products.” One of the questions the report responded to was “Is heated tobacco less harmful?”

“As heated tobacco products have only recently come on the market, it is unknown whether they are less harmful [than conventional cigarettes],” it stated. “Although one tobacco company advertises its product as ‘reducing harmful constituents by roughly 90%,’ there is no direct correlation between ‘the level of harmful constituents’ and ‘harmfulness.’

“Due to the extreme quantity of harmful constituents released by conventional cigarettes, even the remaining 10% presents a significant health risk, and it is not possible to say whether harmfulness (frequency of illness and death) has decreased.”

The tobacco company referenced in the answer was identified as Philip Morris in a footnote. In other words, although the company promotes its heated tobacco product as reducing harmful constituents by 90%, that figure is independent from the product’s potential adverse health effects.

“The credibility of the data produced by the tobacco company that says it has reduced harmful constituents by 90% has been repeatedly been called into question,” the report also noted. “A number of medical publications have identified a considerable amount of harmful constituents in the emissions from heated-not-burned tobacco products.” 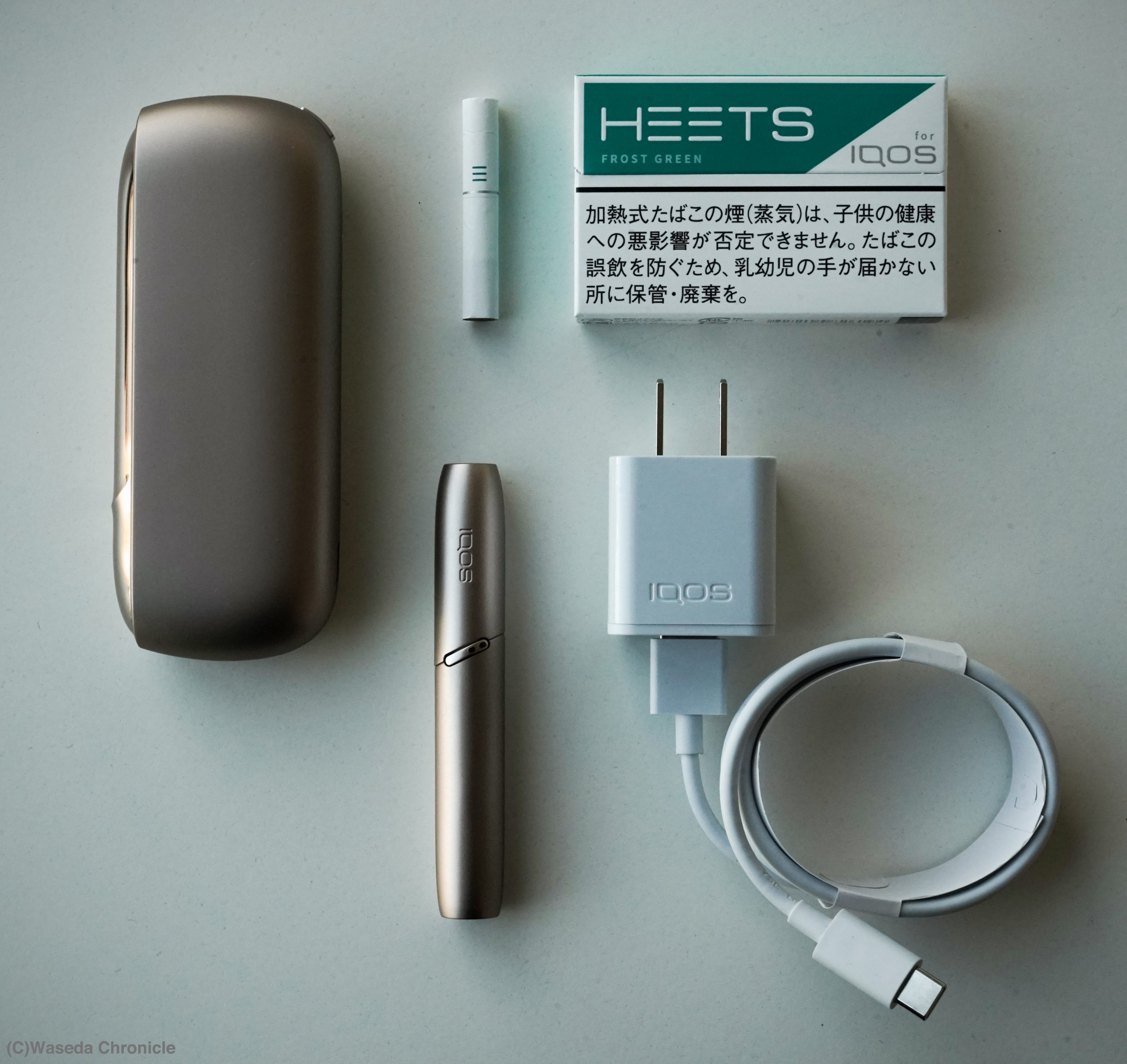 Heated tobacco products use electricity to heat the short tobacco sticks inserted into the device.

Why does Philip Morris emphasize IQOS’ reduction of harmful constituents? To make informed decisions, smokers need more than just a comparison — they need to know what impact the product could have on their health.

He explained: “Nicotine is what gives smokers a buzz and what makes cigarettes addictive. Cigarettes also include ammonia, which helps the body absorb more nicotine as it penetrates the lungs and brain.”

In the 1990s, it came to light that American tobacco companies were secretly adding ammonia to cigarettes in order to make them more addictive, thereby securing their customer base.

“But ammonia isn’t good with heat,” Muramatsu said. “In conventional cigarettes, which burn at roughly 900 degrees Celsius, the ammonia’s ability to increase nicotine absorption weakens. Heated tobacco products, which only get up to about 300 degrees, are a convenient solution.”

In that case, was IQOS — under the guise of a potentially less harmful product — meant to ensnare smokers all along?

Japanese doctors weren’t the only ones to raise issue with IQOS. Through our investigative partner OCCRP, we learned that health authorities in Italy had been equally critical.

In its own studies, Philip Morris concluded that IQOS presents less risk of harm compared with continued smoking. But in order to proclaim as much on the product’s packaging — which is allowed in Italy, unlike other parts of Europe — Philip Morris had to obtain permission from the Italian health authorities.

In December 2018, Philip Morris’ application to market IQOS as presenting less risk was rejected by Italy’s Ministry of Health following a review by the Italian National Institute of Health.

According to documents obtained by Rai 3, an Italian television channel and partner in this investigation, the institute evaluated Philip Morris’ application as follows: Philip Morris’ studies were designed to help its product sell, so it cannot be said that they truly examined IQOS’ health effects; studies must be conducted transparently and under appropriate conditions.

But “less risk” label or no, Philip Morris continues to sell IQOS around the world. According to the company’s data, over 8 million smokers worldwide have switched to IQOS from conventional cigarettes.

IQOS is doing particularly well in Japan. It caught on relatively quickly following its debut in 2014, with Japan comprising over 90% of the product’s global sales for a time (*3).

Now, as Japan adjusts to life with Covid-19, Philip Morris is on the offense, promoting IQOS through free trials and ads in newspapers. Is the company conscious of the threat its product poses to users, as well as those exposed to secondhand emissions, should they catch the virus?

On May 1, 2020, Tansa sent questions about IQOS’ potential adverse health effects in relation to Covid-19 to Philip Morris Japan.

“It is our understanding that the connection between smoking and Covid-19, including severity of symptoms, is not yet fully understood.

“As for your concerns about adverse health effects, please refer to information and guidance provided by trusted public health authorities, such as the WHO, FDA, and Japan’s Ministry of Health, Labour and Welfare.

“Philip Morris Japan does not consider it appropriate to comment on the connection between smoking and Covid-19. Thank you for your understanding.”

Together with our overseas partners, Tansa will continue to investigate and report on the safety of heated tobacco products.

*2: According to an article published by Reuters (in Japanese) on Feb. 7, 2019, shares of the Japanese heated tobacco product market were as follows: Philip Morris’ IQOS at 71.8%, British American Tobacco Japan’s glo at 20.1%, Japan Tobacco’s Ploom at 8.1%.

*3: An article published by weekly magazine Shukan Asahi on Dec. 30, 2016 quoted a Philip Morris Japan representative as saying that “IQOS is sold in 10 countries, including Italy, Switzerland, and Russia, but 98% percent of its sales are in Japan.”

(Originally published in Japanese on May 26, 2020. Translation by Annelise Giseburt.)

Next article
Blowing Unsmoke: All articles