Japan’s National Police Agency aimed to build a suspect DNA database to rival those of the West, some of which contained over one million profiles.

It was no secret that the Japan Federation of Bar Associations and the police had opposing stances when it came to expanding the database. The lawyers favored a prudent approach, the police swift action.

The police clearly indicated their intention to expand the DNA database at meetings of the “Study Group for Enhancing Investigation Methods and Interrogation,” active from 2010 to 2012 and which was led by the chairperson of the National Public Safety Commission (*1).

The NPA explained the following at a study group meeting held on June 21, 2011.

・ Police will not use genetic information related to physical characteristics or illnesses when they examine DNA profiles.

・ With current technology, the chances of two individuals being found to have the same DNA profile is one in 4.7 trillion.

・ A suspect DNA database is necessary for criminal investigations; only DNA collected during investigations is registered to the database.

According to a study group member, the meeting even included a demonstration of how DNA is collected by rubbing a cotton swab on the inside of the cheek. The demonstration emphasized that collection is painless and that the police follow proper procedures to obtain the suspect’s consent.

JFBA: “Delete DNA if suspect is not prosecuted”

Lawyers from the JFBA, including Hisashi Kosakai, participated in the study group to ensure that suspects’ rights were protected. The police’s plan for the DNA database troubled the lawyers.

“Even if other countries register a large number of profiles to their DNA database, legislation imposes limitations, such as by mandating that DNA is deleted in the event of a non-prosecution,” Kosakai said. “There is a real danger that Japan’s database could be used arbitrarily because it is not bound by any such law, only by National Public Safety Commission regulations.”

In Germany, for example, DNA profiles are deleted at the conclusion of an investigation, with the exception of felonies like murder. At study group meetings, JFBA lawyers emphasized the following points as they advocated for the legislation of Japan’s database.

・ The DNA database should be operated within a set legal framework.

・ A warrant should be necessary for DNA collection.

・ Only DNA from sex offenders and suspects of serious crimes, such as robbery and murder, should be registered to the database.

・ A suspect’s DNA should be deleted from the database if they are acquitted or not prosecuted.

・ The database should be managed by a third-party organization, and the counsel for defense should also be able to access it.

Former directors of the NPA’s Criminal Affairs Bureau and the Tokyo Metropolitan Police Department’s First Criminal Investigation Division (which handles homicide cases) also participated in the study group. Debate between those who investigate suspects and those who defend them never reached a conclusion. The study group’s final report, released on February 8, 2012, listed a number of areas that required “further consideration.” The only concrete decision made was to “significantly expanded the DNA database.”

But the most important point for further consideration — legislation — would never be realized. 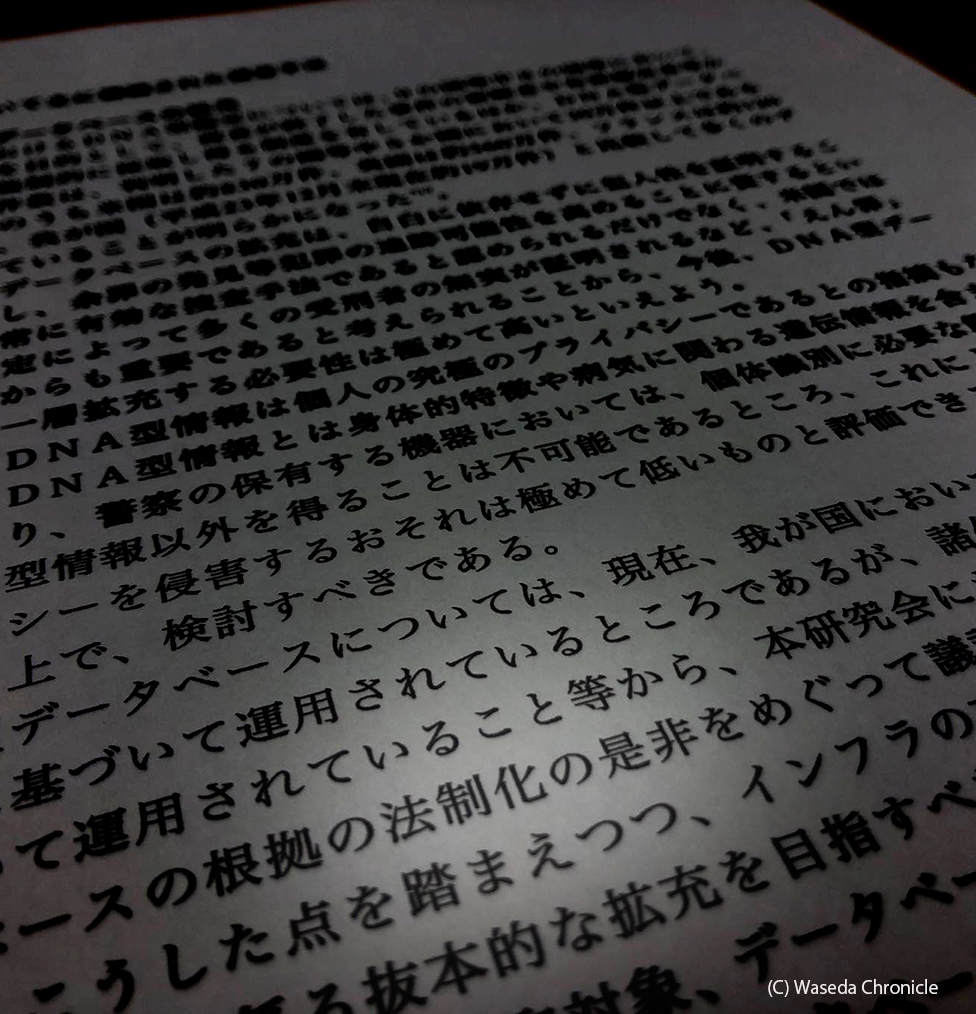 The final report by the “Study Group for Enhancing Investigation Methods and Interrogation” (February 2012) notes discussion surrounding the pros and cons of legislating the DNA database. (C)Tansa

The NPA “did not believe legislation necessary”

Ten months after the study group released its final report, Kosakai again confronted the NPA about its DNA database at a December 25, 2012 meeting of the Ministry of Justice’s “Special Subcommittee on the Criminal Justice System for a New Era.”

Kosakai was concerned that although the study group’s final report had mentioned considering legislation regarding the DNA database, the NPA had taken no action for the better part of a year.

“In the study group, even members of the police originally worked under the assumption that the DNA database would be legislated, but it seems that intent has disappeared. However, I still firmly believe that this issue should be clarified by law,” Kosakai said to Satoru Shimane, then director of the NPA’s Criminal Affairs Planning Division (*2).

“At present, we do not believe specific legislation is necessary,” Shimane replied. “We consider the management and retention [of DNA] as permissible within the reasonable scope set forth in the Act on the Protection of Personal Information.”

The police had renounced any plan to create a legal framework for their DNA database.

And in fact, an NPA directive released three months earlier was already accelerating its expansion.

(Originally published in Japanese on Nov. 16, 2019. Translation by Annelise Giseburt.)

*2: Legislative Council of the Ministry of Justice, “Minutes from the 17th meeting of the Special Subcommittee on the Criminal Justice System for a New Era,” December 25, 2012.