520-million-yen embezzlement not reported to police

A clinical trial found that anticancer drug Xeloda dramatically reduces the risk of recurrence in breast cancer patients. But when we examined internal accounting documents related to the trial, we found that it had been funded by Chugai Pharmaceutical, Xeloda’s manufacturer and distributor. Chugai funneled the money — we have confirmed the transfer of 134 million yen (about $1.22 million) — through a nonprofit called the Advanced Clinical Research Organization.

ACRO’s officially registered address is in Saitama Prefecture. But when we tried to visit, we found only an empty, dormant building. Its website had been shut down as well.

What was going on? An incident that took place 11 years ago gave us a hint as to the nature of this organization.

We are in possession of a document that ACRO submitted to a department of the Tokyo Metropolitan Government’s Bureau of Citizens and Cultural Affairs. The department oversees NPOs in its jurisdiction.

Titled “Full report,” the document explains that an agent consigned with ACRO’s accounting had embezzled money from the nonprofit. It was dated June 9, 2009 and was stamped as having been received by the department 10 days later, on June 19.

・Embezzlement by an agent consigned with ACRO’s accounting was discovered on March 11, 2009.

・The agent used the embezzled money to finance their own business.

・ACRO instituted prevention measures and explained to its affiliates what had happened, as well as apologized and requested continued cooperation.

・ACRO was prioritizing obtaining maximum compensation for damages, but it also hadn’t ruled out filing charges against the embezzler.

The majority of the 520 million yen embezzled from ACRO had been comprised of donations from pharmaceutical companies. ACRO had even considered filing charges.

But according to someone familiar with the organization, ACRO never reported the embezzlement to the police. 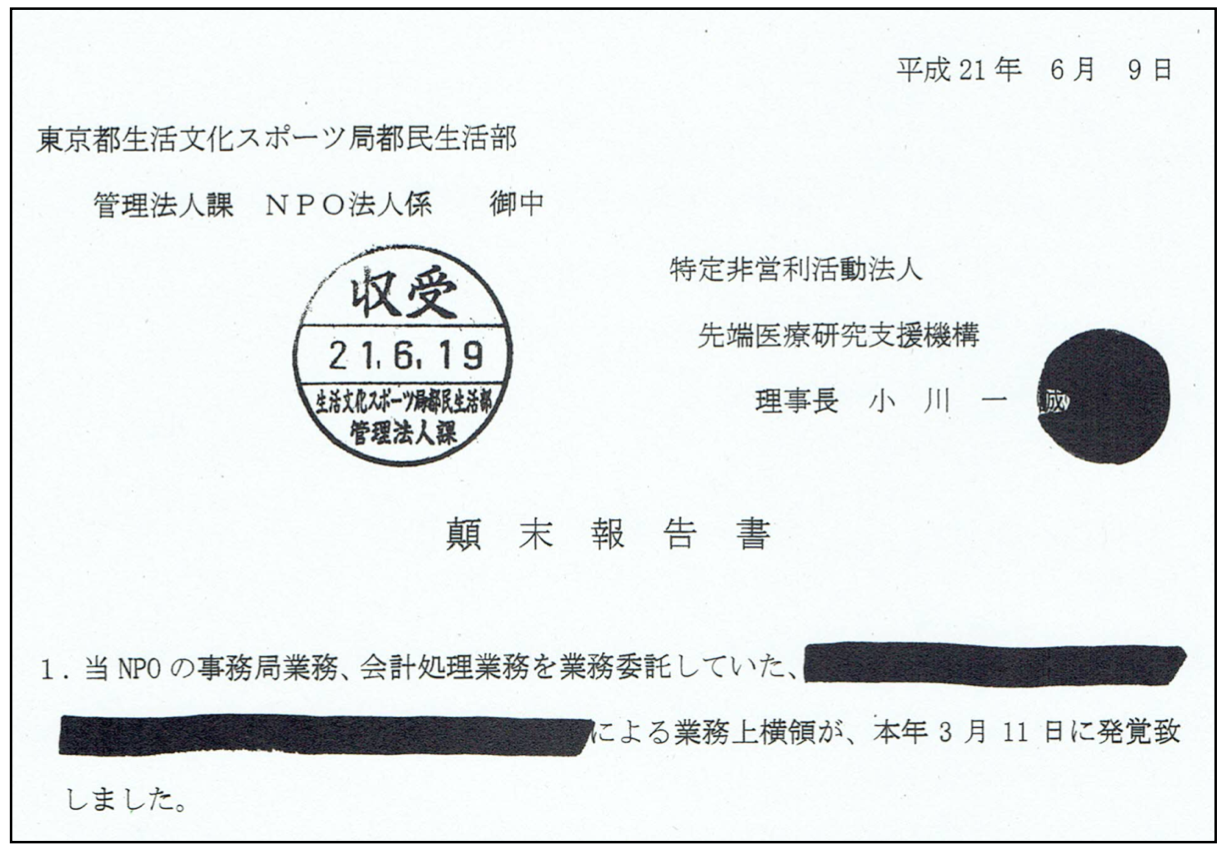 The report ACRO submitted to the Tokyo metropolitan government

“It would spill the beans”

“The pharmaceutical companies making donations learned of the embezzlement too, of course, but a police investigation would spill the beans that their donations had been earmarked for specific clinical trials. The companies were afraid of that, so ACRO didn’t file charges either.”

ACRO submitted its report on the embezzlement to the Tokyo metropolitan government in 2009, a year that happens to fall right in the middle of the clinical trial of Chugai Pharmaceutical’s anticancer drug Xeloda.

ACRO and the pharmaceutical companies made sure the police didn’t discover their scheme of passing so-called donations on to clinical trials. That’s why the nonprofit refrained from filing charges, despite being relieved of hundreds of millions of yen.

We suspected that ACRO had originally been established as a front to conceal the financial ties between pharmaceutical companies and clinical trials.

In Tokyo’s Shibuya neighborhood, we were able to meet with someone familiar with ACRO since its inception.