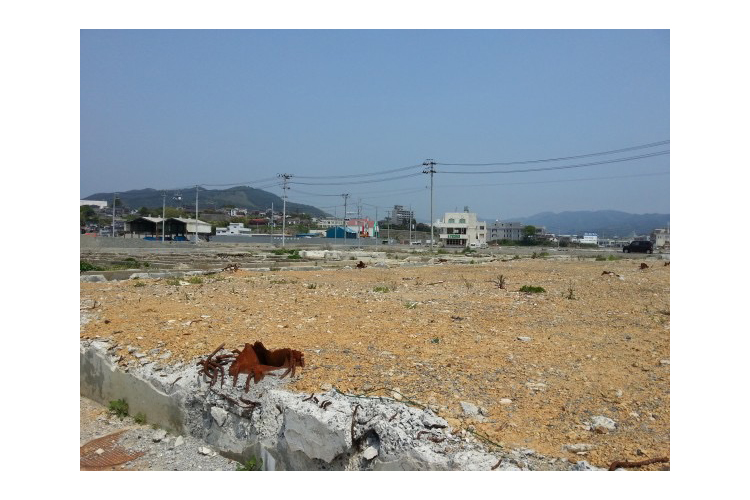 In May 2013, I visited Kesennuma, Miyagi Prefecture.

Even in residential areas two kilometers away from the port, concrete foundations were left as if the tsunami had washed away everything only yesterday. The buildings that had managed to stay put had a line, way above my head, that still showed the tsunami’s high-water mark. The ocean’s scent lingered in the ruined houses.

During my three-day stay, I met a lot of young people. A middle school student who resigned themself to death when a fire approached at an evacuation site. A high school student who started to share her experience of the disaster as a kataribe (storyteller). A university student, originally from Kesennuma, who no longer eats local seafood because they are afraid of radioactive substances.

A high school student came up to me, saying “Can you hear me out?”

“Reporters from broadcast companies in Tokyo often come and visit this shelter. They ask me ‘Could you introduce me to the most pitiful friend of yours?’ This happens all the time.”

Do we need the kind of reporter who asks to be introduced to a student’s “most pitiful friend”? I didn’t think the real situation of the disaster-stricken area could be portrayed through these interviews. In fact, I was furious.

But fury alone won’t change anything. I decided to start a project where I could portray the real situation without the media’s filters, because there is no need for the media if we can see it with our own eyes.

In those days, there were many volunteer activities and study tours to disaster-affected Tohoku. However, I thought there should be more lighthearted reasons to visit the area, so I organized a music festival.

I held three events in Tohoku within four years. Artists, from local high school students to professional jazz or rock bands, performed, and 300 people gathered from around the country to attend the concerts.

After I graduated university, I worked at an international NGO called Ashoka for three years. It’s an organization that supports social entrepreneurs who try to address the roots of social problems across various areas, including human rights, the environment, education, and healthcare.

Through this work, interacting with people from over 90 countries was an everyday occurrence. It made me realize something: There are many people in Japan who give up on fixing injustice or inequality, saying “We can’t do anything about it” or “That’s just how society is.”

I believe that the media has the responsibility and the power to fight social apathy, especially in our society: to pick up the voices of ordinary citizens, to advocate for them using the tools of our trade, and to spark change. However, Japanese media does not fight. In fact, they don’t even give enough support to those who raise their voices.

I decided to quit my job at Ashoka and go to the U.S. to study journalism.

However, right after I received my acceptance letter in early 2020, I met Mr. Watanabe, the editor-in-chief of Tansa. He visited my work place, and we struck up a conversation.

Watanabe told me that the most effective way to change a situation is through overwhelming evidence. And he said Japan’s journalism is in danger of dying out. And that Tansa is regularly working with journalists overseas. Before I realized, it had already been two hours since we had started talking.

“Is studying abroad even necessary?” I asked myself while talking to Watanabe. Everything I wanted to learn in the U.S. and put into practice was already being done at Tansa.

Instinctually, I thought, “This is perfect — Japan already has a journalism organization that tries to uncover the truth and help those who are suffering.”

After that I met up with the members of Tansa numerous times. Mr. Aragane, then head of finance, said that “These people have fun working on topics that others do not have the time and energy to work on.” A reporter named Roberto mentioned, “Everybody, including me, is here because we all want to be here. It’s a totally different atmosphere.”

Eventually, I realized that there was no “That’s just how society is” at Tansa.

Although I was excited about my study abroad in the U.S., I declined. I decided to become an investigative journalist at Tansa.

I’m sure choosing Tansa will be a turning point in my life, just like Kesennuma.

(Originally published in Japanese on May 17, 2020. Translation by Ayaka Ono.)