The camellia and the cherry 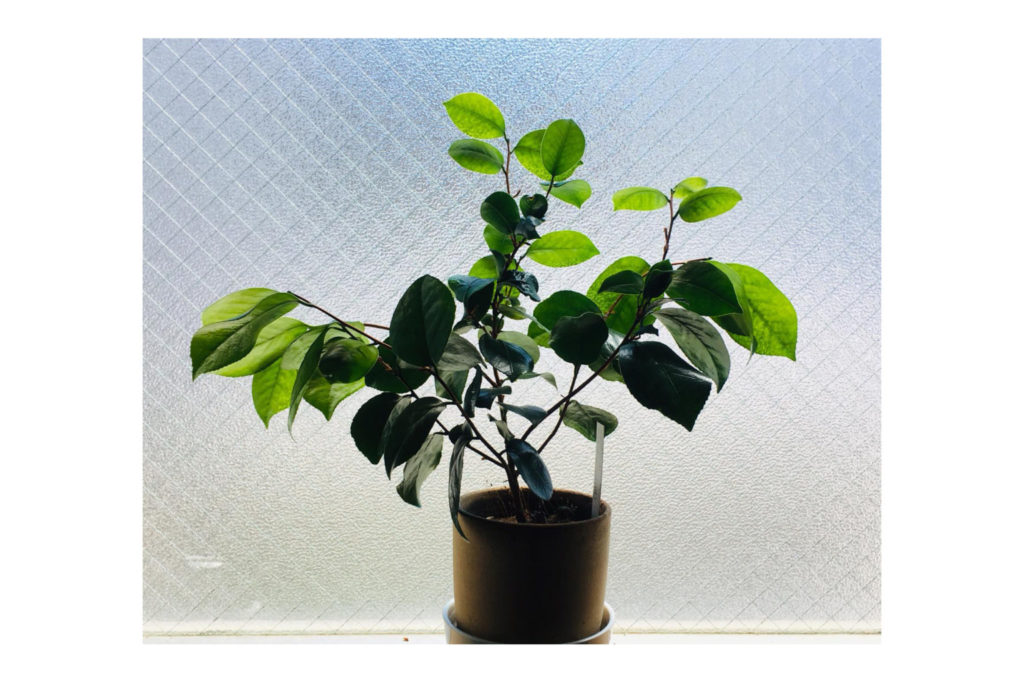 When I first received it three years ago — a goodbye present from a former job — the camellia was just a spindly little thing, with no more than eight leaves stuck to its single, twig-like trunk. After about a year, it put out its first branch. Then, the following spring, suddenly another five burst forth in the span of just a few weeks. It must have been preparing them all winter.

At first, I kept the camellia on my windowsill. In time, it managed to press some of its leaves flat against the glass, trying to soak up as much sunlight as possible. Following its growth spurt, the camellia’s pot was clearly too small, but I kept putting off replanting it.

“It’ll be a pain to carry a big pot when I move to Tokyo,” I thought, guiltily pretending I didn’t see the roots poking out of the bottom.

In fact, this isn’t just any camellia: Its “mother” survived the atomic bombing of Hiroshima. That makes my sapling a second-generation survivor tree. But although I lived in Hiroshima for a few more years after receiving the camellia, I never paid its mother a visit, or even checked where she might be. I decided it was past time to do so.

There’s a label stuck in the camellia’s pot: “A-bombed camellia, W14b29-01.” The number contains information about the mother tree — “W14” for 1,400 meters west of ground zero, “b” meaning that it’s been replanted, “29-01” for its location and number of survivor trees at that site.

But the label was wrong. When I cross-checked it against a database compiled by Hiroshima City, “W14b29-01” was a jujube, not a camellia. I visited the tree’s location, on the green belt that sandwiches Peace Boulevard, to double check. Yes, the jujube’s leaves were totally different from my camellia. I consulted the city’s database again, this time for A-bombed camellia japonica. Luckily, there was only one.

It grows at Yoshijima Inari Shrine in Hiroshima City’s Naka Ward, 2,160 meters from ground zero. The shrine wasn’t large, but its grounds contained another three survivor trees in addition to the camellia: a sinewy hackberry, an elegant pine, and a stately camphor.

According to the city’s database, these trees protected the shrine building from the atomic bomb’s blast, and injured were treated on the shrine grounds in the following days.

Curious to learn more about the mother camellia, I emailed an arborist who has taken care of Hiroshima’s survivor trees for many years. He told me that the camellia was about 120 years old, and that it had been purchased by the shrine from a gardener in Koimachi, on the western side of Hiroshima city.

Although I had hoped to speak with someone at the shrine as well, the facilities were smaller than I expected and deserted. But I spotted the camellia right away, next to the stone gate that marks the entrance to the shrine. 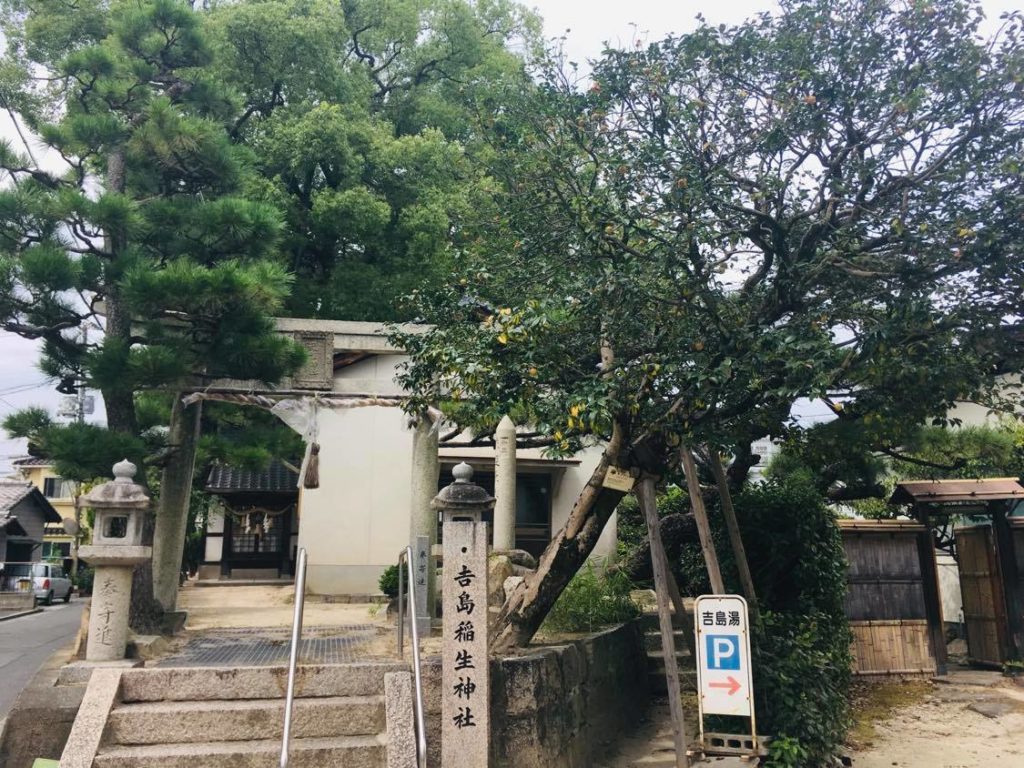 The A-bombed camellia hangs over a sign pointing to parking for a local public bath.

It leaned northward at a steep angle, and there were scars near its base where parts of the trunk had rotted away. Propped up by a few wooden posts, the tree looked rather like it was using canes to support a bad leg.

But it’s impossible to say for sure whether these features are effects of the atomic bomb. The arborist had also told me of another potential effect from radiation: a mottled pattern on the camellia’s leaves. Yes, I could see splotches of yellow. (My sapling also exhibits some speckles, but I don’t know whether it’s genetic or whether I just don’t give it enough plant food.)

Despite the tilting trunk and splotchy leaves, the camellia’s branches were full of fruit. A mother tree indeed.

Hiroshima’s survivor trees mean various things to various people. Many hibakusha (A-bomb survivors) have spoken about finding hope in the fresh green shoots that grew from charred trunks in the bombed-out city. “Maybe I can go on living too,” they thought. And for years, Hiroshima City and civil society groups have sent second-generation seeds and saplings around the world as symbols of peace.

But for me, these trees have yet another meaning: trust and patience. During my first years in Hiroshima, I translated a book about survivor trees, which contains a story that has stuck with me since.

The author and the arborist — yes, the same one mentioned above — watch over a sick cherry tree that had survived the atomic bombing. The author, certainly not an old tree hand, wants to give the ailing cherry water on hot days and, when the arborist does treat the tree, seeks assurance that it will soon recover. Of course, no such assurances can be given.

After a year, she at last is able to think about the cherry, and even its eventual death, with peace of mind.

The arborist had taught me that you can’t rush trees, that you have to take your time. There was a question I had been wanting to ask him once I was a little more familiar with trees myself. At long last, I thought it was time.

“What is it about them that captivates you?”

He thought for a moment, then replied, choosing his words carefully.

“The more I work with trees, the more I learn. Each day brings new discoveries, and many times I have felt the joy of suddenly seeing or understanding something I had missed until then. I could never say, ‘I know everything about trees.’”

My camellia, now happily putting out new leaves from (at last!) a larger pot in Tokyo, reminds me to take my time. 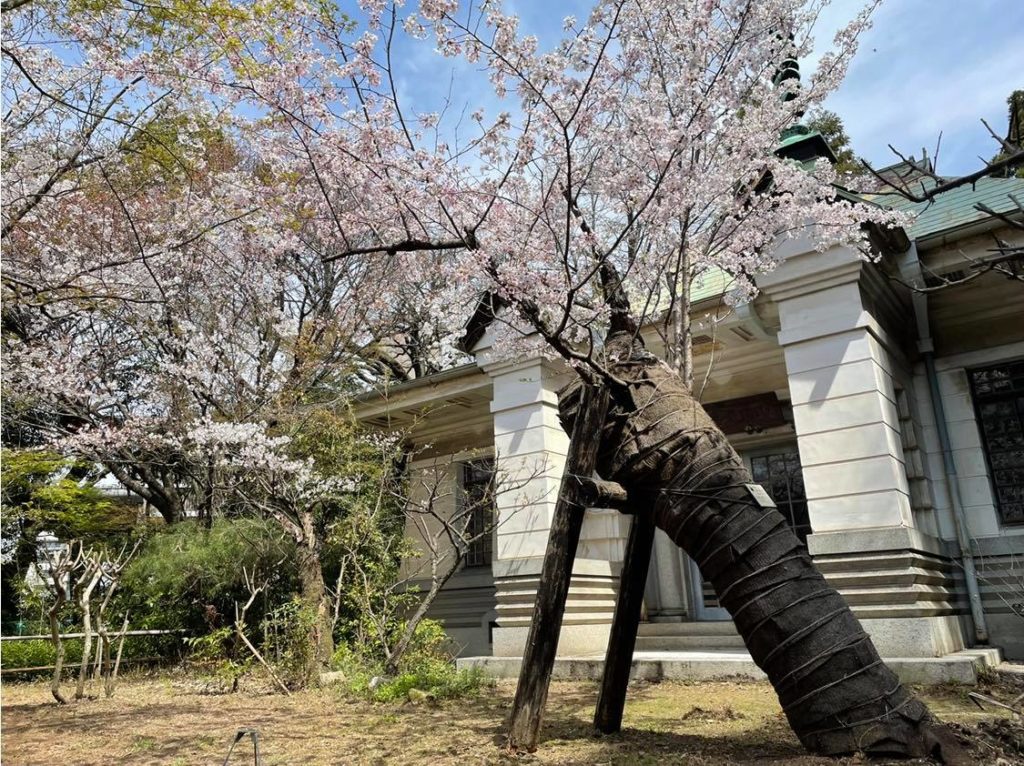 Previous article
Through Our Eyes: All articles