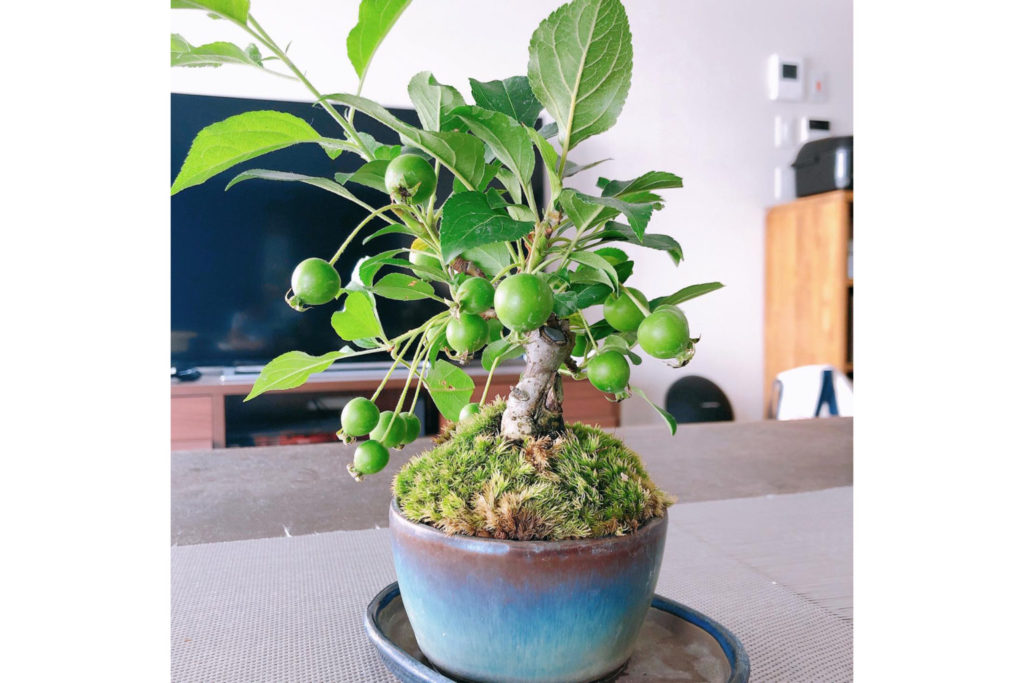 I bought a bonsai the other day. I don’t know if it was due to wanting some change in my surroundings since I’m spending much more time at home, but there sits a new arrangement to my room.

I considered buying a painting, but I decided to go for a bonsai because I wanted a glimpse of the four seasons to brighten up my room. I wasn’t too confident on growing a real bonsai, thus my hands reached for a modest crabapple. I thought it was the adorable fruit that caught my eye, but the real reason I bought the bonsai might have been my grandpa.

My grandpa loved to grow bonsai azaleas. He would line up his pots in the yard and spend most of the day outside. Even when he grew thin and lost some hair, I remember his delicate figure moving around the heavy pots with surprising strength and, shouldering a big tank of weed killer, making sure every inch of the yard was safe for his plants.

Long ago, out shopping with my grandpa, I recall pointing to an azalea by the roadside and saying that it was the same as the ones in his yard. “That’s an azalea. The ones at home are satsuki azaleas. The two are completely different,” he replied, shortly. My grandpa wasn’t one for excess words.

Even when I would hang around watching him take care of the bonsai, he didn’t say a word and continued working. Even if I told him “The bath is ready” or “It’s dinner time,” I would only receive a one-word reply, “Mmh.” I sometimes gave him a “Mmh” in return, but my grandpa only smiled silently.

There was no conversation while we ate, with the TV blasting in the background. Grandpa loved historical dramas, and when we watched them together, he would sip his tea with a smile.

Although grandpa was a quiet person, there was one incident where he gave out a yell. He was in the hospital, practically on death’s door and barely conscious. But he suddenly sat upright and grabbed both of my wrists. “I’m sorry. I’m sorry to leave you by yourself,” he wailed.

Come to think of it, it was more of a groan rather than a wail. As if he was getting out his final thoughts. At the time, I didn’t know what was going on, and I leaped backwards in fright. I still remember that my grandma tucked me into bed that night, telling me it was all going to be alright.

When grandpa’s funeral had finished and life was back to normal, grandma told me the full story.

I remembered this story when I saw an azalea by the side of the road this spring. My grandpa, who would only say “mmh” for everything, from “good morning” to “thank you” to “see you soon.” I can still hear that faint sound in my mind, warm and familiar.

I received a message from the friend who sold me the crabapple.

“Kyosuke, a crabapple won’t bear fruit by its own pollen. You need another bonsai to do that. If you want to see fruit again next year, please buy another one. Thanks again!”

(Originally published in Japanese on June 30, 2020. Translation by Ayaka Ono.)