Despite legislation, only 3.8% of Japan’s sterilization victims have received remediation

Saburo Kita was sterilized in Miyagi Prefecture at age 14, without explanation and without his consent.

On April 24, 2019, the Japanese Diet enacted new legislation granting 3.2 million yen (about $28,000) in remediation to all individuals sterilized in the country’s postwar sterilization program.

But two years on, only 945 of the roughly 25,000 sterilized individuals recognized by the state have received the payment — 3.8%. It is believed that roughly 16,500 of the 25,000 individuals were sterilized without their consent.

Responsibility for providing remediation lies mainly with Japan’s prefectural governments. However, in response to questions from Tansa, almost all of Japan’s 47 prefectures said they hadn’t informed individual victims or their families that they were entitled to compensation. These prefectures didn’t even maintain a record of the number of surviving victims. As a result, remediation has barely gotten off the ground.

The legislation specifies that victims have five years during which they are eligible to apply for the payment — until April 2024. About half of that time has already passed.

Enacted by a bipartisan legislative assembly, the 2019 law included an official apology to victims and stipulated that they were eligible to receive a one-time payment of 3.2 million yen (about $28,000) as remediation. Only sterilized individual themselves are allowed to apply for the payment.

However, some victims aren’t even aware that they were sterilized.

For example, some individuals with severe mental illnesses or intellectual disabilities underwent sterilization surgery after their parents had agreed to it; the individuals themselves didn’t know what was happening. Under the former Eugenic Protection Law (1948–1996), the Ministry of Health and Welfare issued a notice stating that individuals could be tricked into surgery if it was thought necessary. In some of these cases, victims were never told what had happened.

It’s also possible that even if an individual is aware they were sterilized, they might still not know they can receive remediation under the 2019 law.

But despite these circumstances, the majority of prefectural governments have not directly contacted victims or their families. In general, dissemination has been limited to posters in elderly care facilities and a notice regarding remediation located toward the bottom of the health ministry’s website.

In response to our questions, a number of prefectural governments told Tansa that they had not contacted individual victims “to protect their privacy.” The prefectures’ inaction is based on a directive from the health ministry, which requested that prefectural governments “be aware that some victims have never told their family or don’t wish to remember what happened to them.”

Based on the responses to our questions, Tansa learned that, aside from Yamagata, Gifu, Hyogo, and Tottori prefectures, 43 of Japan’s 47 prefectural governments have not contacted individual victims.

All 43 of these prefectural governments had also failed to keep track of the number of surviving sterilization victims.

The following are the responses Tansa received from the top 10 prefectures that had performed the greatest number of sterilization surgeries.

Hokkaido conducted the most sterilization surgeries out of all Japan’s prefectures. It promoted forced sterilization through various activities such as publishing a booklet to commemorate its thousandth surgery. Records of 2,593 surgeries have been found, with the individual’s name known in about half those cases.

And yet, Hokkaido Prefecture has not contacted any of them. When asked, the person in charge repeated “for the same reason as the central government” — in other words, to protect victims’ privacy.

However, a few prefectures are proactively contacting victims. When Tansa mentioned this, the person in charge only replied, “Is that right? I’m not familiar with it.” 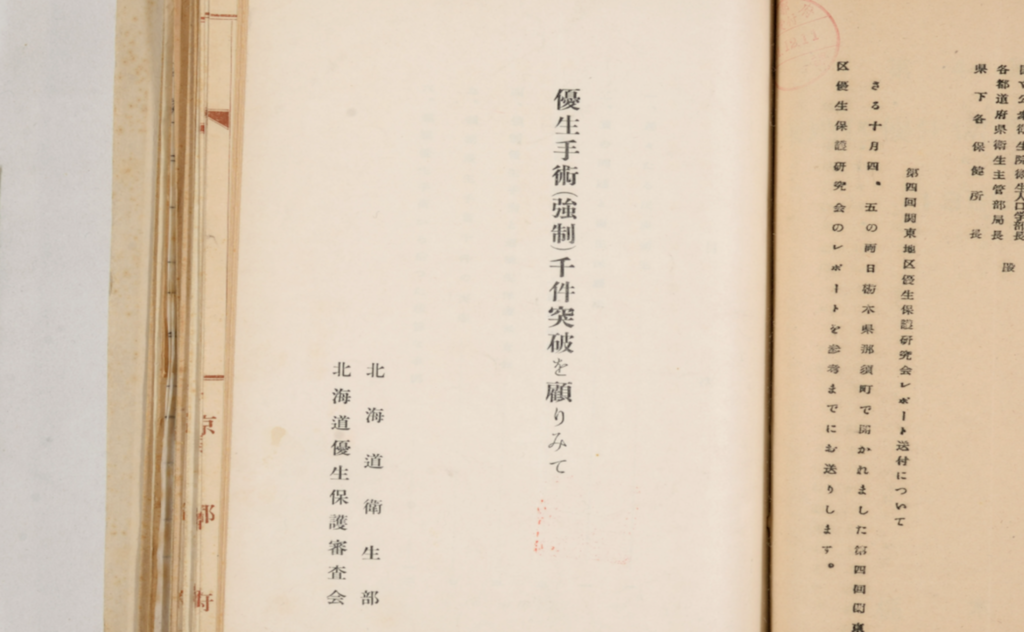 A commemorative pamphlet published in Hokkaido featured so-called “tragic cases” of individuals with genetic disorders or relatives with criminal records.

In most cases, family members helped victims apply for compensation

In Tottori, one of the four prefectures actively informing victims of their right to remediation, it was Governor Shinji Hirai’s decision to send out notices. He was of the opinion that the prefecture would still be able to protect victims’ privacy. The following is how Tottori Prefecture handled remediation.

Step 3: The prefecture and municipality discussed how best to notify the individual and their family.

As a result, all six surviving sterilization victims in Tottori were able to apply for and receive remediation.

Most were contacted via a family member, as many had a serious mental illness or intellectual disability that prevented the prefecture from being able to contact them directly.

In such cases, the prefecture consulted with members of the municipality and care facilities or hospitals that were familiar with the individual’s situation in order to determine which family member was best to approach.

If the prefecture wasn’t able to contact a family member, they would pass along a letter via a care facility employee and wait for the family to get in touch. As few employees were told about the matter as possible.

Yamagata Prefecture implemented a similar system after learning from Tottori and Hyogo prefectures, which had taken action earlier, and researching the issue in past news reporting.

Like Tottori, Yamagata Prefecture also found it difficult to directly contact many of the victims, so they reached out to care facilities and family members. According to the prefectural employee in charge, they didn’t receive any complaints regarding privacy from victims or their families.

“Things could get messy if we pick the wrong family member to contact,” they said, “So we proceeded quite carefully, with the cooperation of the municipality and care facility employees. Once we’ve done our part, it’s up to the individual and their family to decide whether they want to apply for the remediation payment.”

But prefectures proactively contacting victims are in the minority. How many individuals, sterilized by the state without their consent, will be able to receive remediation before the eligibility period ends two and a half years from now?

(Originally published in Japanese on Oct. 29, 2021. Translation by Annelise Giseburt.)