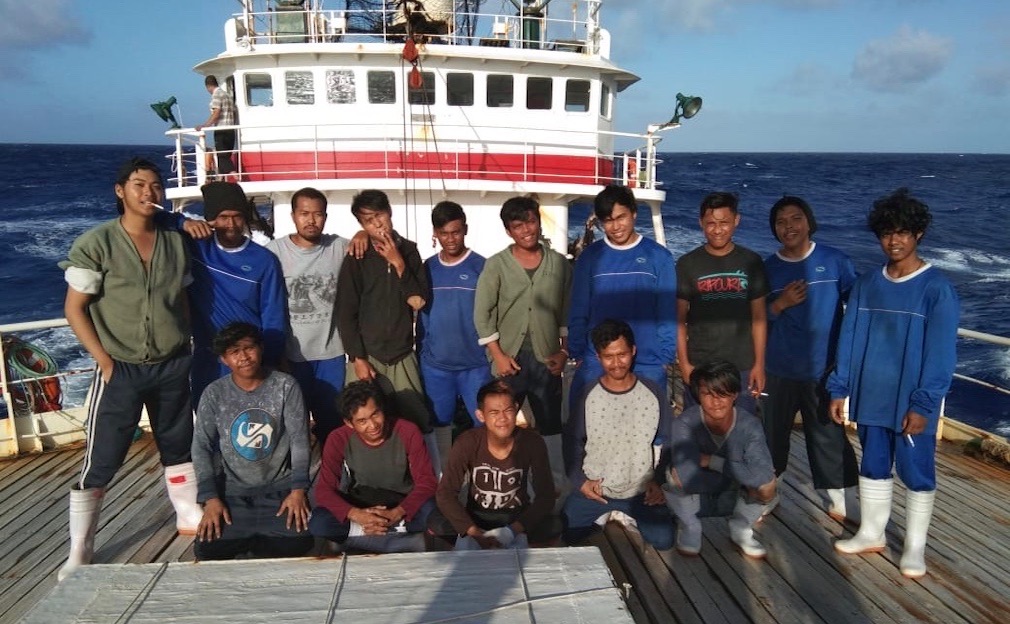 Who catches the tuna we eat here in Japan?

In 2019 and 2020 alone, at least 10 crew members from Chinese company Dalian Ocean Fishing (DOF)’s distant-water tuna fleet passed away, according to interviews with former crew conducted as part of an investigation by Tansa, Mongabay, and the Environmental Reporting Collective.

The majority of the deceased were young Indonesians, and the most common cause of death was illness left untreated. Punishing working hours and a lack of decent food and water defined crews’ time on board the DOF fleet. In Indonesia, manning agents who sent crew to work for DOF have been convicted of human trafficking and illegal recruitment.

Over the past 50 years, Japan’s distant-water longline tuna fleet has shrunk to roughly 20% its former number. But the country still consumes around 80% of the world’s sashimi-grade tuna — thanks now in part to foreign fleets like DOF.

This is the story of DOF’s deadliest vessel.

It was December 2019. After 10 months at sea, the Indonesian crew on board DOF tuna longliner Long Xing 629 had become close as family.

But their friends were fading before their eyes. The sickness started with a swelling of the legs that then spread up the rest of the body. It was painful to stand, painful to breathe.

Crew members asked the captain, one of eight Chinese on board, to head to port so that their sick friends could receive proper medical treatment. But the captain, making excuses and empty promises, refused to leave the Long Xing 629’s Pacific fishing grounds.

Bernardus Maturbongs (then 34), was particularly worried about one of his roommates, Sepri. Before falling ill, the 25-year-old from Serdang Menang, a village in Sumatra, had had an easy smile and a penchant for coffee and cigarettes. With few opportunities in his hometown, Sepri had been curious to try the relatively well-paying work on a foreign fishing fleet.

But the Long Xing 629 was far from the opportunity he had imagined.

“Sepri’s face turned pale, he had no appetite, he could only drink one tablespoon of water,” Bernardus remembers. Although Sepri had been given medicine, it didn’t seem to have any effect. Difficulty breathing kept him from sleep.

“The food wasn’t fit to eat; the water had a salty taste and smelled of rust. Our sick friend had to drink water like that, eat food like that.

“Sepri was like my own brother. I watched over him, I didn’t sleep.”

Around 6 a.m. on Dec. 21, 2019, Sepri’s roommates helped him to the bathroom. When they returned to their room Sepri fell unconscious and, within the hour, passed away.

“When he died, I cried so hard, it was unbearable,” Bernardus says. “I felt completely lost.”

At 9 p.m. that same day, Sepri was buried at sea, by order of the captain. Although crew tried to insist that his body be taken to shore, they knew going against orders could void their work contracts.

There was nothing they could do. 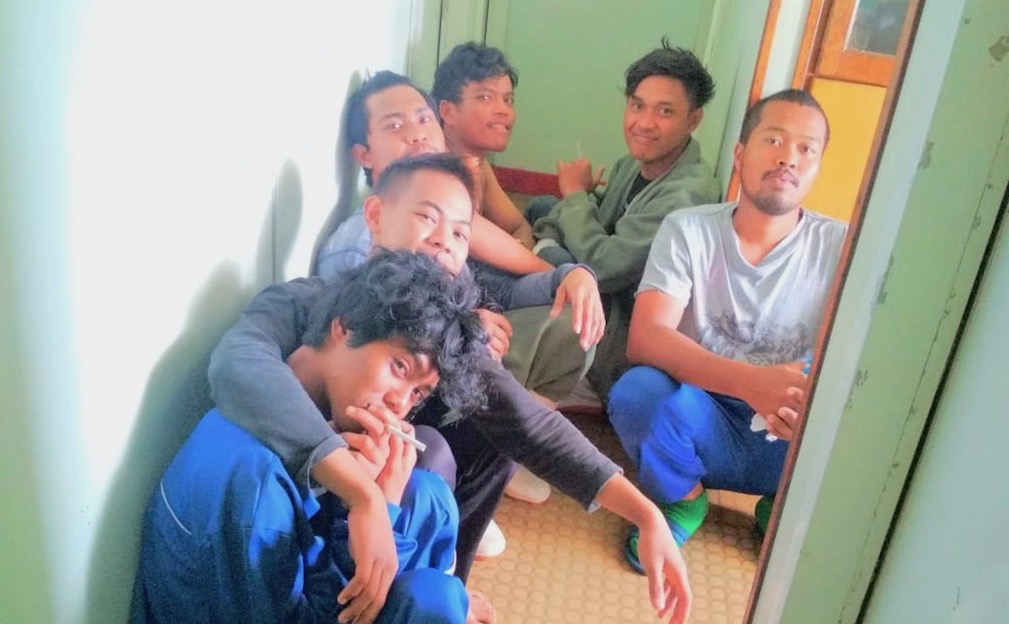 Six days after Sepri’s death, on Dec. 27, Muhamad Alfatah (then 19) and two other sick crew were transferred to another DOF vessel to be taken to shore.

It was too late — Alfatah passed away later that day. Like Sepri, he was buried at sea.

The Long Xing 629 remained in its Pacific fishing grounds near Samoa without once going to port. Although a few months passed without incident, by March 2020 crew were again falling ill with the same painful swelling.

Desperately worried, the crew demanded to be returned to shore and eventually threatened to mutiny. Finally, the captain decided that all the Indonesians were to be taken to Busan, South Korea, the same port they had originally departed from in February 2019. On March 27, 2020, the Long Xing 629’s Indonesian crew were transferred to another DOF vessel, the Tian Yu 8, which then made for Busan.

But it was once again too late, this time for sick crew member Ari (then 25), who passed away on March 29. At 7 a.m. the next day, Ari too was buried at sea. His casket, covered by a bright orange sheet, quickly sank into the deep blue water.

Ari’s friends remember him as quiet but said that when he did speak, he made people think. 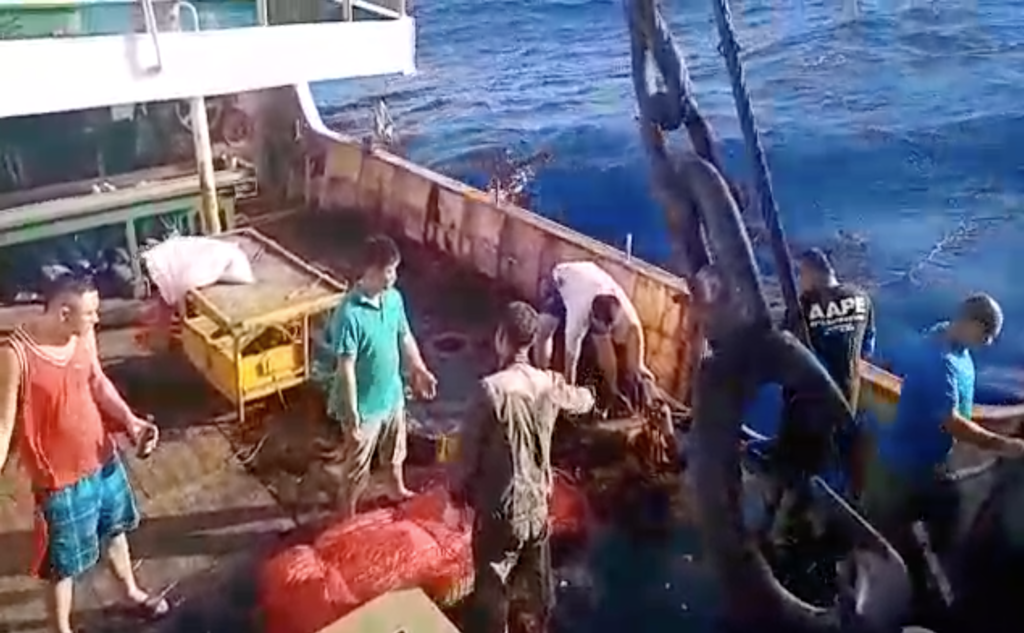 But returning to dry land wasn’t enough to save Effendi Pasaribu (then 21), who was admitted, coughing and feverish, to a Busan hospital on April 26. He passed away at 6 a.m. the next day.

Four deaths from among a single crew — what had happened on the Long Xing 629? 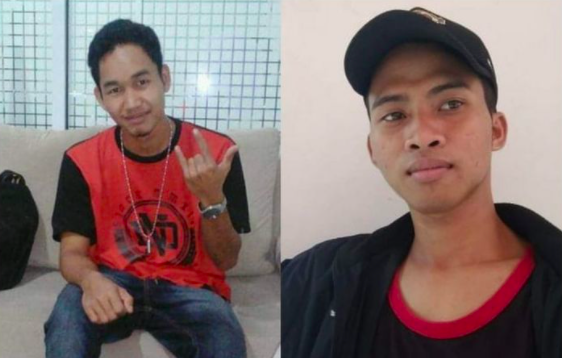 Sepri (left) and Ari both passed away on DOF's fleet and were buried at sea.

Over 24 hours of work

The average working time on the Long Xing 629 was 16 to 18 hours per day. There were virtually no days off, not even for religious holidays.

Work began at 2 a.m. First, a team of setters fitted the line — 300 buoys with 20 hooks each — with bait and threw it into the sea. When setting finished at 10 a.m., a team of haulers soon began pulling in the catch until 8 p.m. But, due to the limited number of crew, half the setters would also be part of the hauling team.

In addition to the continuous cycle of setting and hauling, crew also processed the tuna. The organs and gills were removed, then the tuna were washed clean of blood and put in the freezer. The line was prepped for the next setting.

Sometimes, there was more work than hours in the day.

“The most intense work was when there was a fish frenzy,” says Long Xing 629 crew member Rizky Fauzan Alvian (then 27).

“We started hauling at 10 a.m. but only finished at 4 p.m. the following day. Oh gosh, it was terrible. It was like the captain was hungry for fish; you gotta catch them all, nothing to be wasted.”

If the work was excessive, the food was deficient. The Indonesians were often fed expired food or bait fish intended for catching tuna. Although they were able to eat their fill of rice, according to a crew member, there sometimes weren’t enough side dishes to go around. They divided the meager portions to make sure everybody got a bite.

Although the Chinese crew drank bottled water, the Indonesians had to make do with distilled seawater, salty and smelling of rust. 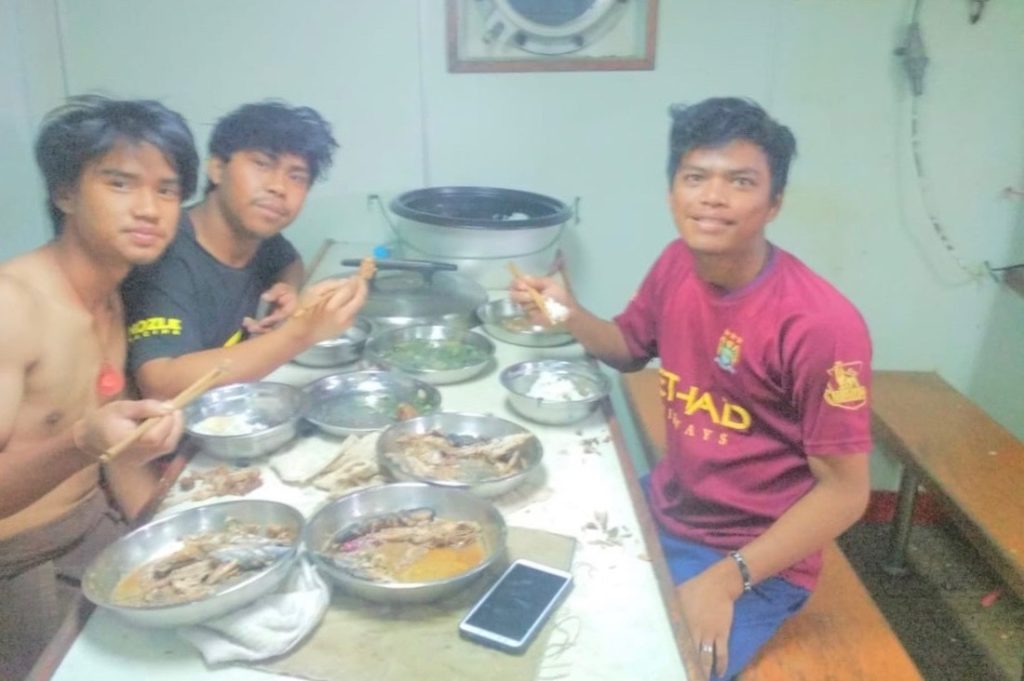 “If this weren’t water, I’d run away”

Most of the Long Xing 629’s Indonesian crew were first-time fishers, and in some cases their manning agencies hadn’t given them any training. In the first few months of work, this lack of experience triggered violent reactions from the ship’s deputy foreman.

Those who made mistakes or worked too slowly were hit — hard enough to leave bruises, but not so badly that they wouldn’t be able to work. None of the seven other Chinese crew intervened.

Rizky, who had previous experience working on a Taiwanese fishing vessel, did what he could to look out for the less-experienced crew.

One day during their first month at sea, Ari, who would pass away roughly a year later, got into a fight with the deputy foreman.

“He wanted them to work fast. So Ari was hit on the head; he hit back, and they fought,” Rizky says. “As a senior, I helped break up the fight. Because the working contract says that if you fight with the captain or others, it’s broken, and you go home with nothing.” 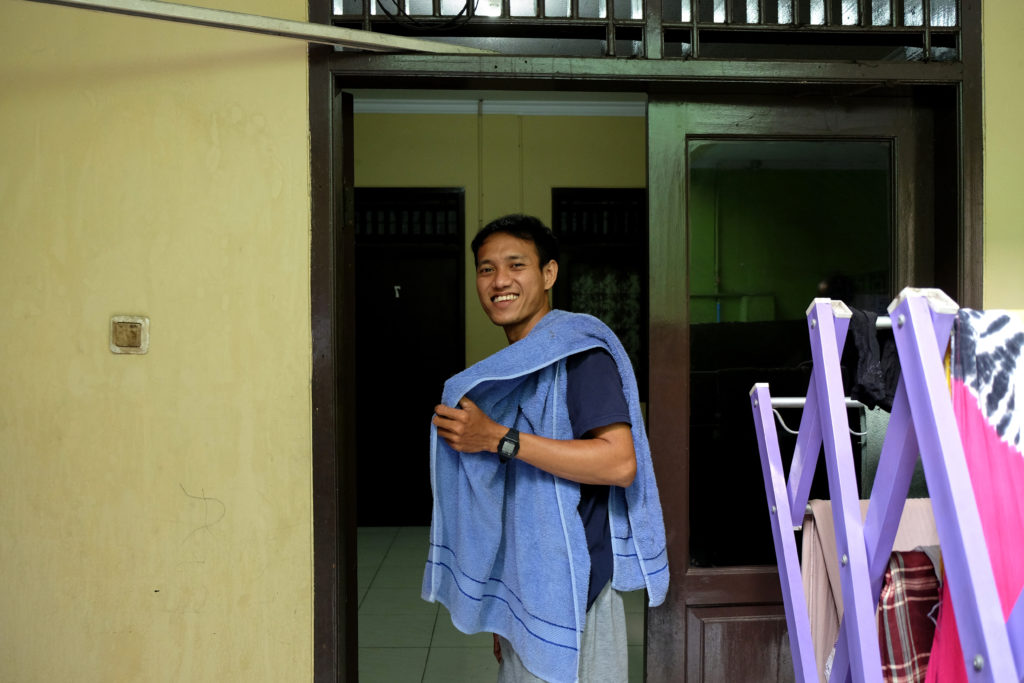 Rizky Fauzan, one of the former Long Xing 629 crew, getting ready for work as a cleaning service at a Covid-19 patient facility in East Jakarta. Photo taken on Aug. 18, 2021 by Wienda Parwitasari, Mongabay.

“Nobody could stand it on the Long Xing 629, and we wanted to go home,” Rizky recalls. “Everyone said, ‘If this weren’t water, I’d run away.’”

Normally, the Indonesian crew had no way to communicate with the outside world. But one day in fall 2019, a few of them managed to connect to the internet via a tanker that was refueling their vessel.

Nur (then 19) used the opportunity to message his mother, who he hadn’t been able to contact since leaving Indonesia in February. She responded immediately, asking how he was.

“I’m on a fishing boat,” Nur replied. Not wanting to worry her, he didn’t mention the long working hours, the abuse from senior crew, or the strange swelling beginning in his friends’ legs.

After a few minutes, the connection was lost.

“If you cancel, they’re gonna arrest you”

The Long Xing 629 crew had been sent to work for DOF by manning agencies in Indonesia. Although most crew had expressed interest in work at sea — after all, it paid more than work on land — when it came time to sign their contracts some felt they didn’t have a choice.

Nur was one of them.

After leaving home with five friends and staying in a manning agency mess for two months, in the second week of February 2019 Nur and his friends were brought to the agency’s office and, for the first time, presented with their work contracts.

Uncertain, Nur and his friends hesitated. But the agent urged them on.

“You already owe money for staying at the mess, for eating the food,” Nur says the agent told them. “The plane ticket’s already bought. If you don’t take this job, you’ll have to find a way to pay it all back.”

They all signed, whether they wanted to or not. That same day, they were taken to the airport, bound for Busan, South Korea, where the Long Xing 629 was waiting. 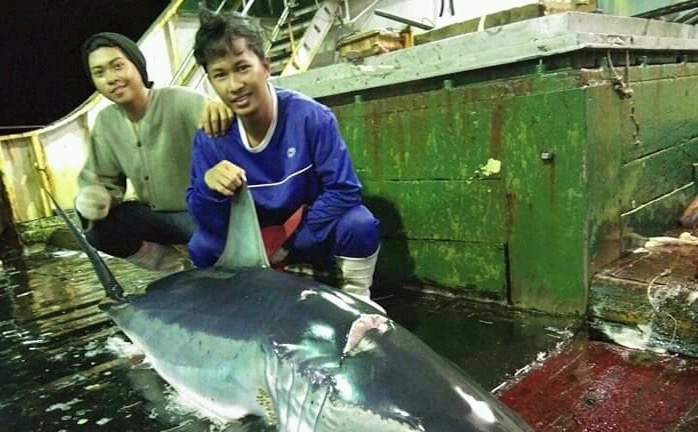 Bernardus, the crew member who looked after the ailing Sepri, has a similar story.

He was told by his manning agent to go to a departure mess, and only then was he shown his contract. The pay — $300 per month — was lower and the working hours longer than Bernardus had expected. But when he tried to negotiate, Bernardus was told that he would have to pay a penalty of 20 million rupiah (about $1,400) if he turned it down.

“The agent said he had already bought the ticket,” Bernardus remembers. “He said ‘If you cancel the ticket, the police are gonna come looking for you, they’re gonna arrest you.’”

From December 2020 to May 2021, five staff from three of the manning agencies that sent crew to the Long Xing 629 were convicted of either human trafficking or illegal recruitment and sentenced to prison time.

In addition to the four from the Long Xing 629, Tansa and Mongabay learned of six other deaths among DOF’s 35 vessels. DOF did not respond to Mongabay’s request for an interview.

Tuna caught by its fleet, including the Long Xing 629, entered Japan. It was purchased and distributed by Mitsubishi Corporation subsidiary Toyo Reizo, Japan’s largest tuna importer.

Next time, we’ll reveal the relationship between these two tuna giants.

“Death on Distant Water” is a collaborative investigation by Tansa, Mongabay, and the Environmental Reporting Collective. Interviews with former crew used in this article were conducted by Basten Gokkon of Mongabay, with additional reporting by Philip Jacobson and Taufik Wijaya of Mongabay.

Next article
Death on Distant Water: All articles