What if it turned out that newspaper articles about pharmaceutical products that could take or save a person’s life had been paid for?

In fact, they have been for years.

Our suspicions started to develop in March 2016.

It all started when we happened upon documents showing that 550,000 yen ($1 = 110 yen) traded hands over an article about blood thinners used to prevent stroke. According to the documents, the money was paid by a member company of Dentsu Group, a major advertising agency contracted by a pharmaceutical company. The money had gone to a subsidiary of Kyodo News, a news agency that provides articles for regional newspapers all over the country.

Blood thinners prevent coagulation of the blood. They are very effective, but can cause cerebral bleeding in some patients. Although no causal relationship has been firmly established, administering practitioners have reported hundreds of deaths to public agencies. Even pharmaceutical companies warn that the bleeding can lead to death if severe.

The article provided by Kyodo News was published in regional newspapers. There was no indication that the article was an advertisement or intended for PR purposes. It was presented as an ordinary news article.

On the Dentsu side were Dentsu and its 100% subsidiary Dentsu Public Relations (Dentsu PR).

On the Kyodo side were Kyodo News and its 100% subsidiary K.K. Kyodo News.

In response to our questions, a Dentsu PR employee who had been involved acknowledged the exchange of money, saying it was a payment for successful publication of the article. The Kyodo News senior staff writer who wrote the article said he was aware that the article was part of a business deal, acknowledging his awareness that money would be paid for the article.

It’s not just blood thinners. According to internal documents and testimony from people involved, money has been exchanged between Dentsu and Kyodo News for articles about pharmaceuticals since at least 2005. Internal documents acquired from Dentsu contain records of such transactions. The head of K.K. Kyodo’s medical information center admits that he felt guilt about the transactions.

Money was exchanged for articles about drugs that are a matter of life or death.

So were these articles bought? We decided to try to find out.

What are human lives to us? What is advertising, and what does it mean to work in PR? And further, what is journalism?

Through this series, we hope to address these questions together with affected patients and their families. 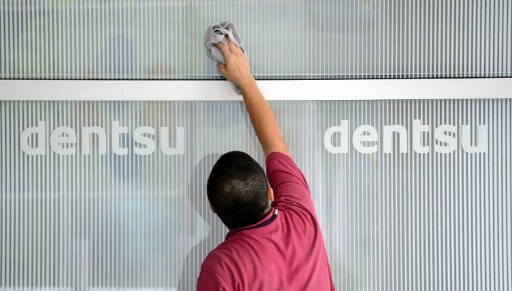 The article in question pertained to blood thinners and was provided by Kyodo News from June to July 2013. It was published in the morning editions of the following eight newspapers:

Although the headlines and prominence of the article differed from paper to paper, the text in each case was that of the same article provided by Kyodo News. The content of the article can be summarized as follows:

The entire text of the article is as follows:

“Taking blood thinners is essential to prevent stroke, but many people are unhappy with their blood thinners, and every year, 33,000 people go off their prescriptions. This statistic was revealed in a study by Healthy Nippon 21 Forum (chair: Tokyo University Emeritus Professor Fumimaro Takaku).

The Forum analyzed more than 870,000 health insurance claims held by the Japan Medical Data Center, focusing particular attention on cardioembolic stroke, a type of stroke that can be especially serious. Its analysis revealed that 1.3 million Japanese people suffer from atrial fibrillation and other conditions that can lead to stroke, and of those, 750,000 are prescribed blood thinners.

Cardioembolic stroke is a condition in which blood clots resulting from atrial fibrillation travel to the brain and block the cerebral artery.

By analyzing data from medical examinations between January and September the year before last, the yearly rate of patient termination of blood thinners was estimated to be 4.3%, meaning that nearly 33,000 patients stop taking their prescribed blood thinning medication each year.

The Japan Stroke Association chairman Takenori Yamaguchi says, ‘Cardioembolic stroke carries great risks; in roughly 60% of cases, sufferers are left severely disabled, and three in four sufferers experience a relapse within ten years. Prevention requires patients to take blood thinners for the rest of their lives. Recently, a drug that only needs to be taken once a day has come onto the market, increasing patients’ options.’” That is as far as the article went. It didn’t name this new drug.

Atrial fibrillation is a condition in which a part of the heart beats irregularly and the heart cannot push out blood effectively. Clots of blood that develop inside the heart, as a result, can travel to the brain, blocking the cerebral artery and leading to stroke.

Internal documents and testimony from people involved reveal that Dentsu PR paid 550,000 yen to K.K. Kyodo in exchange for its provision of this article to newspapers. Internal Dentsu documents in our possession reveal the following:

The only blood thinner produced by Bayer Yakuhin is Xarelto, which went on sale in 2012, the year before the article was published. 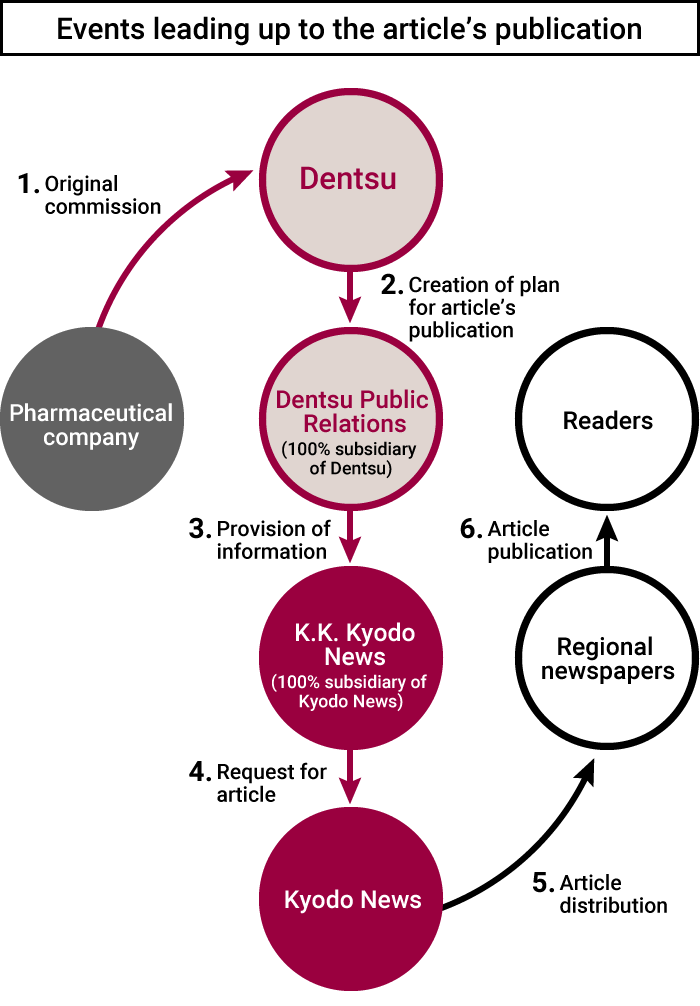 The article was written as an explanation of results of a study performed by an organization called the “Healthy Nippon 21 Forum.”

First, let’s take a look at the study period: January to September of last year (2011).

When the study was started, there was only one blood thinner on the market—Warfarin, a front-runner that has been on the market for 50 years.

Warfarin is, therefore, the only drug the article could have been referring to when it stated that many people are unhappy with their medication and 4.3% (corresponding to 33,000 patients) stop taking it every year.

So, what new drug was Japan Stroke Association chairman Yamaguchi referring to when he said that “Recently, a drug that only needs to be taken once a day has come onto the market, increasing patients’ options”?

The following three blood thinners had appeared on the market for patients with atrial fibrillation at the point in time the article was written:

The key here is “only needs to be taken once a day.”

According to the use directions for Eliquis, it must be taken twice a day, in the morning and evening. The same is true of Prazaxa. However, Xarelto only needs to be taken once a day.

We can see, then, that the “new drug” to which Chairman Yamaguchi, age 80, refers can only be Xarelto. Any physician or pharmacist handling pharmaceutical prescriptions would know this immediately. The article therefore cleverly directed readers toward a specific drug without mentioning the drug’s name or manufacturer. 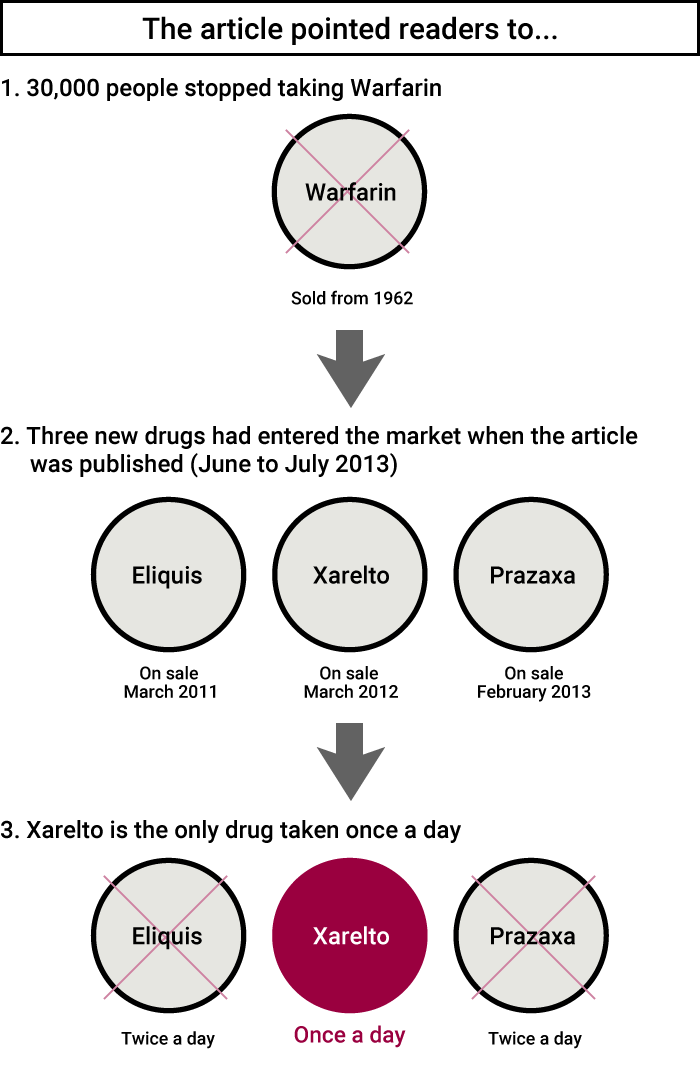 So how did the articles come to be published?

One hint comes from the payee indicated in the Dentsu internal documents cited above: “K.K. Kyodo.” Note that it is “K.K.” Kyodo’s business arm.

Kyodo News is a nonprofit cooperative organization. It is a news agency that provides articles to its members, many of which are regional newspapers nationwide. Meanwhile, K.K. Kyodo is a joint-stock corporation that engages in business activities. Kyodo News executives also serve as directors at K.K. Kyodo.

With regard to the articles in question, Kyodo News provided the articles to regional papers, and K.K. Kyodo received payment from Dentsu Group.

Regarding the articles in question, Kyodo News general affairs director Hitoshi Kawahara explains to us, “K.K. Kyodo is a 100% subsidiary of Kyodo News, but we handle stories brought to us from K.K. Kyodo just as we do those from ordinary PR firms—Kyodo News’ editorial board investigates the story and thoroughly ascertains its validity. Kyodo News does not receive any payment whatsoever.”

However, journalist Toshio Hara (91) expressed anger at hearing this. Hara previously served as the editor in chief at Kyodo News and president of K.K. Kyodo.

“K.K. is a subsidiary of Kyodo [News]. It’s a parent-subsidiary relationship. Clearly, they have the same interests,” said Hara.

“When pharmaceuticals are involved, [getting paid for getting articles published] goes beyond immoral—it’s criminal.”

“It means [the articles] are being bought. Selling human lives out of desperation to make money—that’s not journalism,” Hara said.

Kyodo News 35 Years (published 1981) states the following about K.K. Kyodo’s establishment: “Some said it would be confusing for it to have the same name as Kyodo News, but on the grounds that the two companies [Kyodo News and K.K. Kyodo] were two sides of the same coin, and using the same name was desirable from the perspective of employee morale, the board ultimately approved.”

So how was the article written, and how did it end up in newspapers? To find out, we met with the senior staff writer who wrote it.

“It just kind of happened”

At 4 p.m. on January 15, 2017, at a cafe in the suburbs of Tokyo, we met the Kyodo News senior staff writer who wrote the article. Age 65, he has long written broadly on nuclear power, medicine, biotech and other science-related topics.

“Can you tell us about this article that you wrote?” we asked him.

On the table in front of us, we placed a sheet of monitor paper which recorded a distribution of the article to member newspapers. The article had 53 lines, 11 characters per line. The date and time of delivery to the regional papers were indicated as being May 29, 2013, 12:22:32. The senior staff writer’s name was written in the “Author” box.

We told him that after the article was published, Dentsu PR paid 550,000 yen to K.K. Kyodo as a “media expense,”and showed him Dentsu’s internal document indicating such fact. Then we asked if he had known the article was part of a business deal over which money exchanged hands.

“Were you aware that this article was part of a business deal?” we asked.

“I suppose I must say that I was.”

We pressed him again. “I wasn’t totally unaware if that’s what you’re asking,” he replied.

According to the senior staff writer, the details of writing the article were as follows:

–The head of K.K. Kyodo’s medical information center brought him a press release from the Healthy Nippon 21 Forum about the state of patient administration of blood thinners. Several new blood thinners had just appeared on the market in quick succession for the first time in 50 years, and “competition was fierce,” according to the senior staff writer.

–The article was written directly on the basis of the Forum’s press release. Although the article also quoted the Japan Stroke Association’s Chairman Yamaguchi, he was not interviewed directly—his comment also came from the press release.

–The article was written because he decided it was news that should be conveyed to the public.

We asked him if he knew that writing the article would mean money would be paid to K.K.

–Well, it was probably unlikely that that wouldn’t be the case, I guess.

We asked him if he thought writing articles in exchange for payment is acceptable. He replied, “Well, I suppose it would probably be better if it didn’t happen, wouldn’t it?”

“It just kind of happened. In a way, I wasn’t fully aware of what was going on.”

The press release was prepared by Dentsu Group

The senior staff writer said he used a press release prepared by the Healthy Nippon 21 Forum as a basis for his article. The quote from Chairman Yamaguchi was written as though he had actually been interviewed, but in reality, the “quote” was merely an imprecise summary of comments made by Mr. Yamaguchi, and came straight from the press release.

However, there was one thing the senior staff writer did not know.

The Healthy Nippon 21 Forum was organized and managed by Dentsu Group. This fact was not written anywhere on the event’s website or the press release.

Next article
Journalism for Sale: All articles