Money changed hands for an article about blood thinners used to prevent stroke, a drug that could potentially save or take life.

Blood thinners are tricky: If ineffective, they won’t prevent stroke, but if too effective, they can cause cerebral bleeding that is sometimes fatal. Doctors have reported hundreds of deaths related to blood thinners to Japan’s Pharmaceuticals and Medical Devices Agency. Although no causal relationship has been definitively proven, even pharmaceutical companies warn that severe bleeding can lead to death.

The parties responsible for the article about blood thinners are the Dentsu Group and the Kyodo News Group. Dentsu is a major advertising agency, and Kyodo News provides articles for regional newspapers across Japan.

In response to our question of whether he knew that money had changed hands for the article, the Kyodo News senior staff writer who penned it said, “I suppose I must say that I was.” The article was published in eight regional newspapers without any mention of it being a paid promotion.

The staff writer had based his article on a press release from an organization called the Healthy Japan 21 Promotion Forum. The head of K.K. Kyodo’s medical information center said the ad agency had strongly recommended the press release to him. K.K. Kyodo is a 100% subsidiary of Kyodo News.

The “Healthy Japan 21” included in the forum’s name is a national initiative led by Japan’s Ministry of Health, Labour and Welfare. Dentsu PR was co-opting a government health campaign for its business.

This article will examine the Healthy Japan 21 Promotion Forum.

The importance of benefits for client companies

We have a copy of Dentsu PR’s internal consolidated report for December 2016 and January 2017.

Titled “Smart use of health surveys: Applications of the national health campaign Healthy Japan 21,” the seven-page report explains to employees the overview, objectives, and uses of surveys implemented by the Healthy Japan 21 Promotion Forum. It begins with a section titled “Health always makes compelling copy.” 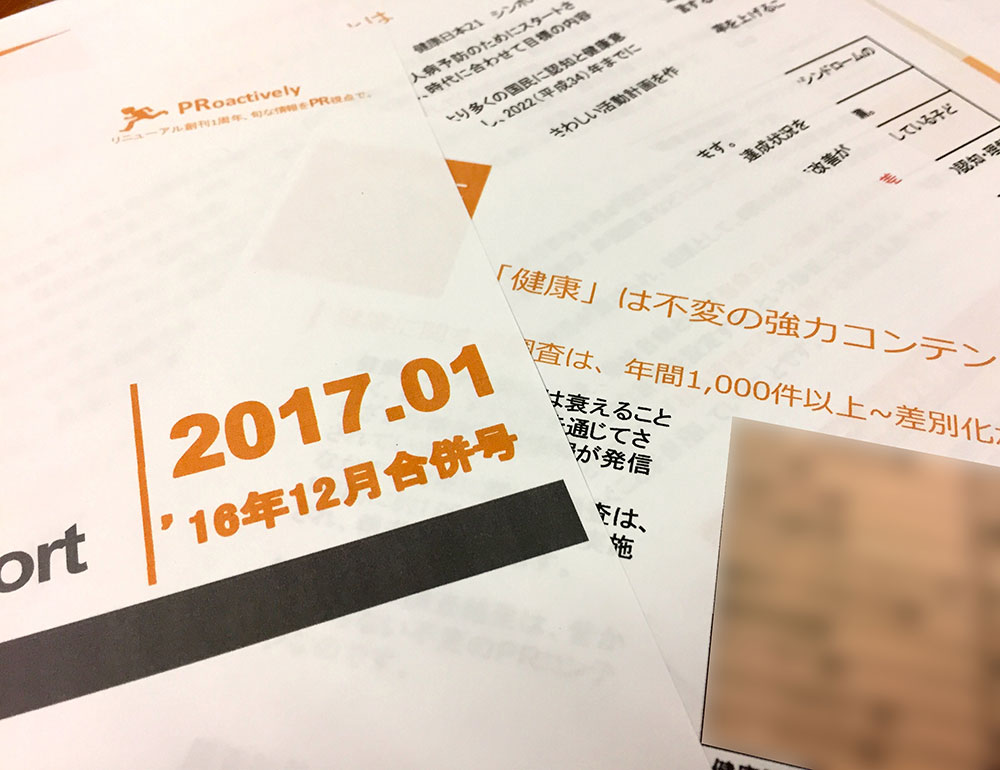 The following are excerpts from the report. Brackets and text in bold for emphasis have been added by Tansa.

・Interest in health never wavers, and various kinds of health-related information are disseminated through the media every day. In particular, over 1,000 health surveys are implemented and reported on each year. The results of such surveys have always been used for PR copy.

・PR copy attains new value when survey results match the government’s health-related messages. A company’s initiative that conforms to and supports government health campaigns can be promoted as being more socially conscious.

・It is always important for [Dentsu Group client companies] that are the subjects of surveys to receive benefits. Although surveys cannot mention specific products, we aim for a company’s product to be used after people see the survey results.

・Survey results are more likely to be reported on if they include a comment from an expert, because it is easy for the media to use comments that have already been provided.

In short, Dentsu PR taught its employees to use national policies and the authority of experts to advertise clients’ products.

As an example of copy that effectively used the above techniques, the report also included the press release that had formed the basis of the Kyodo News article about blood thinners.

As we explained in the first part of this series, money changed hands for an article about this potent drug. How would patients and their families feel if they knew?

The article was picked up by eight regional newspapers in 2013, with a total of over 1.8 million copies printed.

Here are the events leading up to the article’s publication.

4. The staff writer wrote his article based on the press release, without consulting any doctors.

According to an individual familiar with Dentsu, “media expenses” refer to compensation paid to media organization such as newspapers, magazines, and TV stations for publishing ads. They said the sum was paid to Kyodo News for disseminating the article, regardless of the number of regional newspapers that picked it up.

Payment was dependent on whether Kyodo News released the article. The Dentsu affiliate called it “payment for successful publication.”

Following Tansa’s publication of this series’ first article on Feb. 1, 2017, Kyodo News wrote to us to say that their “editorial division determined that the article in question had news value and that it was written and published as such.”

We find that hard to believe.

First of all, the staff writer used the doctor’s comments from the press release without interviewing the man himself. The article merely introduced the quote with “says,” implying that that the doctor had been interviewed directly.

Furthermore, the staff writer didn’t even know that Dentsu PR managed the forum, despite the fact that such information could be found online.

In both the above message and other communications with Kyodo News, there were further points that differed from our understanding of the facts. We will elaborate on them as the series continues.

As part of our investigation, we met with the Dentsu PR employee in charge of the Healthy Japan 21 Promotion Forum.

Promoting products through a government campaign

The phone number was listed on the forum’s website. So was its address: the seventh floor of a building in Tokyo’s Ginza neighborhood, close to both Kyodo News and Dentsu.

We requested a meeting with office head, saying we had some questions about the forum’s materials. He agreed to see us at 11 that morning.

Our meeting place wasn’t the forum’s official address but the first floor of the Hamarikyu Mitsui Building, in which Dentsu PR’s office was located.

Just what kind of organization was the Heathy Japan 21 Promotion Forum? The press release that the Kyodo News article was based on contained the following.

In short, it was an organization working to support a government policy.

The forum’s board was chaired by University of Tokyo Professor Emeritus Fumimaro Takaku, a leading physician who had served as president of the Japanese Association of Medical Sciences since 2004. The board included other prominent figures such as St. Luke’s College of Nursing President Toshiko Ibe and former national volleyball team member Yuko Mitsuya.

Forum members were “corporations that support the forum’s activities out of a deep concern for public health issues,” and they included food product manufacturers and pharmaceutical companies.

Upon arriving for the meeting, we were greeted by the forum office head and a female employee, both of whom worked for Dentsu PR’s research department. The office head said that he held concurrent posts at the research department and forum but that he wasn’t stationed at the latter. He usually worked from his desk at Dentsu PR, and his salary came solely from Dentsu PR too.

We showed them the Dentsu PR internal report and asked the following questions.

“This internal report states that ‘Although surveys cannot mention specific products, we aim for a company’s product to be used after people see the survey results,’” we began.

“Meaning that although Dentsu PR manages it, the forum presents itself as supporting national policies so that client companies’ products will be used?”

“It’s a fine line,” the office head replied. “We don’t directly mention product names, but we try to convey the message that these companies are supporting [national policy] Healthy Japan 21’s goals as part of their social contributions or CSR activities.”

“So although you don’t mention product names, you aim for your client companies’ products to be used.”

“Why is Dentsu PR managing the forum?” we asked.

“You could say that we [Dentsu PR] created the forum in the first place,” he said. “Dentsu PR does all the work, such as conducting surveys and holding seminars. The forum has a kind of contract [with Dentsu PR].”

“Who wrote the forum’s press release about blood thinners?” 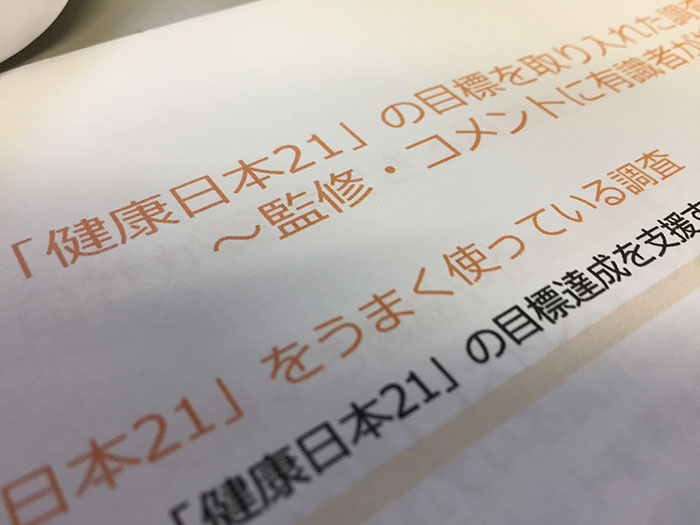 Part of the press release was included on page four of the internal report. It was introduced as an example of effective copy.

Takenori Yamaguchi, then chairman of the Japan Stroke Association, had provided the press release with his comment, “Recently, a drug that only needs to be taken once a day has come onto the market, increasing patients’ options.” We wondered if he knew what had been going on behind the scenes.

On Jan. 27, 2017, we met with Yamaguchi at his office at the National Cerebral and Cardiovascular Center in Suita, Osaka Prefecture.

“I didn’t know,” Yamaguchi replied. He seemed surprised by our questions.

What shocked him even more were the passages of Dentsu PR’s internal report that read “A company’s initiative that conforms to and supports government health campaigns can be promoted as being more socially conscious” and “We aim for [our client companies’] products to be used.” In other words, he was shocked by Dentsu PR’s tactic of using a government health campaign to advertise specific companies’ products.

“I thought I could trust the Healthy Japan 21 Promotion Forum since its board is chaired by the well-respected Dr. Takaku, president of the Japanese Association of Medical Sciences,” Yamaguchi said. “I was wrong.”

In response to our questions, Bayer Holding PR headquarters pharmaceutical product department manager Naoko Miyoshi said, “Bayer Yakuhin requested the services of the Dentsu Kansai Branch Office to raise awareness of this condition, so that patients who suffer from atrial fibrillation can receive appropriate treatment to prevent stroke. However, the particulars of the agreement are trade secrets, which I am not at liberty to discuss.”

Forum chair said he would resign

Had Fumimaro Takaku, the forum’s top-ranking member, known? Takaku was a leading medical professional who also served as president of the Japanese Association of Medical Sciences.

We stopped by Takaku’s office at the association in Tokyo’s Bunkyo City on Jan. 30, 2017.

When we began with “We’d like to ask about the forum,” Takaku gave an unexpected reply.

“I’m no longer serving as chair. I haven’t heard anything about the forum going under, but we no longer meet at all. Maybe it just faded out.”

“No longer serving as chair”? Takaku’s name was still clearly listed on the forum website as such.

We showed him the forum’s press release about blood thinners.

“Yes, this clearly reads like an advertisement for [the pharmaceutical company] Bayer,” Takaku said after passing his eyes over the document. “And they used my name [in the press release] without permission. What a nuisance.”

“[When I became chair of the board,] I thought Dentsu was running the forum on a semi-volunteer basis,” he continued. “I had no idea it would be used for business purposes like this.”

Takaku then took his cellphone out of his breast pocket and, right in front of us, dialed the forum office. No one picked up.

“As president of the Association of Medical Sciences, how do you feel about people reading compensated articles about medical care?” we asked.

“I could make a statement saying that it’s a serious problem,” Takaku replied. “But I’m chair of an organization doing it. It’d be ridiculous for me to denounce something I had a hand in.”

Takaku said he would resign as chair of the forum’s board. He asked how best to prove he had done so and said he would contact us the next day.

“The forum is recommending specific drugs,” Takaku said. “I’ll tell them that I cannot take responsibility for something even I, as chair, didn’t know about and inform them of my resignation.”

“This is just outrageous,” he groused as we were leaving his office.

The next day, Tansa received an email from Takaku.

He wrote to say that other board members had advised him to further consider the situation and that he would not be resigning at present.

(Originally published in Japanese on Feb. 9, 2017. Titles are given as of the time of original publication.)

Previous article Next article
Journalism for Sale: All articles