The Japanese government officially recognizes the abduction of 17 citizens, taken by North Korean agents in 12 separate incidents. The first occurred on Sept. 19, 1977, when Yutaka Kume (then 52) was taken off the coast of Ushitsu, Ishikawa Prefecture. The last officially recognized abduction was that of Keiko Airmoto in Europe in July 1983.

But it was 1972 when a detective from the Ibaraki Prefectural Police’s Katsuta Station speculated that missing nuclear scientist Tatsuya Takemura “might have been carried off by the North.” In other words, a member of the police suspected abduction by North Korea five years before the first officially recognized case.

How might events in the ensuing years have been different if Takemura’s case had been shared with other government agencies? Would the authorities have responded more proactively to the threat of abduction?

That’s what I wondered when I first heard the Ibaraki detective’s words from Takemura’s former subordinate at the Power Reactor and Nuclear Fuel Development Corp (PNC). This case has profound implications for Japan’s national security. 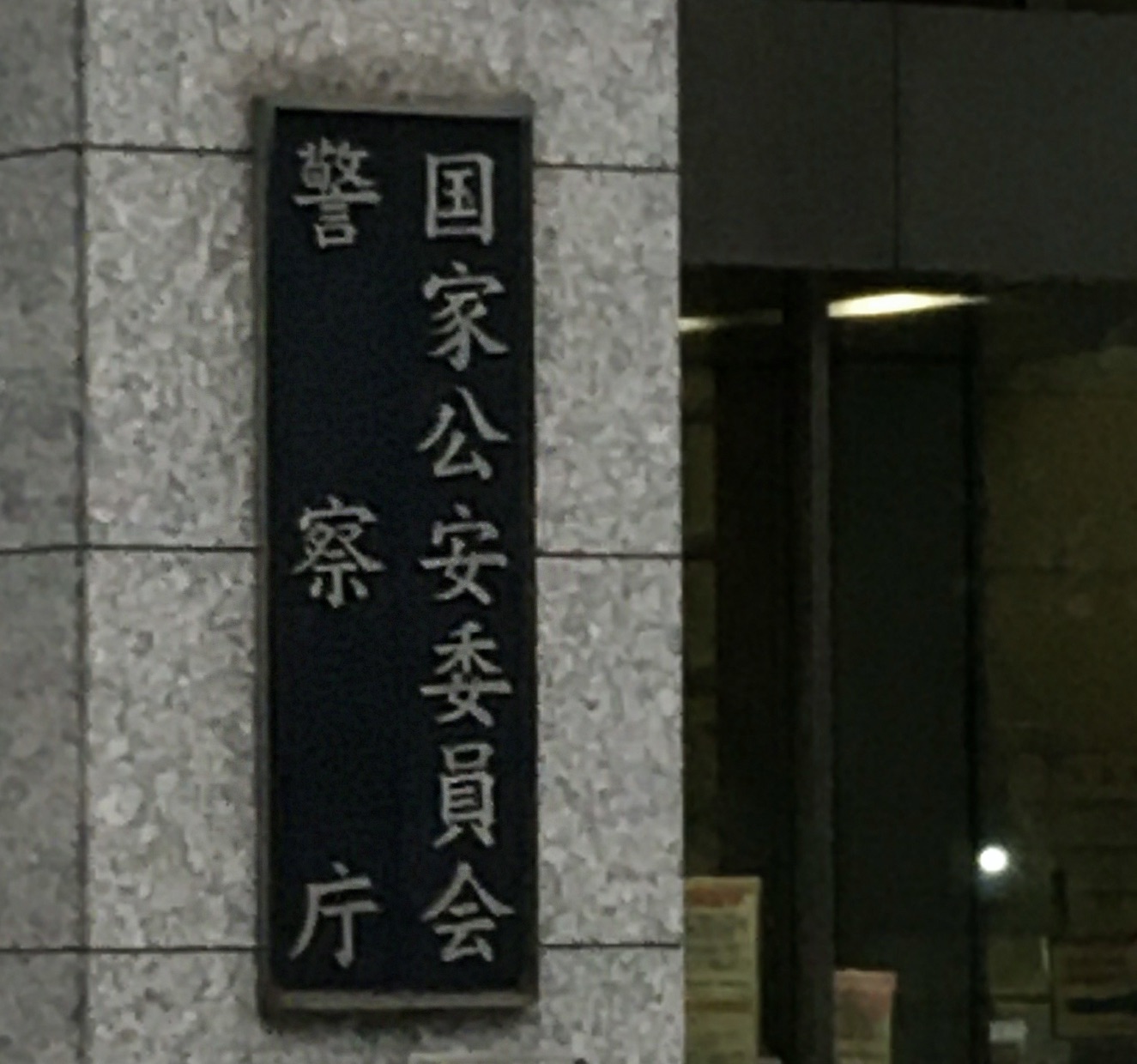 Interview at an abduction site

Just how alert were Japan’s police to the possibility of North Korean abductions in the early 1970s?

I first reached out to Yoshio Omori, former head of the Tokyo Metropolitan Police Department’s Public Security Bureau. A capable police bureaucrat, Omori had also served as head of the Cabinet Intelligence and Research Office and had handled a number of difficult cases, including the 1996-7 Japanese embassy hostage crisis in Peru. (Omori passed away in September 2016.)

We met at the Hotel Grand Palace in Tokyo’s Iidabashi neighborhood. In fact, this hotel had also been the site of an abduction, though not one executed by North Korea. On Aug. 8, 1973, agents of the (South) Korean Central Intelligence Agency kidnapped dissent leader Kim Dae-jung from within its premises.

However, the identity of the abductors wasn’t immediately known. A week after Kim’s abduction, a United Nations Commission for the Unification and Rehabilitation of Korea internal letter listed “[Democratic People’s Republic of Korea] agents” among five potential culprits. The letter went on to note that North Korean agents were “said to have increased their presence, activities, and organizational network in both Japan and the [Republic of Korea].” 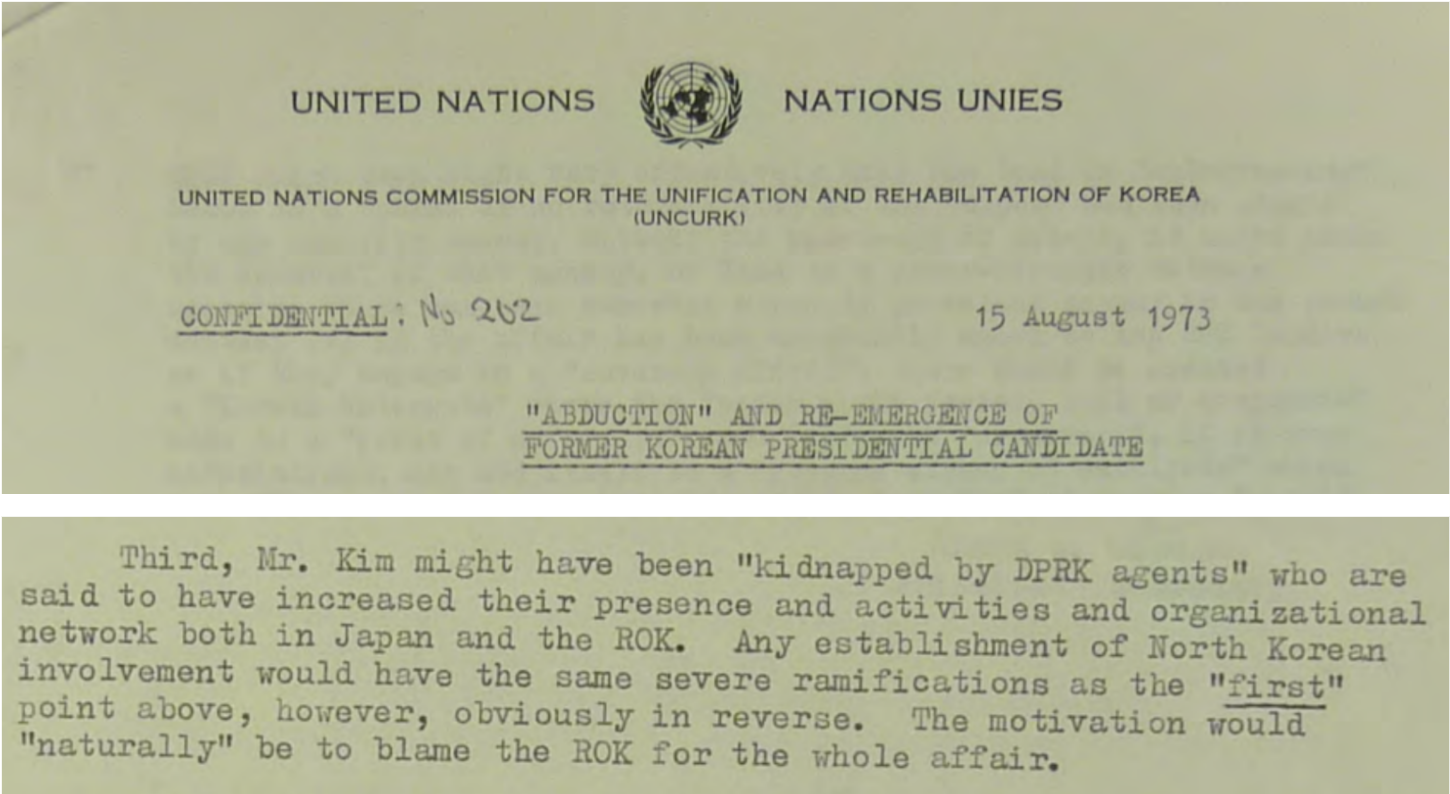 A United Nations Commission for the Unification and Rehabilitation of Korea internal letter dated August 15, 1973 speculates on the possibility of an abduction by North Korea on Japanese soil. Document obtained from the Wilson Center Digital Archive.

A year after Takemura’s disappearance — and four years before the first officially recognized case — UN officials believed that abduction by North Korea on Japanese soil was within the realm of possibility. But had the Japanese police shared this awareness?

When I spoke with Omori at the Hotel Grand Palace, he recounted to me how the relationship between Japan’s and South Korea’s police frayed following Kim’s kidnapping. However, his memory came up blank when I broached the subject of the missing Takemura.

“When I think back on my career in policing, I really regret that we couldn’t prevent the abductions by North Korea,” Omori said. But despite his recognition of the police’s failings, he had never heard of Takemura’s case.

I also contacted Takaji Kunimatsu, who had served as commissioner general of the National Police Agency from 1994 to 1997. After explaining the details of Takemura’s disappearance in an email, I asked the following two questions.

1. When did the Japanese police begin to suspect abductions by North Korea?

2. When were these suspicions first shared with police throughout the country?

“I have no knowledge of Tatsuya Takemura, including the fact that he went missing,” Kunimatsu responded.

“As to North Korean abductions in general, although of course I gave the issue, being such a serious matter, the attention it deserved during my time as commissioner general, I never did foreign affairs police work and was never directly involved with abduction cases. As such, I have no clear recollection that could provide a definite answer to your two questions.

“Although it may be natural for you to assume I know something, given my oversight of the issue as commissioner general, my memory has faded since I retired.”

If a former commissioner general couldn’t recall when the police became cognizant of abductions, it was hard to imagine that they had taken preventative action following Takemura’s disappearance.

The disappearance of a plutonium expert like Takemura would also be relevant to organizations outside Japan.

Did his employer, PNC, have a duty to report his disappearance to the Japanese government, the International Atomic Energy Agency, or the U.S.’s Argonne National Laboratory, where Takemura had trained?

I tried asking the Japan Atomic Energy Agency, into which PNC had been reorganized in 2005, but all I received in response was: “We checked with the relevant department but were unable to ascertain how this kind of information was managed at the time.”

PNC knew that Takemura had gone missing: The Ibaraki detective investigating his disappearance had visited its facilities. Nevertheless, it appeared there had been little effort to record and maintain information about the potential leak.

So this was how Japan managed its nuclear technologies.

(Originally published in Japanese on June 9, 2020. Translation by Annelise Giseburt.)