At least 20 years of compensated articles

In the previous articles of “Journalism for Sale,” we revealed that the Dentsu Group had been compensating the Kyodo News Group for articles disseminated to regional papers throughout Japan.

The compensated articles were about pharmaceuticals.

One such drug was blood thinners used to prevent stroke. On behalf of a pharmaceutical company contracting Dentsu, Dentsu PR had approached K.K. Kyodo with an idea for an article meant to advertise the company’s blood thinners. K.K. Kyodo passed the idea on to Kyodo News, where it was crafted into a news article and disseminated to Kyodo’s network. When regional papers ran the article, there was no mention of it being an ad or a paid promotion. After the article’s release, Dentsu PR paid K.K. Kyodo.

Although no causal relationship has been definitively proven, doctors have reported hundreds of deaths related to blood thinners. The Kyodo News article on blood thinners had been based on a press release made by an organization managed by Dentsu PR. When he learned the truth about the article, the Japan Stroke Association executive director, who had reviewed the press release, expressed anger at “being used” and regret as a medical professional.

But it wasn’t just blood thinners. There were other cases of Dentsu PR paying for articles, one of which was even penned by the K.K. Kyodo medical information center head, the employee who dealt directly with the ad agency. Kyodo News confirmed our findings.

Readers know that ads are selling something. Conversely, they generally see articles as objective, having been published following rigorous internal review. But reality isn’t always so straightforward, as seen with the compensated Kyodo News articles that were not identified as paid promotions. Readers were unaware that pharma money was behind their supposedly objective news.

This time, we will examine how long Dentsu and Kyodo News, through their subsidiaries, had been publishing compensated articles.

Unlike over-the-counter medicine, ads for prescription drugs targeting the average citizen are banned by Japan’s Ministry of Health, Labour and Welfare.

However, no such restrictions apply to news articles about said drugs. As the product of independent reporting, they are thought to be free from pharmaceutical companies’ interests and influence. But are they?

“Pharmaceutical companies want to increase their sales,” noted a former pharma salesperson we spoke with. “But since they can’t run ads for prescription drugs, they think of ways to get them covered in ordinary news articles. However, like the cases described in ‘Journalism for Sale,’ paying for articles clearly crosses a line.”

“Ad regulations aren’t an issue when it comes to articles,” said an individual familiar with Dentsu. “Dentsu cleverly used Kyodo News to advertise the drugs its clients wanted to sell.” 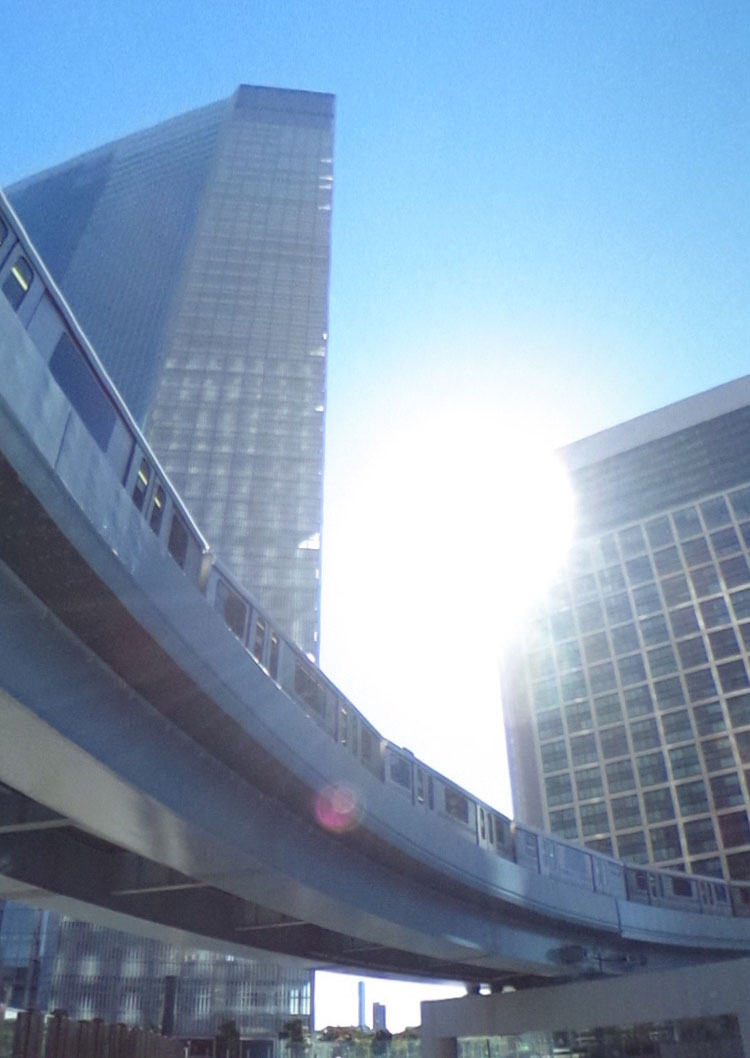 Wanting to know more about the ad regulations, we interviewed Tomohiro Inoue, an advertising specialist in the Compliance and Narcotics Division, Pharmaceutical Safety and Environmental Health Bureau, Ministry of Health, Labour and Welfare.

“What is the prescription drug ad ban based on?”

“It’s based on a notice sent in 1980 to prefectural governors from the director of the ministry’s Pharmaceutical Affairs Bureau. It’s called ‘Standard for Adequate Advertisement of Pharmaceutical Products,’” Inoue replied.

“And why are ads for prescription drugs banned?”

“Just as they can be very effective, prescription drugs can also have side effects and be dangerous,” Inoue said. “They should only be recommended by trained medical professionals. In particular, ads for drugs treating cancer, leukemia, and sarcoma are automatically violations of the Pharmaceuticals and Medical Devices Act.”

But some pharmaceutical companies look for ways to bend the rules.

On Jan. 6, 2015, the Japan Pharmaceutical Manufacturers Association, which is comprised of over 70 pharmaceutical companies, called on its members to abide by the advertising restrictions.

“Recently, among information purveyed through media such as TV and newspapers, so-called ‘disease awareness campaigns’ and articles that don’t mention a specific company name have been said to ‘invite misunderstandings through incomplete content,’ ‘incite unease among patients and the general public,’ and ‘seem like ads for specific prescription drugs despite not mentioning a company name.’ We have heard these concerns from not only medical professionals but also members of the general public.”

The aforementioned individual familiar with Dentsu had this to say.

“[Dentsu] used Kyodo News to avoid the advertising restrictions, and the newswire fulfilled its role well. Dentsu gets to advertise its client companies’ drugs through a trusted media outlet, and Kyodo News gets paid through its subsidiary. It’s a win-win. The only ones who aren’t in on it are the readers.”

We have written proof that the Dentsu Group has been paying to advertise pharmaceuticals through Kyodo News for a least 12 years: a Dentsu PR internal document from June 2005. 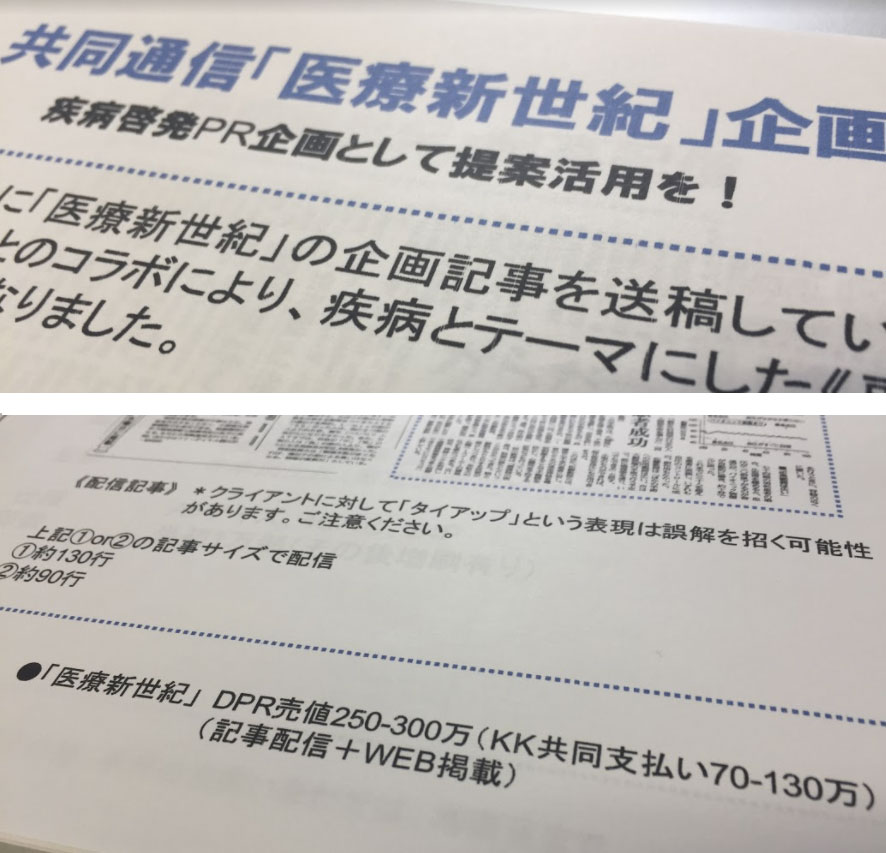 “Each week, Kyodo News sends regional newspapers a feature article in its ‘New Era of Medicine’ section,” the document read. “Through a collaboration with the K.K. Kyodo medical information center, it has become possible to plan disease-themed sets of ‘informational pamphlet + article release + web news.’”

“Article release” was part of the so-called collaboration. According to an individual familiar with Dentsu, articles distributed by Kyodo News to regional papers were used as “PR features” — as ads.

The document also mentioned payment. On the next page, it noted that articles can be either roughly 90 or 130 lines in length and included a budget estimate for dissemination to regional papers and posting to Kyodo News’ website.

According to regional papers and individuals familiar with Dentsu, only K.K. Kyodo received payment for “New Era of Medicine” articles. Regional papers were not paid for carrying them.

Tansa was able to confirm that the article was carried in 18 regional papers around Japan. Its content can be summarized as follows.

“Although hyperlipidemia, a condition in which the blood has high levels of cholesterol, causes stroke and heart disease, it has no subjective symptoms and may be discovered too late.

“In some cases, it may be necessary to treat high cholesterol with medication.”

In response to our questions, Astellas Pharma replied: “We cannot confirm the specifics of the matter, as the person in charge has since left the company and no records remain.”

The papers that carried the article are as follows, with the cities they are headquartered in given in parentheses. All articles were released in 2005. 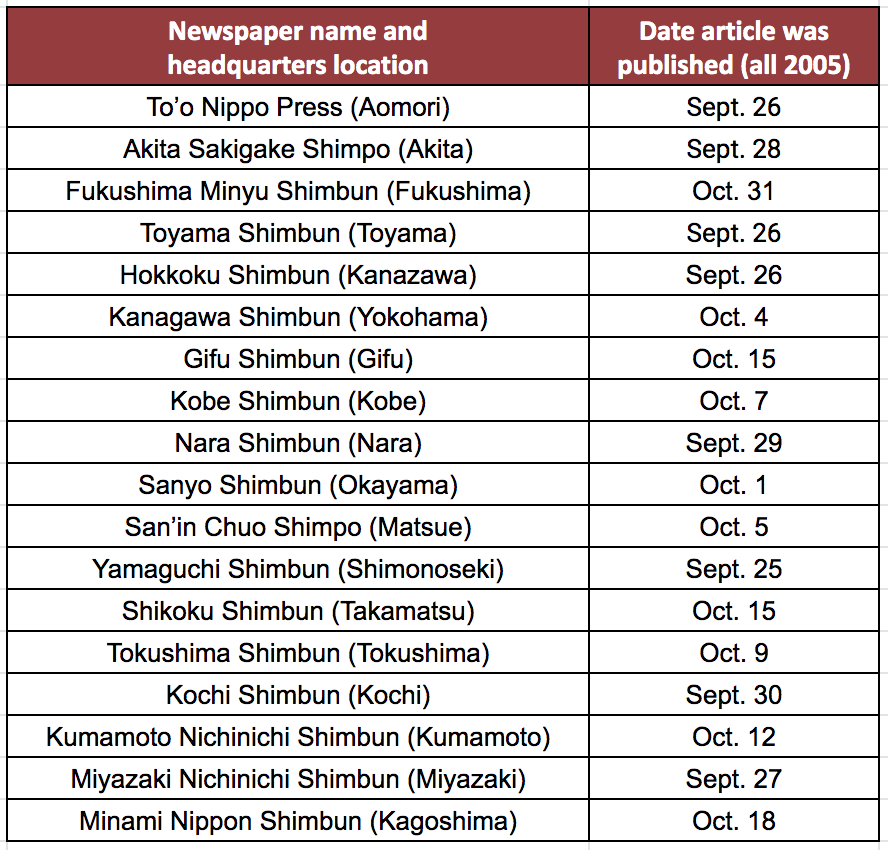 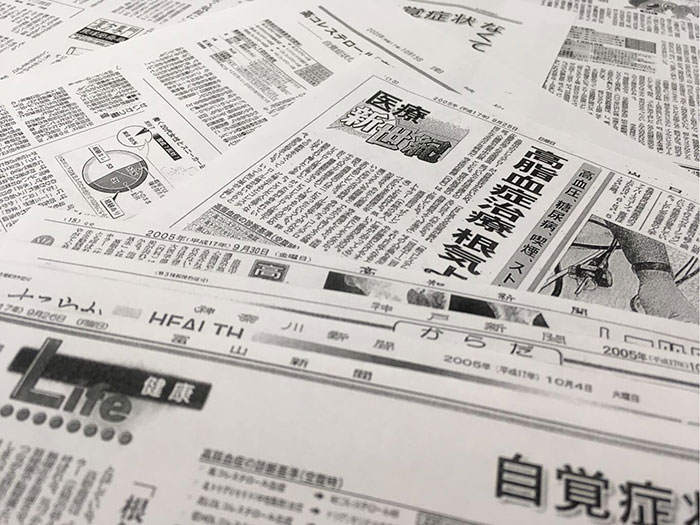 Kyodo News “pretends not to know”

The one to pen the 2005 hyperlipidemia article had been the K.K. Kyodo medical information center head. He appeared in this series’ previous article as the author, confirmed by Kyodo News, of a compensated article on the acne medication Adapalene Gel. Before becoming the head of K.K. Kyodo’s medical information center in 2002, he had worked as a Kyodo News science section reporter.

Here was another case of Kyodo News releasing an article written by the K.K. Kyodo employee in direct contact with the Dentsu Group.

For how long had Kyodo News been publishing compensated articles? On Dec. 29, 2016, we interviewed the medical information center head.

“Why is Kyodo News publishing compensated articles?” we asked.

“We don’t publish just anything,” he replied. “Major media organizations are hesitant to get their hands dirty, you know, when money is involved. But data suggests it’s a good idea to do these articles. It’s a real tightrope act, in a sense.”

“How long has this arrangement been in place?”

“A long time. Since before I came to K.K. Kyodo. One of my predecessors did it too.”

“It’s more like from Dentsu,” he corrected us. “The relationship is with Dentsu.”

“This can’t just be some independent operation by yourself and your predecessor,” we said. “K.K. Kyodo and Kyodo News must know what’s going on.”

“Even if they do, they pretend that they don’t. That’s what happens when money’s involved.”

Two weeks after our initial interview, on Jan. 10, 2017, we spoke with the center head again over the phone.

“I wanted to clear my conscience,” he said.

We told him to be careful: “It’s possible that Kyodo News will say you were acting alone to write articles, get them released, and receive payments — even though you weren’t the one to come up with this system.”

On the evening of March 24, 2017, we spoke on the phone with K.K. Kyodo managing director and general affairs manager Kohei Kaneko. He told us that the medical information center head no longer held that position. Since when? And why?

Kaneko agreed to look into the matter and call us back, but later he sent us an email instead. “I am not at liberty to discuss the particulars. Thank you for your understanding.”

“On a silver platter”

The (now former) medical information center head had said that the Dentsu Group had been paying for articles since his predecessor’s time. On Jan. 4, 2017, we went to see the predecessor.

He was a former Kyodo News senior staff writer, specializing in science. In the early 1990s, a few years before retiring in 1997, he had been transferred to K.K. Kyodo to serve as head of its medical information center. That means Kyodo News had been publishing compensated articles for at least 20 years. We asked him about payments from the Dentsu Group.

“After we’d release an article through our network, Dentsu would let us know what they’d paid,” he said.

“Health-related articles are really popular. The health section always takes up an entire page; it’s the same at any paper. Science section reporters, even the senior staff writers, are always frantically searching for article ideas to meet the demand. If someone offered one on a silver platter, of course it gets used.”

“Almost everyone does it”

“When did this system of compensated articles begin?” we asked.

“It was already going on [when I was transferred to K.K. Kyodo]. Maybe it’s been this way since K.K. Kyodo was established. I wouldn’t be surprised if my predecessor, and his predecessor — basically, since the beginning — were doing it too.”

He continued: “It’s my understanding that most major media organizations do it.

“I often read [other papers’] articles and think ‘This is totally selling something.’”

The Dentsu and Kyodo News groups colluded to publish compensated articles about pharmaceuticals. As explained above, the Ministry of Health, Labour and Welfare bans prescription drug ads targeting the average reader.

But who do these restrictions apply to?

Both Dentsu and Dentsu PR declined to comment on the Ministry of Health, Labour and Welfare restrictions. Dentsu said it “wasn’t in a position to respond,” and Dentsu PR said it “was unable to state an opinion on articles released by Kyodo News.”

We asked whether the Kyodo News Group would continue to accept payments for articles.

On March 24, 2017, both Kyodo News and K.K. Kyodo “declined to comment on matters related to [their] business policies.”

(Originally published in Japanese on March 27, 2017. Titles are given as of the time of original publication.)