A revealing apology from Kyodo News

In the first three “Journalism for Sale” articles, we revealed that the Dentsu Group paid the Kyodo News Group for articles on blood thinners.

Change of plans — this time, we will examine Kyodo News’ apology instead.

We were just beginning to draft our fourth article when an email from Kyodo News’ General Affairs Director Hitoshi Kawahara arrived on the afternoon of Feb. 22.

“As a result of further investigation,” the email read, “We found that the head of K.K. Kyodo’s medical information center provided the Kyodo News editorial department with a document in an article-like style based on information from university professors and others. As a result of our inquiry, we determined that the article’s real author was the K.K. Kyodo medial information center head, and we amend our response given on Jan. 31. We apologize for the mistake in our original response.”

The “response given on Jan. 31” had been Kyodo News’ reply to a question we sent prior to releasing this series’ first article. It hadn’t pertained to the articles about blood thinners, the subject of our previous coverage, but to an article about an acne medication called Adapalene Gel.

After stating that we had learned that the K.K. Kyodo medical information center head had penned the acne medicaiton article, we had asked the following: “Please tell us Kyodo News’ position on an employee of K.K. Kyodo, which received payment from the Dentsu Group, writing an article for your organization. And state your reason.”

But at first, Kyodo News denied that a K.K. Kyodo employee had written the acne article. The organization had always told us that K.K. Kyodo was an information service company independent from its parent. Kyodo News was a media organization, and as its financial arm K.K. Kyodo had no involvement in the research or writing of articles. The two were supposedly totally separate.

Evidence pointed to the contrary.

Penned by the payee

We have a copy of the release log for the Kyodo News article about Adapalene Gel acne medication. In addition to recording the headline and release time, it identified the head of K.K. Kyodo’s medical information center as the article’s author. He already held that position at the time of the article’s release.

The center head had worked as a science section reporter for Kyodo News before assuming his current position at K.K. Kyodo. Employees moved between the two supposedly separate organizations.

Released at 11:34 a.m. on May 12, 2010 and carried in seven regional papers, the article reported that Adapalene Gel was now covered by insurance and that treating acne at an early stage can prevent it from becoming chronic.

We found the following entry in Dentsu Group internal documents.

It was the same pattern as the blood thinners articles: payment for successful publication. But this time, the article had been penned by an employee of K.K. Kyodo — the direct recipient of money from the Dentsu Group.

We were able to confirm that the article was carried in the following seven regional newspapers. Their headquarters locations are given in parentheses. 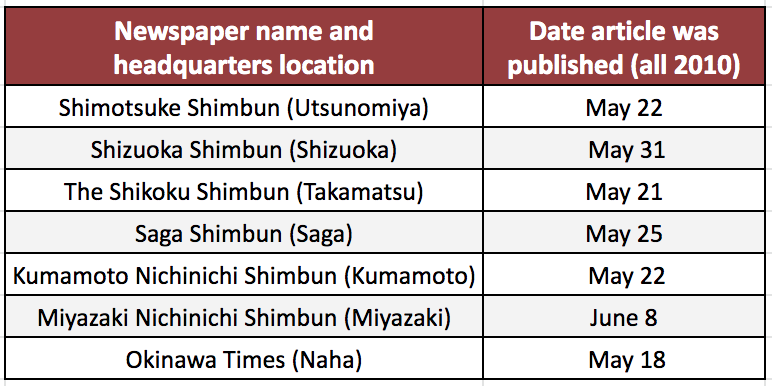 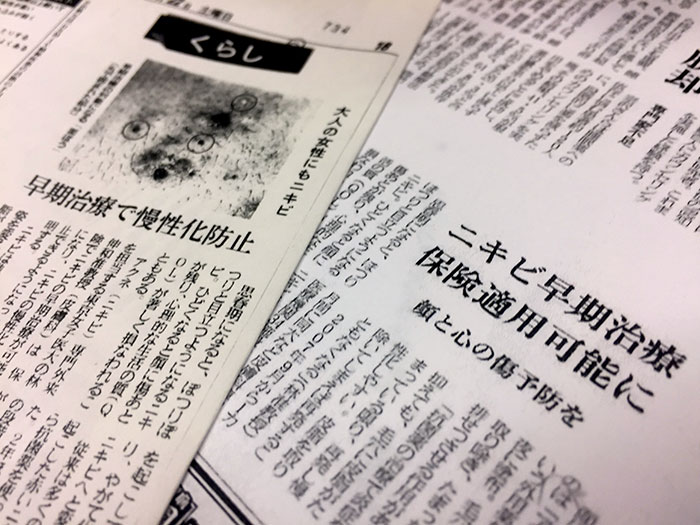 “You wrote this article on acne medication, is that correct?”

The fact that the center head had written the article was confirmed by both the release log and the man himself. Based on this information, we sent a question to Kyodo News and K.K. Kyodo on Jan. 23, 2017: “Please state your position on a K.K. Kyodo employee writing an article released by Kyodo News.”

From Kyodo News: “[The acne article] was not written by the medical information center head. […] It is our understanding that he prepared a document as part of K.K. Kyodo’s information service work and provided it to the Kyodo News reporter in charge. […] The Kyodo News reporter submitted a draft based on independent reporting in addition to careful consideration of the news value of the document provided, alongside other press releases and PR materials. The article was released following review by a desk editor.”

From K.K. Kyodo: “Based on information from Dentsu PR, the medical information center head created a document that contributes to information service activities and provided it to the Kyodo News reporter in charge of the article. The center head did not write the article himself.”

It was a flat denial.

But the center head had told us himself that he wrote the acne article. Why were Kyodo News and K.K. Kyodo denying it?

On Feb. 16, 2017, we sent Kyodo News a reminder: “Please confirm your response that the K.K. Kyodo medical information center head did not research or write the article on acne medication.”

We gave Kyodo News until noon the next day to reply. The organization had already given an answer, so this was just a routine confirmation. We assumed it wouldn’t take long to check who had written the article.

But on Feb. 17, the deadline, we received a call from Kyodo News’ general affairs deputy director: “We believe we must answer responsibly. […] We are making inquiries with those involved; please understand that it isn’t a simple process.” He asked for more time. And on Feb. 22, we received the following (also included at the beginning of this article).

“As a result of further investigation,” the email read, “We found that the head of K.K. Kyodo’s medical information center provided the Kyodo News editorial department with a document in an article-like style based on information from university professors and others. As a result of our inquiry, we determined that the article’s real author was the K.K. Kyodo medial information center head, and we amend our response given on Jan. 31. We apologize for the mistake in our original response.”

But that wasn’t all.

Kyodo News’ response continued: “The K.K. Kyodo medical information center head, who was formerly a science section reporter, believed the article’s content was ‘of interest as medical news’ and had already spoken with and received approval from the editorial department. He then prepared and submitted a ‘document’ in an article-like style. A desk editor in the editorial department carefully examined the ‘document’ and determined that it had news value. The editor checked the facts and made adjustments before releasing it as an article.”

The first is that the editorial department had given approval. At an organizational level, Kyodo News had allowed an employee of its 100% subsidiary K.K. Kyodo to write an article.

The second point is the disappearance of the reporter mentioned in the response from Jan. 31, 2017.

Kyodo News had originally stated that “the Kyodo News reporter submitted a draft based on independent reporting in addition to careful consideration of the news value of the document provided, [and] the article was released following review by a desk editor.” But the amended response from Feb. 22 made no mention of this reporter.

Why had Kyodo News at first denied that the medical information center head had written the article? A search of their own database should have yielded the correct answer.

Kyodo News said the principal reason for the change in its response was “the testimony of the medical information center head.” In other words, if Kyodo News’ explanation is to be believed, they simply took the center head at his word the first time around, without confirming what he said.

The release log showed that the K.K. Kyodo medical information center head had written more than just the compensated acne medication article for Kyodo News. From the number of entries, his contributions (listed below) seemed like common practice. Not all of them related to medical products, and it is unknown whether the articles were compensated.

Articles about pharmaceuticals are frequently read with greater interest than those on other subjects, because patients are often hoping against hope for information that could improve their condition.

In the first three articles of this series, we revealed how the Dentsu Group capitalized on this tendency as an advertising strategy. A former employee told us that “articles about life-threatening matters are easy to get published,” and a Dentsu PR internal report noted that “the results of health surveys have always been used for PR copy.”

As a journalistic organization, what was Kyodo News’ view on the matter?

We interviewed journalist Toshio Hara, who had previously served as both editor-in-chief of Kyodo News and president of K.K. Kyodo.

“It would be strange for Kyodo News not to be aware [that articles were being compensated],” he said. “And if it is aware, wouldn’t that be almost criminal? This issue about pharmaceuticals is beyond immoral — it should be illegal.

“Of course [compensated articles] should be kept out of journalism. It’s just absurd — and nothing short of a buyout.”

Hara continued: “You should go see Kyodo News’ president and grill him on whether it’s acceptable for Kyodo News’ subsidiary to be doing this.”

On Jan. 26, 2017, we requested an interview with Kyodo News President Masaki Fukuyama. Kyodo News’ General Affairs Director Kawahara got back to us on Jan. 30.

“We have responded with sincerity to your inquiries up to now and will continue to do so in the future. We believe that is natural as a journalistic organization engaged in reporting and editing.” Nevertheless, our interview request was denied.

On March 1, 2017, we again requested to interview President Fukuyama.

We learned something from Kyodo News’ apology: that Kyodo News and K.K. Kyodo are not separate entities as claimed, but that their relationship is close enough to even be producing articles together. Kyodo News itself admitted to publishing an article written by an employee of its subsidiary — a subsidiary that was being paid by the Dentsu Group.

(Originally published in Japanese on March 2, 2017. Titles are given as of the time of original publication.)

Previous article Next article
Journalism for Sale: All articles