Members of joint labor union Namasufa were camping out on the University of the Philippines Diliman campus in Quezon City, Metro Manila. Based out of their university campsite, the union members — all of whom had been fired by banana producer Sumifru — had been petitioning central government agencies to require the company to reinstate them, this time through direct employment.

I visited the Namasufa members in Manila on the afternoon of Aug. 18, 2019.

Their camp consisted of a row of shanty houses that union members had pieced together themselves by draping tarps over frames of bamboo, wooden boards, and ropes slung between sturdy tree trunks. There was a kitchen, a bathing area, and even a little shop selling sweets and other goods. The Philippine Commission on Human Rights, located on the same university campus, let the union members use its toilets.

Namasufa arrived in Manila in November 2018. Because they lacked money for airfare, 309 union members split into two groups and made the over-1,500-kilometer journey by land and sea over a few days. That would be like traveling from Tokyo to the southern tip of Japan’s main islands. The union members made it to Manila on Nov. 27 and 28. They moved camp twice during their time in the capital: first from Mendiola Bridge, located near the Office of the President, to Liwasang Bonifacio square, then to the university campus, where they stayed since March 13, 2019. 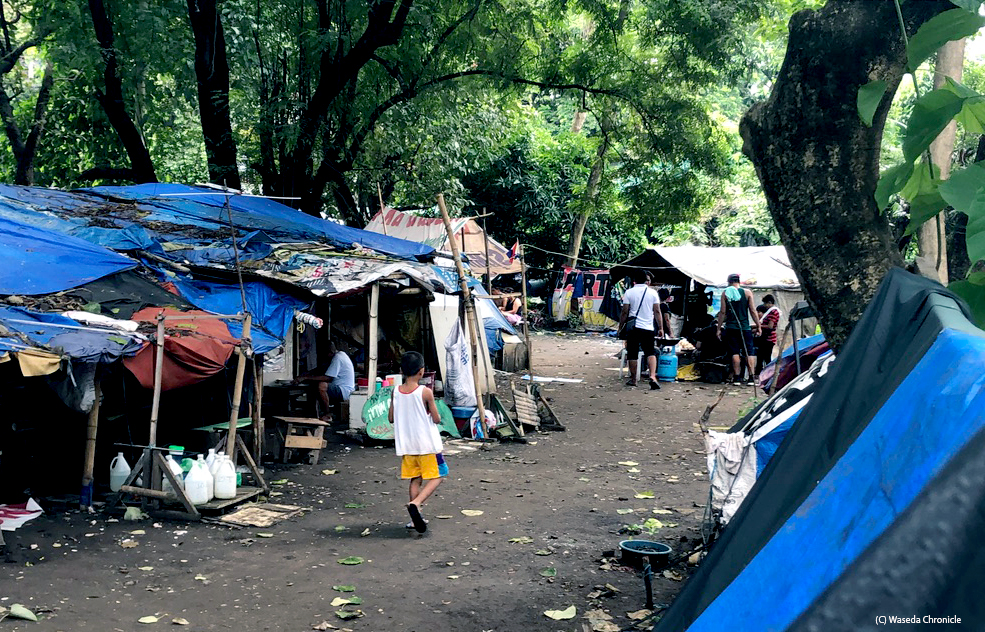 By the time I visited, only 35 union members remained at the camp.

They were preparing to leave on Aug. 20, to return home for the first time in nine months. The Department of Labor and Employment’s National Labor Relations Commission had ordered Sumifru to reinstate its fired workers. However, Sumifru was refusing to comply with the commission’s order. Although it was still unclear whether the union members would be able to return to work, they had decided to go home to Compostela.

When I arrived, Namasufa board of directors member Jamilla Seno (28) and two others were singing under a tent striped in red, white, and pale blue. Their song recounted the difficulties they had faced since being fired and losing their livelihoods.

The union members planned to upload the song to Facebook and were shooting a music video to accompany it.

Writing the lyrics themselves, they had completed a total of three songs in the styles of blues, folk, and march.

That day, they were singing the blues, with Seno as lead vocalist.

The title of the song was “Ama’t Inang Manggagawa (We Workers Are Fathers and Mothers).”

Seno planned to return to Compostela with the other union members. But she couldn’t go home, where her mother (57) and son (7) were waiting.

Two days earlier, at 9:27 p.m. on Aug. 16, Seno made a fake Facebook post to gauge the response to her homecoming.

“Glad to be back in my hometown. Thanks,” she wrote.

Two days later, on Aug. 18, Seno received a message from a friend in Compostela: “Two soldiers came looking for you this morning. They called you a red [communist].”

Seno was sure her post had somehow been leaked to the military. Her Facebook profile was set to “friends only.”

She spoke with her son over the phone and by text.

“Please come home. I miss you,” he said.

“Don’t forget to bring me a souvenir,” he said. “I want lechon manok [roast chicken].”

“Mom doesn’t have enough money for it,” Seno replied.

Lechon manok was her son’s favorite dish. While she still worked for Sumifru, Seno had often bought it for him on her twice-monthly payday.

She turned her face skyward as she recounted the conversation with her son, openly wiping away tears.

“Sumifru cares more about bananas than about us,” she said.

In order to avoid danger, Seno had only told her family she was leaving Manila “in August,” without giving a specific date.

An NGO that supports workers’ artistic projects had helped Seno and the others write their songs.

NGO core member and University of the Philippines researcher Edge Uyanguren (38) was present at the music video shoot the day I arrived at Namasufa’s camp.

For over six months, Uyanguren had listened to the union members’ stories through workshops and other activities, and he had helped shape their words into song. As he listened to Seno and the others sing, Uyanguren explained that the lyrics “express their feelings toward their parents and their wish for the safety of their families. You can really feel their pride as workers.” 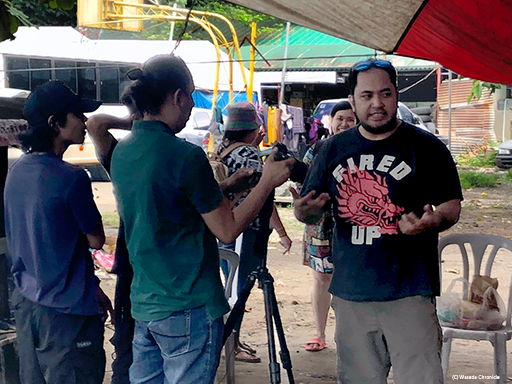 That morning, Uyanguren had interviewed two union members for the video. “They both cried as they said they wanted to go home to their families,” he said.

However, like Seno, these two also felt it was too dangerous to live with their families again, even after returning to Compostela.

“It hurts my heart”

I spoke with the two people Uyanguren had interviewed. The first was Namasufa board of directors member Dante Saminado (45).

“He asked me about my 8-year-old son and the rest of my family. I couldn’t help crying,” Saminado said. “It’s great that most of the other union members can return home, but I can’t. The main leaders are being targeted.”

Saminado’s relatives, who live nearby, take care of his 90-year-old mother.

“It hurts my heart,” he said, pounding his chest with a fist.

“We want Sumifru to use just a little of their earnings to raise our daily wage to 750 pesos (about $15). What we’re doing is legal. I’m not doing anything wrong, even if I’m killed for it,” Saminado said.

I also spoke with Allen Morales (48), treasurer of one of the individual unions that make up joint union Namasufa.

Last year, Morales and her husband, Manuel Llemit (52), were taken from their home to the military detachment and interrogated. She believes it was in February or March 2018.

The interrogation began around 10 p.m. Morales and her husband were asked things like “Why did you join the union?” They were allowed to go home around 3 a.m. Both that night and the following, soldiers forced entry into her home, saying they had “been told to check on them.” She worried the soldiers were going to plant a gun in her house, then arrest her for illegal possession of a firearm.

Neither Seno, Samindao, nor Morales can live with their families. Even after they leave Manila with the other union members, they will live apart.

Namasufa held an event on the evening of Aug. 19 in the Commission on Human Rights’ space located near their camp. The second-floor room’s 150 seats were all full, with many attendees standing as well. Students and members of the Congress of the Philippines, national labor unions, and groups that support ethnic minorities against oppression crowded in. Namasufa was breaking camp the next day, after nine months in the capital. The event, held on their last night in Manila, was to thank everyone who had supported them.

The 25-year-old Namasufa president, Paul John Dizon, stood to give a speech.

“Thank you for your support over the past nine months. We came to Manila by ship and bus to make our appeal heard by Sumifru, government agencies, and even the Office of the President. By coming here, we were also able to connect with many different groups.

“The martial law that rules our home island of Mindanao is affecting the struggle for workers’ rights. We have shared, particularly with youth, our message that what the government says [about Mindanao] isn’t true. On Dec. 10 last year, we celebrated Human Rights Day and called for martial law on Mindanao not to be extended. And yet it was.

“Although some say that martial law is improving Mindanao, that isn’t true. Life is getting harder and harder for peasants who don’t own land. The Lumad people, our brothers and sisters, face eviction and the closure of their schools.

“On Aug. 6, National Labor Relations Commission officers officially ordered Sumifru to reinstate us, but the company refused. The government is not responding to our demands, so of course we will continue the fight.

“Soldiers and police come knocking on our doors, telling us to make nice with the government — the same government that calls us traitors.

“Thank you for your support over the past nine months. In particular, thank you to the groups of young people who came to see us every day and offered their help. Thank you, everyone, thank you.”

Like the others, Dizon cannot return to his family. There isn’t even a home to return to, as it was destroyed by arson on Dec. 15, 2018 (described in this series’ third article).

Among the audience applauding at the end of his speech was Maria Fe Juson (28), Dizon’s girlfriend. They hadn’t seen each other since Aug. 16, when Dizon left to attend an international conference in Taipei, Taiwan. He had only just returned to Manila that night.

Dizon embraced Juson when they reunited at the camp. “I love you, I missed you,” he told her. 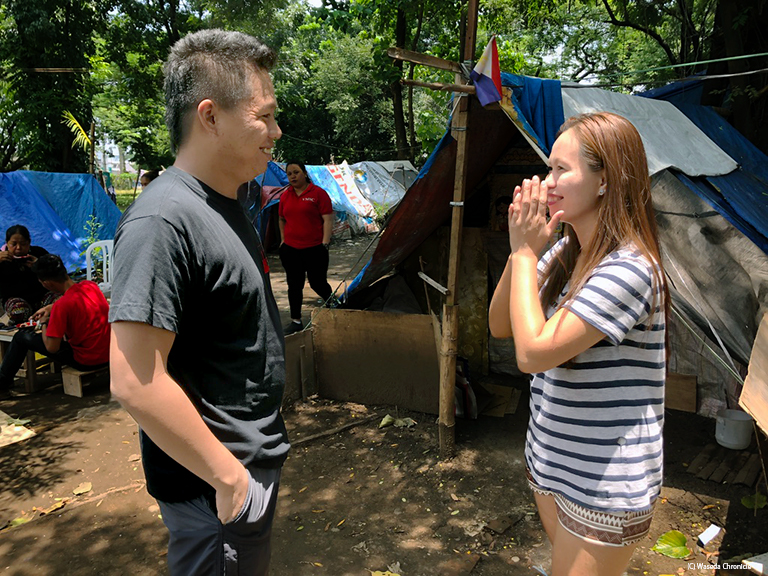 Namasufa President Paul John Dizon (left) and Maria Fe Juson. Juson demured when I asked to take a photo of the two of them the day they left Manila. Neither can return to their families. Photo taken on Aug. 20, 2019 in Quezon City, Metro Manila, Philippines (C)Tansa

Juson is yet another Namasufa member fired by Sumifru. She spent the past nine months in Manila with Dizon and the others, advocating to be reinstated by the company. Juson also serves as Namasufa’s assistant secretary. In order to keep herself and her family safe, she too will not return home. “Although my family worries about me, they don’t object to me dating Dizon. Being Namasufa’s president is a tough job, so I want to do all I can to support him,” Juson said.

Seno and the others premiered their song at the event. Her strong voice filled the room, and the performance was followed by loud, warm applause.

It was approaching midnight on Aug. 20, the end of Namasufa’s last day in Manila. The tents had been cleared. The union members, who had lived without employment or salary for the better part of a year, boarded a highway bus headed for Mindanao Island at 11:43 p.m. They reached Davao at 8 a.m. on the morning of Aug. 23.