Osaka Prefecture Believes that Daikin Knows that it’s the Primary Source of Pollution, but Daikin Denises (24)

However, Daikin stubbornly refuses to admit that it is the source of pollution. They only stated that “our company may be one of the causes” and even indicated the possibility that it was not the source of the contamination. Furthermore, during our interview, one of the management asked defiantly, “Is PFOA dangerous?”

Unless the cause of pollution is clarified, countermeasures cannot be implemented. Finally in the Diet, Daikin’s response to pollution came up for discussion.

The Minister of Environment leaves the Governor of Osaka to deal with Daikin.

On April 28, 2022, the Environment Committee of the House of Councillors deliberated on PFOA contamination in Settsu, Osaka, naming Daikin. Based on Tansa’s PFOA series, Yoshiki Yamashita of the Japanese Communist Party made an interpellation.

Regarding the amount of off-site PFOA emission from the Yodogawa Plant, Yamashita urged the government to ascertain the amount of PFOA emitted, pointing out that “if we do not know, we will not be able to take countermeasures.”

Tsuyoshi Yamaguchi, Minister of the Environment, gave an answer.

“I wonder what kind of politics the Governor of Osaka is doing. I would like him to properly discuss and deal with it. ”

Yamashita, refusing to back down, responded.

“I want Osaka Prefecture to work on the matter of Osaka and Settsu City, and we will give you proper advice.”

It was the Ministry of the Environment that conducted a nationwide survey of PFOA in 2020 and announced that the groundwater in Settsu had the highest concentration of PFOA in the country. Even so, Yamaguchi, the Minister of Environment, forced the prefectural governor, Hirofumi Yoshimura, to take action. 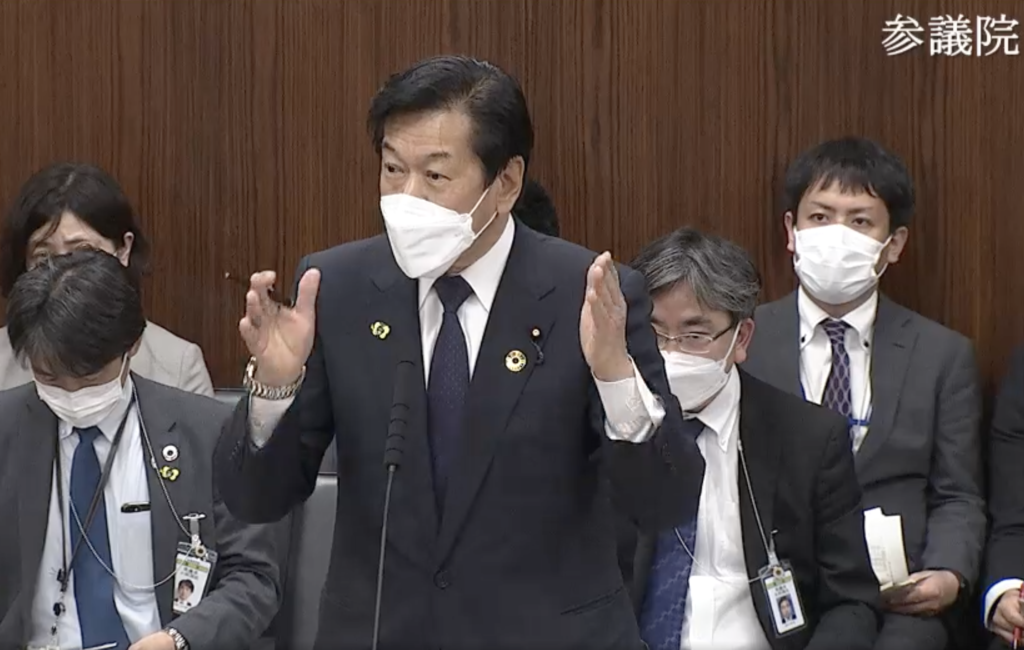 In response to the Minister of the Environment’s statement at the Diet, I requested an interview with Osaka Governor Yoshimura. However, through the secretarial section, Yoshimura entrusted the response to the Osaka prefectural government’s chemical substance countermeasures group, business guidance section, environmental management office, saying, “The section in charge can handle it.” The department’s website describes the work as follows:

The office guidance section regulates and provides guidance to factories and other facilities that emit pollutants based on laws and ordinances in order to prevent air pollution, water pollution, chemical substances, and soil pollution.

At 1:00 p.m. on June 3, Makoto Watanabe, editor-in-chief, and I arrived at the 21st floor of the prefectural government building, Sakishima, when the following three people from the business guidance section arrived.

When we exchanged business cards, section chief Hagino asked, “Are you visiting from Tokyo?”

I was surprised. Today’s interview stems from deliberations in the Diet. The Minister of the Environment pointed to Governor Yoshimura and asked him to deal with Daikin. The documents distributed at the Diet also included Tansa’s credit. However, the section manager assigned by the governor to be interviewed had not read Tansa’s report.

I started interviewing while feeling uneasy, but my hunch was right. They didin’t seem to be on the same page. I asked them if they had watched the discussion in the Diet prior to the interview.

Assistant section chief Kubota answered, “Yes I did. But I only heard of it so I’m not fully aware.”

This was troublesome. During the discussion in the Diet, Minister of the Environment Yamaguchi was asked to ascertain the amount of PFOA released outside the Yodogawa Plant, and entrusted the prefectural government to handle the situation. I asked if the prefecture kept track of emissions.

How come they didn’t know the amount of PFOA emission? As discussed in the Diet, unless we know how much PFOA has been discharged outside the premises, we should not be able to determine Daikin’s responsibility or take measures against pollution. When I pointed that out, section chief Hagino replied.

“Even if we don’t know, Daikin is the primary cause, so we are discussing it with the three parties…”

The three parties that Hagino refers to are Daikin, Osaka Prefecture, and Settsu City. The three-party conference, which began in 2009, is still ongoing, and has been held 22 times. They have been discussing countermeasures against PFOA pollution. The Business Guidance Division participates representing the prefectural government,

However, Hagino’s answer contained a decisive contradiction. Daikin did not recognize itself as the “primary cause.”

On the contrary, Daikin held the opinion that, “Our company may be one of the causes,” indicating the possibility that it may not even be the cause, as we have reported before. The day before my interview with Osaka Prefecture, I had a conversation with Daikin’s public relations department. Even at that time, Daikin remained at the position of “a possible cause.”

Editor-in-Chief Watanabe told the three members of the business guidance section, “Daikin doesn’t think it is the primary cause.”

“No, Daikin does think it is.”

Watanabe said, “Then please call them now and check. It’s different from the answer we got from Daikin yesterday.”

“Daikin has already acknowledged that.”

Whether Daikin admits itself as a polluter is an important issue. If they do admit that as the Business Guidance Division claims, we can start talking about apology and compensation to the residents. The editor-in-chief and I repeatedly asked the three people sitting in front of us to confirm with Daikin. It was just a phone call away.

Still, Kubota and others refused, saying, “There is no need for confirmation,” and insisted that Daikin recognized itself as the “primary cause.”

Yoshimura, the Governor, entrusted the matter to the office guidance section, saying, “The department in charge can handle it.” However, Yoshimura’s judgment was wrong. I told the three people in the business guidance section that I would submit a letter of protest to the Governor, and left the prefectural office.

Four days after the interview with the prefecture, Watanabe and I interviewed Daikin executives at the headquarters. The following three people responded to the interview.

I told them that the prefectural office guidance section said, “Daikin considers itself to be the primary cause of pollution.”

In response, Daikin executives clarified that the prefectural government’s position was wrong. Executive Officer Hiraga, who was shown a confidential document that I had obtained, said on the spot that “our company is definitely one of the causes,” instead of their prior statement “possibility of being one of the causes.” But still insisted that “it’s not the primary cause.”

However, Daikin and Osaka Prefecture have been discussing PFOA contamination for 13 years in the three-party conference that began in 2009, including the city of Settsu. How could there be any disagreements about the causes of pollution? I asked the executives one last time.

“Are you sure that Osaka prefecture is wrong?”

The officers answered in unison.

The Osaka prefectural government’s business guidance section repeatedly made statements that were not true, and even when we asked for confirmation, they neglected to do so. 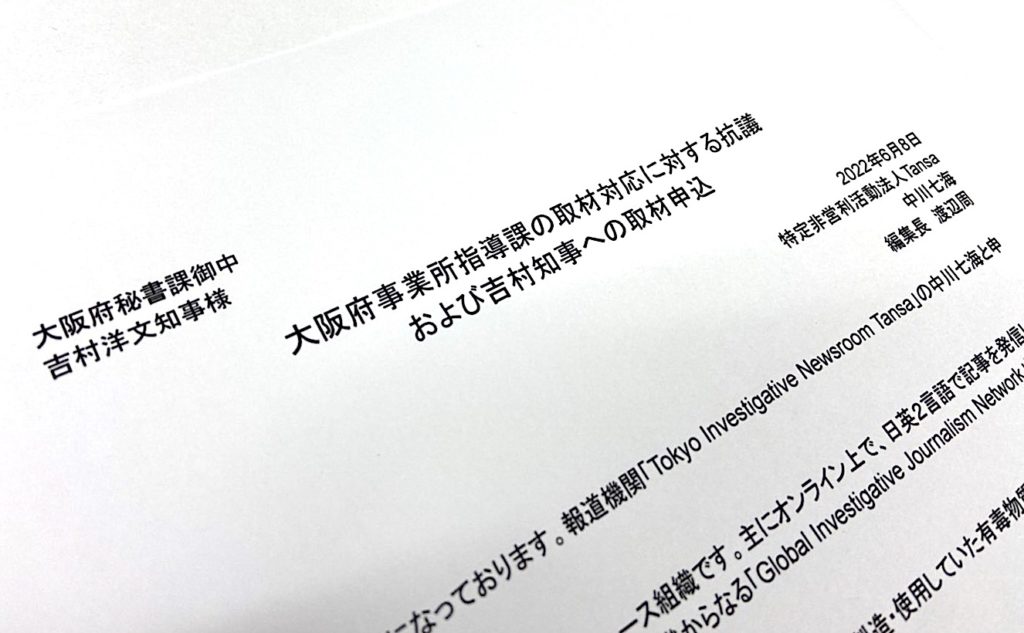 Two days later, I received an email from Kubota.

Regarding the interview request received by the Governor of Osaka Prefecture on June 8, it will be handled by the Business Guidance Division, so we will answer.

As I have been asking since the interview the other day, I need you to check with Daikin and confirm that “both Osaka Prefecture and Daikin are in agreement that Daikin is the primary cause of pollution.”  Unless you clarify this, the interview will not proceed. Regards.

Kubota’s answer was still a refusal to confirm with Daikin.

Osaka Prefecture considers Daikin to be the primary source of pollution and has requested countermeasures, and Daikin is currently implementing countermeasures in response to the request. As Osaka Prefecture, we do not think it is necessary to confirm the company’s recognition again. As I have told you before. Regards.

(Originally published in Japanese on July 15, 2022. Translation by Mana Shibata.)