Neither Google nor Apple responded to questions regarding apps containing illegal images being available via their app stores. 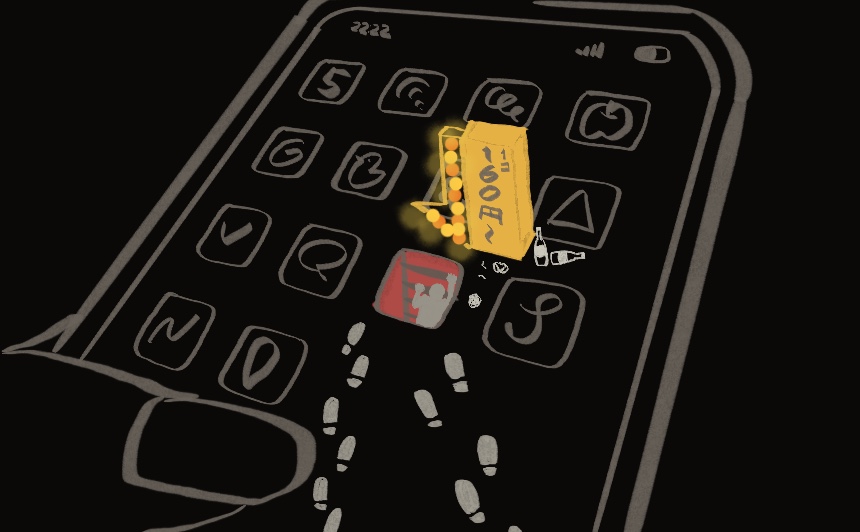 Individuals’ photos and videos are being bought and sold online as “sexual products” without their knowledge. Once uploaded, they spread rapidly, never to disappear.

One victim suddenly started receiving messages from strangers, who told her “You naughty photos and videos have leaked.” Her cloud account had been hacked. Although she consulted with the police, they claimed their hands were tied. She says, “If I think about it, I can’t go on with my life.”

Another victim had videos posted by an ex-boyfriend “for his own amusement.” Even three years later, the videos continue to spread online. She once tried to commit suicide.

These victims’ photos and videos were bought and sold via smartphone apps.

Apps called “Video Share” and “Album Collection” are among the most popular for these purposes.

Video Share has been available in Google and Apple’s app stores, while Album Collection is available in the Apple store and ranks among its most popular apps.

How it is possible that apps full of criminal activity were offered — even highlighted as popular products — in the Google and Apple stores? 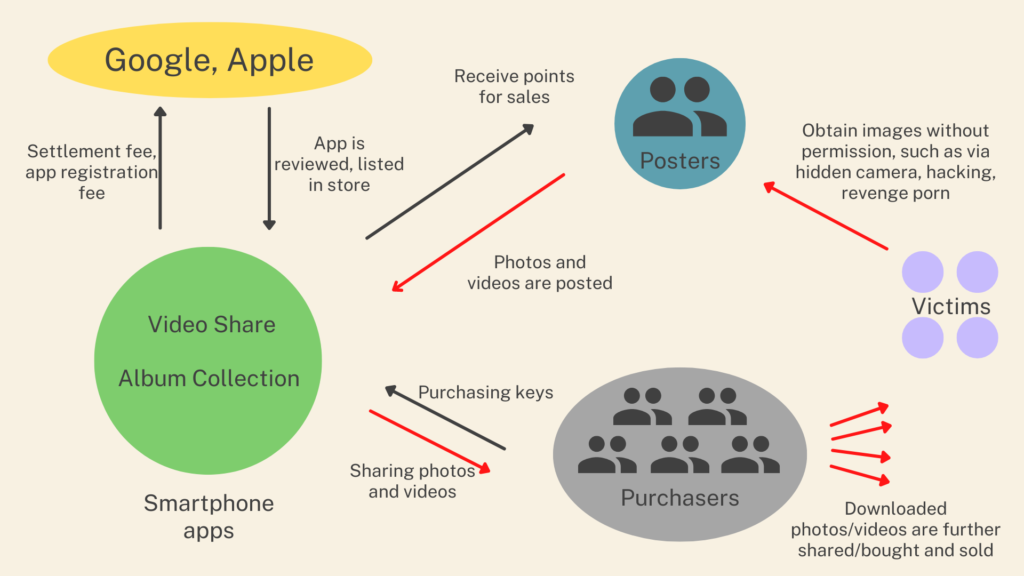 Overview of the structure of harm caused by the apps. Red arrows indicate the flow of photos and videos.

Apps offered in Apple’s App Store and Google’s Google Play have passed the companies’ respective screening processes. App operators must also pay a registration fee to have their app offered in each store.

The exact number of users for Video Share and Album Collection is unknown. The following are usage figures currently known, based on web archiving services and other sources.

On its site, the App Store lists the top 100 apps in each category. Of these, Album Collection ranked 94 in the Photo & Video category as recently as Nov. 18 and was displayed on the site.

Why are these apps so popular? The written descriptions for Video Share and Album Collection don’t give anything away. They just seem like run-of-the-mill apps for sharing files with large amounts of data.

They are described as follows in the App Store.

Video Share: “Easy to share large numbers of photos and videos at once!” “No registration or login required!”

Album Collection: “It’s quite a hassle uploading photo and video files one by one, isn’t it! With this app, you can send tons of photos at once!”

But behind these unassuming exteriors, sexual photos and videos are being bought and sold.

My investigation focused on the two apps’ common mechanism: Users need to purchase “keys” in order to access the photos and videos stored in locked folders.

Opened folders are automatically downloaded and saved in the app. Once downloaded, they can be viewed repeatedly.

If the apps were designed for sharing innocuous photos and videos, it would make more sense to charge based on upload capacity, similar to other cloud services and file sharing sites.

However, these apps make users purchase keys for individual folders containing photos and videos. Their operators always intended the apps to be used to exchange sexual content.

“Retaliation such as criminal penalties”

Some users had posted warnings about the apps’ true contents, which are at odds with their seemingly innocent exteriors.

“Child pornography and other illegal pornography is being shared through this app. It’s very unfortunate that people download it out of curiosity, then become concerned and look online for information [as to whether they have accidentally committed a crime] and how to handle it. If you are using or thinking of using this app, you should stop immediately if you want to continue your life as before. Even if you don’t fall under the care of the police, you will always be worried and won’t be able to live a normal life. I don’t recommend it, from a risk aversion standpoint.”

A review dated June 1, 2022, also raised the issue of criminality.

“This is criminal. If you search for the name of this app on Twitter or other social media, you will find countless filenames of uploaded videos of child pornography, etc. I ask the managers for immediate retaliation, such as criminal penalties, for users who post child pornography and other criminal videos.”

Of the 10 reviews written about Video Share, six pointed out that illegal pornography was being shared through the app.

There were also undated reviews of Album Collection, posted on another site that introduces smartphone apps, that suggested the app was being used to exchange illegal videos.

Title: A den of child pornography

“I really hope they get caught.”

Do Google and Apple see themselves as complicit in the illegal activity taking place through these apps? How do they view their own responsibility therein? On Sept. 5, I sent questions to the Japanese branches of both companies, addressed to the companies’ presidents.

Eight days later, on Sept. 13, a representative from Google’s public relations department named Kato replied by email, saying he was “checking the questions” and asked me to wait until the weekend for a response.

The same day, Google withdrew Video Share from its app store. However, the web version can still be found via a Google search.

On Nov. 3, I sent additional questions to both companies but received no response.

As of Nov. 21, both companies are still ignoring my questions.