In early August 2021, I received a text from an acquaintance working as a pharmacist in Osaka.

“Although I haven’t received even my first shot of the COVID-19 vaccine, the priority spots reserved for healthcare workers have been discontinued.”

In their job as a pharmacist, my acquaintance has direct contact with nearly 100 people every day, including both patients who come to fill their own prescriptions and family members of COVID-19 patients recovering at home.

Despite this, my acquaintance was unable to make a vaccination reservation as a healthcare worker. “My greatest fear is that I contract COVID-19 and inadvertently infect my patients,” they stated. 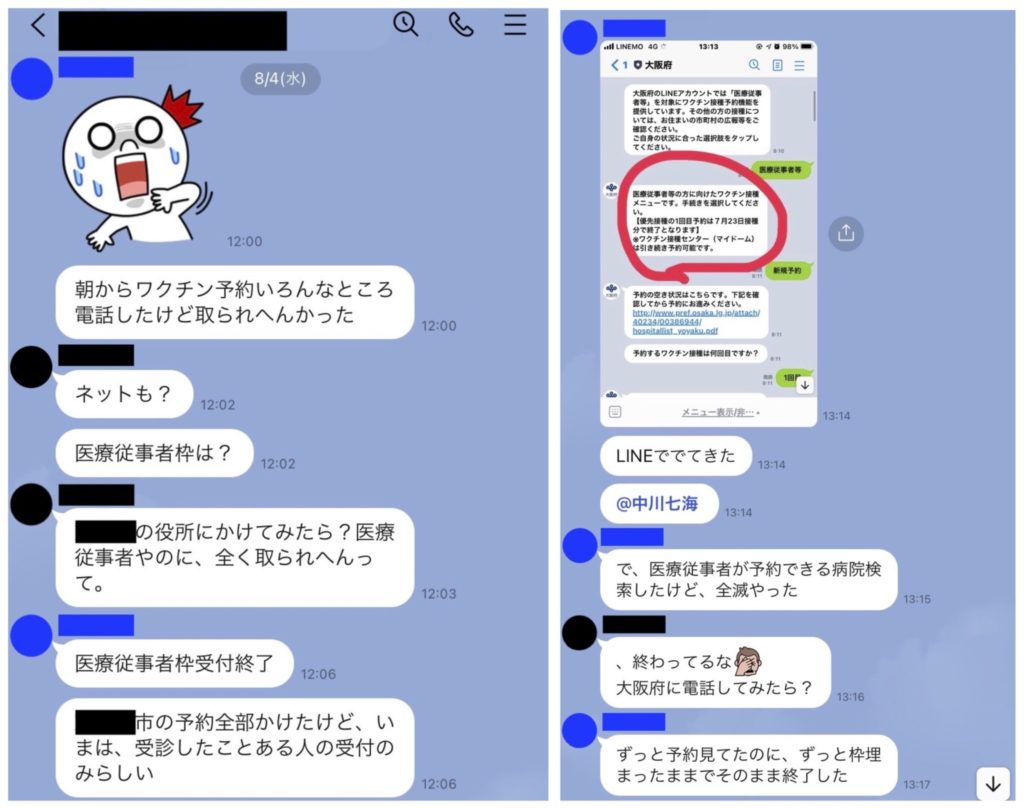 A group text conversation that includes the author and the acquaintance (in blue).

Finding time outside of work

My acquaintance works at a pharmacy in Osaka Prefecture. A priority vaccination ticket for healthcare workers arrived at their house in early May 2021, and they began trying to make a reservation that very day.

There were two ways to make an appointment: using the messaging app reservation system developed by the prefectural government, or calling the relevant healthcare facility directly. No matter which method they tried, however, all the appointments were already booked.

Although they tried to make an appointment during the following days, every attempt proved fruitless. Inputting the necessary information took time, and failing to get a reservation meant starting over from the beginning of the online form. This lengthy process meant days were spent trying to access the system, as they tried repeatedly both from home and during breaks at work.

Toward the end of May, my acquaintance became occupied with work and family affairs. There were two weeks in which they were unable to check the messaging app reservation system.

One day in June, their colleague divulged a piece of shocking information: “I heard that at the end of May, 100 spots opened up out of the blue on the app reservation system.”

My acquaintance hadn’t heard anything about this from the prefectural government. According to their colleague, finding out about these spots had been a lucky coincidence, and they, too, had filled up quickly.

While waiting to make a vaccine reservation, my acquaintance continued working at the pharmacy.

Until the end of May, they were posted at a pharmacy across the street from a large general hospital, and patients would come in with prescriptions from said hospital.

Almost every day, family members of COVID-19 patients recuperating at home would come in as well. They came in to buy Acetaminophen, an antipyretic thought to be effective against the virus. My acquaintance had to carefully check each label so that customers would not mistakenly buy Loxonin, a painkiller harmful to COVID-19 patients.

Starting early June, they were transferred to a pharmacy adjacent to a cluster of clinics. Here, elderly patients with repeat prescriptions and patients with COVID-like symptoms — coughs, fevers — but who had not taken a PCR test would often come by. Because of the influx of elderly patients, my acquaintance often had to lean close to their ear and speak in a loud voice to be heard.

On Aug. 4, 2021, nearly three months after having received the priority vaccination ticket, my acquaintance began trying to make a reservation for the umpteenth time. Unable to get through on the app, they tried calling the healthcare facility directly.

On the phone, however, they were told that priority vaccinations for healthcare workers had been discontinued.

Surprised, they opened the app reservation form. There, it read that healthcare workers who had not received their first vaccination by July 23 were not eligible to receive priority vaccinations. My acquaintance was shocked.

“I wasn’t aware that there was a cutoff date. I had failed to make a reservation multiple times, but had I known that there was a deadline, I might have spent more time attempting to get one,” they stated.

Health ministry: “Please make reservations on your own”

Medical personnel working in hospitals and clinics can easily make reservations for vaccines at their respective medical institutions. However, this is not the case for pharmacists working in pharmacies unaffiliated with a specific medical institution. Just how many people were in a similar position to my acquaintance? To find out more, I contacted the Japan Pharmacists Association. I spoke over the phone with Yasunori Tajiri, the vice president of the association.

“Out of over 100,000 pharmacists, there may be one or two, maybe five or ten, who have been overlooked, but most of them should have received vaccinations,” he explained.

“I get there are times when appointments cannot be made due to work commitments, but it’s my understanding that it’s normally the responsibility of the workplace to set flexible working hours so that employees can get vaccinated. I myself was unable to make a reservation in Tokyo, so I received my vaccination in Kyushu, where the pharmacy I run is located.”

I decided to make further inquiries to the Osaka Prefectural Government, where my acquaintance resides.

A representative from the vaccination promotion division of the health and medical care department explained that the decision to discontinue the program on July 23 was “in accordance with a notification from the national government.”

Next, I contacted the Ministry of Health, Labour and Welfare. A representative from the health bureau’s vaccination office acknowledged that some healthcare workers had been unable to obtain priority vaccination appointments. With regard to the announcement by the National Governors Association, they stated they “did not understand the basis on which the association determined that the vaccination rate was 100%.” 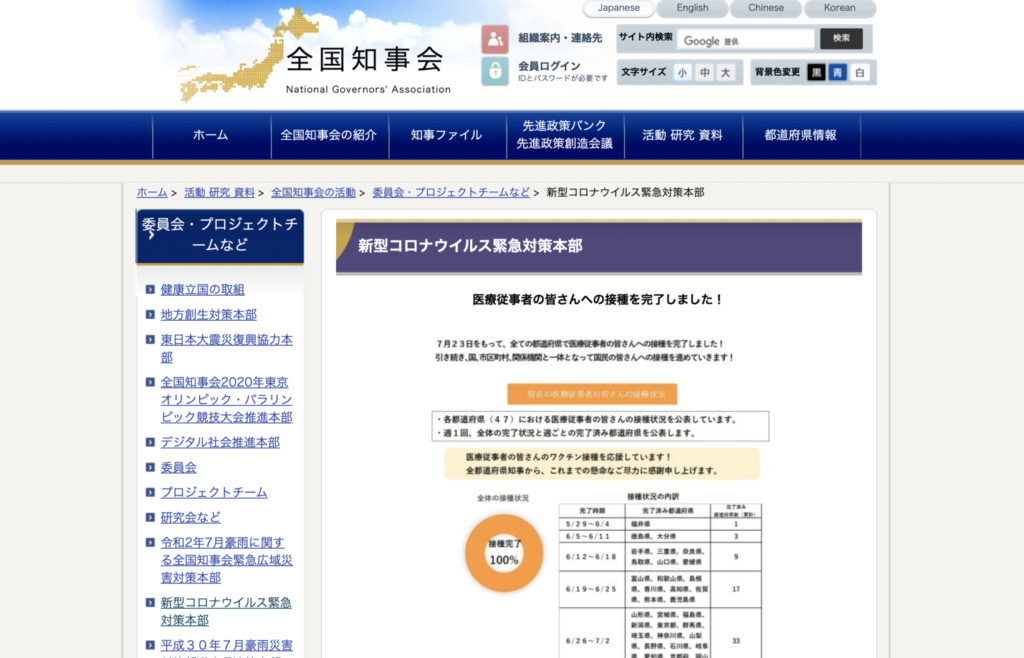 National Governors' Association announcement that 100% of priority vaccinations for healthcare workers were completed.

When asked what these overlooked workers were meant to do, they replied, “Please make an appointment on your own. I cannot answer any more than that.”

My acquaintance was finally able to make a non-priority reservation on Aug. 16, 2021. Their first appointment was on Aug. 25, the second on Sept. 22.

(Originally published in Japanese on Sept. 10, 2021. Translation by Wakaba Oto.)